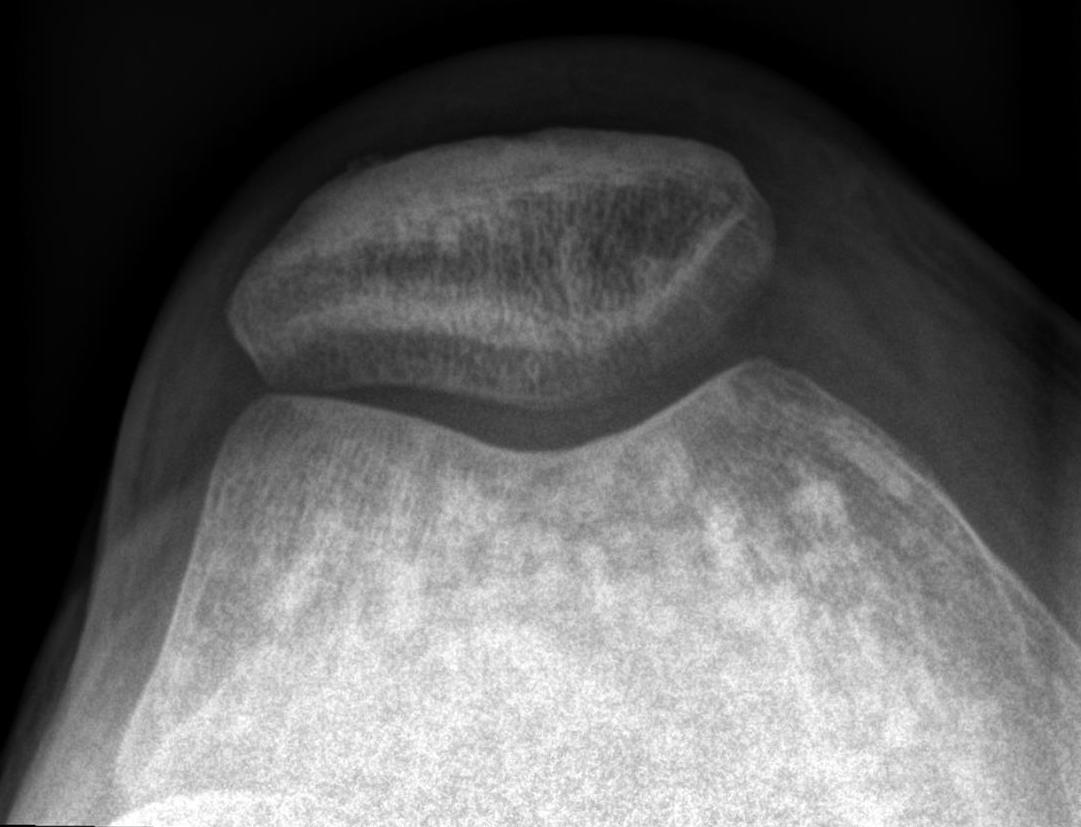 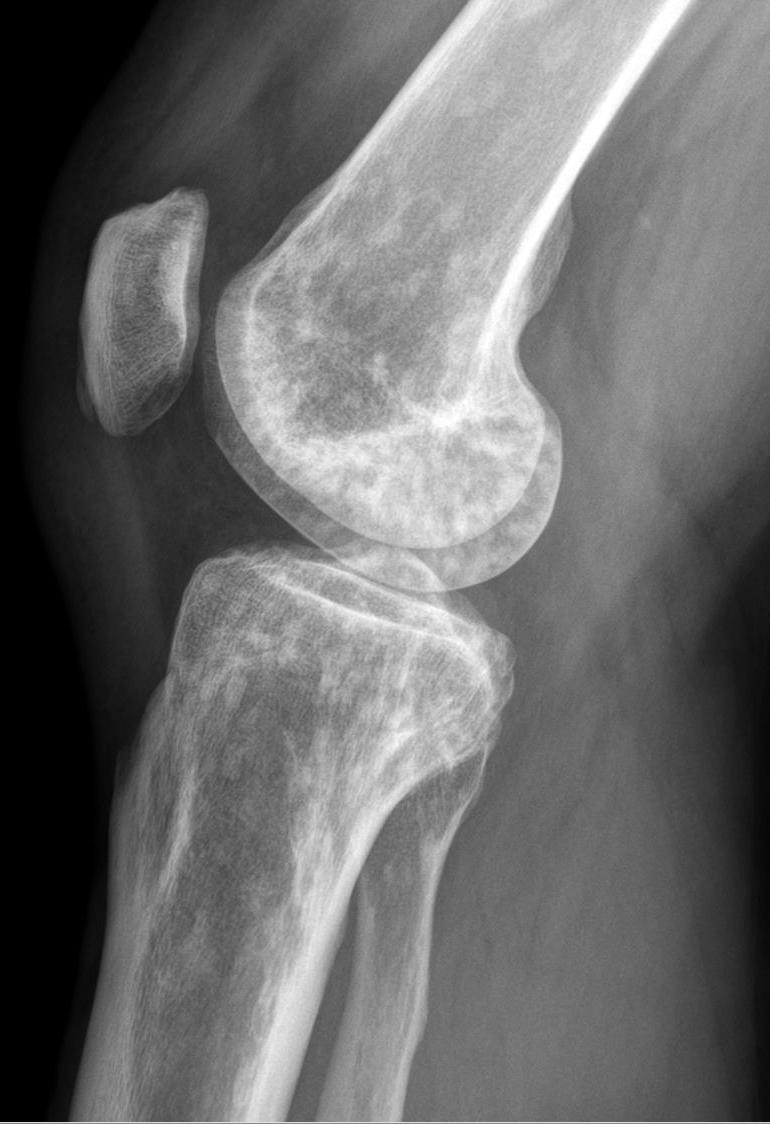 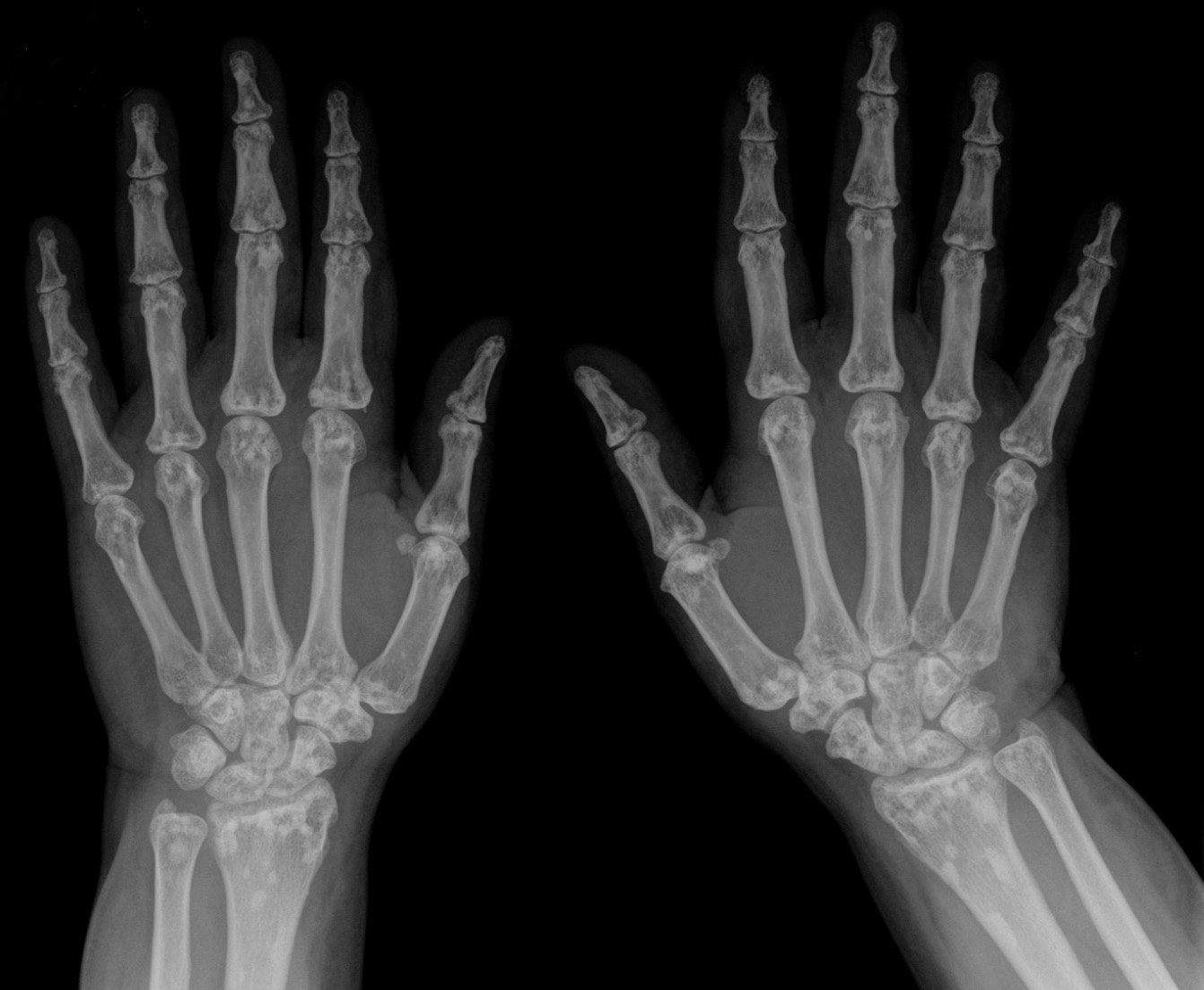 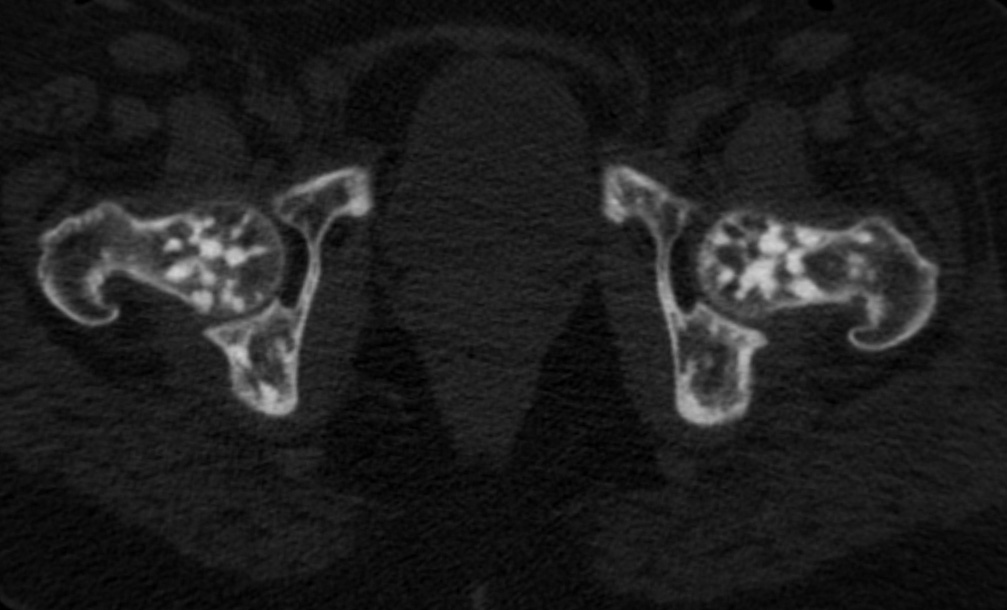 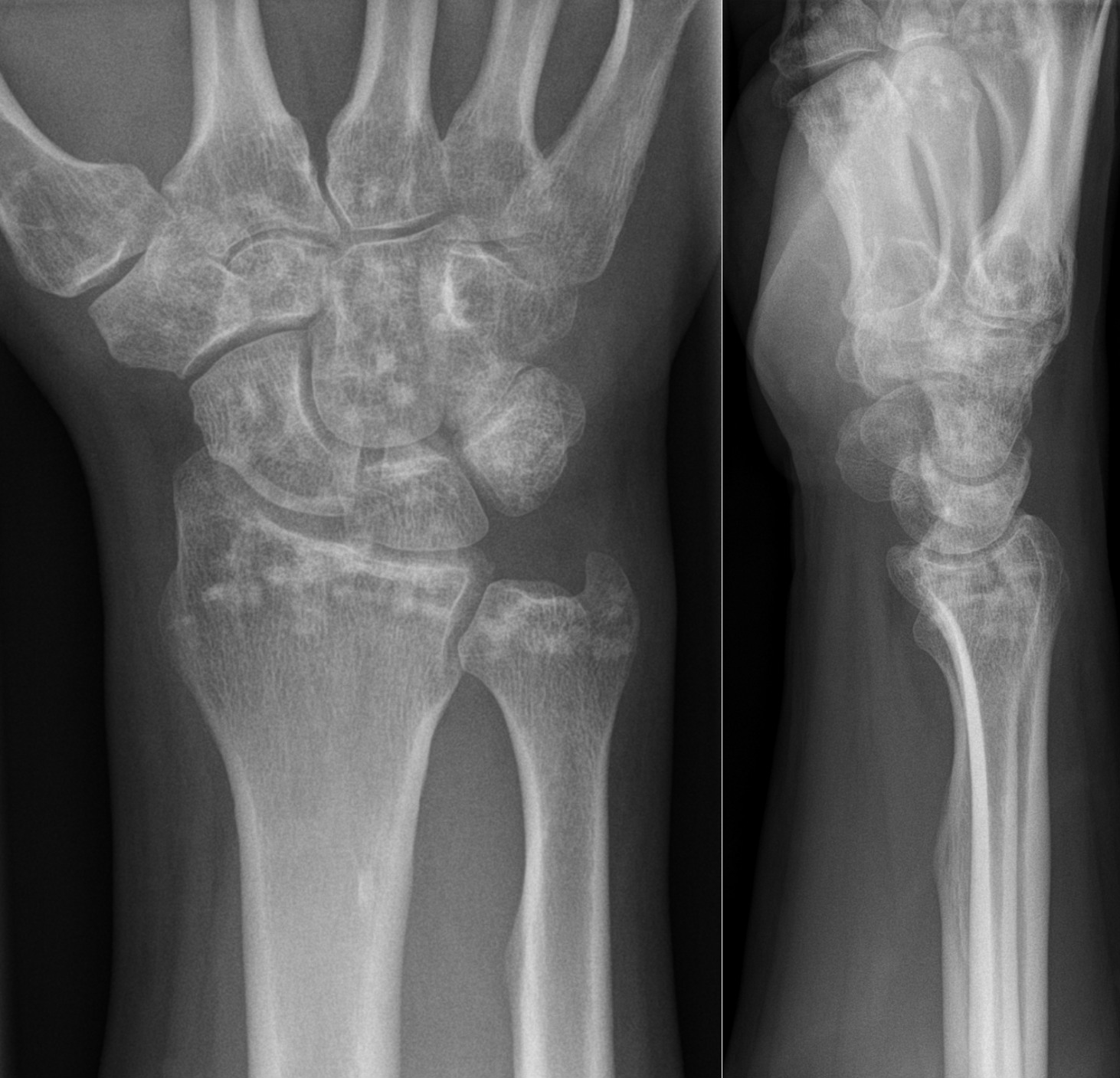 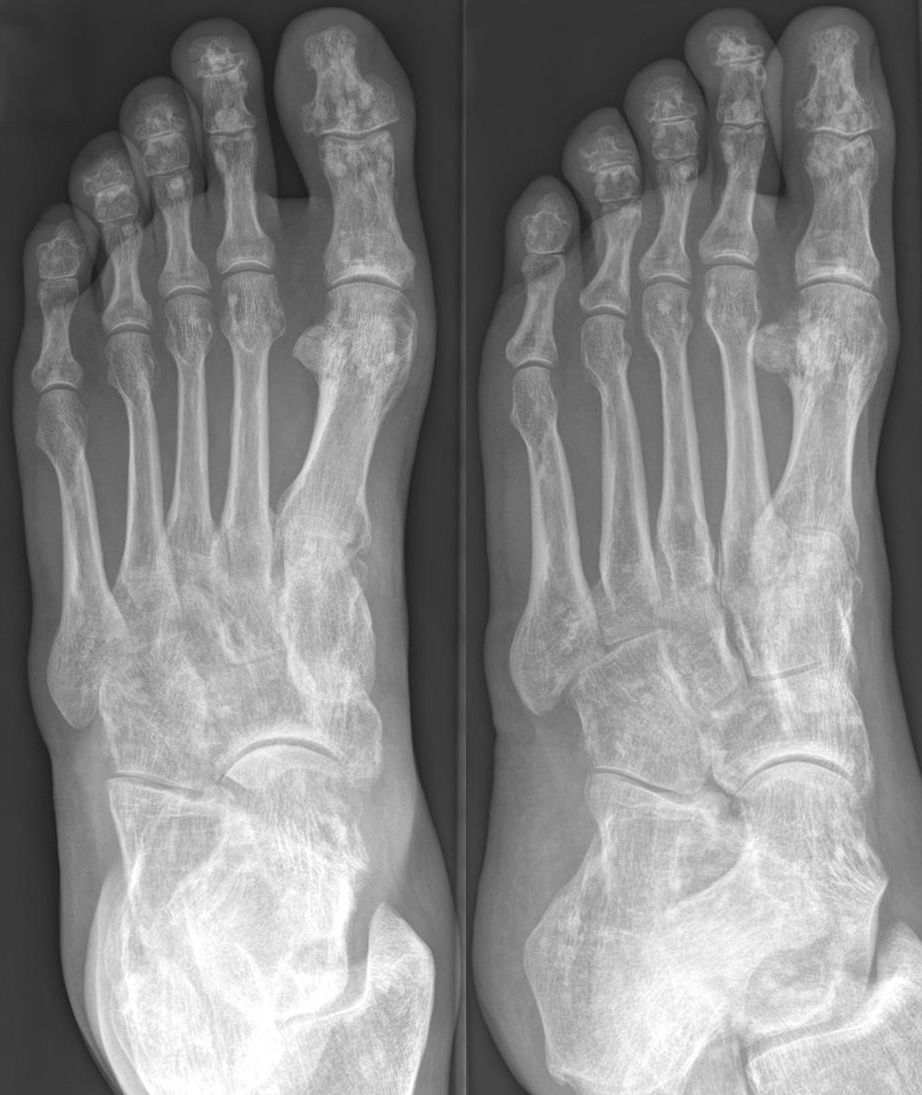 Osteopoikilosis is a sclerosing bony dysplasia characterized by multiple benign enostoses. It is a rare inherited benign condition incidentally found on skeletal x-rays. Its importance is predominantly in correct diagnosis so that it is not mistaken for pathology.

The bone islands of osteopoikilosis develop during childhood and do not regress and therefore are seen in all age groups. There is no gender predilection.

Osteopoikilosis is inherited as an autosomal dominant disorder .

The condition is asymptomatic and does not degenerate into malignancy. Bone strength is normal.

Histologically, the bone islands found in osteopoikilosis and in sporadic enostoses are merely patches of dense cortical-like bone complete with haversian canals located within the spongiosa, often just deep to the cortex .

Osteopoikilosis is often found concurrently with osteopathia striata, and melorheostosis, and it is thought by some that they represent a spectrum of the same condition termed mixed sclerosing bone dysplasia. Indeed recent genetic evidence suggests that these conditions are related to a loss of function mutation of the LEMD3 gene .

The bone islands of osteopoikilosis are typically clustered around joints and align themselves parallel to surrounding trabeculae. Thus they are predominantly longitudinal in the areas of well-defined linear trabeculae, while more-or-less spherical where the trabeculations are not as well organized linearly. An example of the former is any of the five major groups of trabeculae seen in the femoral head and neck .

Most lesions are found in the appendicular skeleton and pelvis. The axial skeleton is largely spared. It is rare for the skull vault to be involved .

Appearances on MRI are the same as individual bone islands. Each lesion is small and dark on both T1- and T2-weighted images, as it is composed of mature dense bone .

A bone scan should not demonstrate any increase in uptake, useful if metastatic disease is considered in the differential.

Osteopoikilosis is one of the skeletal “don’t touch” lesions.

When seen throughout multiple bones with characteristic appearances, there is little differential. When only a few lesions are seen on an isolated film, the differential includes: