Osteoid
osteoma of the fibula in computed tomography (bone window). The nidus is clearly visible. (The small point dorsally in the tibia is not an OO, but a vessel canal, which is typical at this point.)
Wikipedia • CC BY-SA 3.0 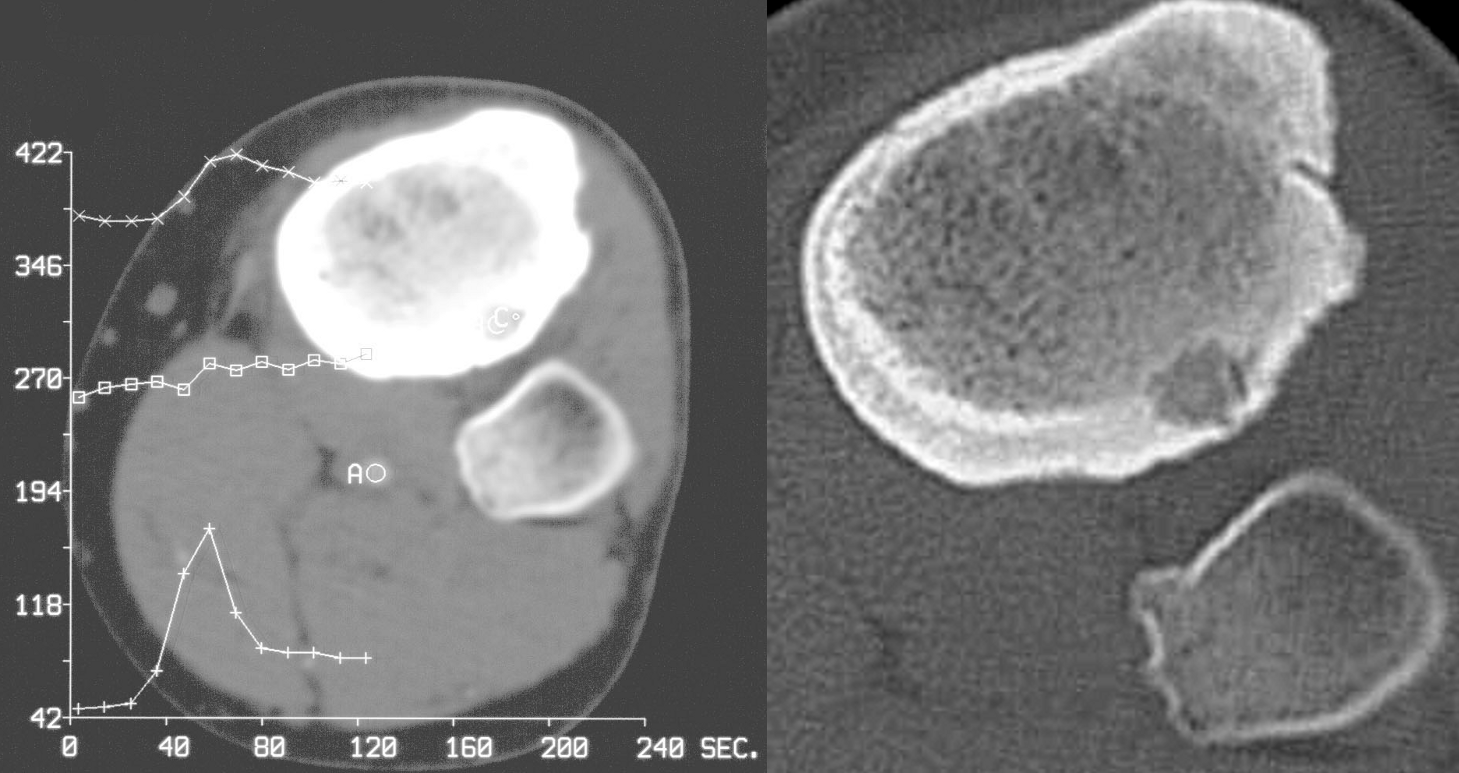 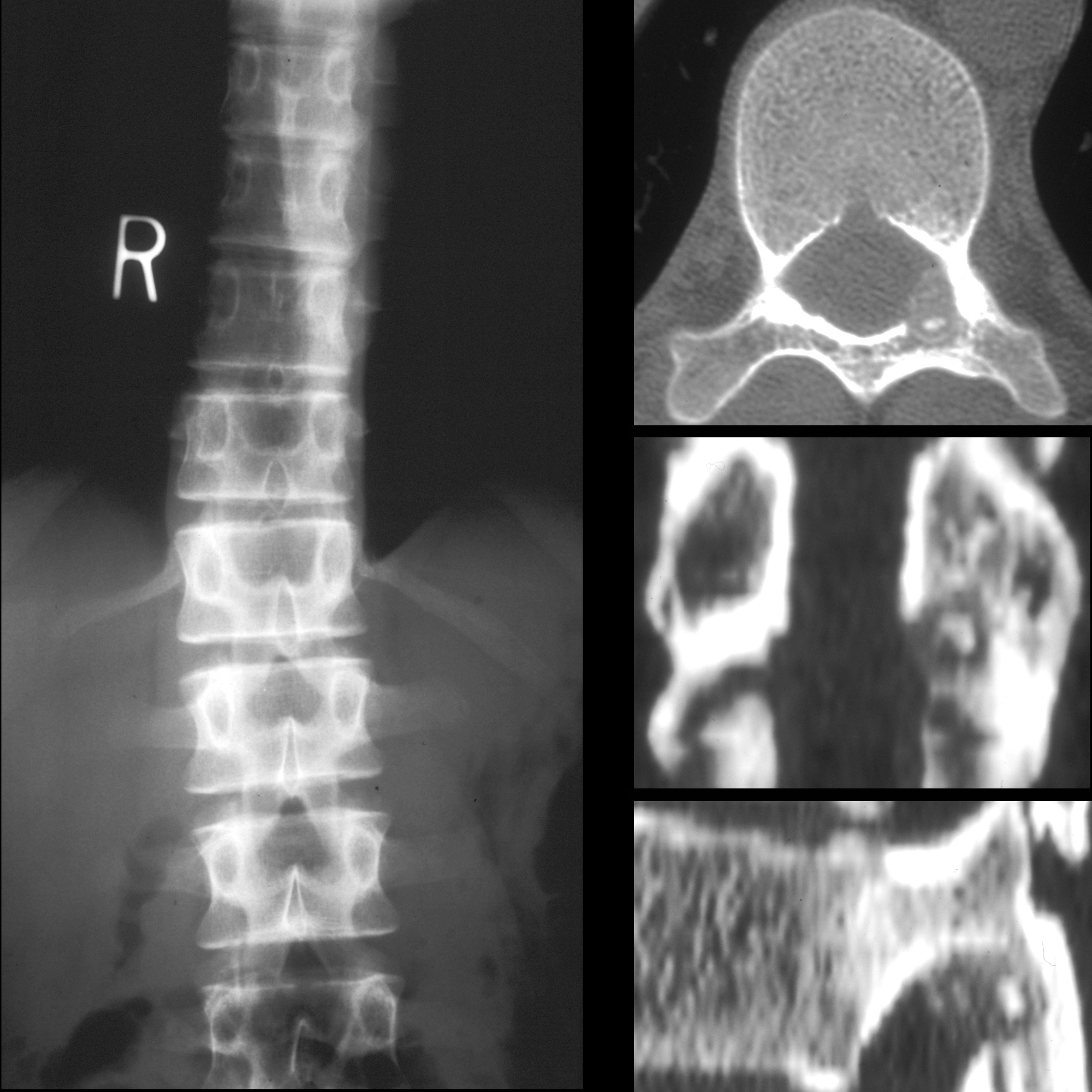 Teenager with
back pain and scoliosisAP radiograph of the thoracic spine shows an indistinct margin of the left T10 pedicle and mild scoliosis convex right. Axial CT without contrast of the T10 vertebral body with coronal and sagittal 2-D reconstructions shows a small round lucent nidus with central calcification in the left T10 pedicle surrounded by sclerosis.The diagnosis was osteoid osteoma.
pediatricimaging.org • CC-by-nc-sa 4.0 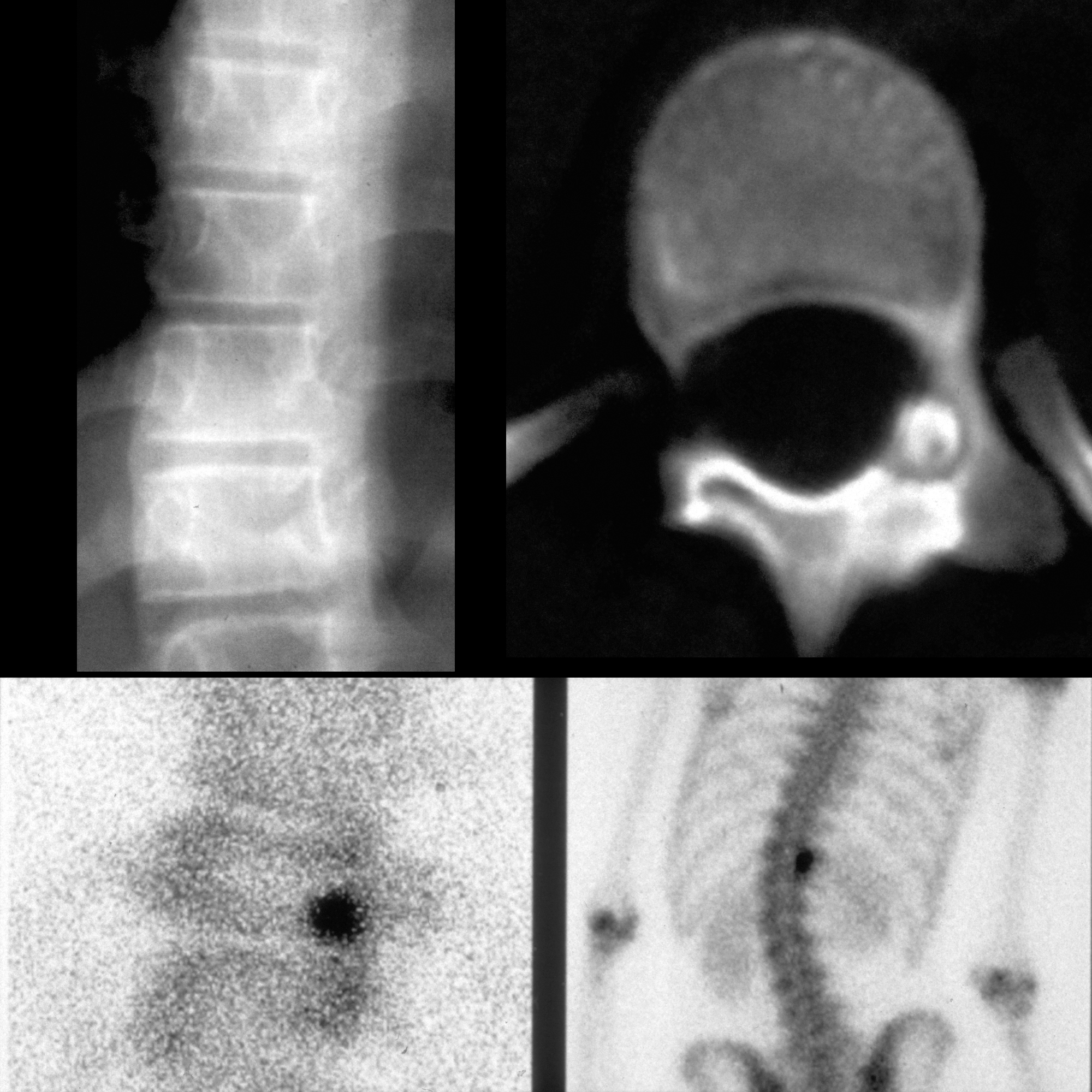 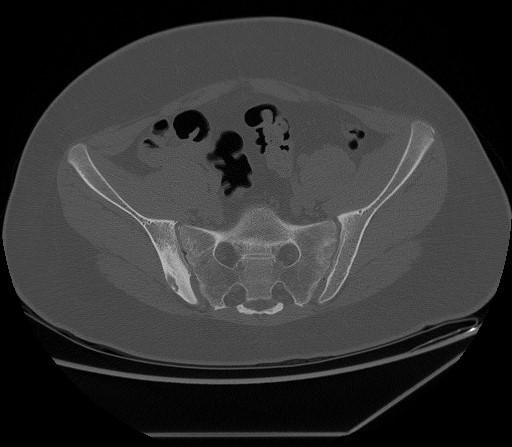 Osteoid osteomas are benign bone-forming tumors that typically occur in children (particularly adolescents). They have a characteristic lucent nidus less than 1.5 or 2 cm and surrounding osteosclerotic reaction, which classically causes night pain that is relieved by the use of salicylate analgesia, e.g. aspirin.

Osteoid osteomas are usually found in children, adolescents, and young adults, between the ages of 10 and 35 years .

Classically patients present with nocturnal pain and is relieved by salicylates (e.g. aspirin).

When in the spine they are a classic cause of painful scoliosis, concave on the side of lesion. This typical presentation is seen in over 75% of cases .

Soft tissue swelling may occur (see case 4) and if close to a growth plate, accelerated growth may be evident , presumably related to hyperemia.

When the lesion is intracapsular, the presentation is more atypical, and more likely mimics inflammatory arthropathy or synovitis. Joint effusion is often present .

An osteoid osteoma is composed of three concentric parts :

Most osteoid osteomas occur in long tubular bones of the limbs (especially the proximal femur), but any bone may be involved.

Furthermore, osteoid osteomas are usually cortical lesions but they can occur anywhere within the bone including medullary, subperiosteal (most commonly in the talus), and intracapsular .

It is important to remember that the sclerosis is reactive and does not represent the lesion itself. The nidus is usually <2 cm in diameter, and is typically ovoid. It may have a central region of mineralization .

May be normal or may show a solid periosteal reaction with cortical thickening. The nidus is sometimes visible as a well-circumscribed lucent region, occasionally with a central sclerotic dot.

CT is excellent at characterizing the lesion and is the modality of choice. It typically shows a focally lucent nidus within surrounding sclerotic reactive bone. A central sclerotic dot may also be seen.

Skeletal scintigraphy will show typical focal uptake and at times will show a double density sign (also known as the less catchy hotter spot within hot area sign) which if present is highly specific and helpful in distinguishing it from osteomyelitis. The central focus showing intense uptake within a surrounding lower - but nonetheless increased - uptake rim.

On ultrasound, focal cortical irregularity with adjacent hypoechoic synovitis may be present at the site of intra-articular lesions. The nidus can show hypoechogenicity with posterior acoustic enhancement. Ultrasound may be able to identify the nidus as a hypervascular nidus on Doppler examination .

Although MRI is sensitive, it is non-specific and is often unable to identify the nidus. The hyperemia and resultant bone marrow edema pattern may result in the scans being misinterpreted as representing aggressive pathology .

The signal intensity of the nidus is variable on all sequences as is the degree of contrast enhancement .

The lesion is benign and treatment has traditionally been with surgical resection. Historically, this has, on occasion, been difficult because of the inherent inability to locate the nidus during surgery . However, percutaneous radiofrequency ablation under CT guidance is being used with increasing frequency .

There is growing evidence, that osteoid osteoma naturally resolves spontaneously with time and can be treated conservatively with NSAIDs in certain groups of patients . The average time to resolution is 33 months.