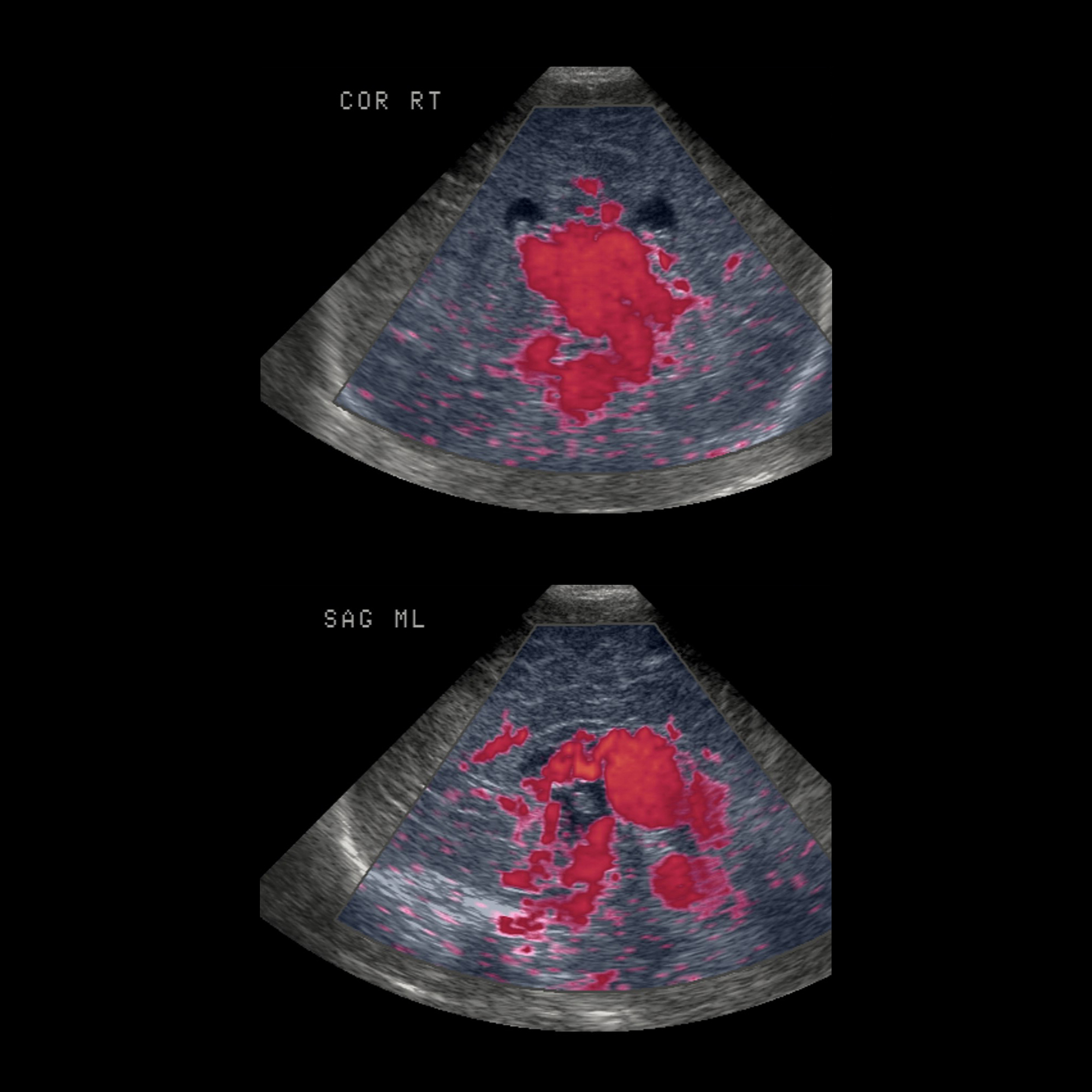 Newborn who
did not receive a screening head ultrasound before being placed emergently on ECMO and who is not doing well on ECMOCoronal and sagittal US of the brain shows a high flow vascular structure in the region of the median prosencephalic vein. A bruit was subsequently noted in this area.The diagnosis was Vein of Galen malformation, which is a contraindication to being placed on ECMO.
pediatricimaging.org • CC-by-nc-sa 4.0 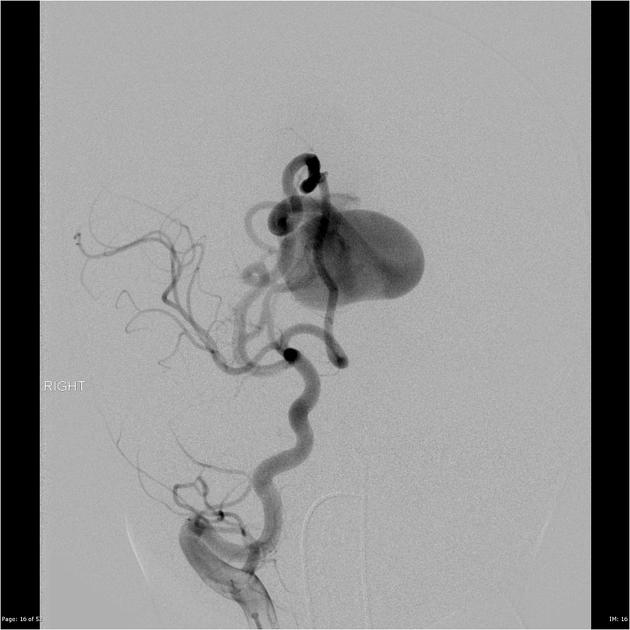 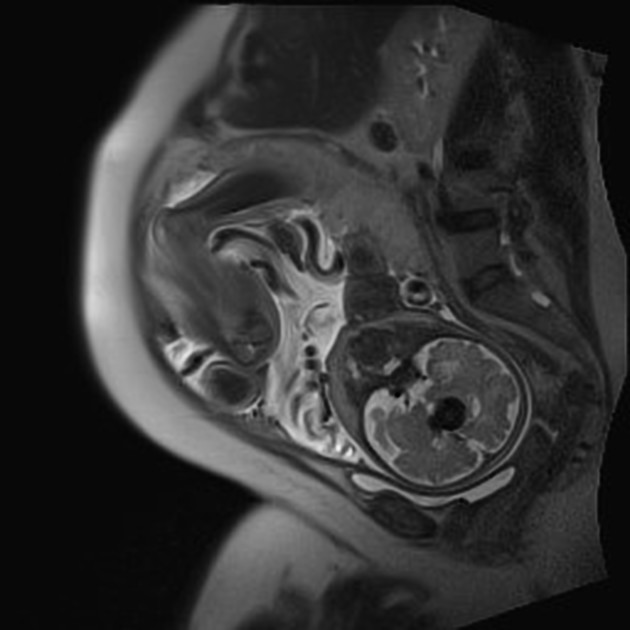 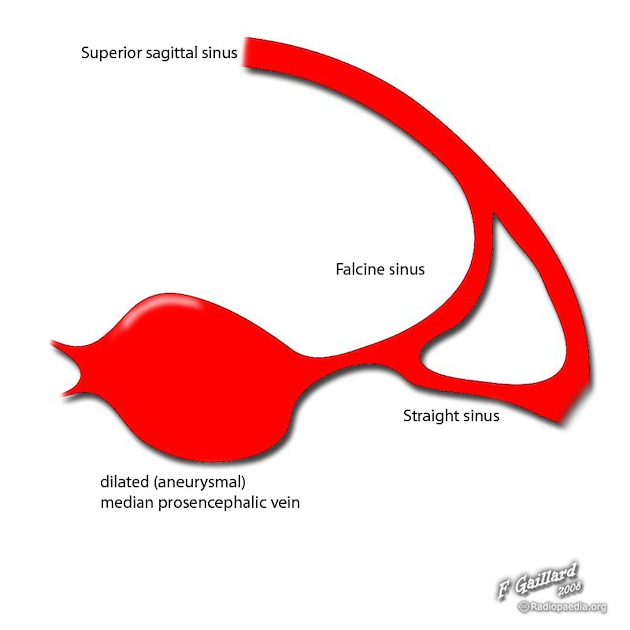 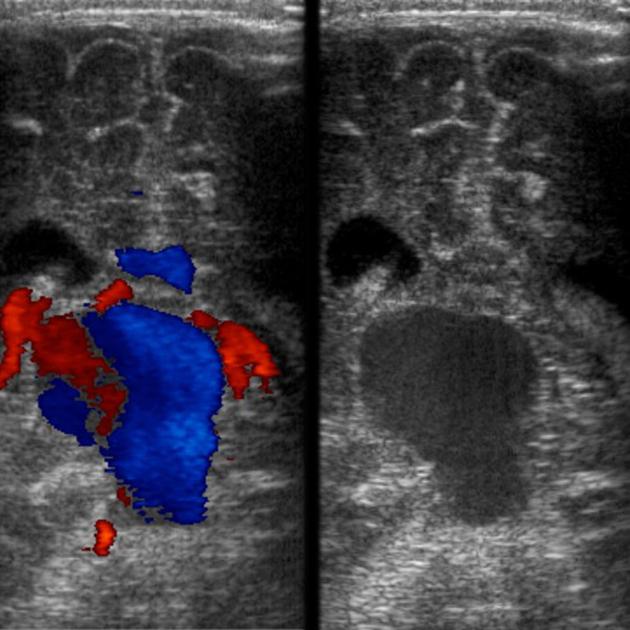 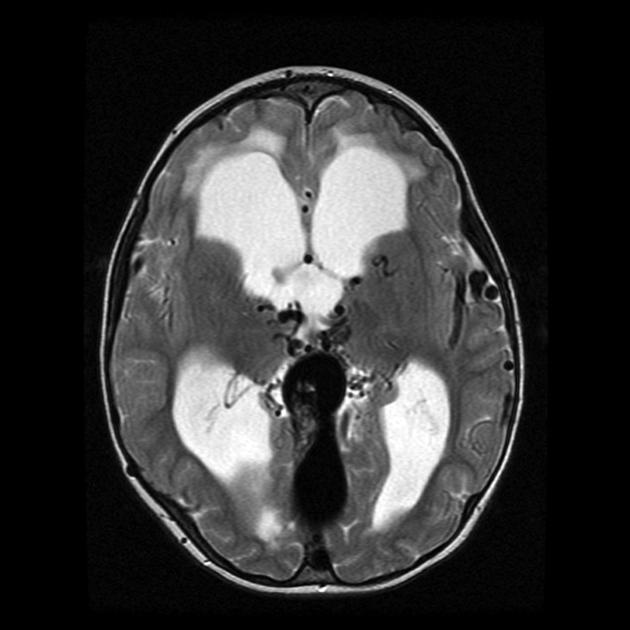 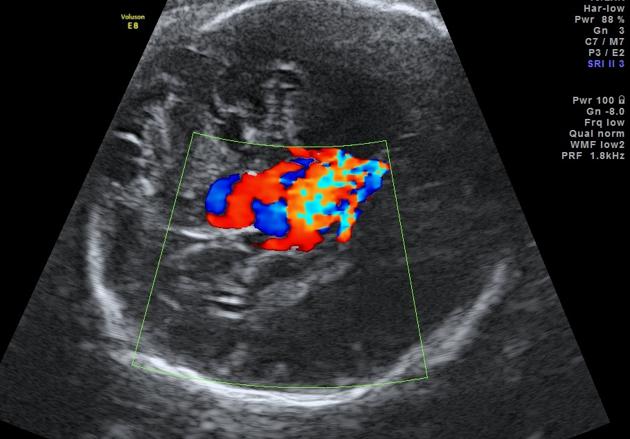 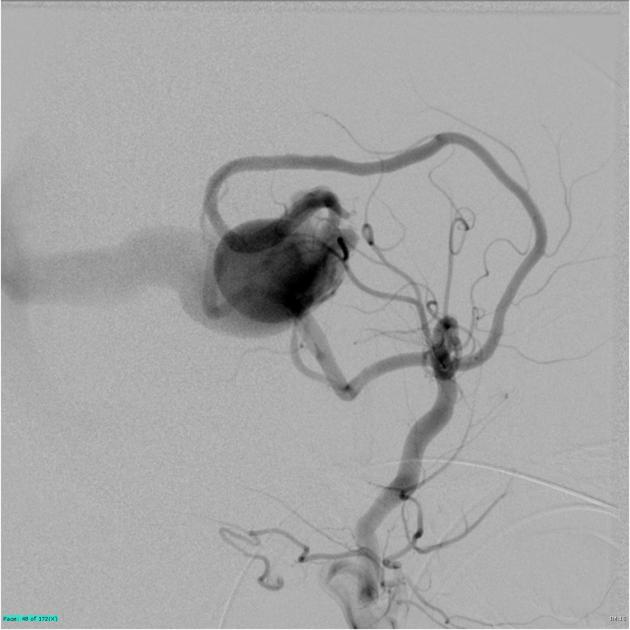 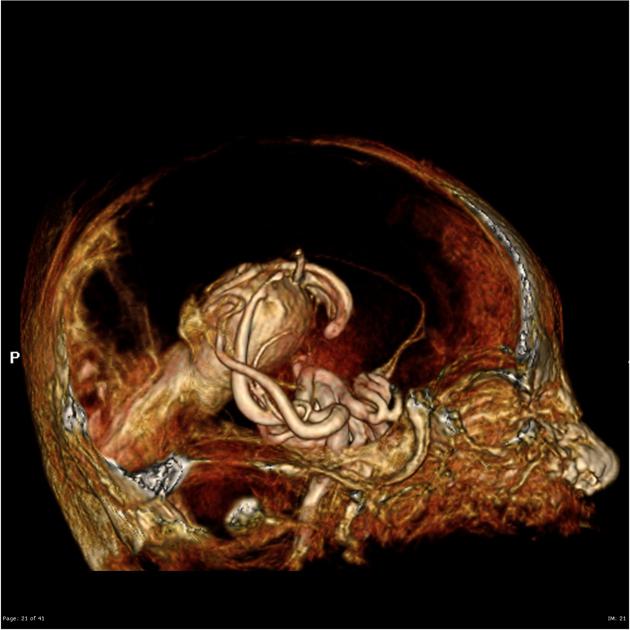 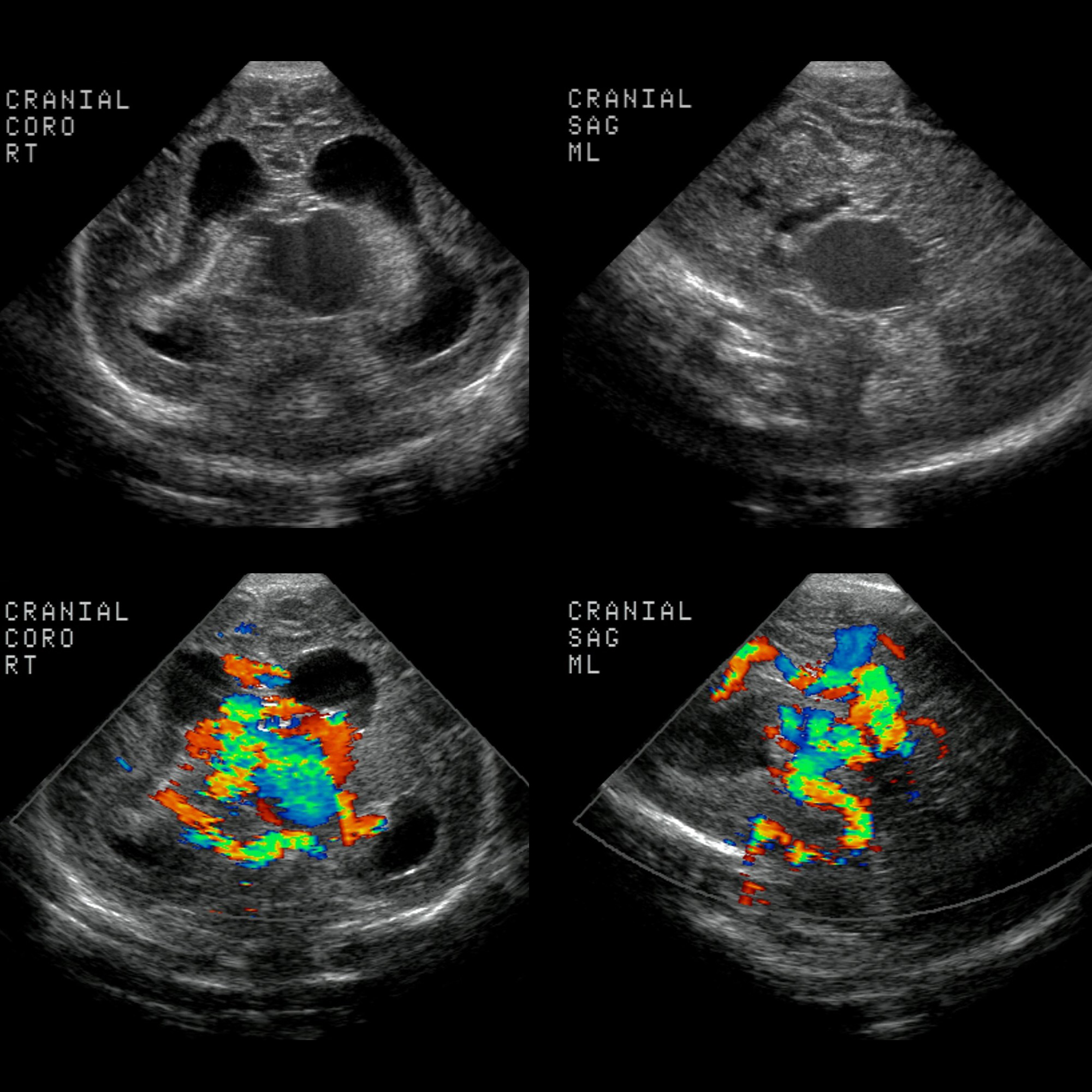 Newborn with
respiratory distress, a heart murmur and a head bruit. Coronal grayscale US of the head (above left) shows a large round hypoechoic structure in the midline between the posterior horns of the lateral ventricles and above the cerebellum on the sagittal grayscale US (above right) which on color doppler (below) has turbulent blood flow within it.The diagnosis was Vein of Galen malformation.
pediatricimaging.org • CC-by-nc-sa 4.0 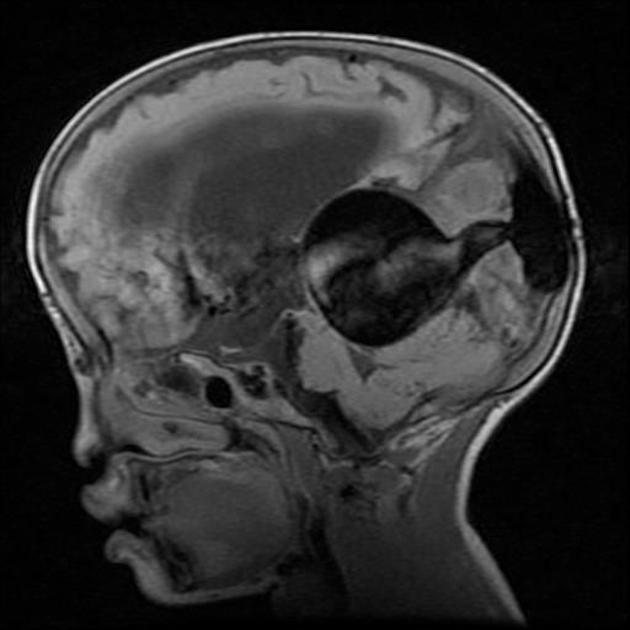 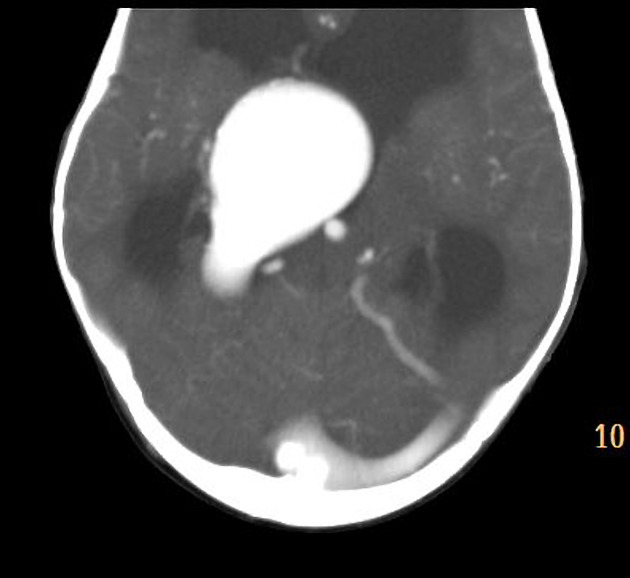 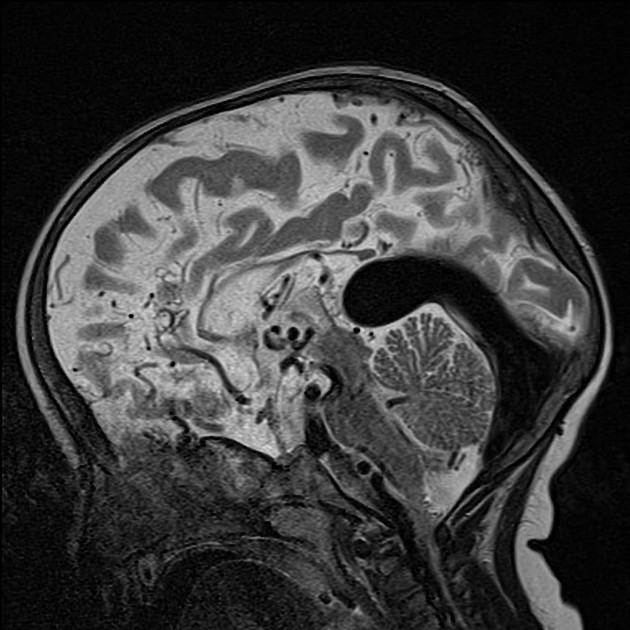 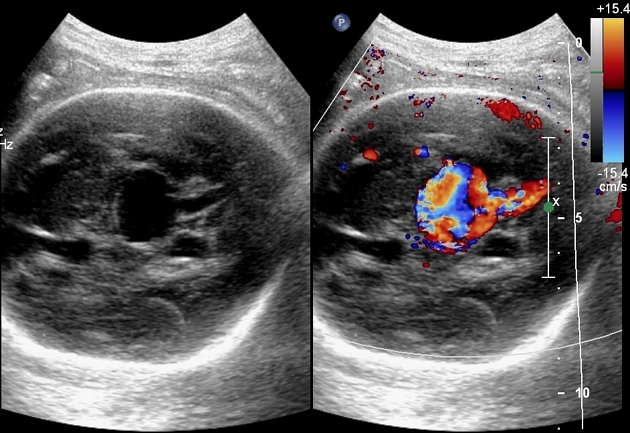 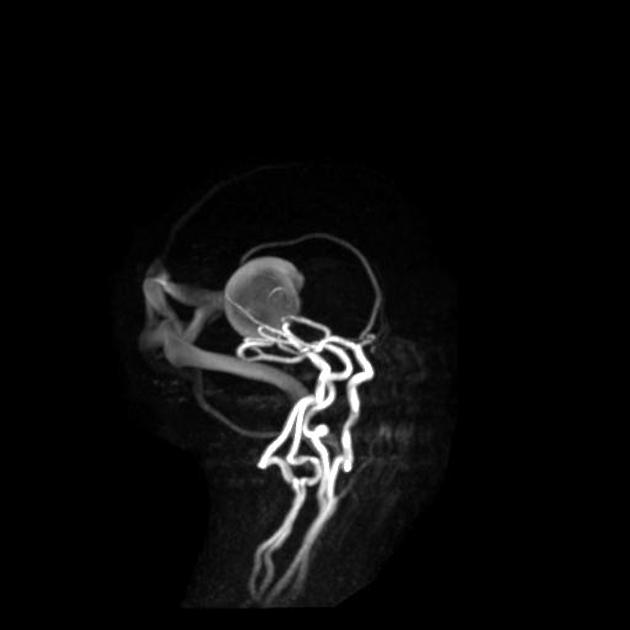 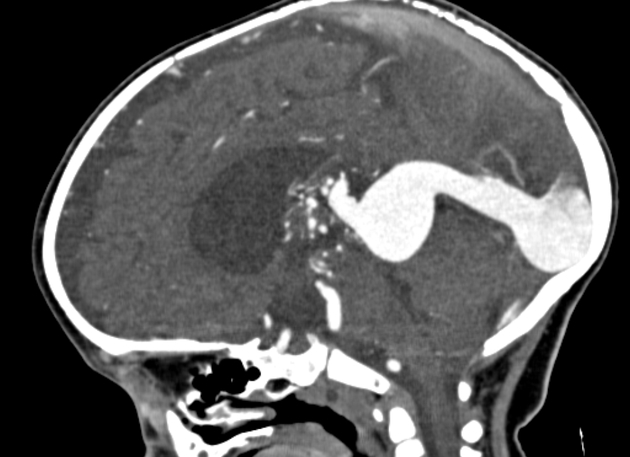 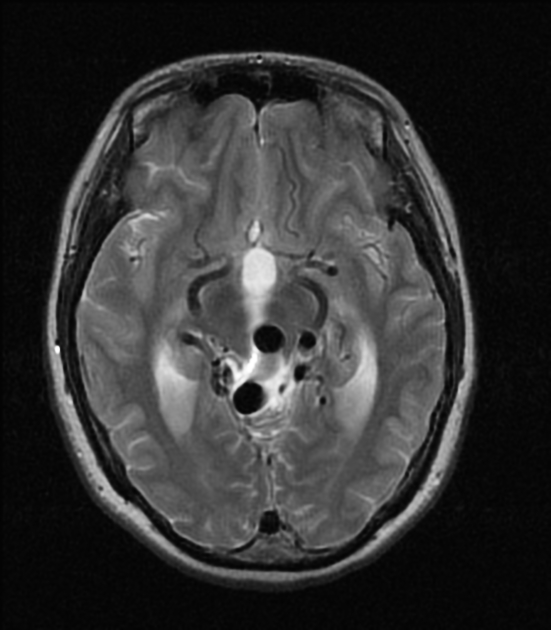 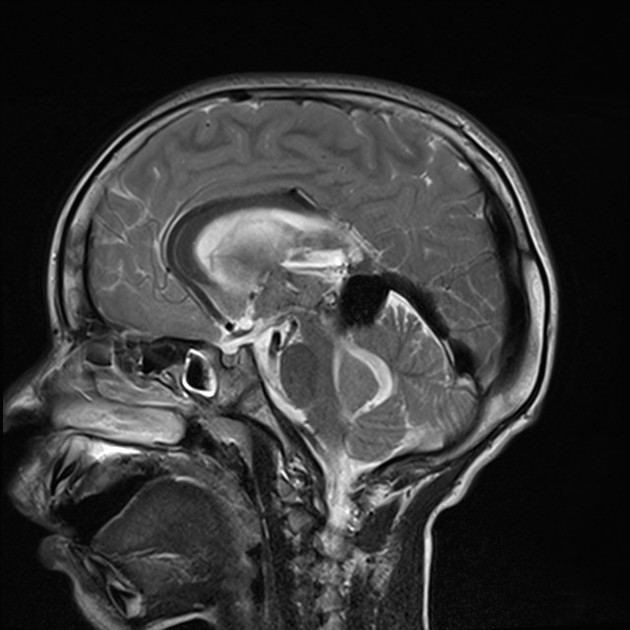 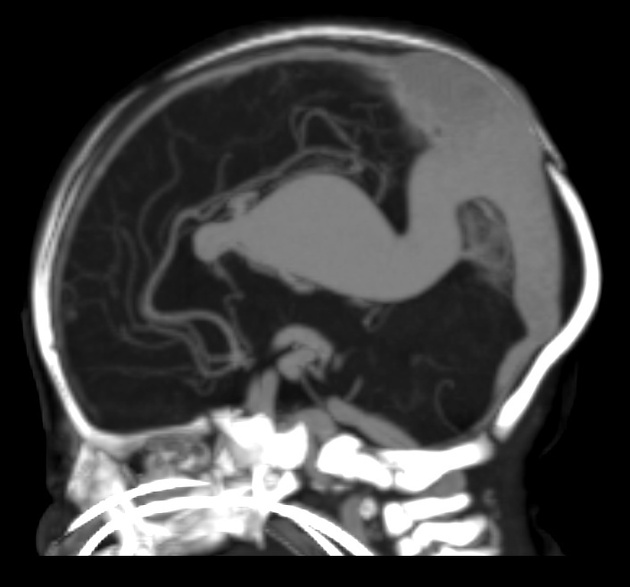 Increasingly the diagnosis is being made antenatally with third-trimester antenatal ultrasound. Presentation is often with high-output cardiac failure in the neonatal period, although low-flow aneurysms may remain undetected into adulthood. As much as 80% of cardiac output may shunt through the fistula. The presentation does, however, vary with the type of malformation, and different types present at different ages:

The anomaly is actually due to a cerebral arteriovenous fistula of the median prosencephalic vein (MPV) (a precursor of the vein of Galen) occurring at 6-11 weeks gestation and not a malformation (no nidus present). The MPV fails to regress and becomes aneurysmal. It drains via the straight sinus (present only in 50%) or a persistent falcine sinus, and the vein of Galen does not form.

Malformations have been classified in a number of ways starting as early as 1960 when Litvak et al.  recognized the need for a classification system in the region of the vein of Galen. Over the years, the most commonly used systems of classification are:

With increased availability and quality of antenatal ultrasound, the diagnosis is increasingly made prior to delivery. Antenatal detection is however mostly reported late in pregnancy (3trimester).

The dilated median prosencephalic vein (MPV) appears as an anechoic structure in the midline posteriorly and demonstrates prominent flow on Doppler examination. Shunting may lead to complications such as hydrops fetalis or fetal cardiomegaly.

Both CT and MRI can be used to delineate the malformation cross-sectionally.

CTA in neonates with high output cardiac failure is technically-challenging due to the small volumes of contrast and very rapid passage of contrast through the circulation.

The dilated feeding and draining vessels appear as flow-voids on T2. MRA may also be performed which would better delineate vascular anatomy.

Angiography remains the gold standard in full characterization of the lesion. It enables to individually catheterize feeding vessels. Morphologically a spherical or ellipsoid varix may be visualized. Venous drainage is via the median prosencephalic vein (MPV), the straight sinus (if present) and then out via the transverse/sigmoid sinuses. By definition, there should be no drainage to other components of the deep venous system .

Prior to endovascular intervention, the prognosis was dismal, with 100% mortality without treatment and 90% mortality following surgical attempts .

Ideally, embolization is deferred until 6 months of age for choroidal VGAM and later for mural types, to allow the cavernous sinus to mature. If cardiac failure is refractory to medical management, embolization may be performed sooner.

Both venous and arterial embolization is possible, depending on the number of feeders, and controversy persists in regards to the optimal approach. Options include :

Both coils and acrylic glue can be used in a single procedure or in staged approach .

Radiosurgery has been tried but is limited to patients who are not candidates for other treatment modalities .

Hydrocephalus is typically not shunted, as this may exacerbate cerebral ischemia by altering cerebral hemodynamics and due to the increased risk of intraventricular hemorrhage.

The prognosis is determined mainly by the presence or absence of cardiac failure.  Thus choroidal types and those presenting in the neonatal period do poorly.

Vein of Galen malformations are named after Galen of Pergamon (gr. Γαληνός, also known as Aelius Galenus or Claudius Galenus) (AD 129-199), a Greek physician and philosopher in the Roman Empire .

Once abnormal vessels are identified, there is usually little diagnostic uncertainty, with the only two entities to be considered being: