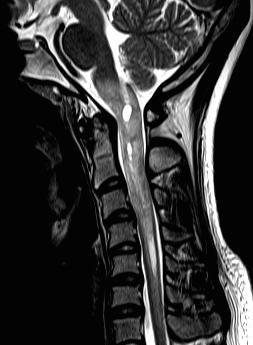 Tumor-like
Neuromyelitis Optica. Sagittal T2WI. Expanding lesion of the medulla and cervical spinal cord, extending to the C6-C7 level. Hyperintense, with cystic areas in the affected cord, corresponding to the entrapment of the ependymal canal
www.eurorad.org • CC by-nc-sa-4.0 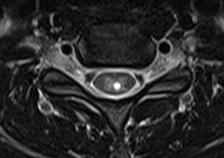 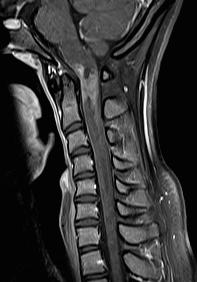 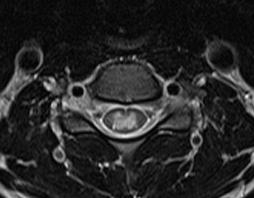 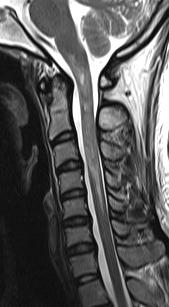 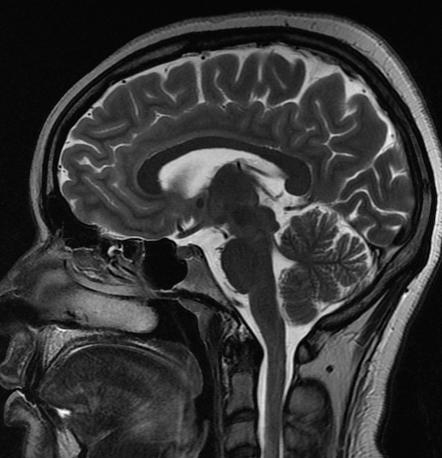 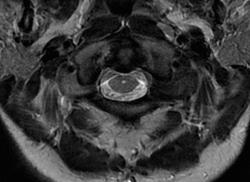 Neuromyelis optica (NMO) and neuromyelitis optica spectrum disorder (NMOSD) are closely related severe demyelinating diseases caused by an autoantibody to the aquaporin-4 water channel. The classic presentation of NMO is with the triad of optic neuritis, longitudinally extensive myelitis, and positive anti-AQP4 antibody, although a far wider range of manifestations are now recognized as part of NMOSD .

Neuromyelitis optica (NMO) was previously referred to as Devic disease, and traditionally NMO was thought to have limited if any intracranial manifestations. Over the past decade, however, a far wider range of manifestations have been recognized as belonging together and thus the term NMOSD has been proposed to encompass them all.

Neuromyelitis optica is typically found in patients somewhat older than those with multiple sclerosis (MS), with an average of presentation of 41 years, and there is an even stronger female predilection (F:M 6.5:1) . It is found more frequently in patients of Asian, Indian, and African descent .

NMO is characterized by bilateral optic neuritis and myelitis resulting in blindness and paraplegia. Although the two usually present concurrently, it is not uncommon for one to precede the other by up to several weeks . Additionally, it is now recognized that some patients present with unilateral optic nerve involvement.

Although NMO was initially thought of as a monophasic illness, it is now evident that, as with MS, it is usually a relapsing-remitting disease with symptomatic events separated by many years .

The current diagnostic criteria are defined by the International Panel for NMO Diagnosis.

In approximately 70% (sensitivity of 70-90%; specificity of 90%) of patients with established NMO, a specific immunoglobulin can be isolated (AQP4-IgG which targets a transmembrane water channel (aquaporin 4) present on astrocyte foot processes abutting the limiting membrane . This accounts for some of the predilection for the circumventricular organs (e.g. periaqueductal grey matter) which are particularly rich in aquaporin 4 .

Early in the disease, demyelinating regions will demonstrate similar findings to MS, such as macrophage/microglia activation and axonal damage. Additionally, however, and relatively specific for NMO, these regions will also demonstrate extensive eosinophilic infiltration, perivascular deposition of immunoglobulins (especially IgM) and local activation of the complement cascade . Another differentiating feature is that axonal damage precedes demyelination in NMO .

Generally, the condition is sporadic, although some overlap in immunogenic features between certain viruses and aquaporin-4 water channel have been identified .

A significant proportion of individuals presenting with NMO but without AQP4 antibodies will be found to have anti-MOG IgG antibodies . These individuals appear to have somewhat different demographics and less severe clinical course .

MRI is the modality of choice for NMOSD and the orbits, brain and spinal cord should be imaged in suspected cases.

Although traditionally NMO was thought to have normal intracranial appearance it is increasingly evident that asymptomatic abnormalities are present in the majority of seropositive NMOSD patients. These can be divided into four categories :

Bright spotty lesions are a specific feature of NMO. It consists of marked T2 hyperintense (higher than CSF) and T1 hypointense foci in the central grey matter.

It is important to distinguish NMO from MS as the treatment not only is different but treating a patient with NMO with MS-specific therapies (e.g. beta-interferon or natalizumab) can actually lead to its exacerbation .

Patients with a relapsing course have a poorer prognosis :

The disease was first described in 1870 by Sir Thomas Clifford Allbutt . The French term "neuromyélite optique aiguë" (literally acute optic neuromyelitis) was later coined by Dr. Eugène Devic and Fernand Gault in 1894 in a case series of 16 patients . At the time, the disorder was thought to be acute and monophasic.

For many years, it was considered to be a subtype of multiple sclerosis, until the discovery of anti-aquaporin-4 antibodies at which time it was moved into its own disease category. It is now evident that a significant proportion of patients with clinical NMO do not have the anti-AQP4-antibody (some have anti-MOG-antibodies for example) and that the presentation can be more heterogeneous. At present, therefore, the term neuromyelitis optica spectrum disorder (NMOSD) is now used. It is very likely that there will be significant further evolution of our understanding of this disease in the near future.

The differential diagnosis depends on the presentation, and when classic, the diagnosis can be made with a fair degree of certainty. The most important clinical and imaging differential is MS as both can present with optic neuritis, cerebral and spinal demyelination including involvement of the corpus callosum (see Practical points).

For patients with cerebral involvement, the differential is broad and includes:

For patients with optic nerve involvement, the differential is that of optic neuritis.