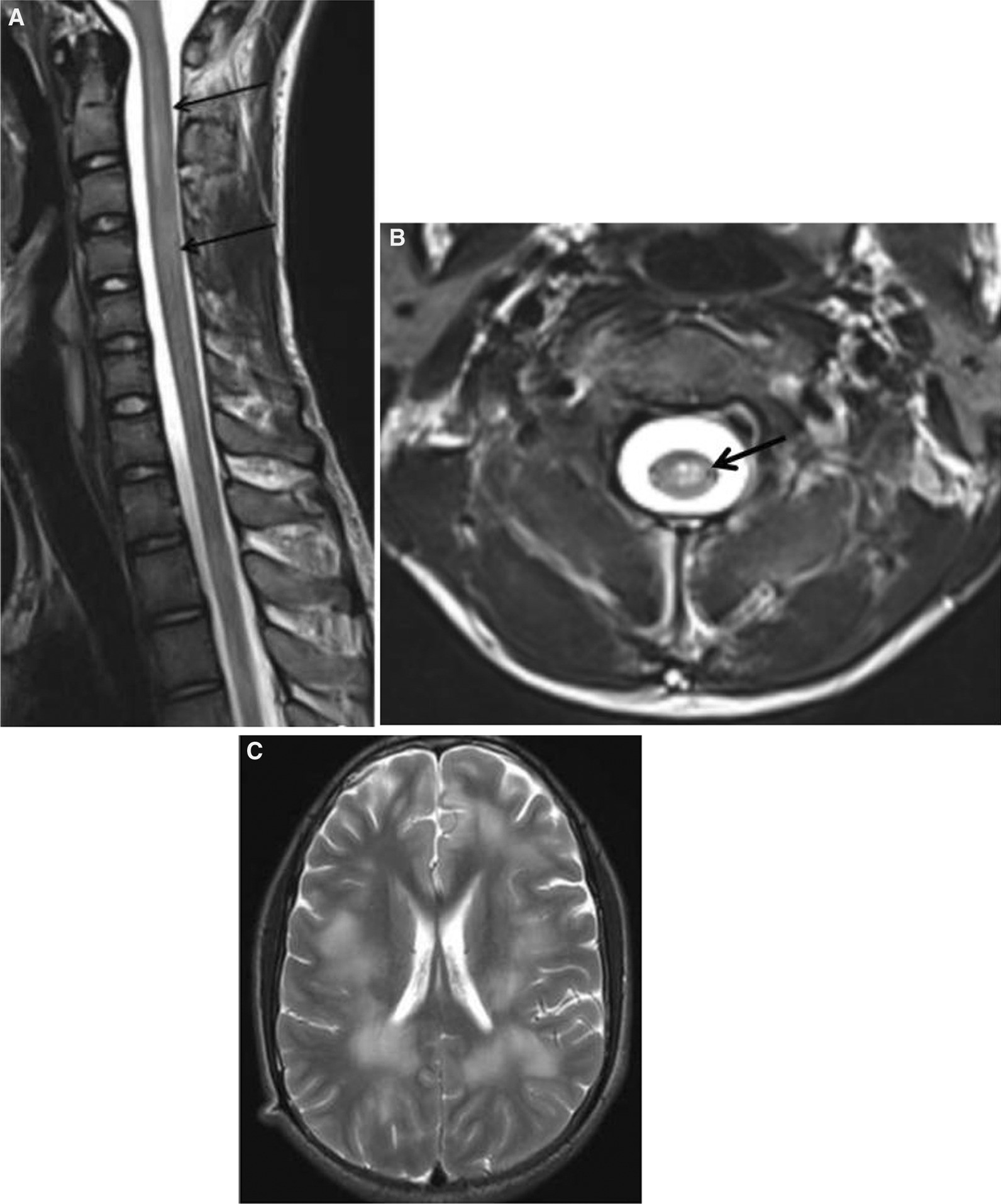 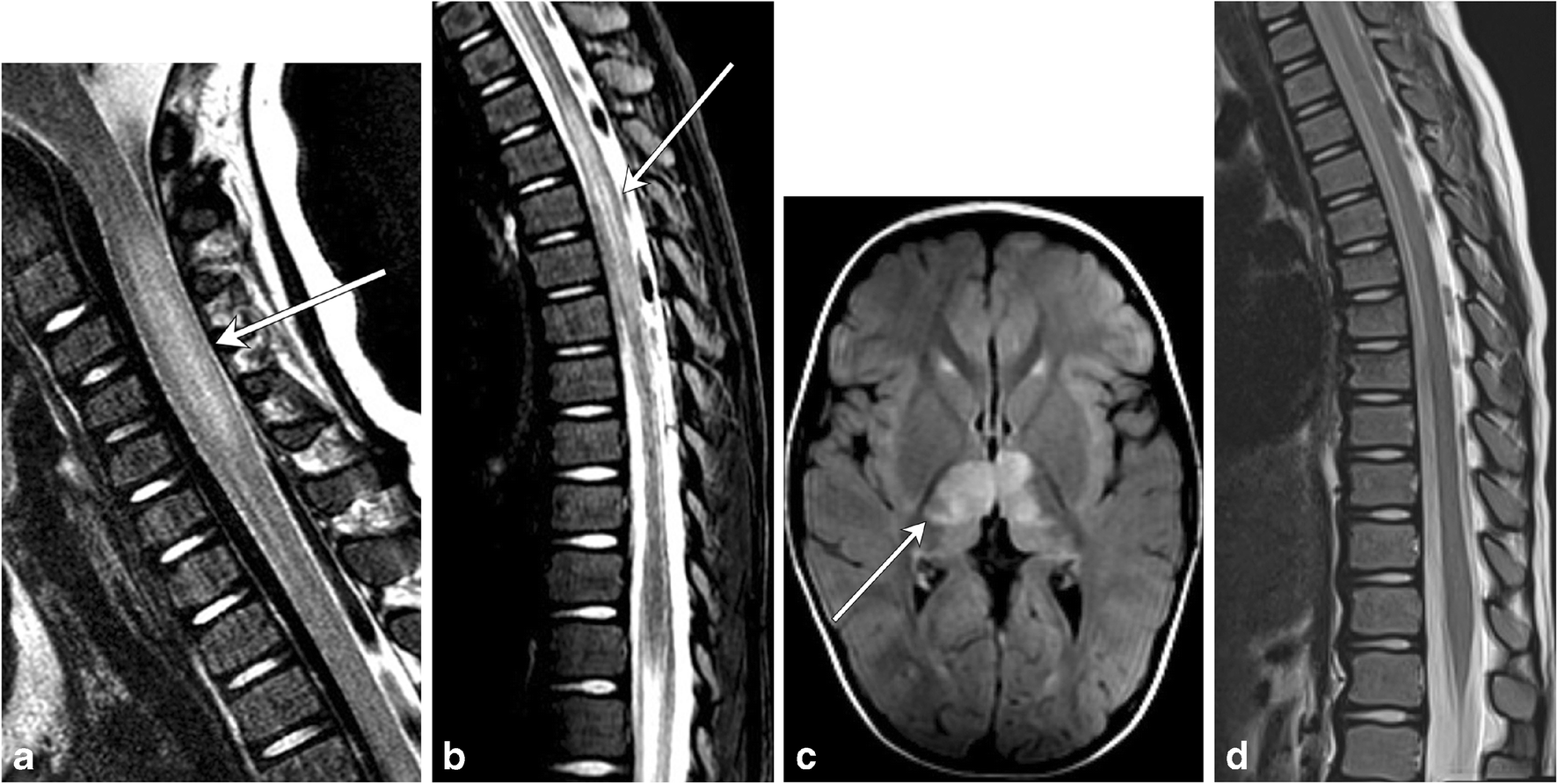 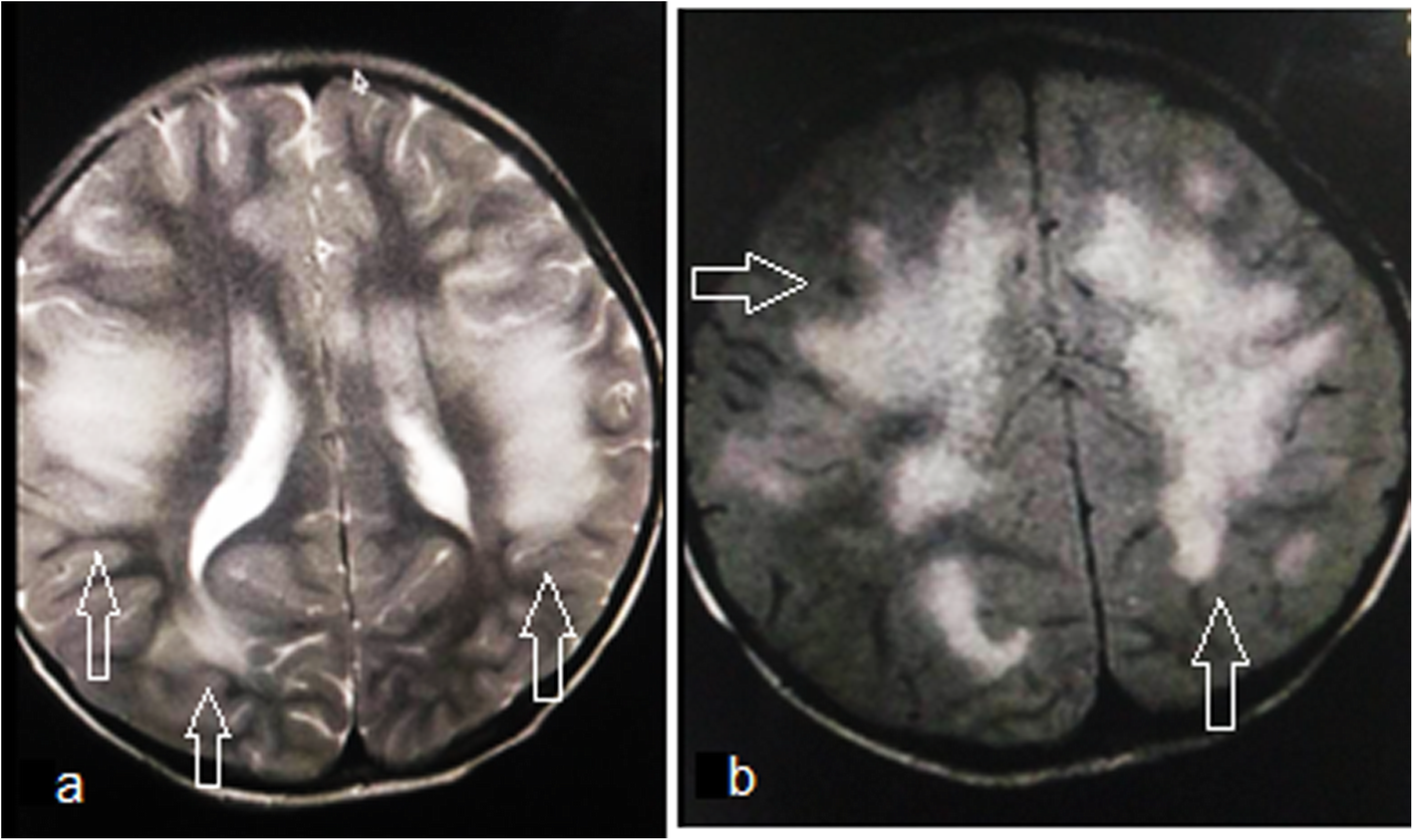 Role of MRI
evaluation in acute secondary inability to walk in children. MRI brain demonstrates ADEM 2 pattern. a, b Bilateral rather symmetrical fronto-parietal periventricular white matter poorly demarcated patchy areas of abnormal signal high in T2W (a) as well as in FLAIR (b), impressive of demyelinating lesions
ejrnm.springeropen.com • CC-by-4.0 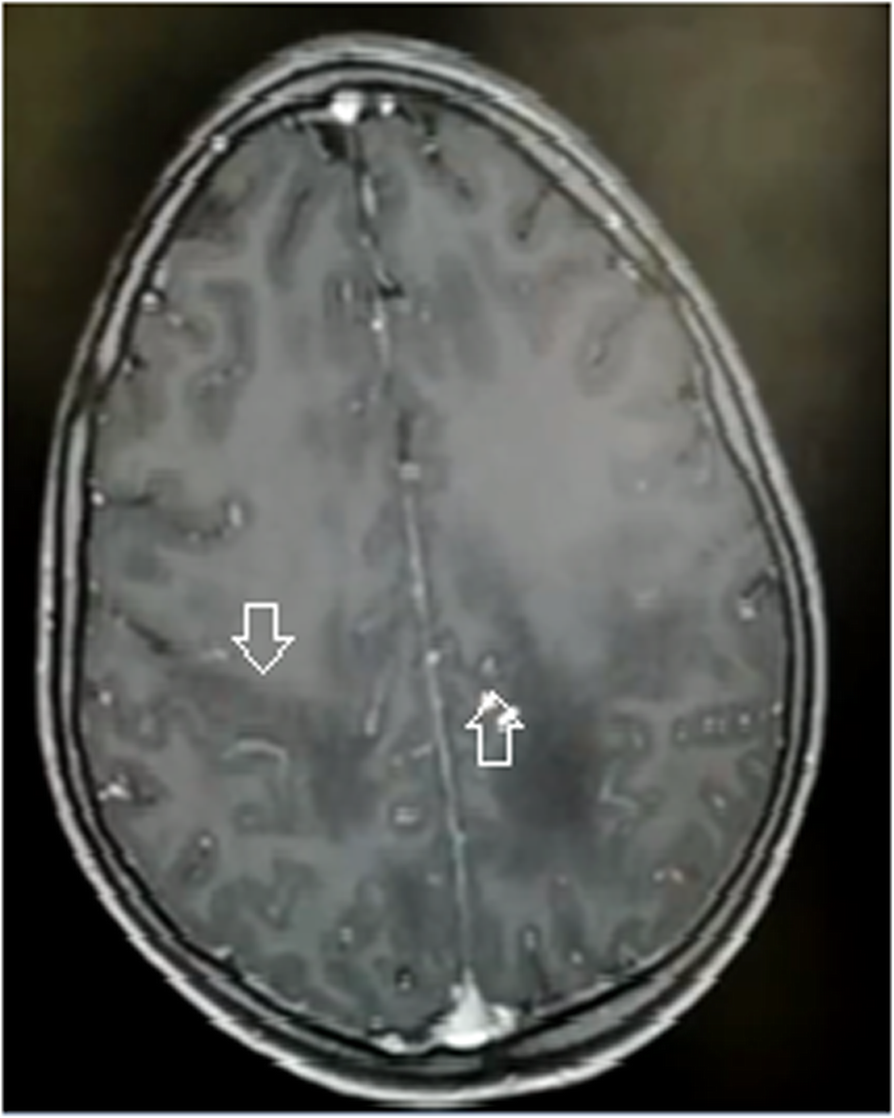 Acute disseminated encephalomyelitis (ADEM), as the name would suggest, is featured by a monophasic acute inflammation and demyelination of white matter typically following a recent (1-2 weeks prior) viral infection or vaccination . Grey matter, especially that of the basal ganglia, is also often involved, albeit to a lesser extent, as is the spinal cord.

Typically, acute disseminated encephalomyelitis presents in children or adolescents (usually younger than 15 years of age). However, cases have been reported in all ages . Winter and spring seasonal peaks in the presentation have been observed in some studies, supporting the infectious etiology hypothesis .

Less than 5% of all acute disseminated encephalomyelitis cases follow an immunisation .

Unlike many other demyelinating diseases (e.g. multiple sclerosis or neuromyelitis optica), acute disseminated encephalomyelitis has no female predilection; if anything, there is slight male predominance .

Acute disseminated encephalomyelitis is usually a monophasic illness, although, within the episode, individual lesions may be of varying stages of evolution, with different lesions maturing over a number of weeks . In 10% of cases, relapse within the first three months is encountered .

Unlike multiple sclerosis, symptoms are more systemic rather than focal and include fever, headache, decreased level of consciousness varying from lethargy to coma, seizure, and multifocal neurologic symptoms such as hemiparesis, cranial nerve palsies, and movement disorders; behavioral changes like depression, delusions, and psychosis may dominate the symptoms .

Acute disseminated encephalomyelitis is thought to occur from a cross-reactivity in immunity to viral antigens, triggering a subsequent autoimmune attack on the CNS. In approximately half of confirmed cases, anti-MOG (myelin oligodendrocyte glycoprotein) immunoglobulin G antibodies can be identified .

The pathological hallmark is perivenular inflammation with limited ‘‘sleeves of demyelination", which is also a feature of multiple sclerosis. However, multiple sclerosis typically presents confluent sheets of macrophage infiltration mixed with reactive astrocytes in completely demyelinated regions .

Appearances vary from small punctate lesions to tumefactive regions, which have less mass effect than one would expect for their size, distributed in the supratentorial or infratentorial white matter. Compared to multiple sclerosis, involvement of the callososeptal interface is unusual. Lesions are usually bilateral but asymmetrical. Involvement of cerebral cortex, subcortical grey matter - especially the thalami - and the brainstem is not very common, but if present are helpful in distinguishing from multiple sclerosis .

In addition to lesions involving grey matter, antibodies to basal ganglia can also develop, especially in the setting of post-streptococcal pharyngitis, resulting in more diffuse involvement .

The spinal cord may show confluent intramedullary lesions with variable enhancement, but these are only seen in approximately one-third of cases .

Despite the clinical and radiological differences mentioned above, it is frequently difficult to differentiate between acute disseminated encephalomyelitis and MS at first presentation. The most accepted criteria for differentiation in children are the Callen MS-ADEM criteria .

The lesions are usually indistinct regions of low density within the white matter and may demonstrate ring enhancement.

MRI is far more sensitive than CT and demonstrates lesions characteristic of demyelination:

Treatment typically consists of methylprednisolone, with immunoglobulin and cyclophosphamide reserved for patients refractory to steroids .

Complete recovery within one month is the most common outcome (50-60%), with sequelae (most commonly seizures) seen in a significant proportion of cases (20-30%).

In a small proportion (reported figures range from 10 to 20% ) the course is more fulminant, frequently resulting in death. In such cases, the lesion may demonstrate hemorrhage and the condition is then known as acute hemorrhagic leukoencephalitis (Hurst disease) .

When the diagnosis of acute disseminated encephalomyelitis is made, progression to multiple sclerosis is not uncommon, reported in up to 35% of cases . As fever and infection are well-known triggers for multiple sclerosis, it is perhaps not surprising that a history of recent infection is identified in clinically isolated syndrome (CIS).