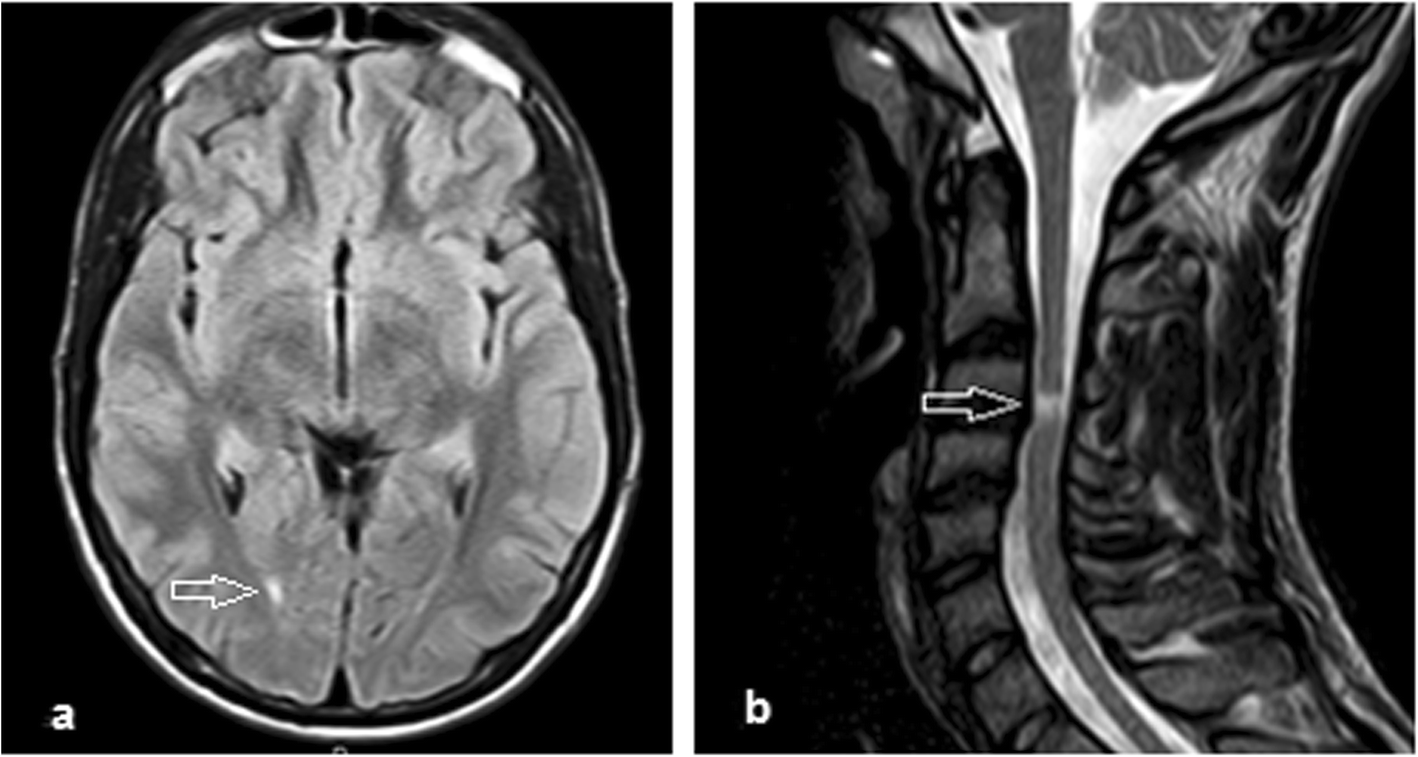 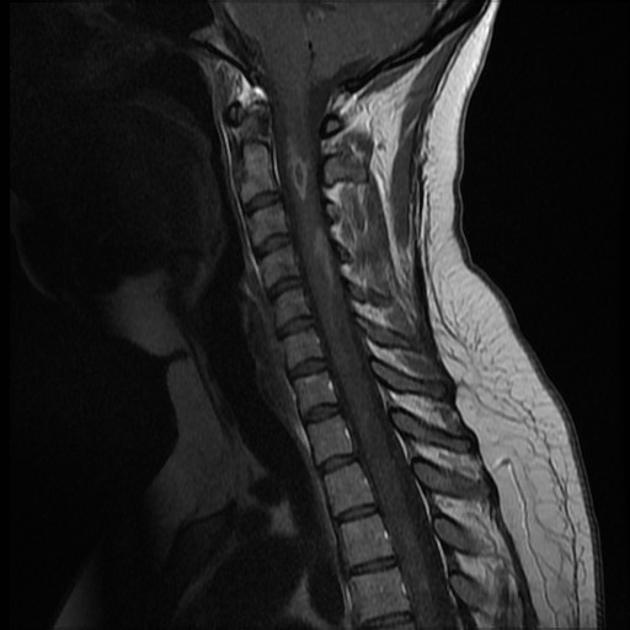 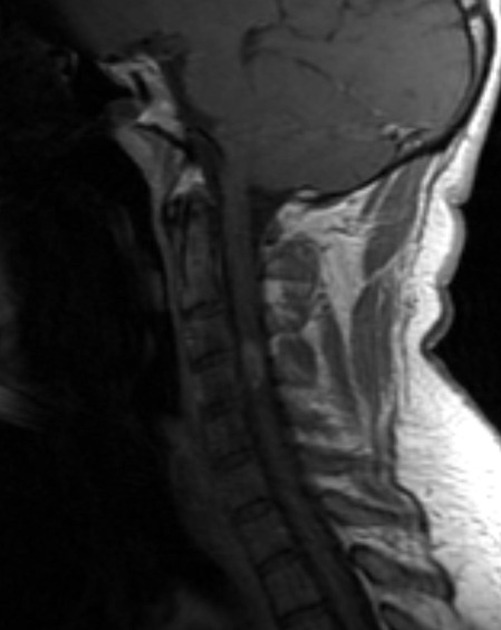 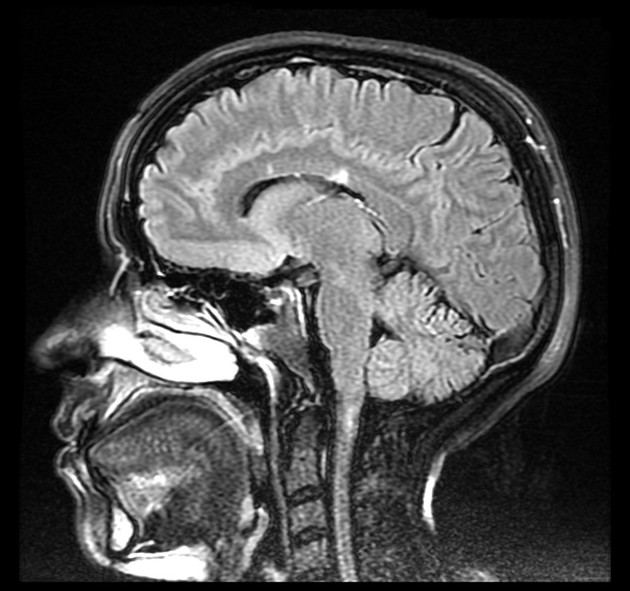 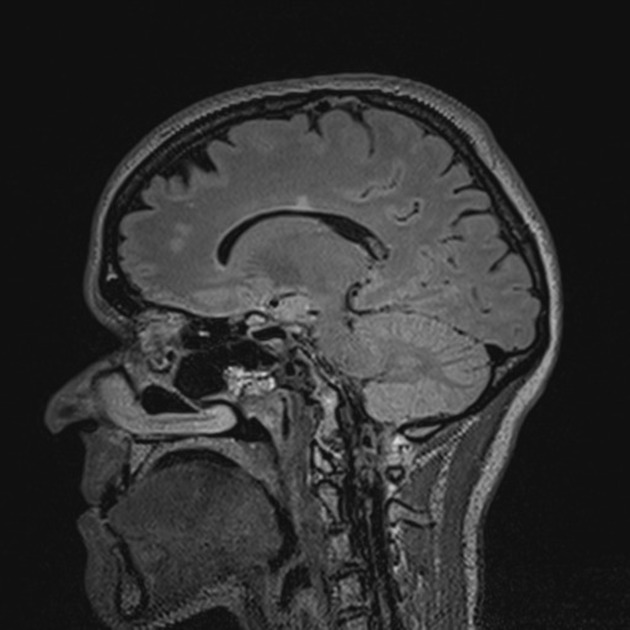 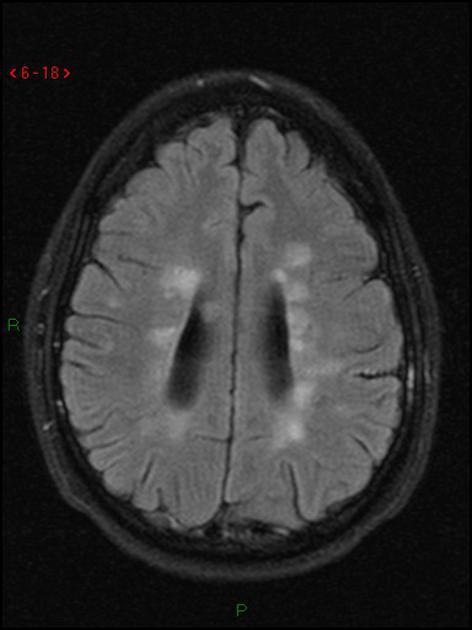 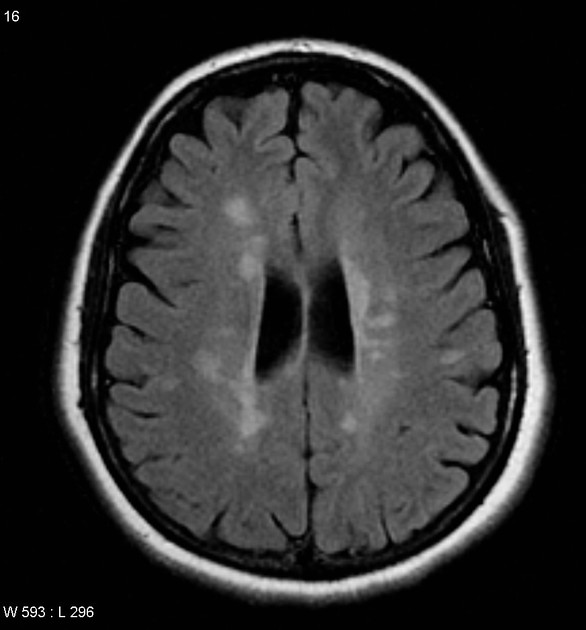 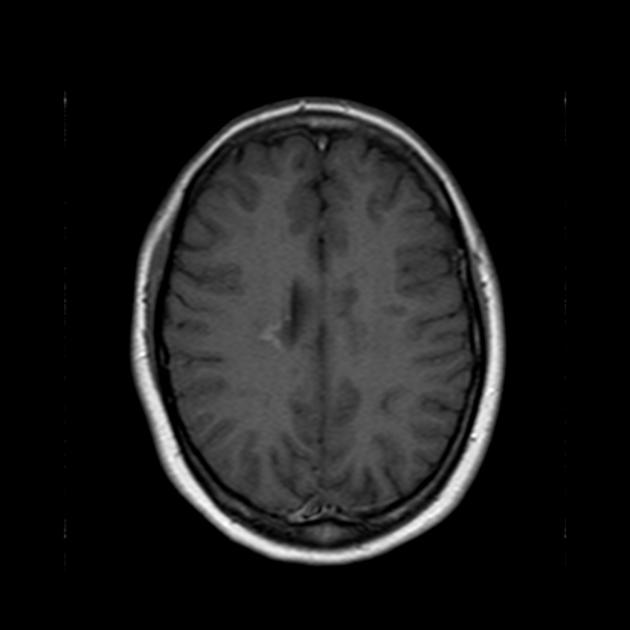 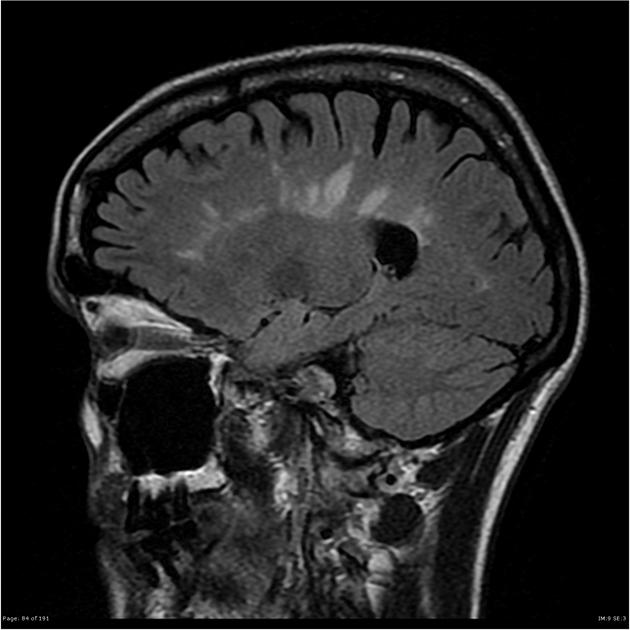 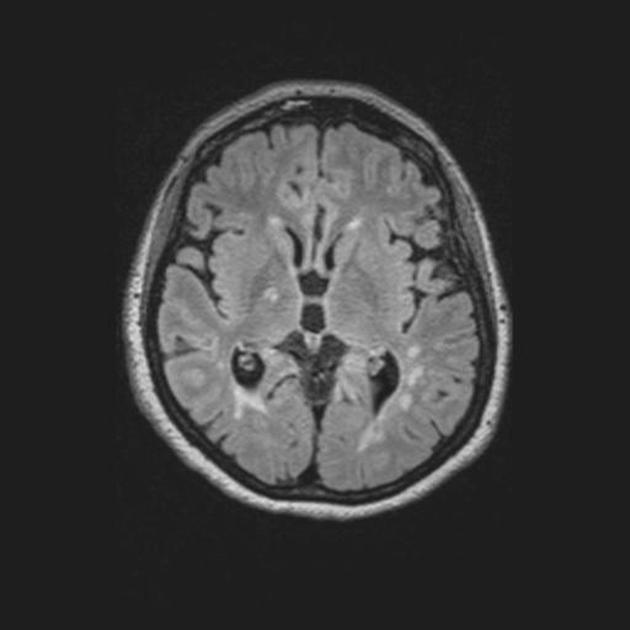 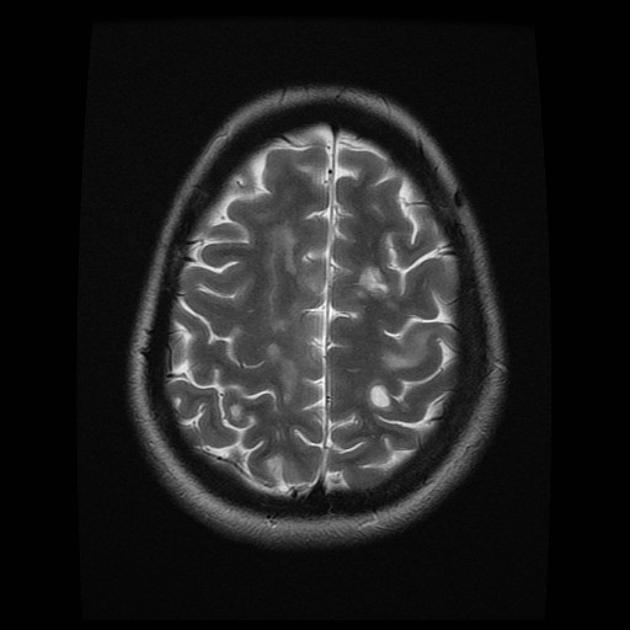 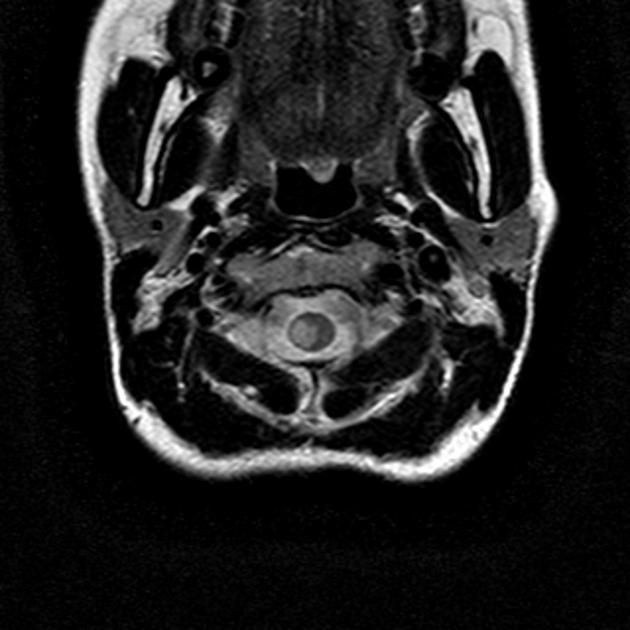 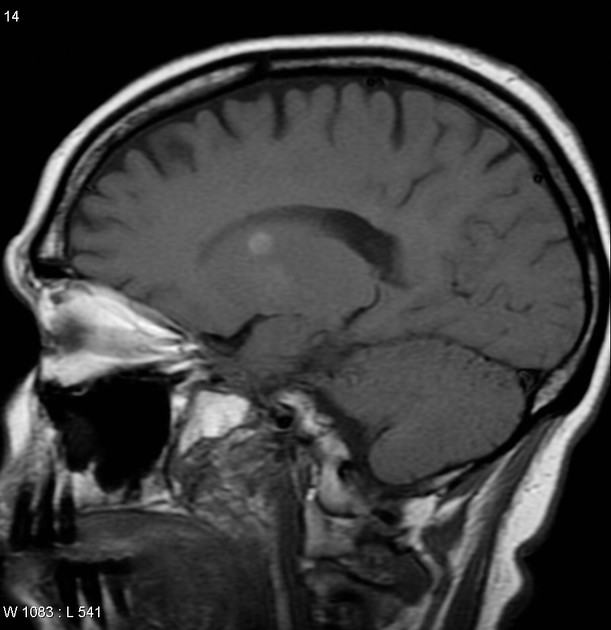 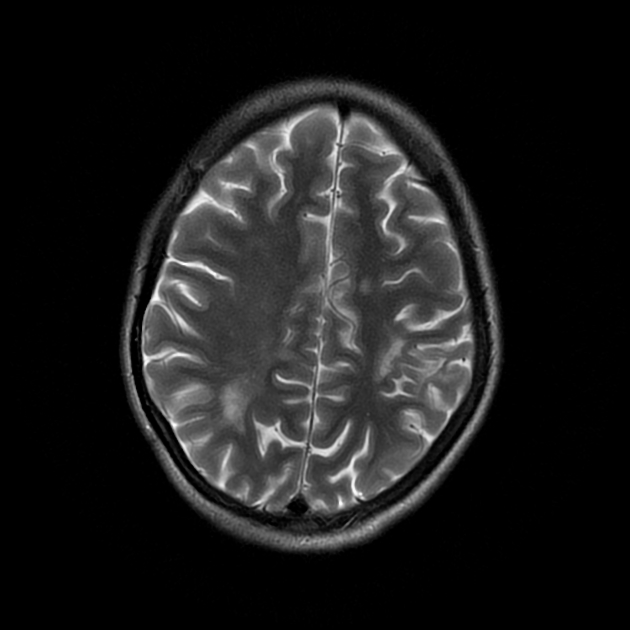 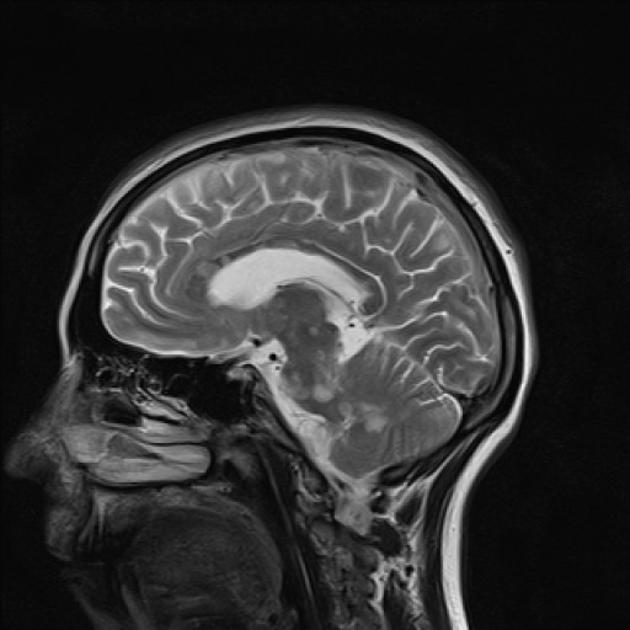 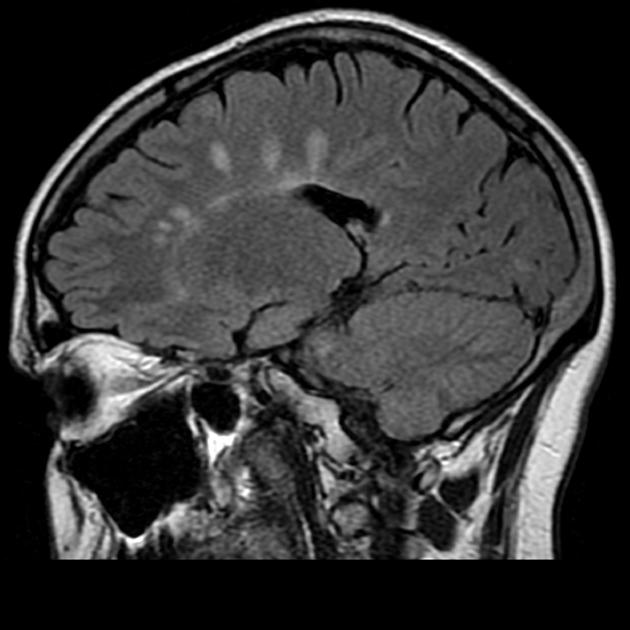 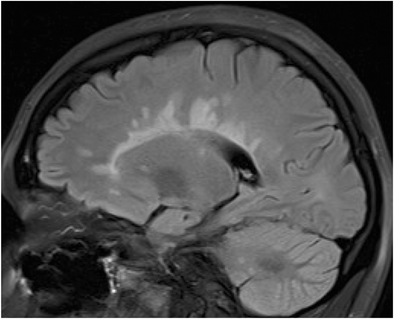 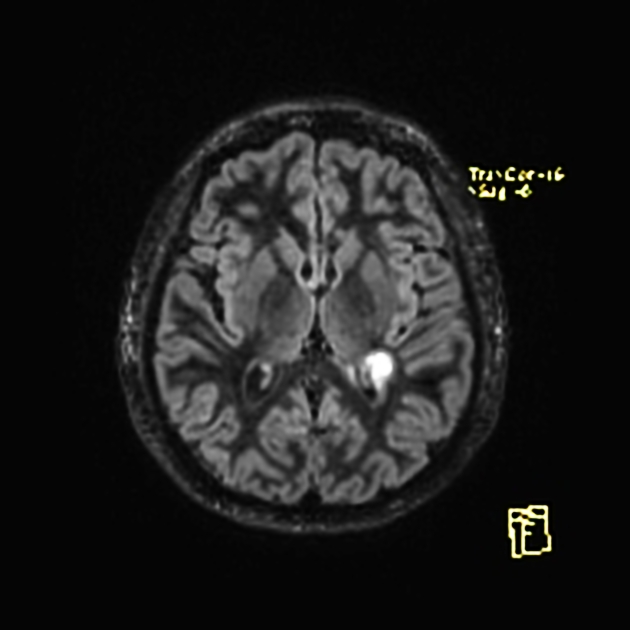 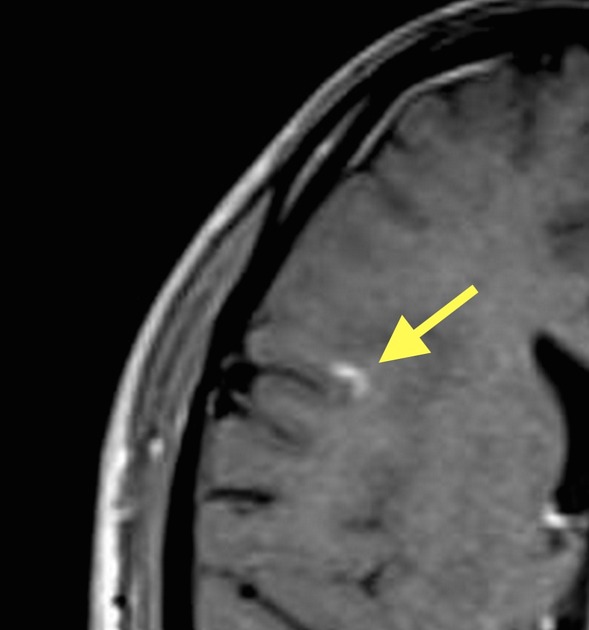 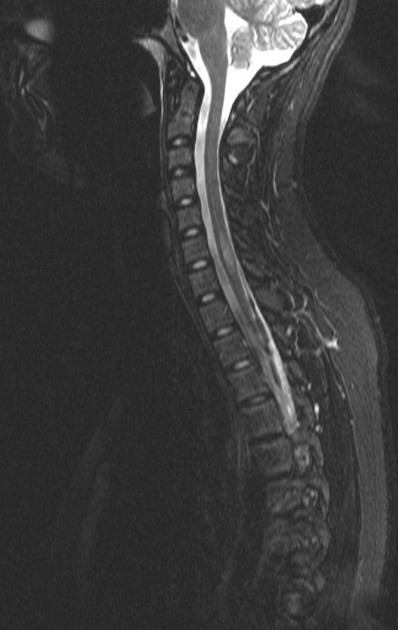 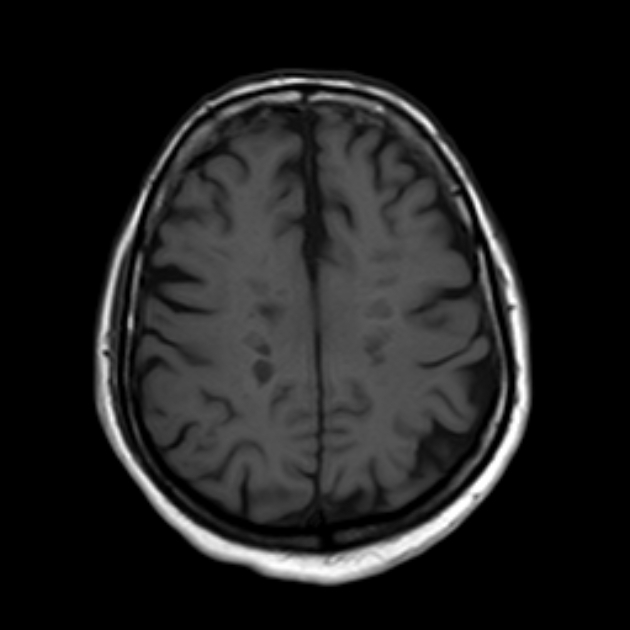 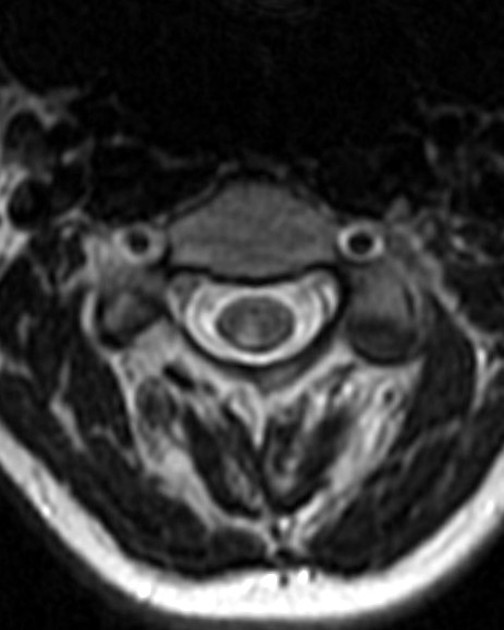 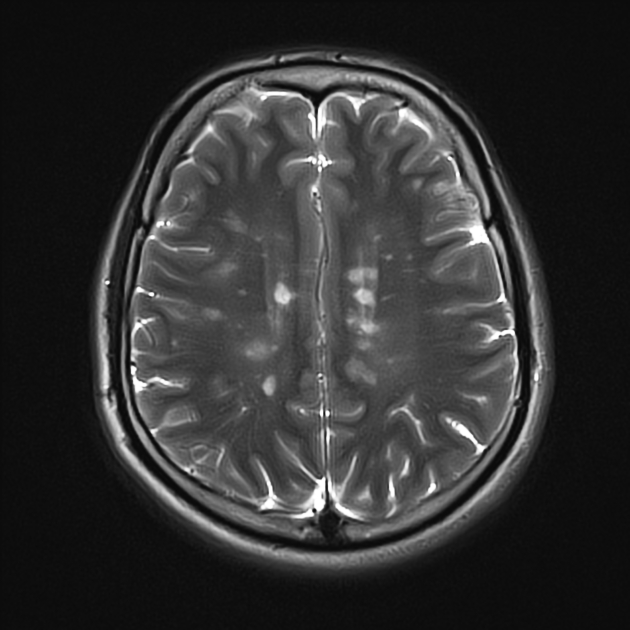 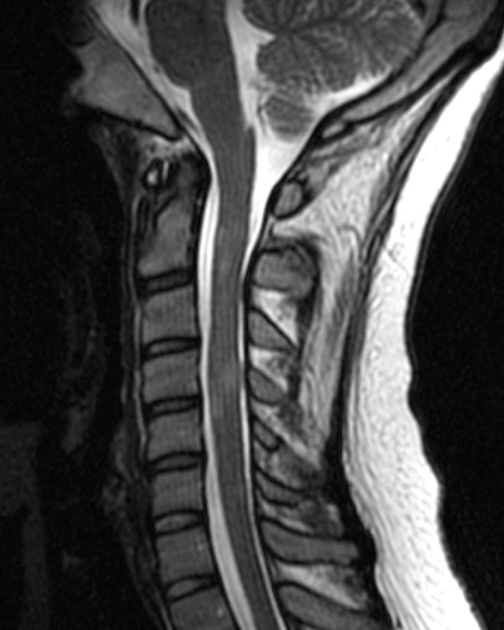 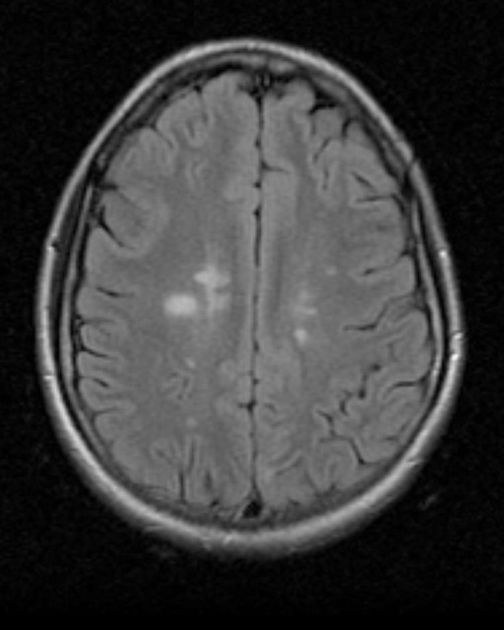 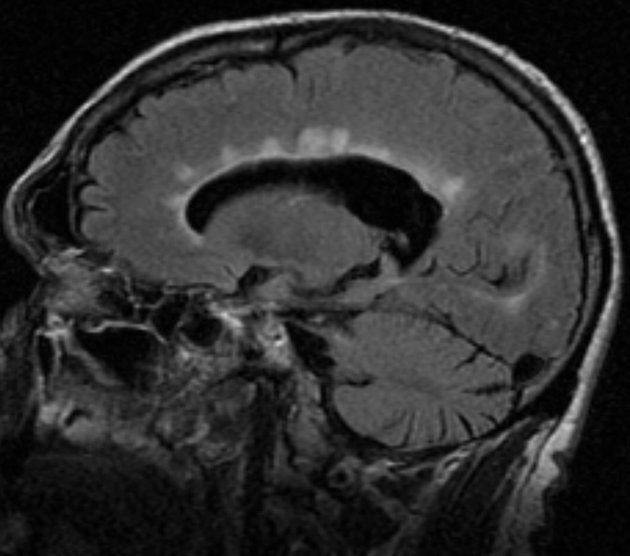 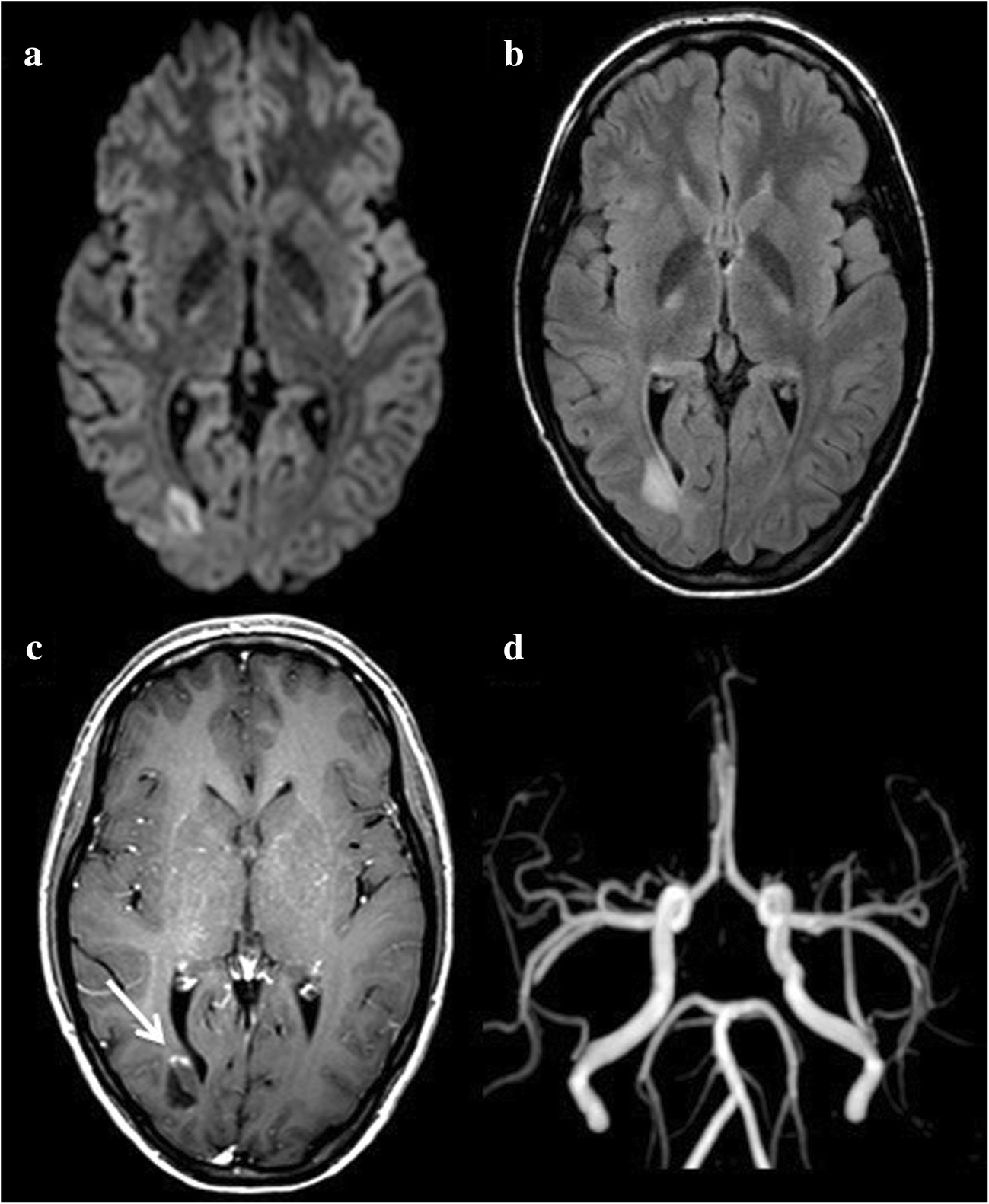 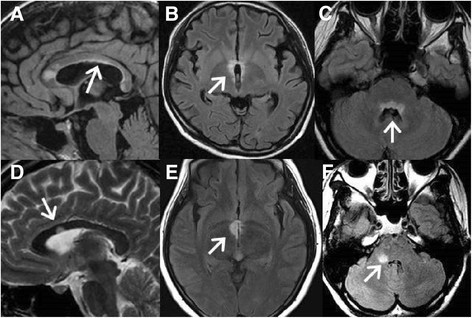 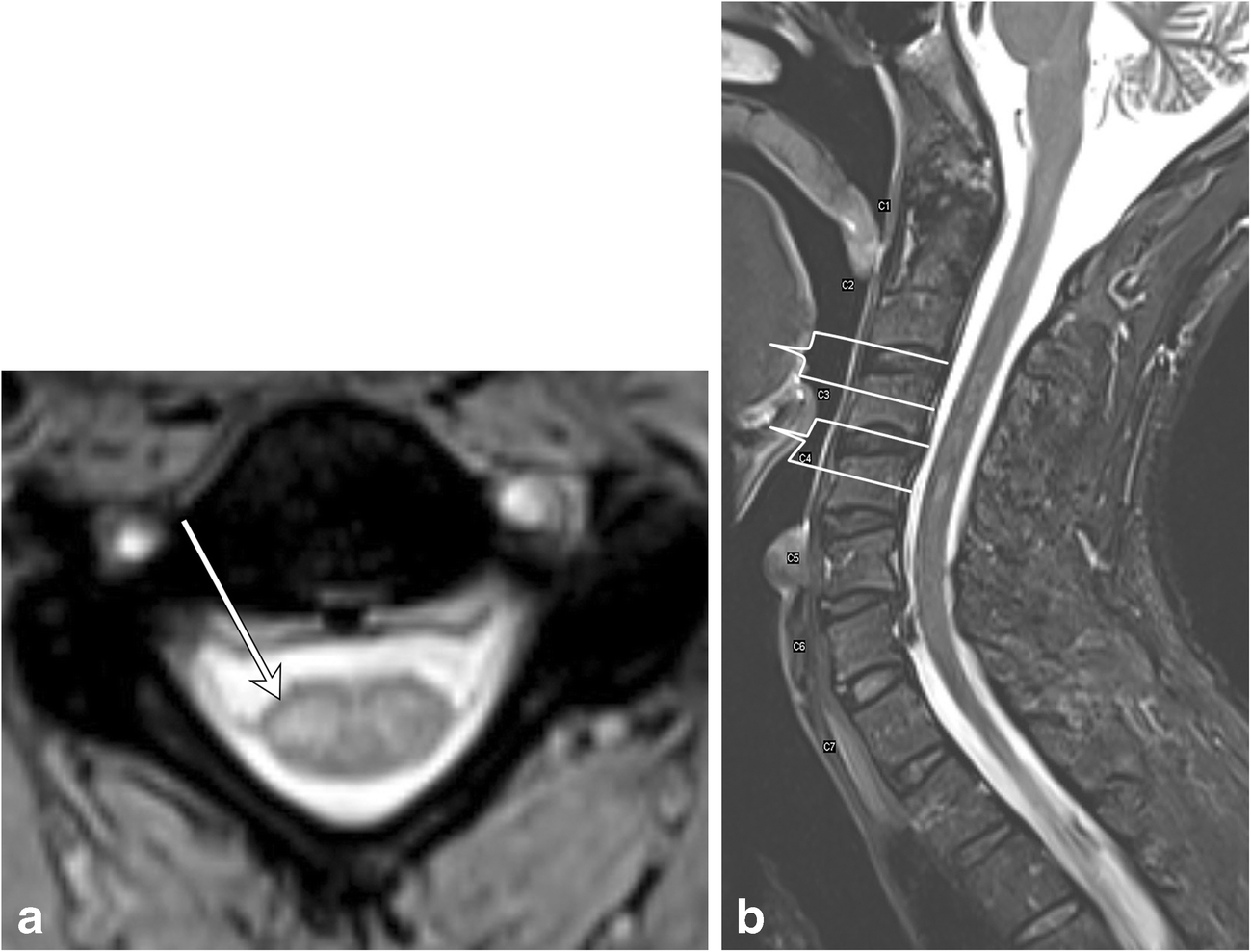 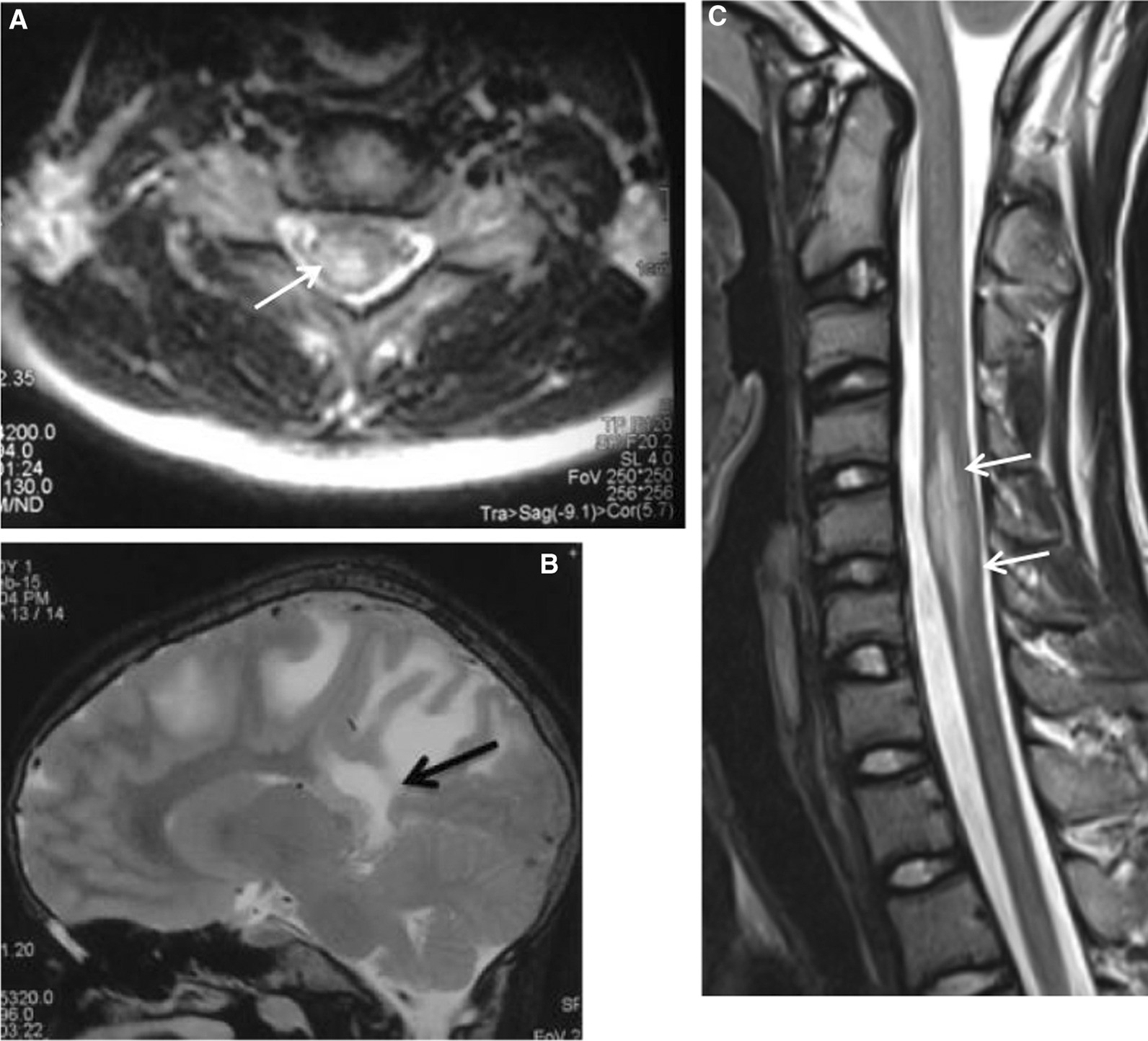 Radiological
approach to non-compressive myelopathies. Multiple sclerosis in a 13-year-old female who presented with paraparesis. T2W axial MR image of the upper cervical spine (A) shows a peripherally located wedge shaped hyperintense lesion (white arrow) which involves less than half of the cross-sectional area of the spinal cord. Sagittal T2W image of the brain (B) of the same patient demonstrates patchy areas of T2 hyperintensity in pericallosal and periventricular distribution (black arrow). Sagittal T2W MR image of the cervical and upper thoracic spine (C) in another case of diagnosed MS shows a short segment hyperintense area within the cervical spinal cord (white arrows)
ejrnm.springeropen.com • CC-by-4.0

Multiple sclerosis (MS) is a relatively common acquired chronic relapsing demyelinating disease involving the central nervous system, and is the second most common cause of neurological impairment in young adults, after trauma . Characteristically, and by definition, multiple sclerosis is disseminated not only in space (i.e. multiple lesions in different regions of the brain) but also in time (i.e. lesions occur at different times).

A number of clinical variants are recognized, each with specific imaging findings and clinical presentation. They include:

This article concerns itself primarily with classic (Charcot type) multiple sclerosis. The other variants are discussed separately.

Importantly, neuromyelitis optica (Devic disease) was considered a variant of multiple sclerosis, but is now recognized as a distinct entity, and is therefore also discussed separately.

The presentation is usually between adolescence and the sixth decade, with a peak at approximately 35 years of age . There is a strong, well recognized female predilection with a F:M ratio of approximately 2:1 .

Multiple sclerosis has a fascinating geographic distribution: it is rarely found in equatorial regions (e.g. 15 per 100,000), with incidence gradually increasing with distance from the equator (e.g. 250 per 100,000) .

Clinical presentation is both highly variable acutely, as a result of varying plaque location, as well as over time. Examples of common clinical features include :

A number of patterns of longitudinal disease have been described :

As is evident from this list, there is overlap, and in some cases, patients can drift from one pattern to another.

Upon presentation patients often have evidence of multiple previous asymptomatic lesions, and the diagnosis of multiple sclerosis can be strongly inferred. In other instances patients present with the first plaque. This is known as clinically isolated syndrome (CIS) and not all patients go on to develop multiple sclerosis.

Radiologically isolated syndrome (RIS) is another entity based on MRI brain findings which described as incidental white matter lesions suggestive of MS on imaging in a patient without associated clinical symptoms .

The exact etiology is poorly known although it is believed to have both genetic and acquired contributory components. An infectious agent (e.g. EBV), or at least a catalyst, has long been suspected due to the geographic distribution and presence of clusters of cases; however, no agent has yet been firmly confirmed. Some authors also suggested that "chronic cerebrospinal venous insufficiency" can cause or exacerbate MS but this theory has not been proven by further investigations .

Demyelination occurs in discrete perivenular foci, termed plaques, which range in size from a few millimeters to a few centimeters .

Plaques can occur anywhere in the central nervous system. They are typically ovoid in shape and perivenular in distribution.

CT features are usually non-specific, and significant change may be seen on MRI with an essentially normal CT scan. Features that may be present include:

MRI has revolutionised the diagnosis and surveillance of patients with MS. Not only can an MRI confirm the diagnosis (see McDonald diagnostic criteria for multiple sclerosis), but follow-up scans can assess response to treatment and help determine the disease pattern.

Although many sequences are contributory, the 2018 Revised Guidelines of the Consortium of MS Centers MRI Protocol for the Diagnosis and Follow-up of MS plaques lists the following core sequences :

Note: contrast is not necessary for routine asymptomatic follow-up.

Location of the plaques can be infratentorial, in the deep white matter, periventricular, juxtacortical or mixed white matter-grey matter lesions.

The aim of treatment is twofold: to curtail progression (disease-modifying agents) and symptomatic relief.

Steroids, interferon, monoclonal antibodies and autologous hematopoietic stem cell transplantation are all used. Although discussion of individual agents and therapies is well beyond the scope of this article, it is worth being aware of the main agents available and their mechanism of action :

In addition to the potential for disease progression resulting in progressive neurological impairment, a number of specific complications need to be considered. These include :

Prognosis is variable and depends on the pattern of disease a patient has (e.g. primary progressive carries a worse prognosis than relapsing-remitting).

In general, patients with relapsing-remitting MS will progress to secondary progressive disease in 10 years and will require ambulatory aids (e.g. cane/wheelchair/frame) in another 5 to 15 years . Approximately half of the affected individuals will no longer be independently ambulatory after 20 years .

Overall life expectancy is also reduced, by 7 to 14 years .

The differential diagnosis is dependent on the location and appearance of demyelination. For classic (Charcot type) MS, the differential can be divided into intracranial and spinal involvement.

For intracranial disease, the differential includes almost all other demyelinating diseases as well as:

For spinal involvement, the following should be considered: