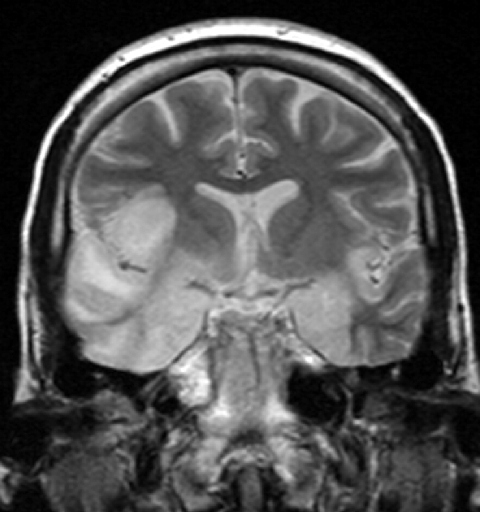 "This 33
year-old female patient presented with agitation, confusion, mutism, and fever. This coronal T2-weighted MR image shows high signal in the temporal lobes including hippocampal formations and parahippogampal gyrae, insulae, and right inferior frontal gyrus. The right gyrus rectus and the columns of the fornices were also involved (not shown). There was no associated haemorrhage or enhancement. There was moderate mass-effect. Lumbar puncture was performed - herpes simplex virus DNA was not shown on polymerase chain reaction. A brain biopsy was performed and the histology was consistent with encephalitis. PCR was repeated on the biopsy specimen and was positive for HSV type I." (dr Dawes)
Wikipedia • CC BY 3.0 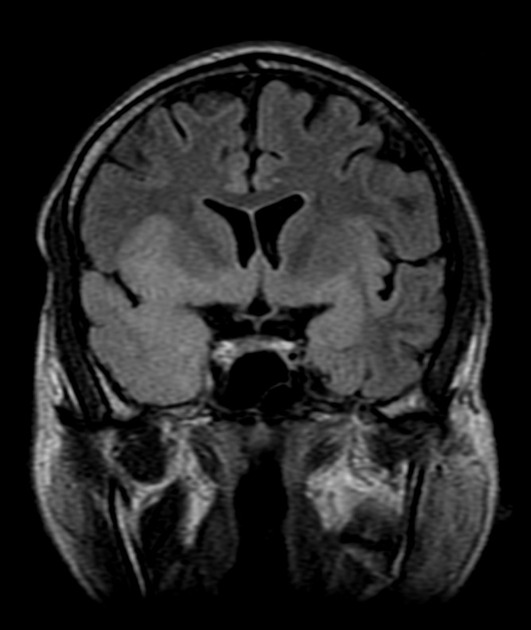 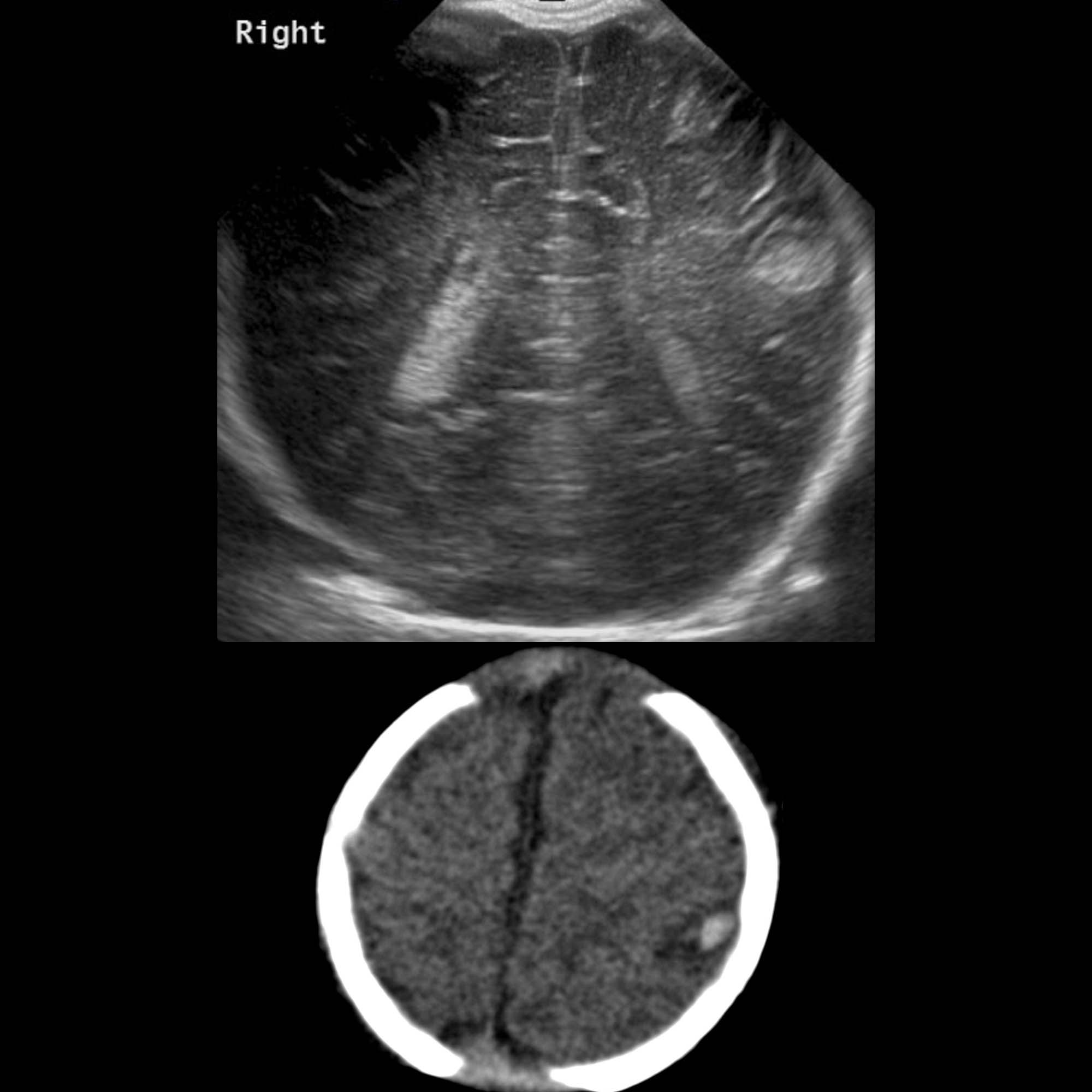 Newborn with
a full fontanelle. Coronal US of the brain (above) shows a round echogenic lesion in the left fronto-parietal region. Axial CT without contrast of the brain (below) shows the lesion to be high density with surrounding low density edema and felt to represent intraparenchymal hemorrhage. The diagnosis was herpes simplex virus-1 encephalitis.
pediatricimaging.org • CC-by-nc-sa 4.0 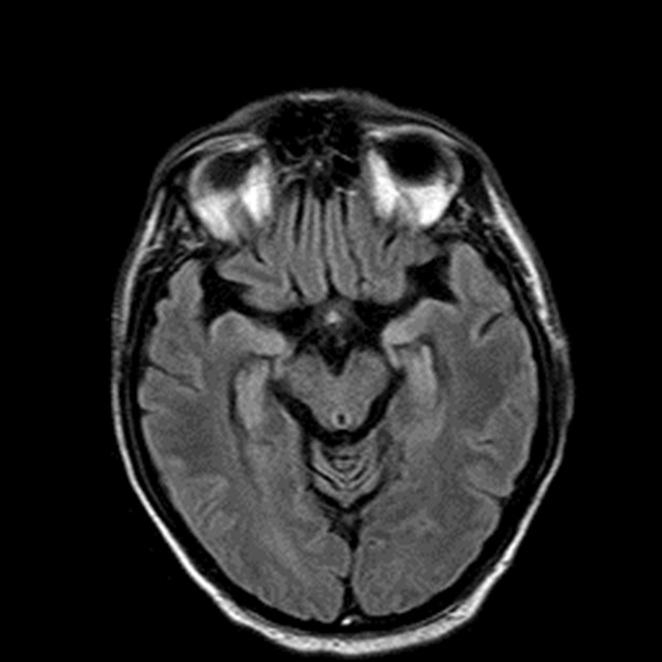 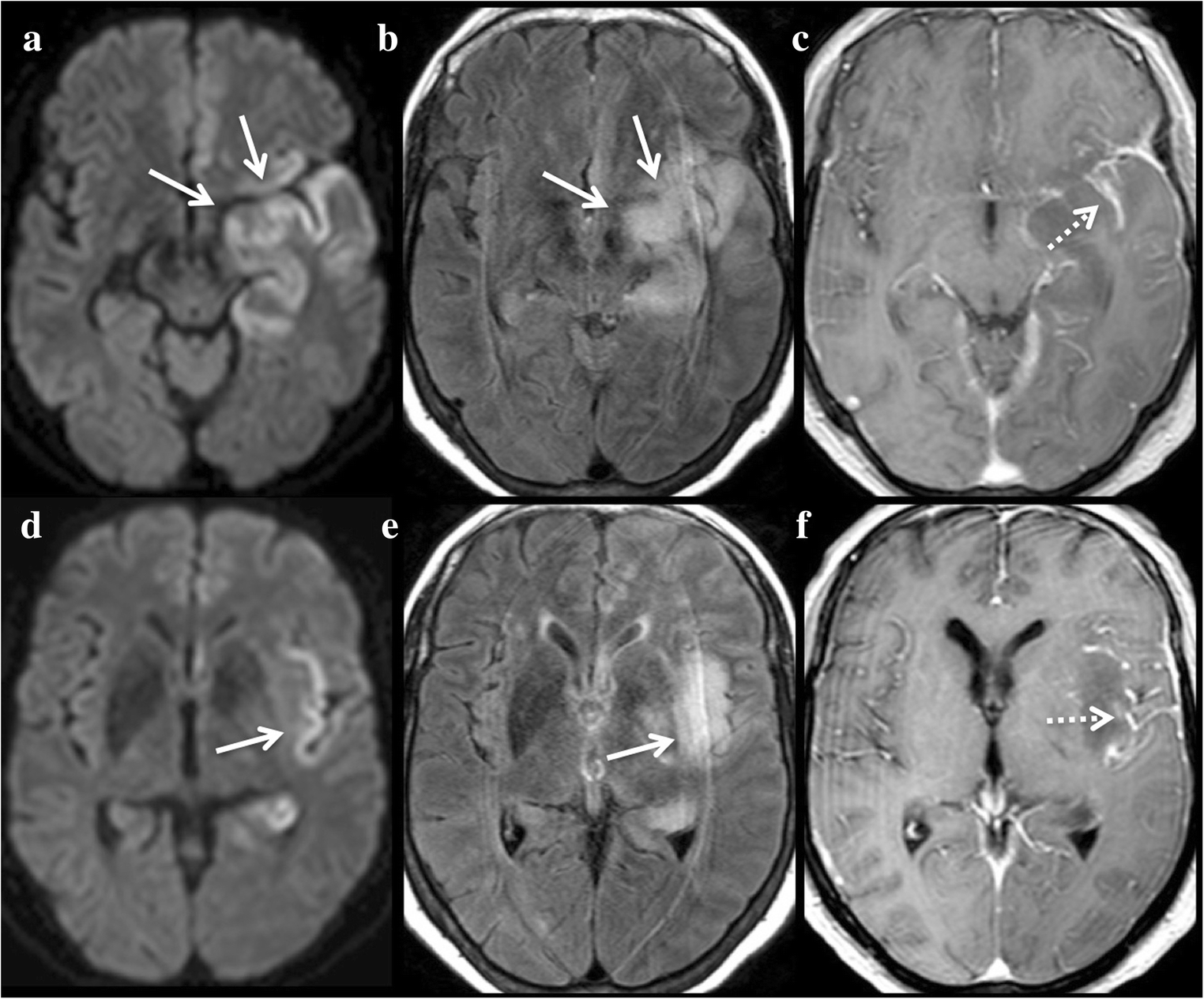 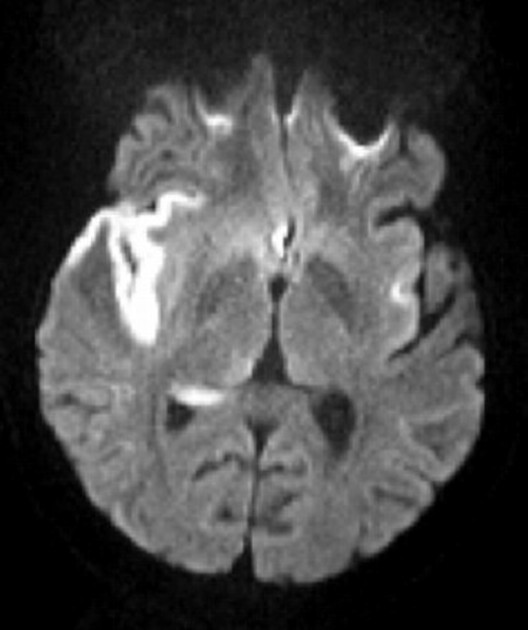 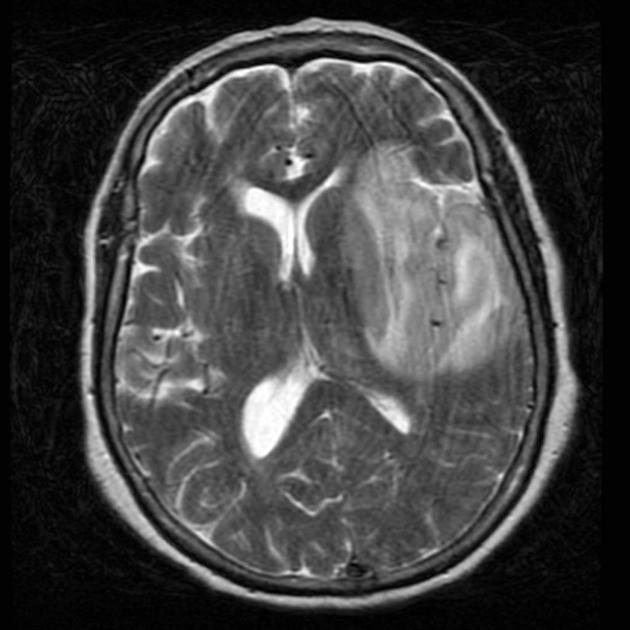 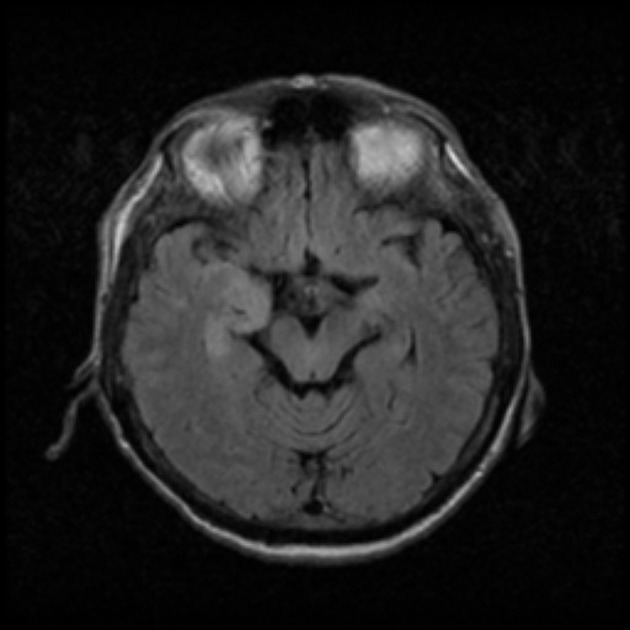 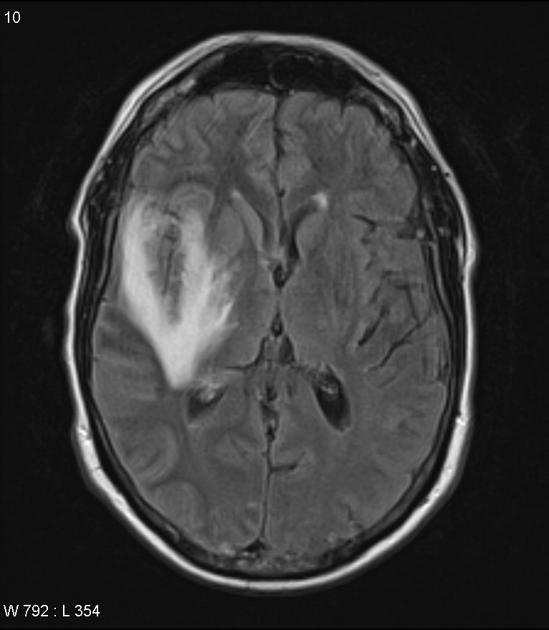 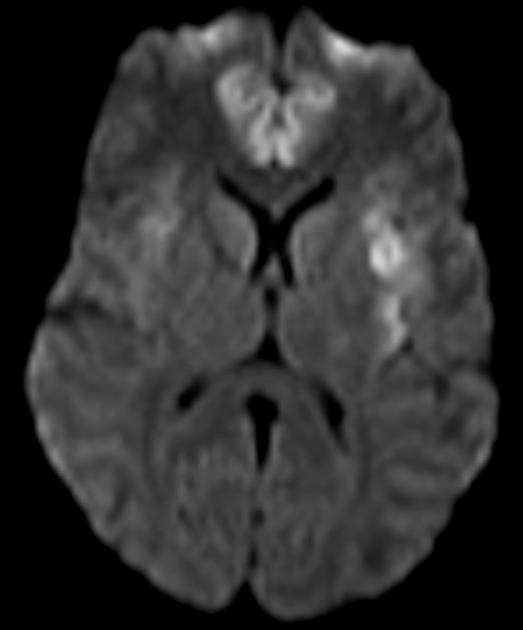 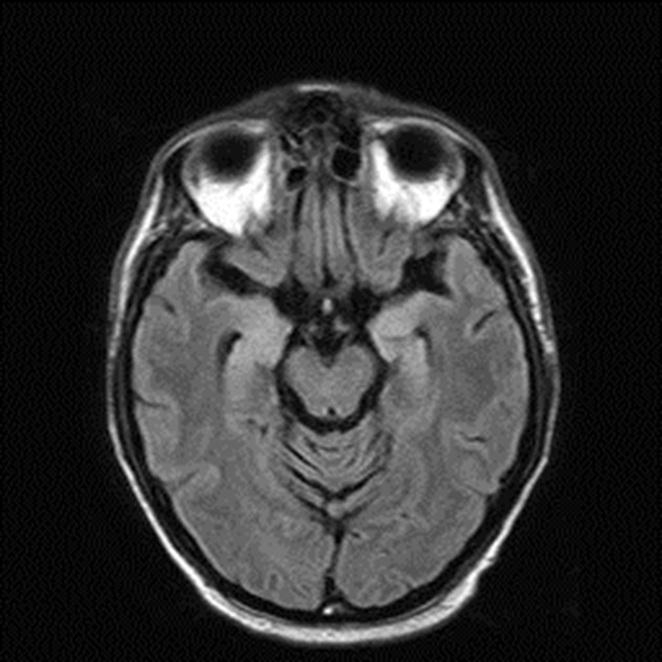 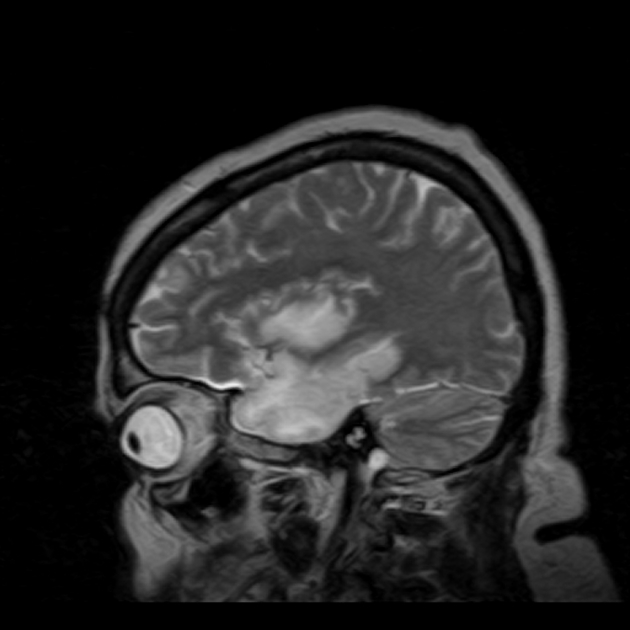 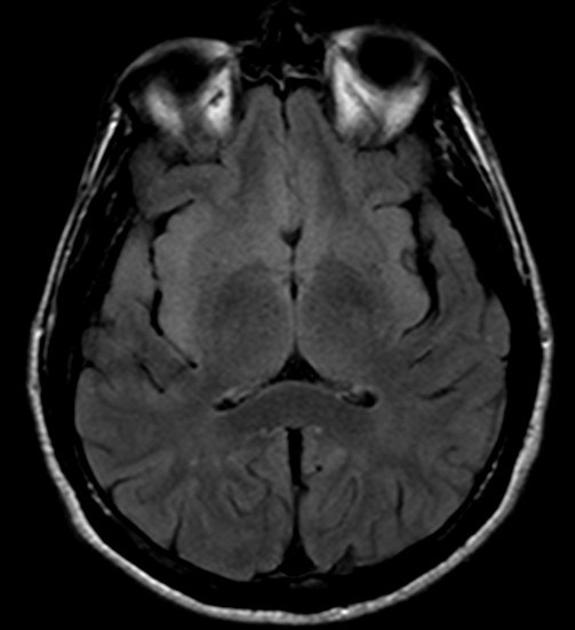 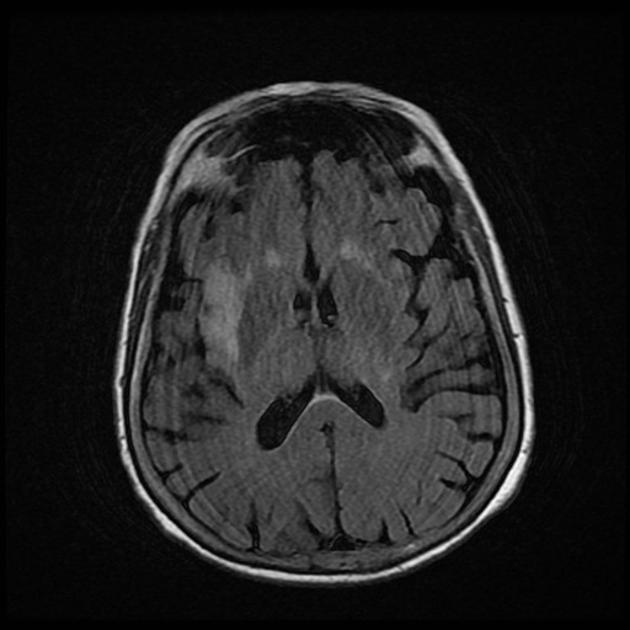 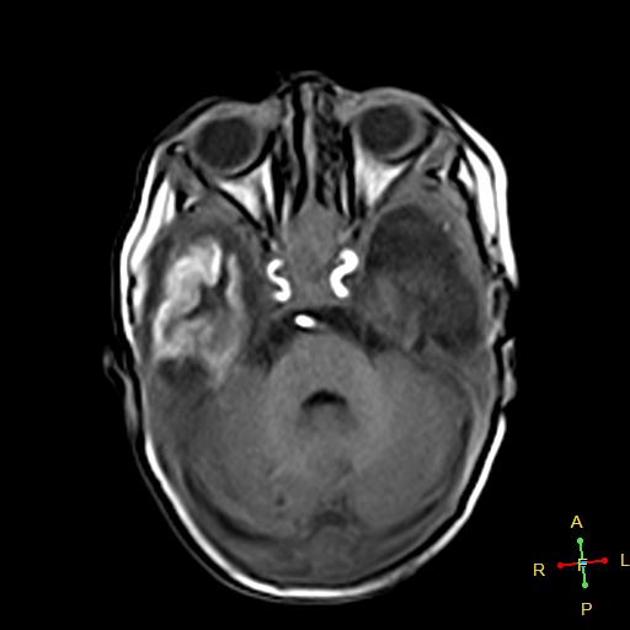 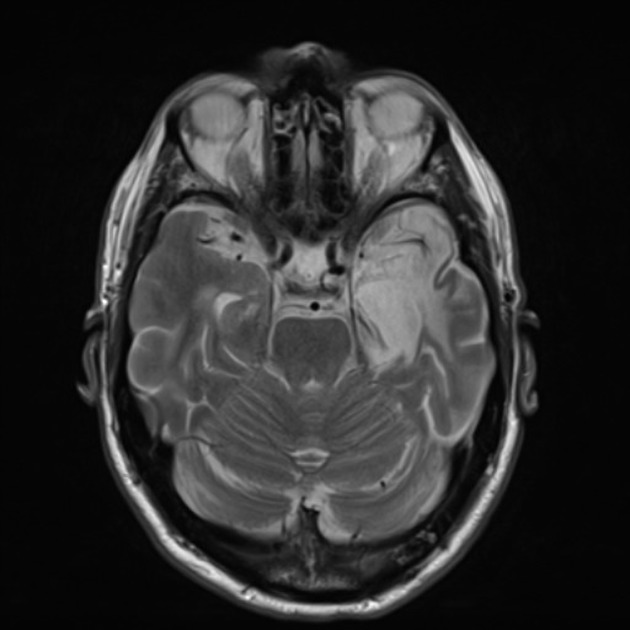 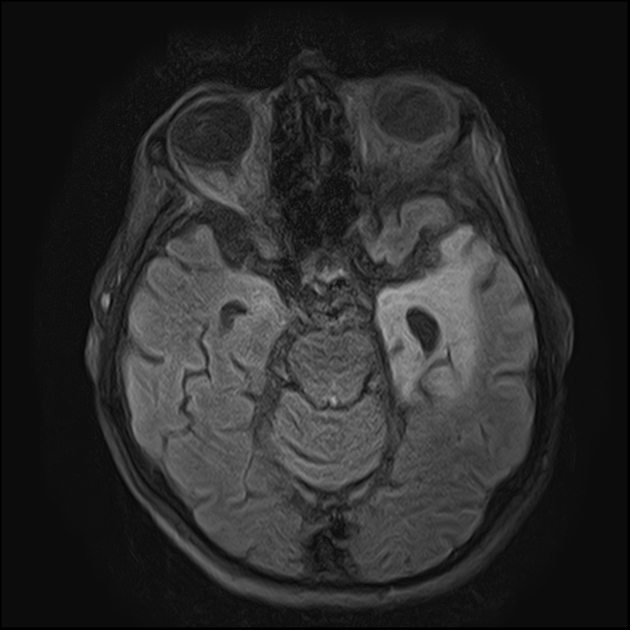 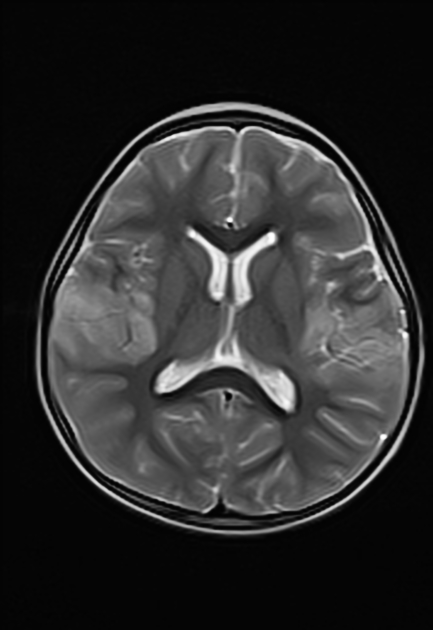 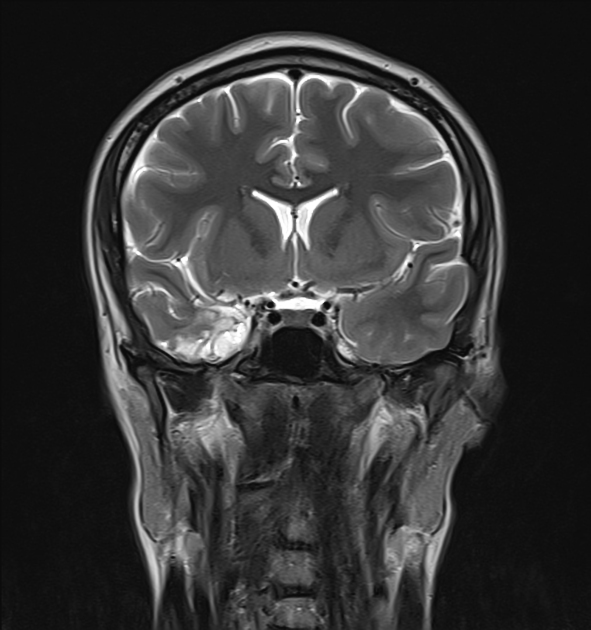 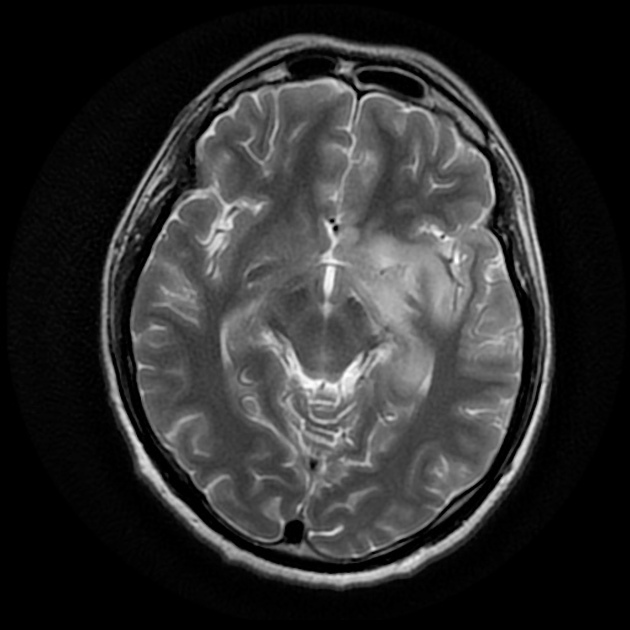 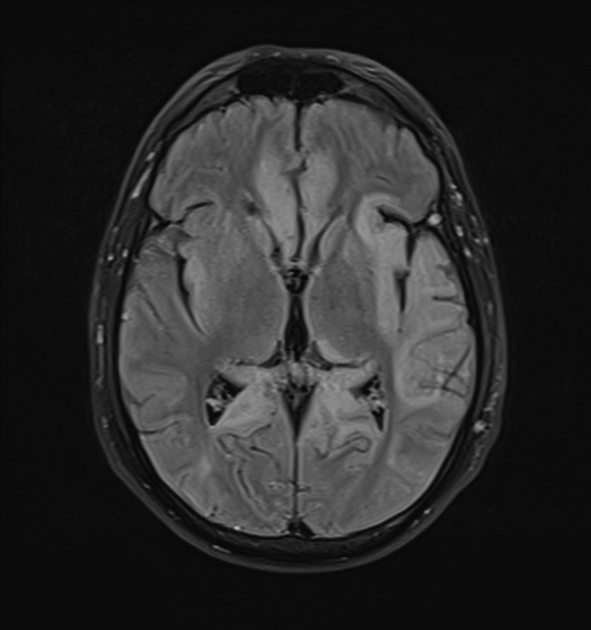 Herpes simplex (HSV) encephalitis is the most common cause of fatal sporadic fulminant necrotizing viral encephalitis and has characteristic imaging findings.

Two subtypes are recognized which differ in demographics, virus, and pattern of involvement. They are :

This article concerns itself with the latter. For a discussion of the former, please refer to the article neonatal herpes simplex encephalitis.

Childhood and adult herpes encephalitis are usually due to HSV-1 (90%) with the rest due to HSV-2 . There is no particular age, sex, or seasonal predilection.

Diagnosis is established with PCR of CSF, although the combination of the clinical scenario, CSF demonstrating pleocytosis and elevated protein, and appropriate imaging is usually highly suggestive and permits commencement of treatment.

HSV is an obligatory intracellular virus that enters via infecting nasopharyngeal cells into the sensory branch of lingual nerve then ascends to trigeminal ganglion and remains latent for a lifetime. Reactivation in the case of immunosuppression, trauma, or other stresses can result in fulminant hemorrhagic necrotizing encephalitis. HSV has a high affinity for limbic systems with bilateral but asymmetric involvement.

In the immunocompetent adult patient, the pattern is quite typical and manifests as a bilateral asymmetrical involvement of the limbic system, medial temporal lobes, insular cortices and inferolateral frontal lobes. The basal ganglia are typically spared, helping to distinguish it from a middle cerebral artery infarct.

Extralimbic involvement is more prevalent in children than in adults, seen most commonly in the parietal lobe, with sparing of basal ganglia. Eventually, it results in marked cystic encephalomalacia and volume loss in affected areas.

In immunocompromised patients, involvement can be more diffuse, and more likely to involve the brainstem .

Early diagnosis is difficult, and a 'normal' scan should not dissuade from the diagnosis. If findings are present, they typically consist of subtle low density within the anterior and medial parts of the temporal lobe and the island of Reil (insular cortex) . If scanned later then the changes may become more apparent and even progress to hemorrhage.

Contrast enhancement is uncommon during the first week of the disease. After that, a patchy low-level enhancement may be seen .

Affected areas, however, have a similar appearance regarding signal characteristics:

Treatment is with intravenous antivirals (e.g. acyclovir), and if appropriate, antiepileptics and agents to reduce intracranial pressure.

Mortality ranges dramatically depending on how early treatment is instituted. Even in patients who are young and otherwise well, and only lethargic still have a mortality of 25%. Older patients or those comatose at the time treatment is started invariably have a much poorer outcome . Overall mortality is over 70% with only 2.5% of affected patients every fully recovering .