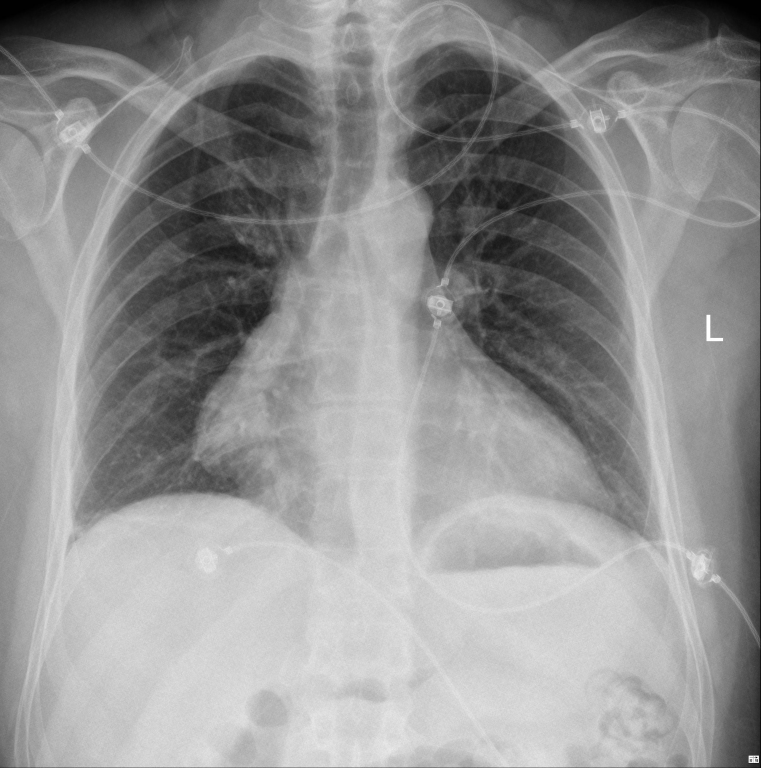 The age of presentation is wide, but the typical presentation in adults is in the third or fourth decade (the 20s and 30s). In children below one year of age, immature teratomas are common (40%) and may be detected antenatally .

The majority of patients are asymptomatic, with the mediastinal mass discovered incidentally when the thorax is imaged for another reason . Masses that become symptomatic can do so in a variety of ways:

Mediastinal teratomas are germ cell tumors arising from ectopic pluripotent stem cells that failed to migrate from yolk endoderm to the gonad. By definition, they should contain elements from all three embryological layers: endoderm, mesoderm and ectoderm. Frequently, however, elements from only two layers are evident (see teratoma article).

A mediastinal dermoid cyst can be considered a variant of mature teratoma, predominantly formed by squamous epithelium and skin appendages (ectoderm and mesoderm respectively) .

Teratomas may either be:

Mature teratomas and most immature teratomas are benign tumors, but still, carry a risk of malignancy despite being indolent initially and require close clinical, serological, and radiological follow-up, or surgical excision.  There is also a low incidence of malignant transformation of somatic cells (i.e. non-germ cell components) within these tumors, e.g. carcinoma, sarcoma, leukemia .

Usually occurs within or near the thymus gland.

Mature teratomas have been associated with:

Immature teratomas can be associated with:

The vast majority of mediastinal teratomas are located in the anterior mediastinum (80%), with most of the remainder involving multiple compartments (13-15%). Isolated posterior or middle mediastinal location is uncommon (2-8%) .

Mature teratomas, by their very nature, may contain a vast range of tissues and thus have variable imaging features. In general, they have the following features:

Appearances on chest radiography are usually indistinguishable from many of the other causes of an anterior mediastinal mass. Calcification may be visible.

CT is the mainstay of diagnosis. The appearance will depend on the type of teratoma, and whether or not a cystic teratoma has ruptured. They are all however usually located in the anterior mediastinum.

Treatment depends on whether the teratoma is mature or immature. In the former, surgical resection is curative. In the later management depends on alpha-FP levels. If these are elevated then postoperative chemotherapy is usually employed .

Prognosis of mature teratomas is excellent as they are benign tumors. Pure immature teratomas also usually have an excellent prognosis, especially in childhood. In up to 30% of cases, however, immature teratomas have a malignant germ cell tumor component (most frequently yolk sac tumor), which result in frequent (25%) recurrence. Nonetheless, with adjuvant chemotherapy, a greater than 80% three-year survival can be achieved in children. Prognosis in adults is less favorable .

On chest radiography, the differential is broad, and includes any cause of an anterior mediastinal mass:

On CT the differential is usually narrowed to tumors and depends on the morphology: