Central
pontine myelinolysis during treatment of hyperglycemic hyperosmolar syndrome: a case report. Diffusion-weighted imaging of the brain. a Image 72 h after admission. b Image 30 days after admission. Arrowheads indicate high-intensity regions in the pons
clindiabetesendo.biomedcentral.com • CC-by-4.0 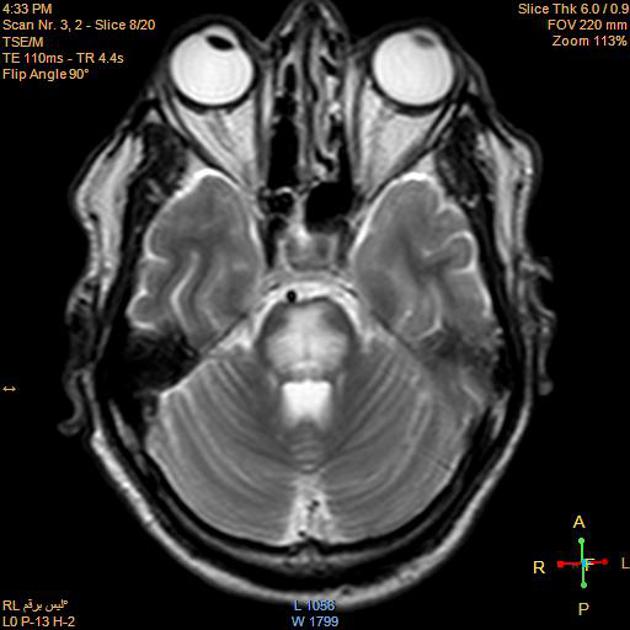 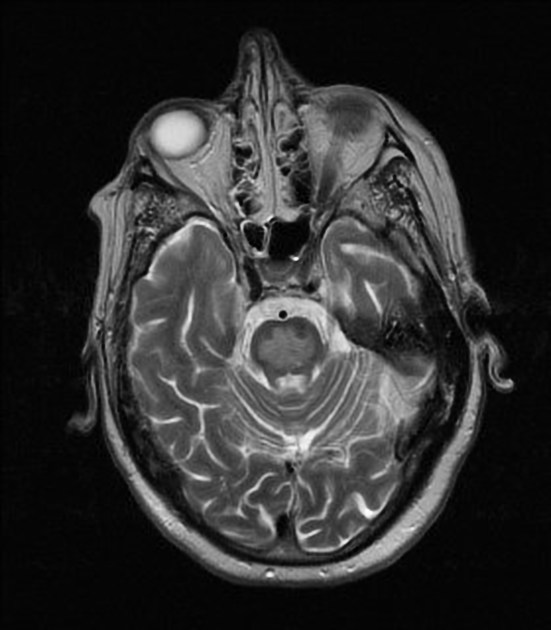 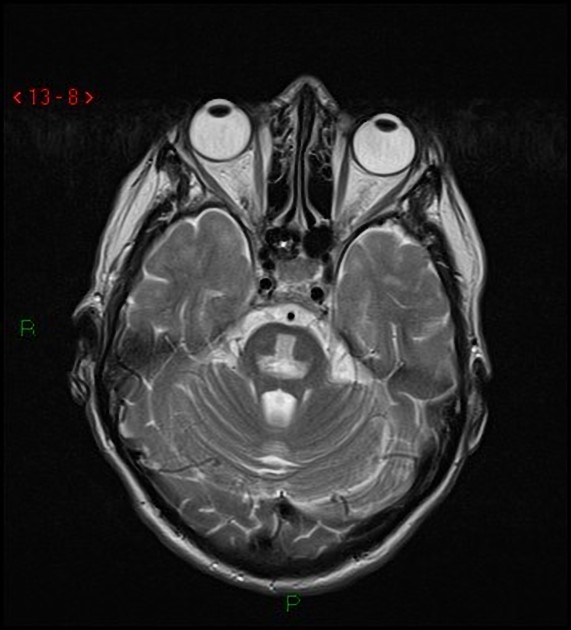 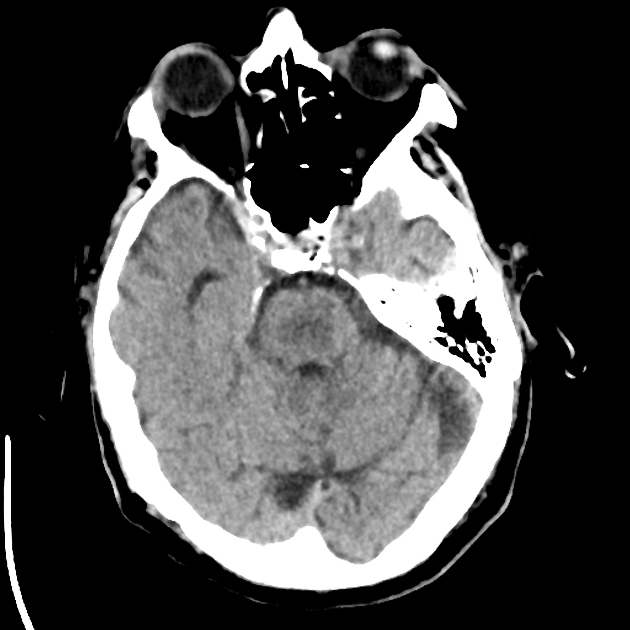 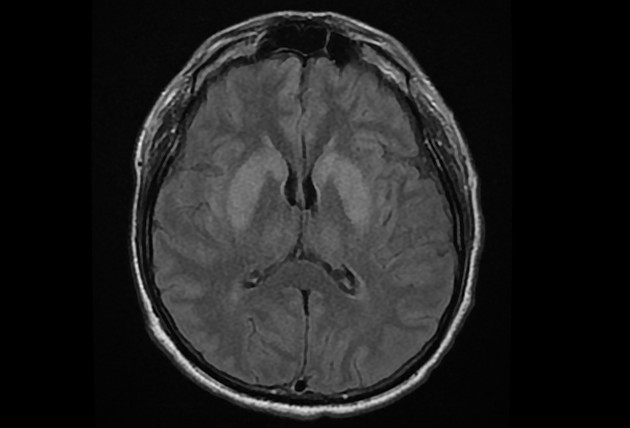 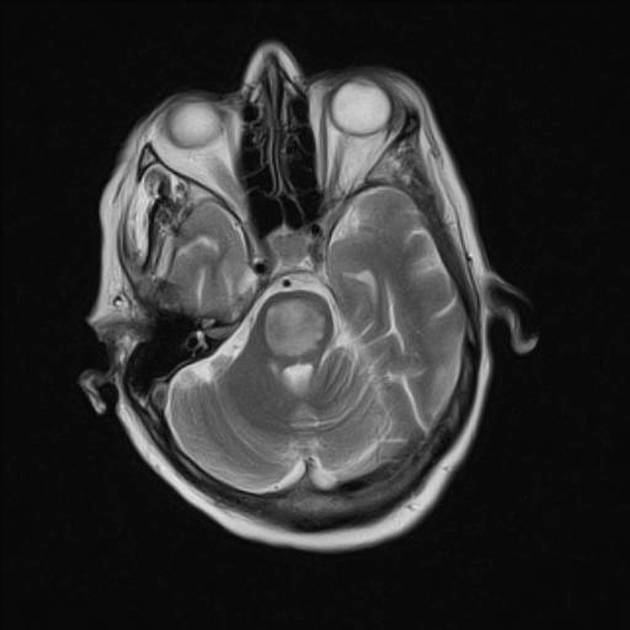 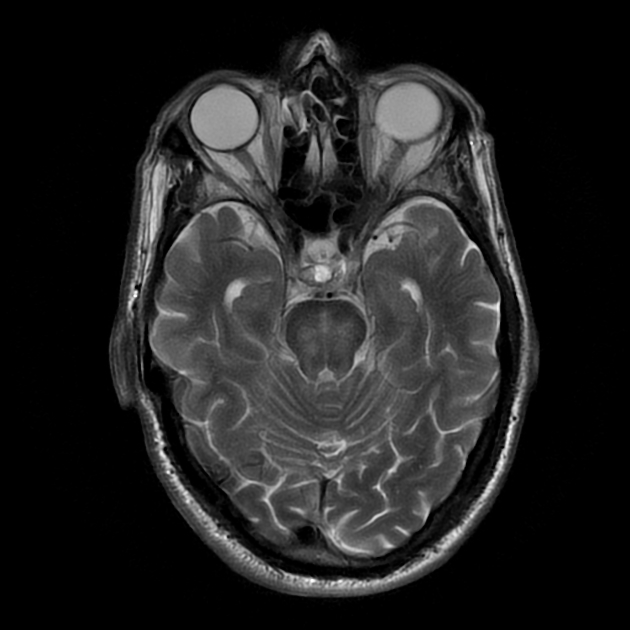 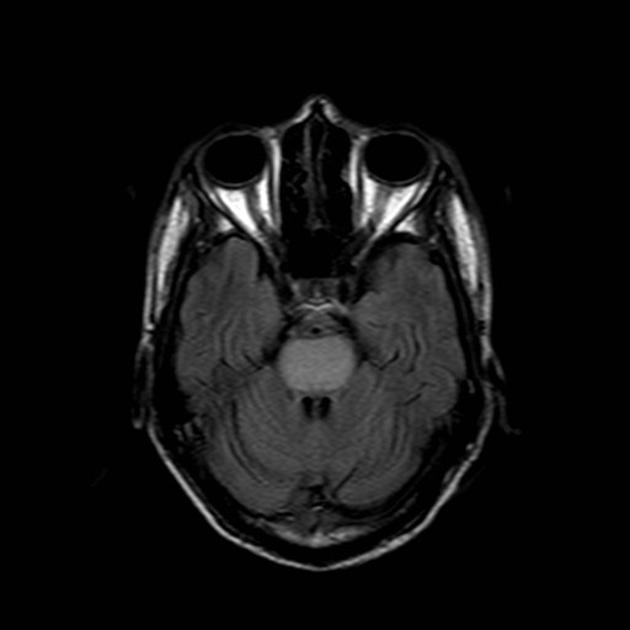 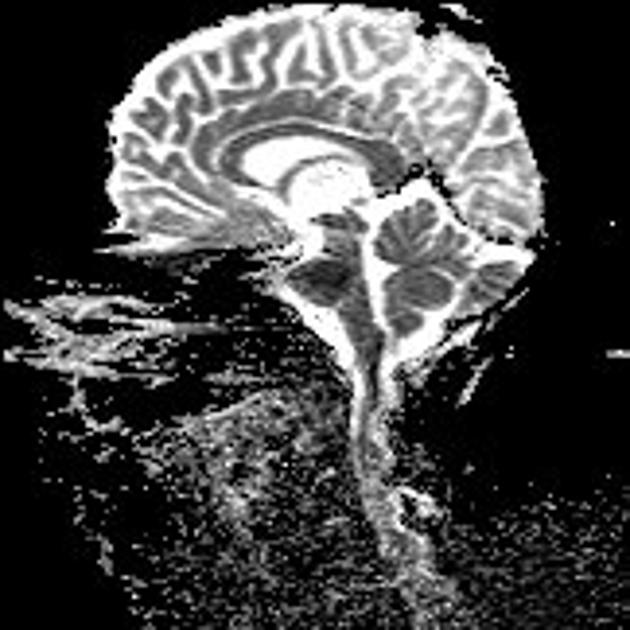 Diffuse large
B-cell lymphoma presenting with central pontine myelinolysis: a case report. Brain magnetic resonance scan. The hyperintense lesion in the central pons in T2-weighted magnetic resonance imaging decreased and was almost undetectable after several courses of chemotherapy. (a) Before treatment, (b) after two courses, and (c) after seven courses of chemotherapy
jmedicalcasereports.biomedcentral.com • CC-by-4.0 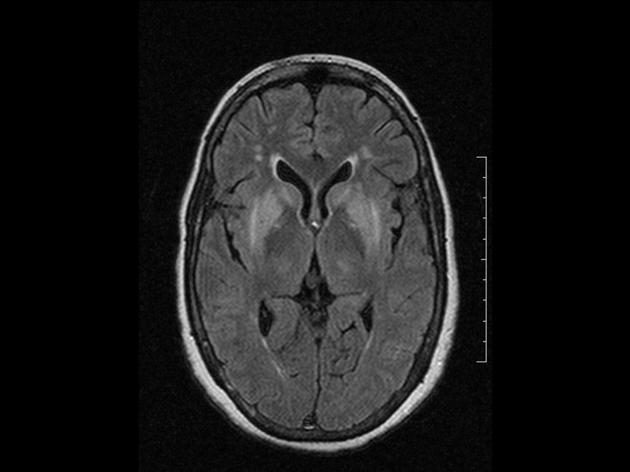 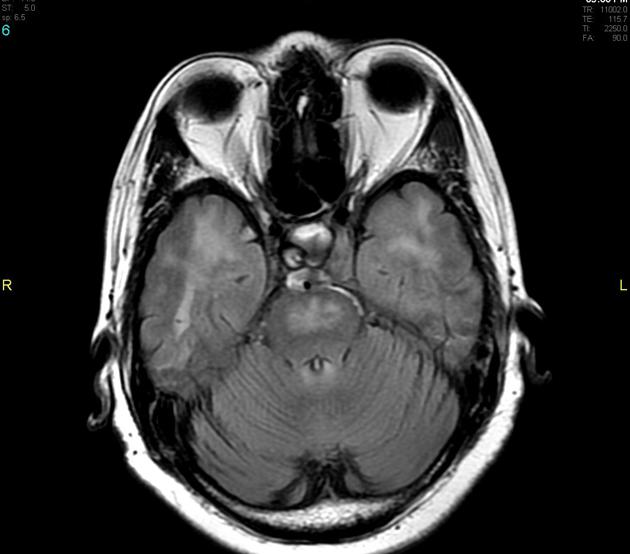 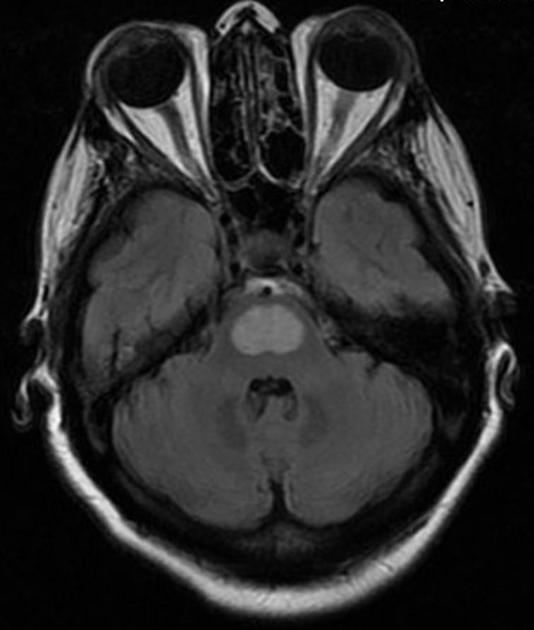 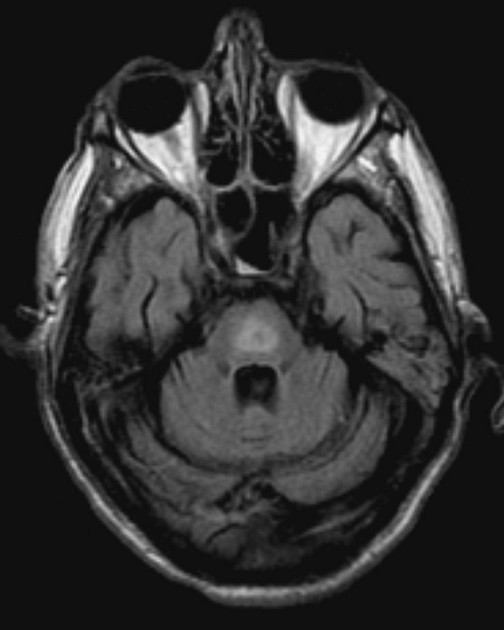 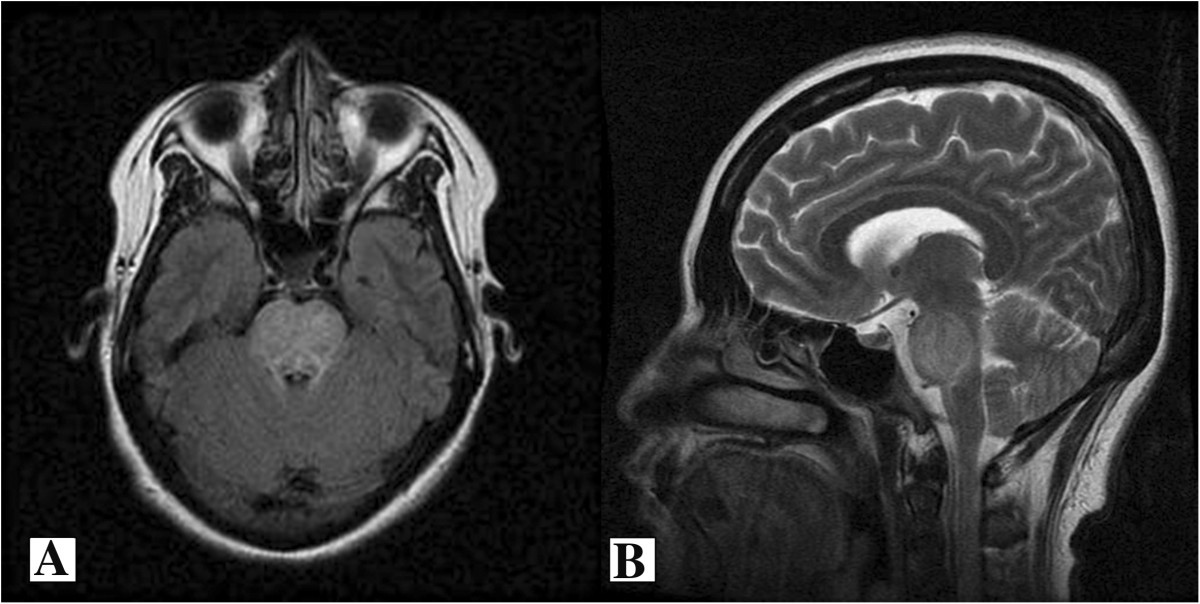 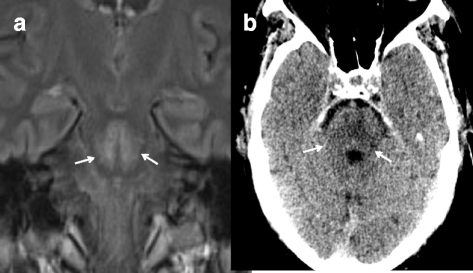 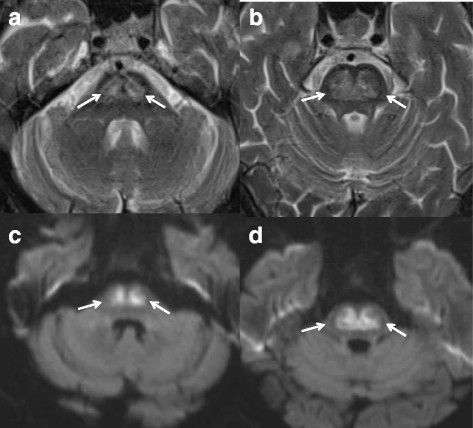 Hyperglycemia-related
central pontine demyelinization after a binge-eating attack in a patient with type-2 diabetes: a case report. MRI images of the brain (a and b: T2-weighted, c and d: B = 1000 DWI); arrows indicate the central pontine-demyelinization area
bmcendocrdisord.biomedcentral.com • CC-by-4.0 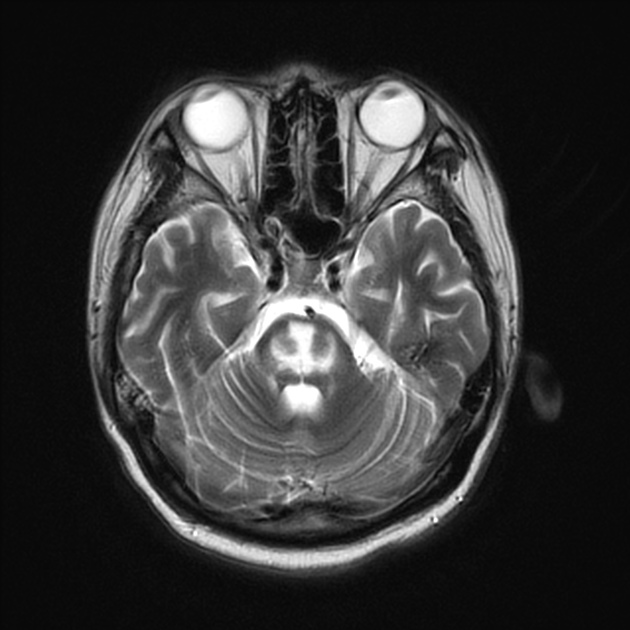 The initial description of central pontine myelinolysis by Adams et al. in 1959  was entirely in a population of chronic alcoholics, and certainly, this scenario is common. Since then it has been increasingly recognized in other patient groups, but usually in the setting of rapidly corrected electrolyte disturbance:

Clinically osmotic demyelination syndrome presents in a biphasic pattern. The first phase is usually attributable not to the demyelination but rather to the inciting electrolyte abnormality, with patients being acutely encephalopathic. Following rapid reversal of this abnormality, the patient transiently improves before progressing onto the classic osmotic demyelination syndrome features 2-3 days later. When pontine involvement is prominent, clinical features consist of:

Although the exact mechanism is still uncertain, it is known that oligodendroglial cells are most susceptible to osmotic stresses, leading to their demise. It is not surprising that the distribution of osmotic myelinolysis, therefore, parallels the distribution of these cells.

Histologically, osmotic demyelination syndrome is characterized by intramyelinic splitting, vacuolation and myelin sheath rupture . After many days, macrophages can be identified.

CT may demonstrate low attenuation crossing the midline in the lower pons. However, CT assessment of the skull base can be difficult due to beam hardening artifact and, if available, MRI is preferred.

The earliest change is seen on DWI with restriction in the lower pons. This is seen within 24 hours of the onset of quadriplegia . This same region demonstrates eventual high T2 signal and later low T1 signal. The T1 and T2 changes may take up to two weeks to develop. This region has a classic trident shaped appearance. The overall appearance on T2/FLAIR axial MR images has also been likened to the face of a pig, referred to as piglet sign. Occasionally gadolinium enhancement is also demonstrated, just as in the acute phase of multiple sclerosis (MS) plaque. The peripheral fibers (ventrolateral longitudinal fibers), as well as the periventricular and subpial regions, are typically spared.

Similar appearances are seen in other parts of the brain: basal ganglia, midbrain and subcortical white matter.

Signal characteristics of the affected region include:

Some patients completely recover, but six month survival rate is only 5-10%.