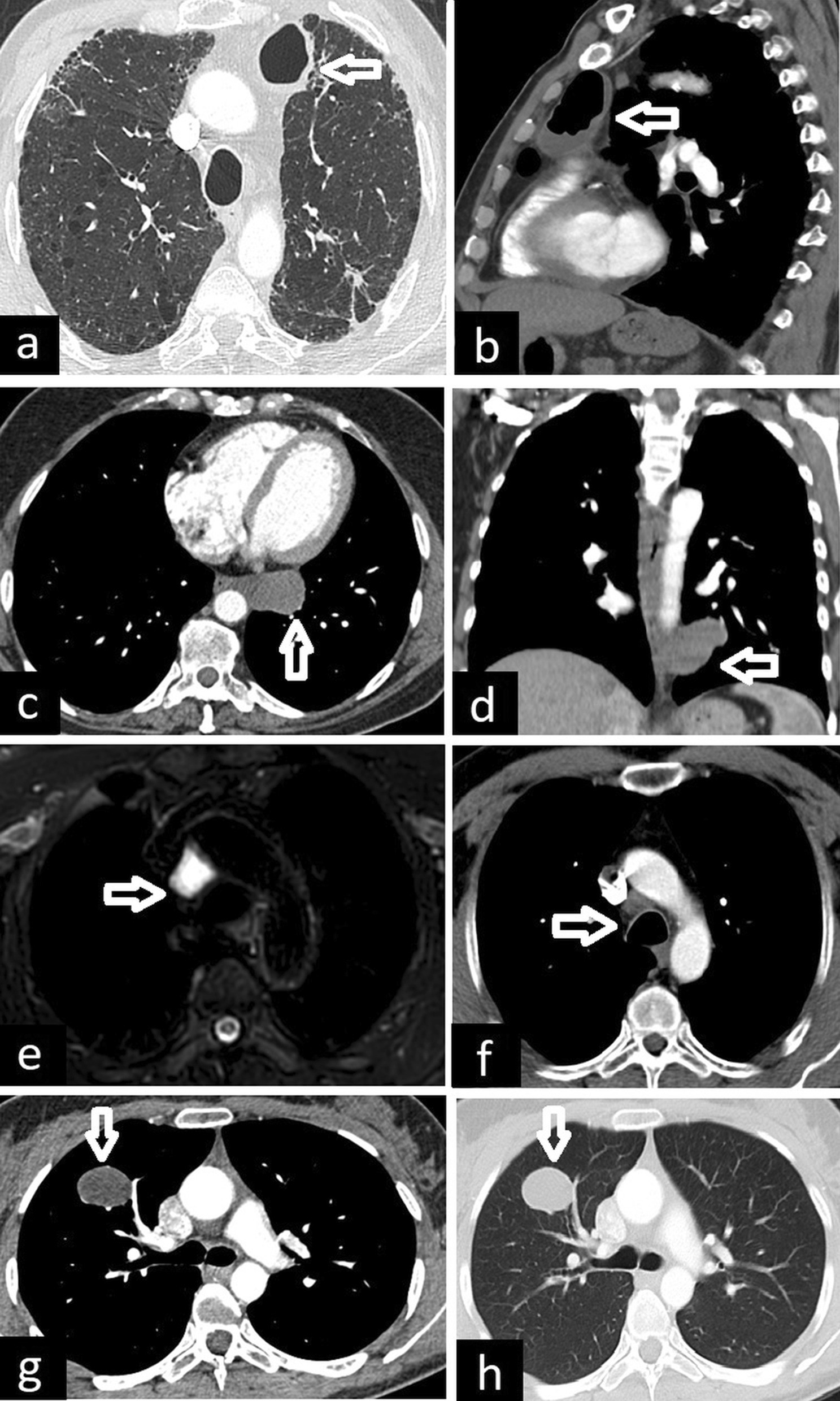 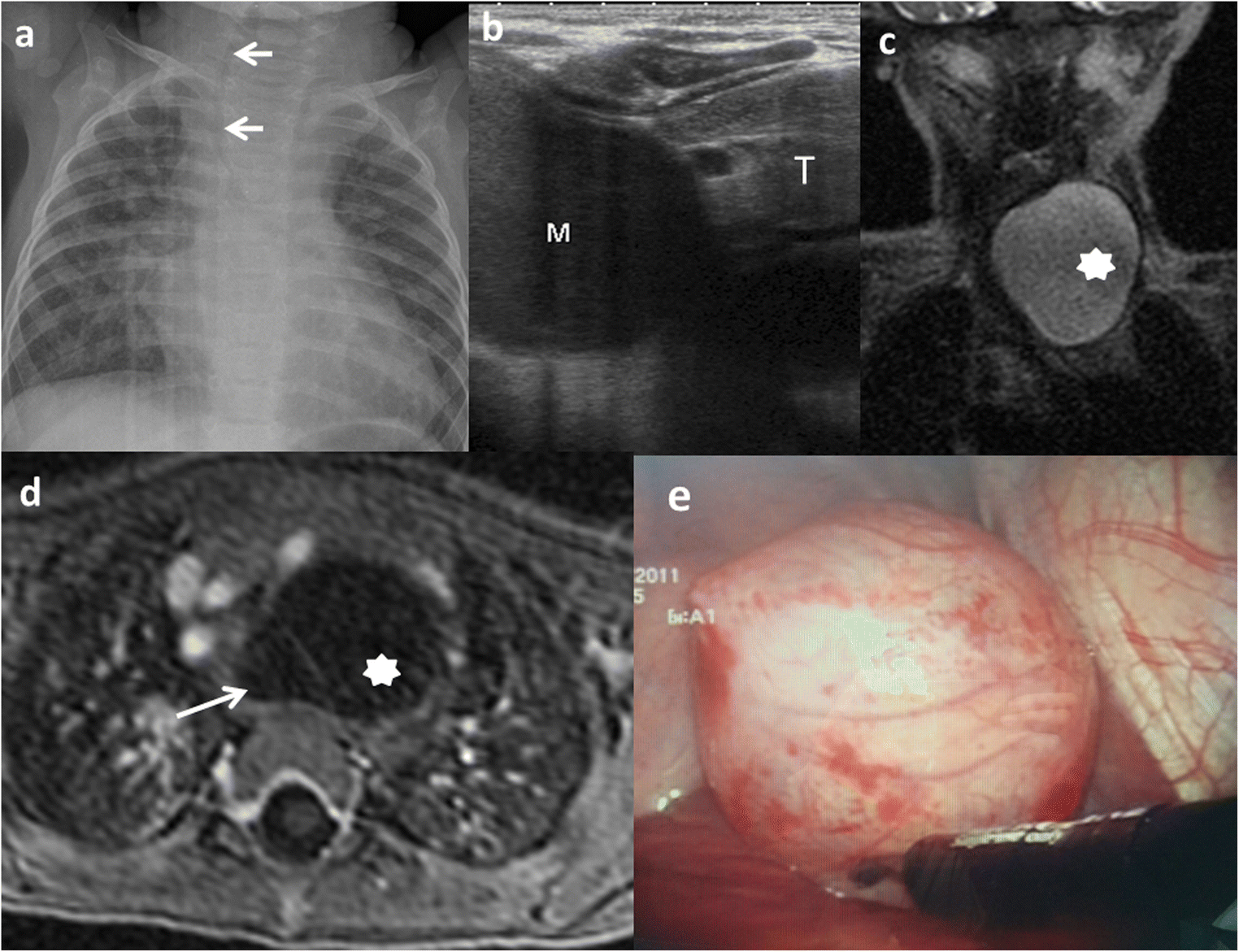 Enteric
duplication cysts in children: varied presentations, varied imaging findings. A 10-month-old boy with a congenital cardiopathy presents respiratory distress. a Chest X-ray: a left cervicothoracic mass is suspected displacing the trachea to the right (arrows). b Chest US: cystic mass (M) with slightly echogenic content inside is seen next to the thymus (T). Its origin is unclear. c Coronal view SSFSE T2 MRI: a well-delineated and hyperintense lesion (star) is seen. d Transversal view of the lesion in a gadolinium-enhanced VIBE MRI confirms the cystic nature of the mass (star) next to the anterior oesophageal wall (arrow). e Thoracoscopic findings: a 6 × 4-cm lesion with close contact with the trachea originated from the muscular wall of the oesophagus
insightsimaging.springeropen.com • Open Access

A diagnostic
approach to the mediastinal masses. Duplication cyst in a 42-year-old asymptomatic man. a Contrast-enhanced CT scan shows a round well marginated mass (arrow) adjacent to the oesophagus with homogeneous water-attenuation. b The lesion (arrow) presents a bright signal intensity on T2-weighted fat-suppressed MR image
insightsimaging.springeropen.com • CC-by-2.0 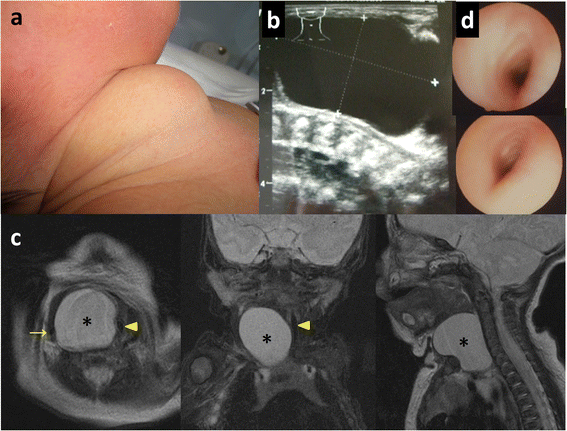 A case of
cervical esophageal duplication cyst in a newborn infant. Clinical findings in a newborn infant girl with esophageal duplication cyst. a On physical examination, there was anterior neck swelling on the right. b Ultrasonography showed a simple cyst measuring 40 × 24 × 33 mm in the right neck. c T2-weighted enhanced magnetic resonance imaging revealed a simple cyst (asterisk) that displaced the sternocleidomastoid muscle anteriorly, the carotid sheath (arrow) to the right, and the larynx and trachea (arrow head) to the left. d Bronchoscopy showed compressive deformation of the trachea from the subglottis to the carina
surgicalcasereports.springeropen.com • CC-by-4.0 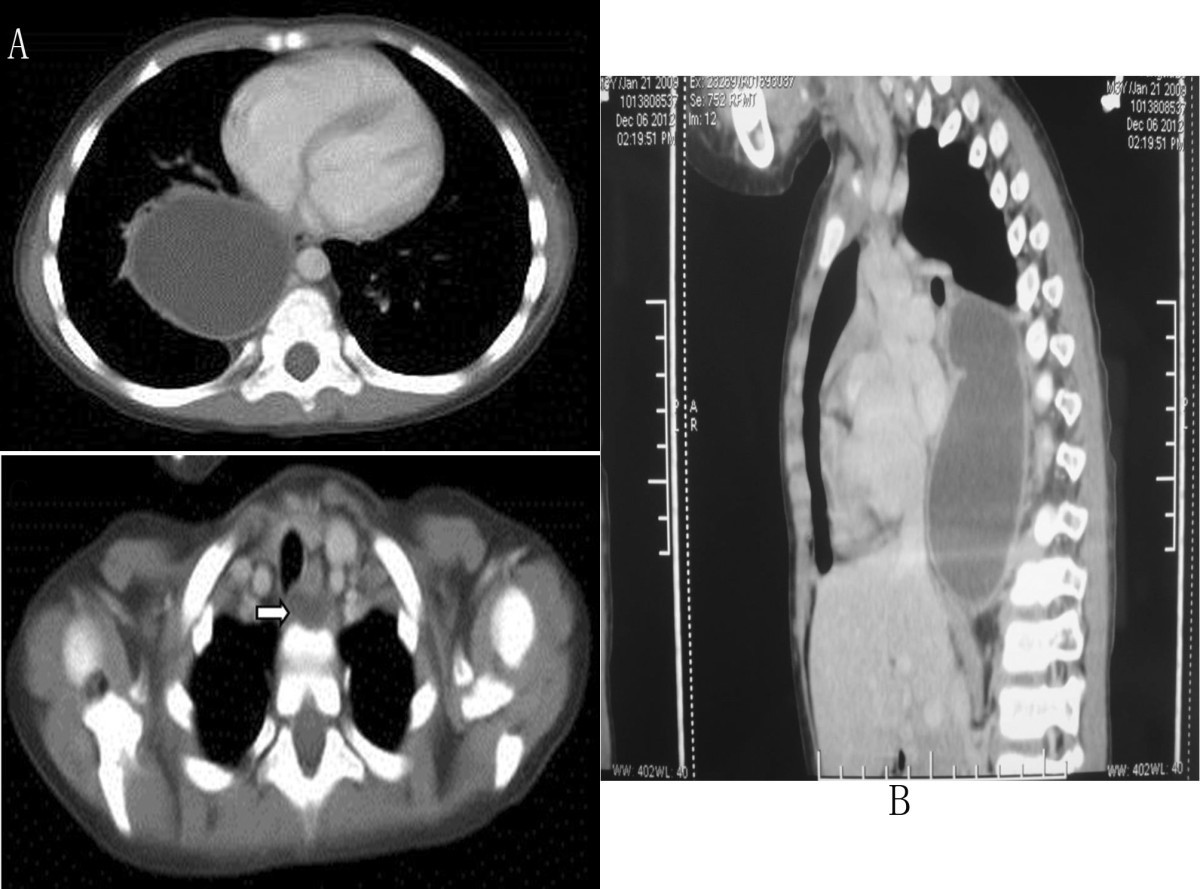 Less common compared to other foregut duplication cysts. There may be an increased male predilection .

Patients are generally asymptomatic but may complain of dysphagia due to esophageal compression. They typically present in childhood.

It mainly occurs in the thoracic esophagusand are more common on the right particularly in the distal esophagus.

On barium swallow, the cyst may cause extrinsic compression of the esophagus.

Surgical resection is the mainstay of management . Prognosis tends to be very good as recurrence is rare .

Recognized complications include carcinoma arising within the cyst . If gastric mucosa is present, peptic ulceration may occur. Very occasionally they may perforate, hemorrhage or erode into adjacent structures.

For complicated cysts (e.g. with hemorrhage/necrosis) the differential can be broader and can include: