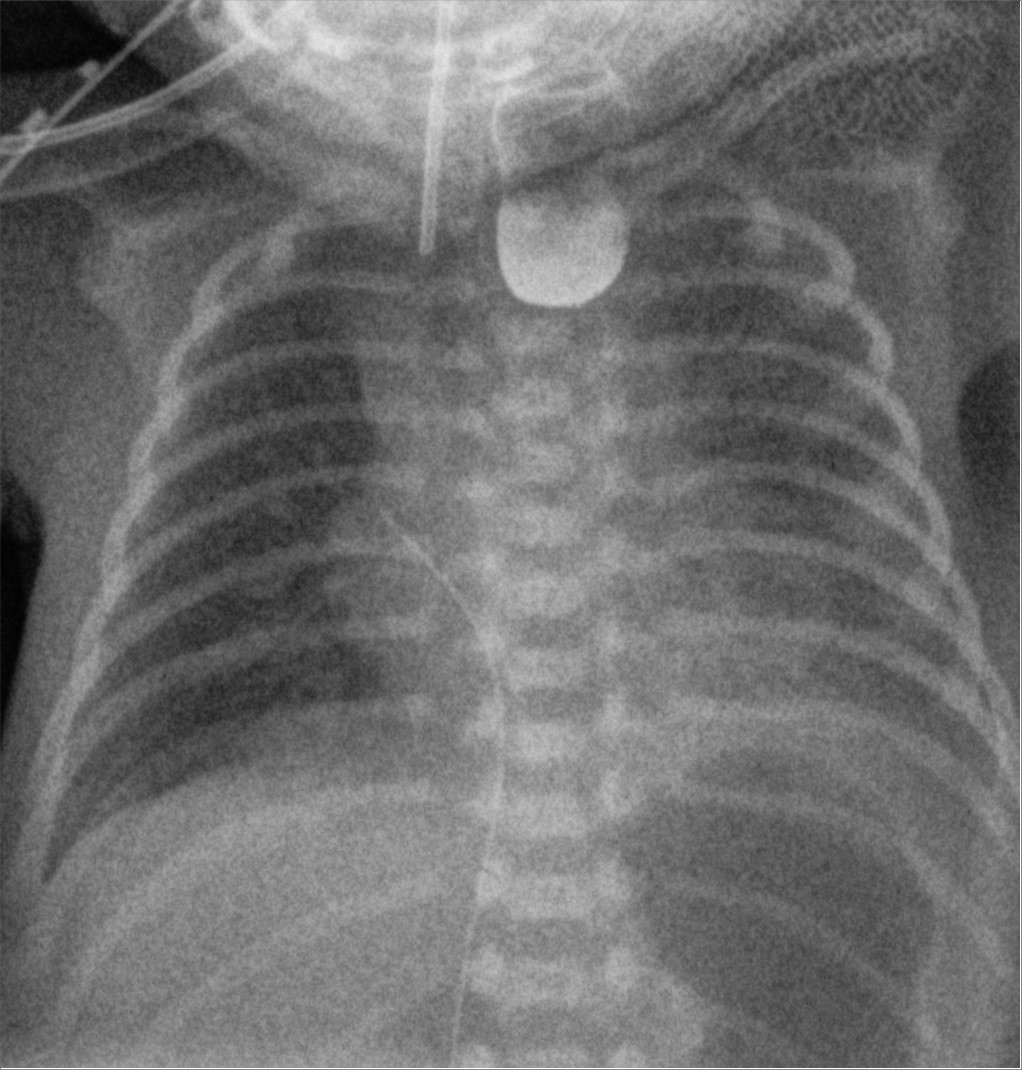 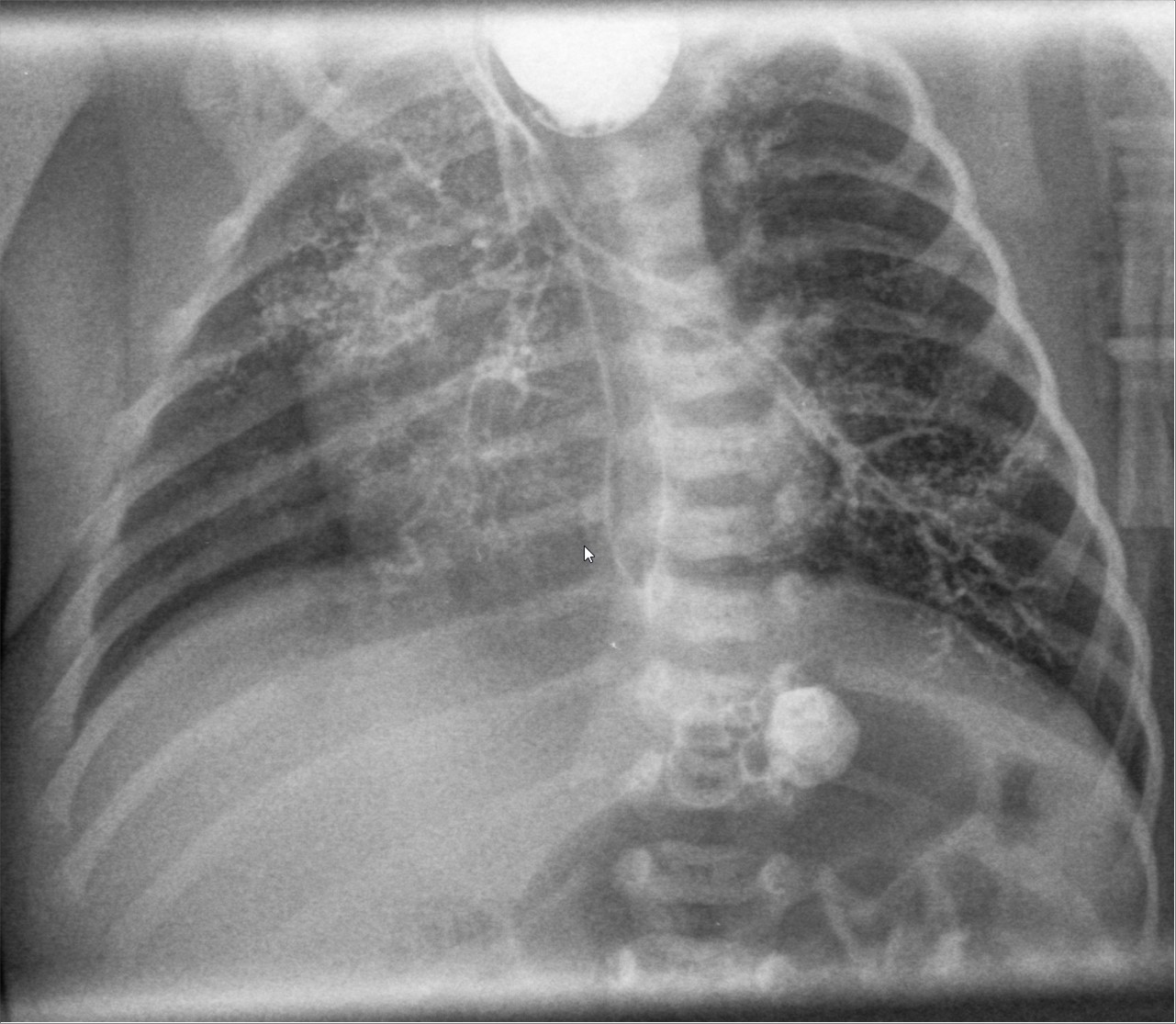 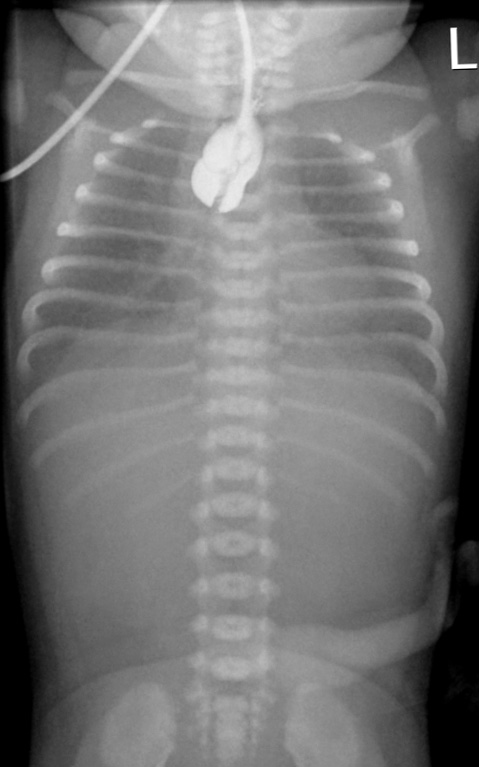 Newborn who
can’t handle their secretionsCXR shows a nasogastric tube coiled within a dilated proximal esophagus. There is gas in the stomach.The diagnosis was esophageal atresia with distal tracheo-esophageal fistula.
pediatricimaging.org • CC-by-nc-sa 4.0

Newborn with
difficulty handling secretions in whom a nasogastric tube could not be passedAXR shows a gasless abdomen. Segmentation anomalies are noted in the sacrum suggesting the presence of VATER syndrome.The diagnosis was esophageal atresia without tracheo-esophageal fistula.
pediatricimaging.org • CC-by-nc-sa 4.0

Newborn with
inability to handle secretionsCXR AP and Lateral shows a nasogastric tube that cannot be further advanced into the distal esophagus.The diagnosis was esophageal atresia without tracheo-esophageal fistula.
pediatricimaging.org • CC-by-nc-sa 4.0

Identifier:
medicaldiagnosi00gree (find matches)Title: Medical diagnosis for the student and practitionerYear: 1922 (1920s)Authors: Greene, Charles Lyman, 1862-Subjects: DiagnosisPublisher: Philadelphia, BlakistonContributing Library: The Library of CongressDigitizing Sponsor: The Library of CongressView Book Page: Book ViewerAbout This Book: Catalog EntryView All Images: All Images From Book Click here to view book online to see this illustration in context in a browseable online version of this book.Text Appearing Before Image:s upper pole. The stomach is palpated under direct observation to determine the mobil-ity and patency of the pylorus. The duodenum is also palpated and the degree to which this stimulationincreases gastric peristalsis is noted. Following the examination the patientis observed fluoroscopically at intervals as these two bismuth meals progressthrough the intestinal canal. Roentgenograms may be made from time totime, as a permanent record of any pathological condition noted, or, possibly,to reveal something overlooked on the screen. Appearance of the Normal Stomach.—The normal stomach varies ratherwidely with the sex and habit of the individual. The most common type is EXAMINATION OF THE STOM H n the perpendicular, hook-shaped 0f£a*f, with equidistant borders, the lower pole -hreaching a point about 2) £ inches below the pylorus. ! Bh*ped ,y- Another type is the semihorizontal, steerhoru-shaped stomach which lies high Stttrtem*1/;/ the abdomen with the pylorus at its lowest extremity.Text Appearing After Image:Fig. 434.—Congenital atresia of the esophagus. Note distention of stomach andintestine with air. This was explained at autopsy by a union of the distal end of theesophagus and the main bronchus. (Dr. Frank S. Bissell.) This is the type usually observed in the male of stout habitus. It israrely seen in the female. Various types, depending upon the muscu- 836 MEDICAL DIAGNOSIS Normal reten-tion periods. Significanceof delay. lar tone of the stomach, as well as the length of its mesentery are describedas: (i) Hypertonic. (2) Orthotonic. (3) Hypotonic. (4) Atonic. Motility.—An unobstructed stomach will, with rare exceptions, clear itselfof bismuth meal No. 1, within six hours after ingestion. The time of completeevacuation varies from two to six hours, depending upon muscular tone, and thedegree of acidity of the gastric contents. A delay of more than six hours dis-Note About Images Please note that these images are extracted from scanned page images that may have been digitally enhanced for readability - coloration and appearance of these illustrations may not perfectly resemble the original work.
Wikipedia • No restrictions 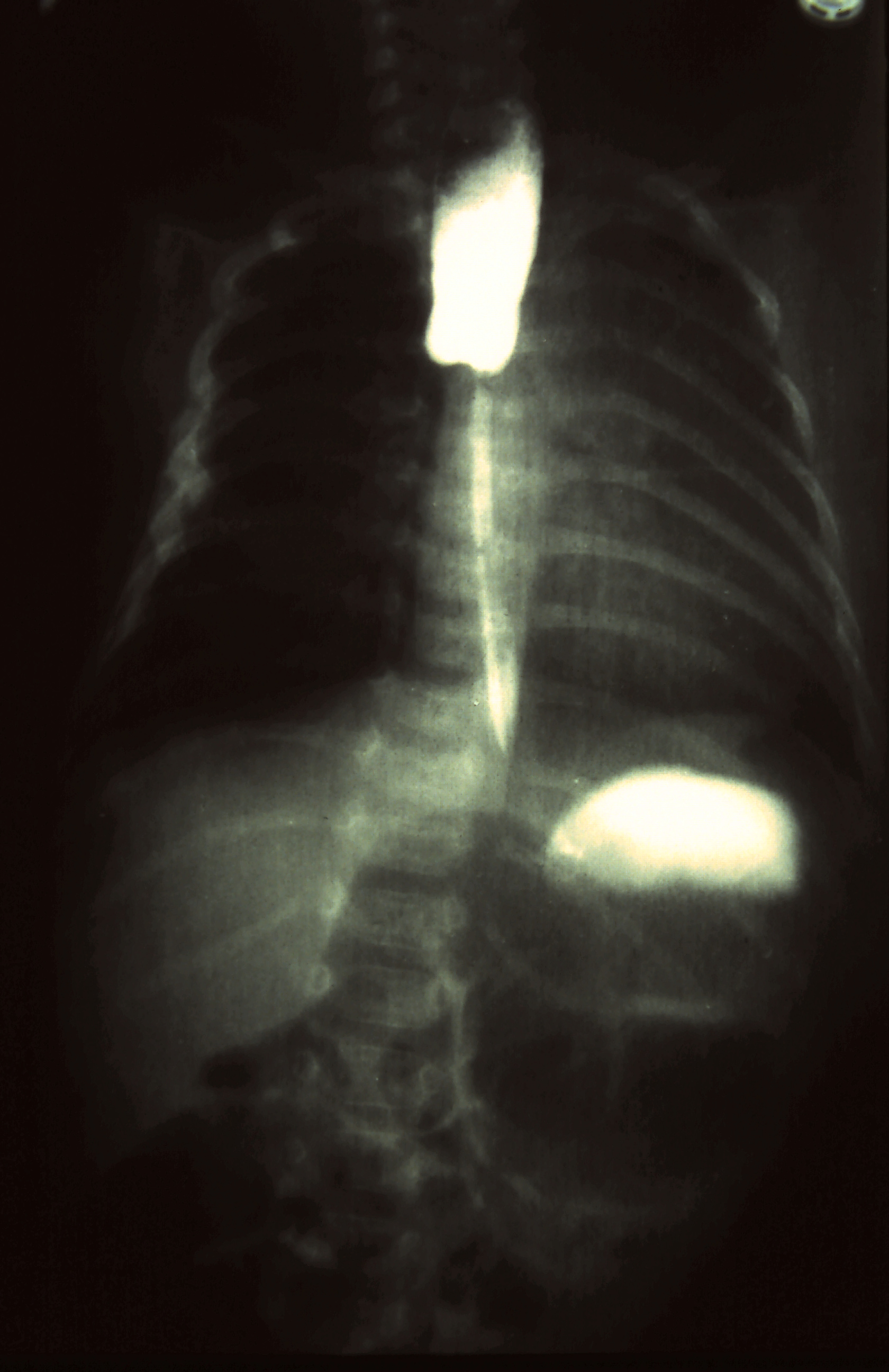 Esophageal atresia refers to an absence in the continuity of the esophagus due to an inappropriate division of the primitive foregut into the trachea and esophagus. This is the most common congenital anomaly of the esophagus.

Esophageal atresia may be suspected on antenatal ultrasound (see below) or in the neonate due to inability to swallow saliva or milk, aspiration during early feedings, or failure to pass a nasogastric tube into the stomach successfully.

It results from a failure of the primitive foregut to divide into the trachea anteriorly and the esophagus posteriorly. This usually occurs at ~ the 4 week of gestation.

Most cases have a sporadic occurrence .

Esophageal atresias are frequently associated with various other anomalies (50-75% of cases). They include

Contrast swallow may show contrast blindly ending and pooling in an esophageal stump and/or may show evidence of the tracheo-esophageal fistula. Fluoroscopy is particularly useful in demonstrating H-type fistula. A withdrawal esophagogram is performed for a H-type fistula. The patient is positioned prone and a horizontal beam is used, contrast material is injected through the nasogastric tube into the distal esophagus while the tube is slowly withdrawn under fluoroscopy . If the imaging study fails to locate the fistula while there is high suspicion then combined bronchoscopy and esophagoscopy is used . The gap between esophageal pouches is determined by inserting a Higer dilator through gastronomy into the distal esophagus and Repogle tube into proximal pouch; both tubes are radiopaque .

Surgical intervention with a re-anastomosis can be attempted post delivery. The prognosis is variable dependent on other associated anomalies.