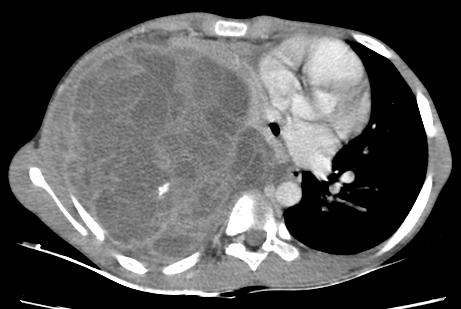 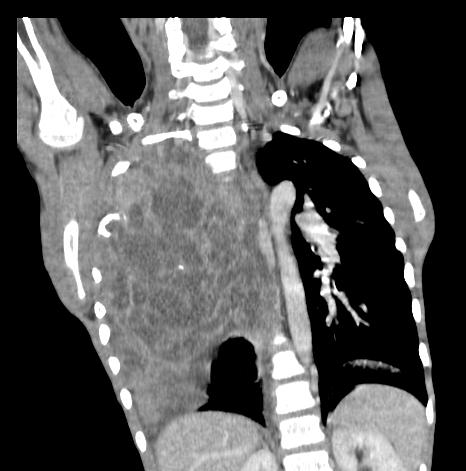 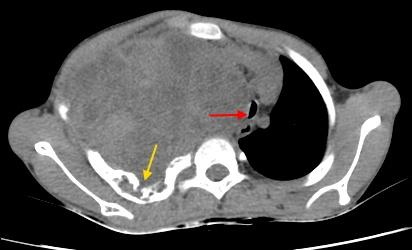 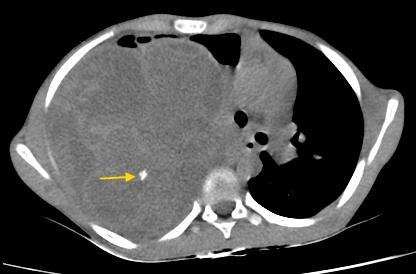 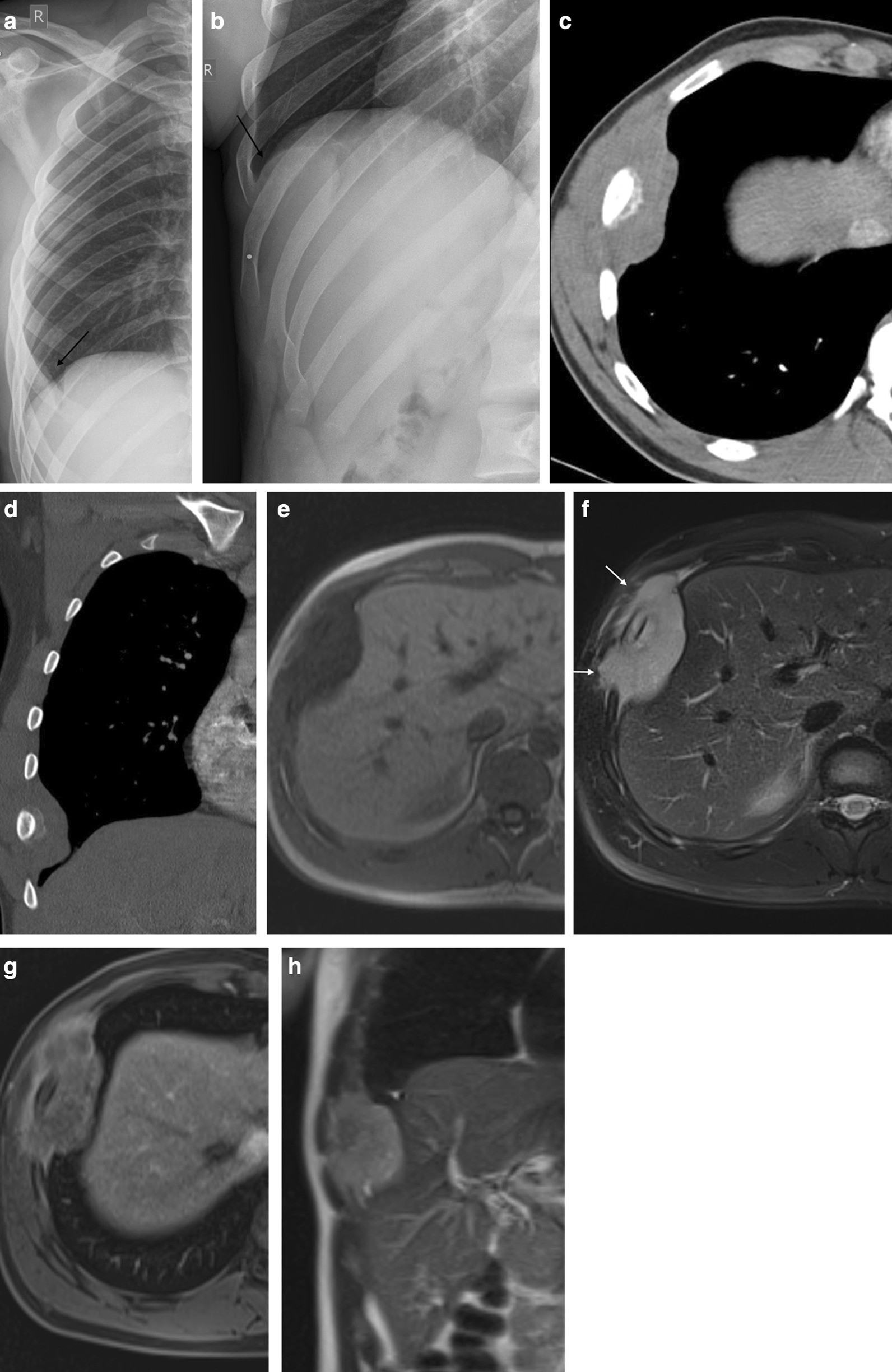 Tumor and
tumorlike conditions of the pleura and juxtapleural region: review of imaging findings. Diagnosis: Ewing sarcoma. Technique: standard chest radiography and contrast-enhanced chest CT. Description: A 23-year-old man was referred for a chest radiograph due to pain at the right hemithorax. The postero-anterior chest radiographs (a, b) show an opacity (arrow) projecting at the level of the 7th right rib. An external radio-opaque marker was placed on the painful area. The additional contrast-enhanced CT further characterizes the mass encasing the 7th right rib with a locoregional aggressive periosteal sunburst type reaction and a surrounding soft tissue component (c, d). On the axial T1-weighted MR image (e) the lesion has an isointense signal to muscle and a high signal intensity on the axial FS T2-WI (f) with invasion of the muscles of the chest wall (arrows). After intravenous contrast administration, the lesions show a heterogeneous enhancement (g), predominantly at the periphery of the lesion. The coronal T2-weighted MR image (h) shows the extrinsic impression of the lesion on the liver
insightsimaging.springeropen.com • CC-by-4.0 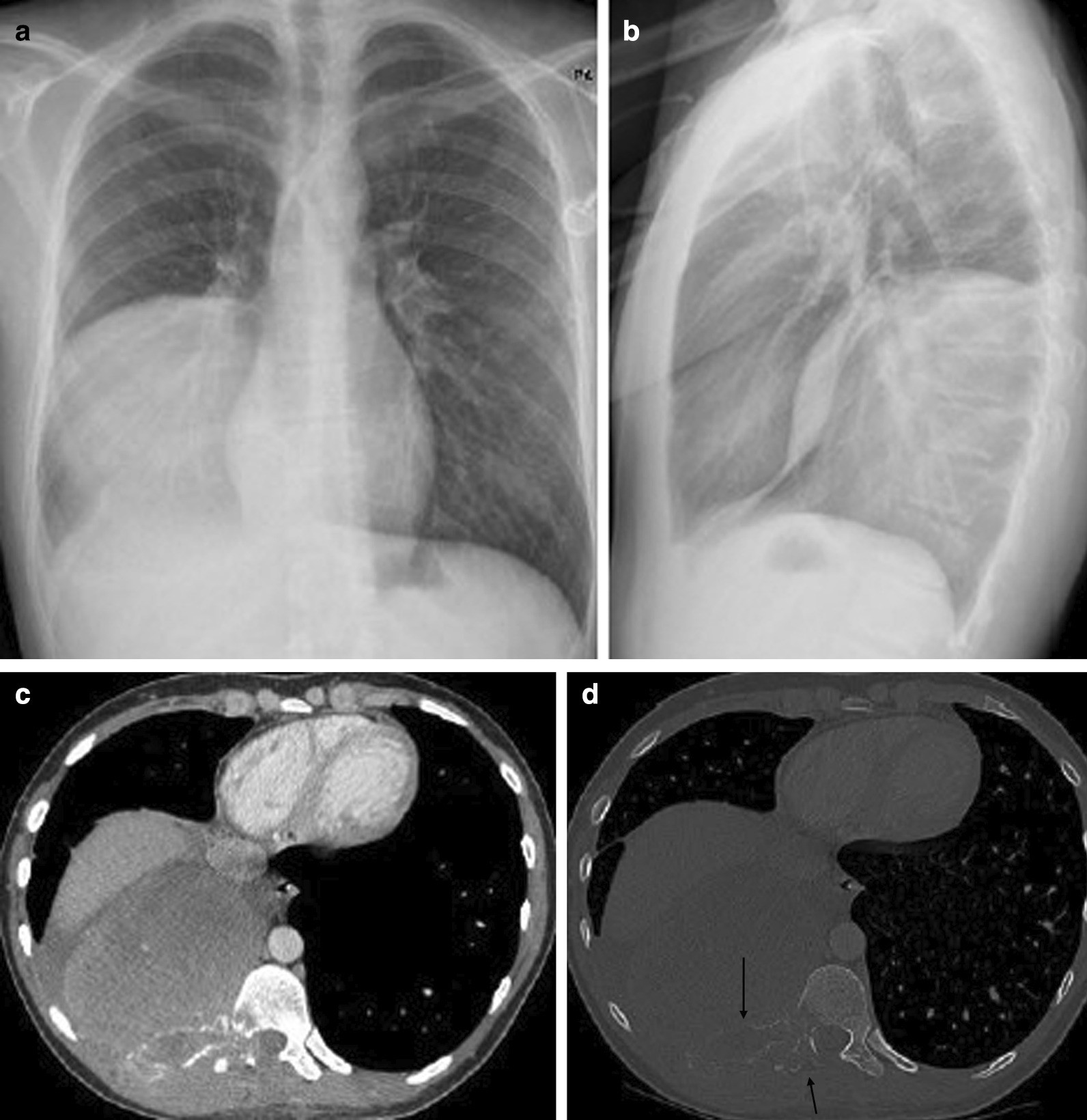 Tumor and
tumorlike conditions of the pleura and juxtapleural region: review of imaging findings. Diagnosis: extraskeletal Ewing sarcoma. Technique: standard chest radiography and contrast-enhanced chest CT. Description: A 17-year-old man presented with localized right-sided chest pain. Postero-anterior and lateral chest radiographs (a, b) show a well-delineated mass located posterior in the right lung. Axial contrast-enhanced CT (c) in the mediastinal window setting shows a heterogeneous mass with intralesional necrosis and focal bony destruction of the corpus of the vertebra, pedicle, and the posterior side of the rib (arrows), best seen in the bone window (d). The young age of the patient, locoregional bone destruction, and extensive soft tissue component is suggestive of an extraskeletal Ewing sarcoma
insightsimaging.springeropen.com • CC-by-4.0
Hallo!
Radiopaedia • CC-by-nc-sa 3.0 • de

Ewing sarcomas are the second most common malignant primary bone tumors of childhood after osteosarcoma, typically arising from medullary cavity with invasion of the Haversian system. They usually present as moth-eaten destructive permeative lucent lesions in the shaft of long bones with large soft tissue component without osteoid matrix and typical onion skin periostitis. It may also involve flat bones and appears sclerotic in up to 30% of cases.

Presentation is non-specific with local pain being by far the most common symptom. Occasionally a soft tissue mass may be palpable. Pathological fractures also occur. Systemic symptoms including fever may be present. ESR is also elevated.

Ewing sarcoma is a small round blue cell tumor with regular sized primitive appearing cells. It is closely related to the soft tissue tumors pPNET, Askin tumor and neuroepithelioma, which collectively are referred to as Ewing sarcoma family of tumors (ESFT) . They share not only microscopic appearances but also demonstrate a non-random t(11;22)(q24;q12) chromosome rearrangement.

As far as location within long bones, the tumor is almost always metadiaphyseal or diaphyseal :

Ewing sarcomas tend to be large with poorly marginated tumors, with over 80% demonstrating extension into adjacent soft tissues. It should be noted that pPNET often extend into bone, making the distinction difficult.

The appearance of these tumors is very variable, but they usually have clearly aggressive appearance. Common findings include :

They occasionally demonstrate other appearances, including Codman triangles, spiculated (sunburst) or thick periosteal reaction and even bone expansion or cystic components.

Soft tissue calcification is uncommon, seen in less than 10% of cases .

Ewing sarcomas demonstrate increased uptake on both Gallium-citrate and all three phases of the Technetiumm methylene diphosphonate bone scans .

Systemic chemotherapy is the mainstay of treatment with surgery and/or radiotherapy playing a role depending on the location and size of the tumor.

What was once a uniformly fatal tumor now has respectable survival rates, although these vary with location. Spinal tumors for example have up to 86% long term survival compared to 25% of sacrococcygeal tumors . The overall 5 year survival is in the order of 50-75% of patients with local disease only at the time of presentation .

Prognosis is significantly impacted by the presence of distant metastases at the time of diagnosis, which is far more common for the pelvis (25-30%) compared to extremities (<10%) .

Metastases most frequently go to lungs and bones in equal proportions. The spine is the most commonly affected bone .

It is named after James Stephen Ewing (1866-1943), an American pathologist, who first described his eponymous tumor in 1920 .