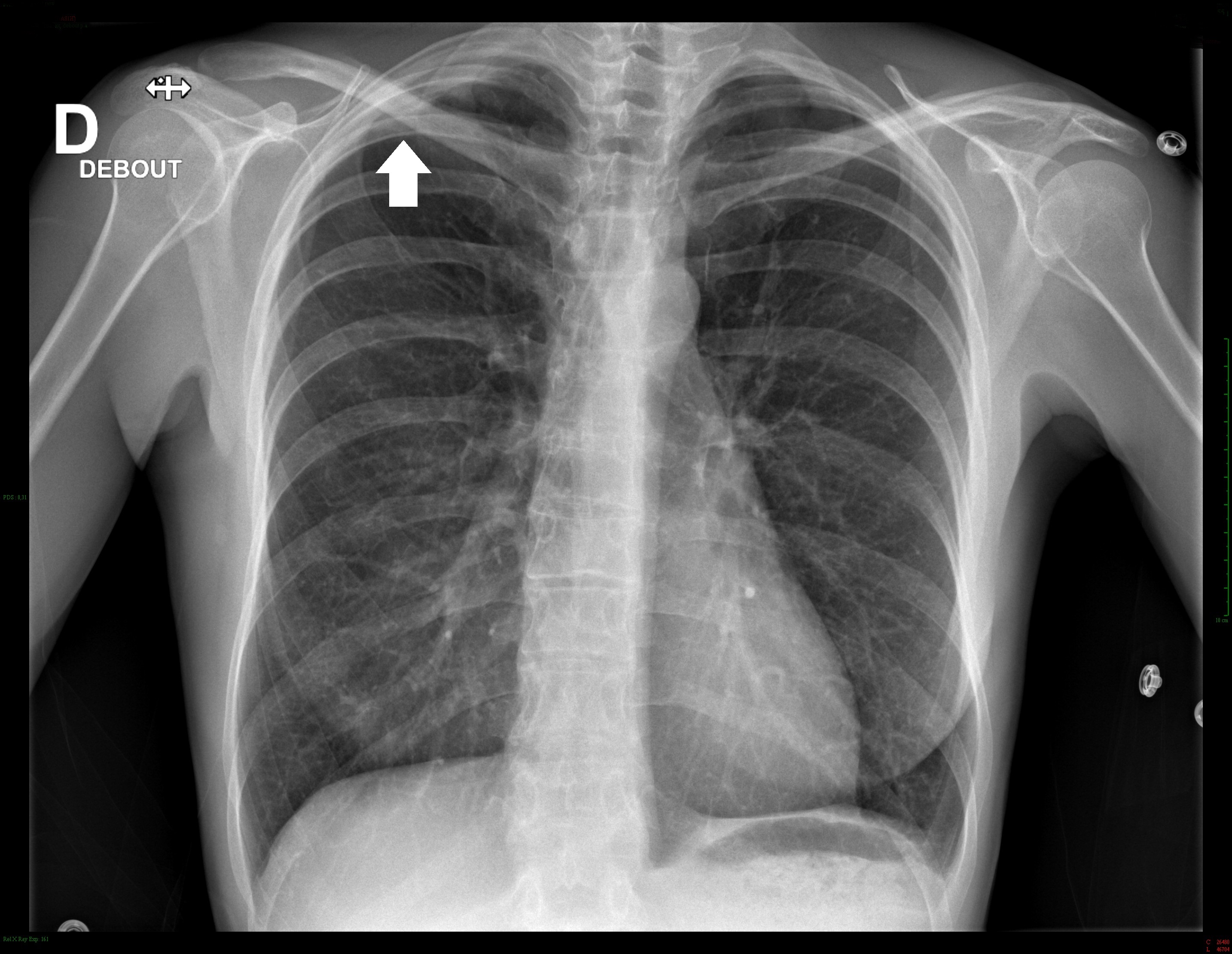 Pancoast tumor, also known as superior sulcus tumor, refers to a relatively uncommon situation where a primary lung cancer arises in the lung apex and invades the surrounding soft tissues. Classically a Pancoast syndrome results, but in actuality this is only seen in one quarter of cases.

The term superior pulmonary sulcus is now discouraged, both as a discrete anatomical entity and as a site for the origin of malignancy. It is an unhelpful term, not least because most formal anatomical texts do not even mention it as a structure. Moreover, there is no consistent usage in the literature as to what it actually refers to . Using the term "superior sulcus tumor" is imprecise and unneeded, as in all situations a 'lung apical tumor' would suffice as an alternative.  Notwithstanding the above, the term superior sulcus tumor is still seen in the radiological, medical and surgical literature. For the remainder of the article whenever Pancoast tumor or apical lung tumor is mentioned, the term superior sulcus tumor can be substituted, although we discourage its use.

Definitions vary from author to author, with some only referring to Pancoast tumors if the histology is a non-small cell lung cancer (NSCLC), and treating other apical tumors separately (even though any apical malignancy can cause Pancoast syndrome) ; and some only referring to Pancoast tumors if they have presented with Pancoast syndrome and call the rest apical tumors. Others use the term apical tumor and Pancoast tumor interchangeably, but limit the use to bronchogenic carcinomas, while others include all tumors that involve the thoracic apex (whether or not they arise from the lung).

For the sake of simplicity, we have taken the middle road. For this article pulmonary apex tumor and Pancoast tumor are used interchangeably to refer to a primary bronchogenic carcinoma with an apical pulmonary origin.

Although classically apical lung tumors present with Pancoast syndrome, this is only the case in approximately 25% of cases . The missing element is usually Horner syndrome.

The most common symptoms at presentation are chest and/or shoulder pain, with arm pain being also common. Weight loss is frequently present .

Apical lung tumors are usually non-small cell lung cancers (NSCLC). The most common histology encountered historically in this region were squamous cell carcinomas , however, more recently, and in keeping with the overall shift in frequency, bronchogenic adenocarcinomas are now more frequently identified .

Plain films demonstrate a soft tissue opacity at the apex of the lung. Occasionally rib involvement or extension into the supraclavicular fossa may be evident. Lordotic views may be helpful.

The role of ultrasound is limited, but it may be useful in aiding percutaneous biopsy as it can visualize the external component of the tumor via an intercostal or supraclavicular acoustic window .

Although, as is the case with bronchogenic cancer at other locations, CT is the workhorse for diagnosis, it has poor sensitivity (60%) and specificity (65%) for accurate local staging . It is, however, excellent at identifying bony involvement.

MRI is helpful in the assessment of pulmonary apical tumors due to its excellent demonstration of soft-tissue involvement and is far more sensitive (88%) and specific (100%) for local staging .

Careful assessment of the brachial plexus is important as the involvement of more than the lower trunk, or C8 nerve root, is usually considered inoperable .

The anatomy lends itself particularly to imaging in the coronal and sagittal plane, and the T1 sagittal images offer most of the required information .

As for bronchogenic carcinomas in general, it is useful for assessing nodal and distant metastases at the baseline staging. For Pancoast in particular, PET-CT permits an accurate delineation of the gross tumor volume, which will be essential for the radiation treatment planning .

Treatment depends crucially on the extent of involvement notably through the apex, as these lesions usually involve the brachial plexus and subclavian vessels. In such lesions, radiotherapy is typically administered in an attempt to downstage the tumor sufficiently to allow for attempted resection .

Much controversy nonetheless exists over exact inclusion and exclusion criteria for surgery and the timing and administration of radiotherapy and chemotherapy.

Despite advances in management, prognosis remains poor with an overall 5-year survival of only 36%. Complete resection is the most important factor in determining survival :

Pancoast syndrome as a result of superior sulcus tumors was described in some publications (Hare 1838 and Ciuffini in 1911) before Pancoast reported it using the term 'superior pulmonary sulcus tumor' in 1924 :

In addition a number of plain film mimics should be considered, including: