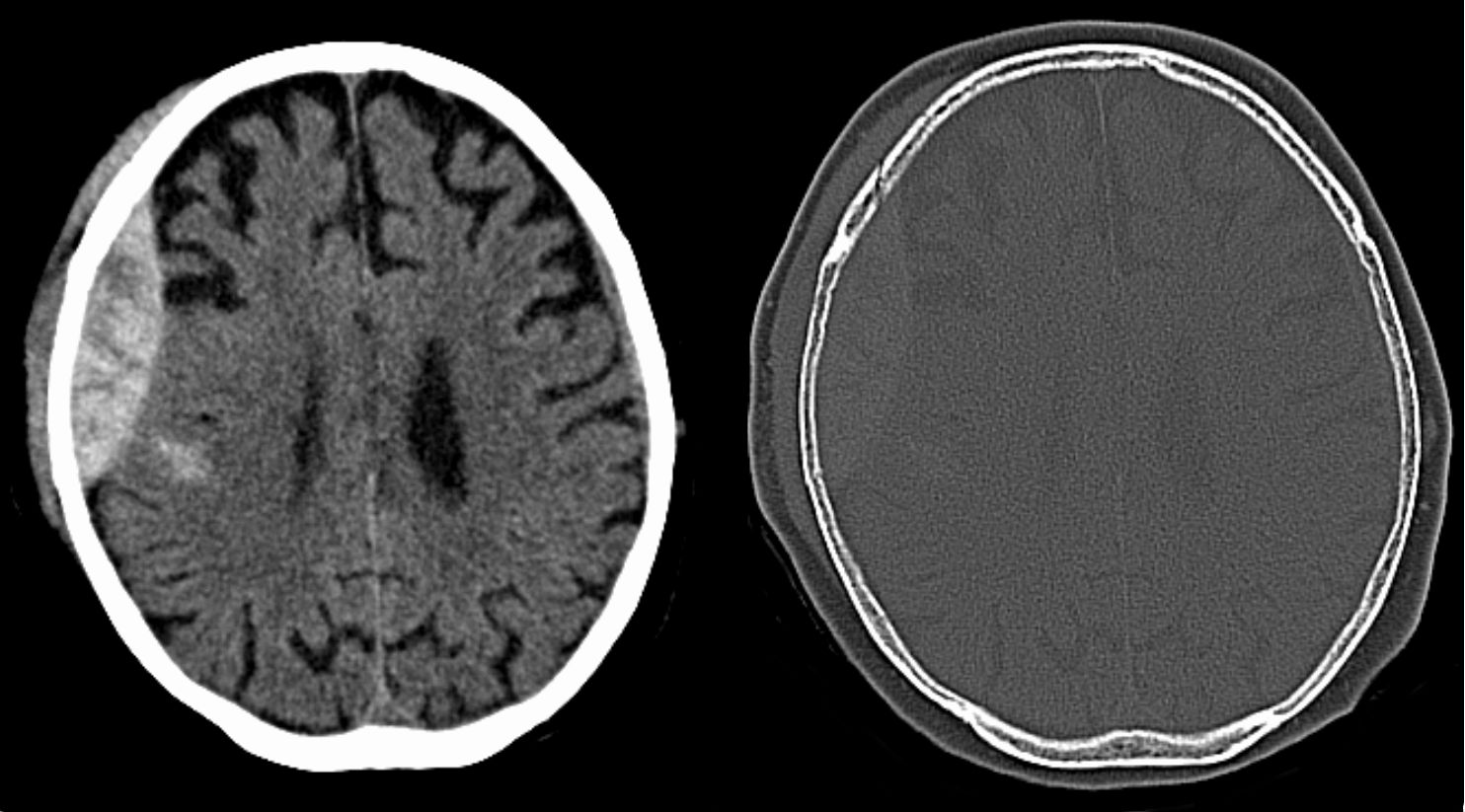 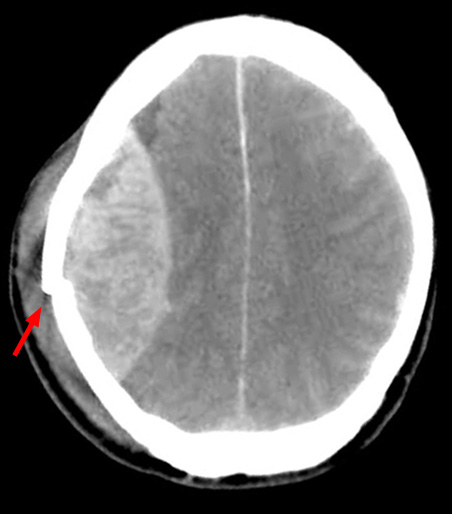 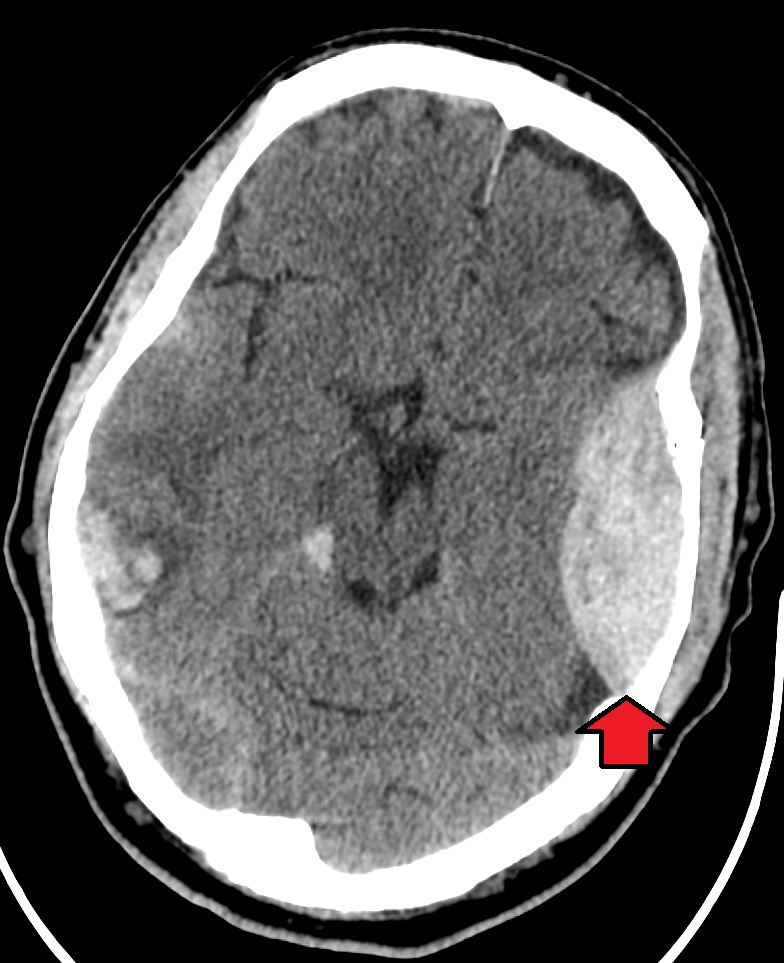 Epidural
hematoma on the persons left (images right) with an associated skull fracture. Also has some bleeding on the persons right.
Wikipedia • CC BY-SA 4.0 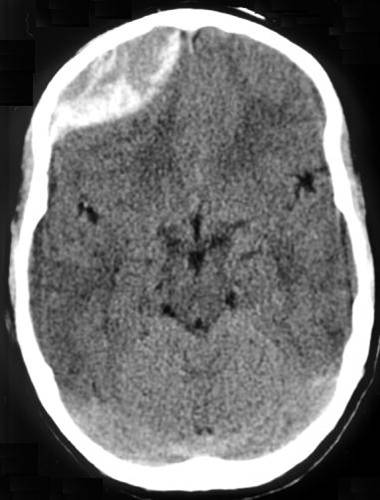 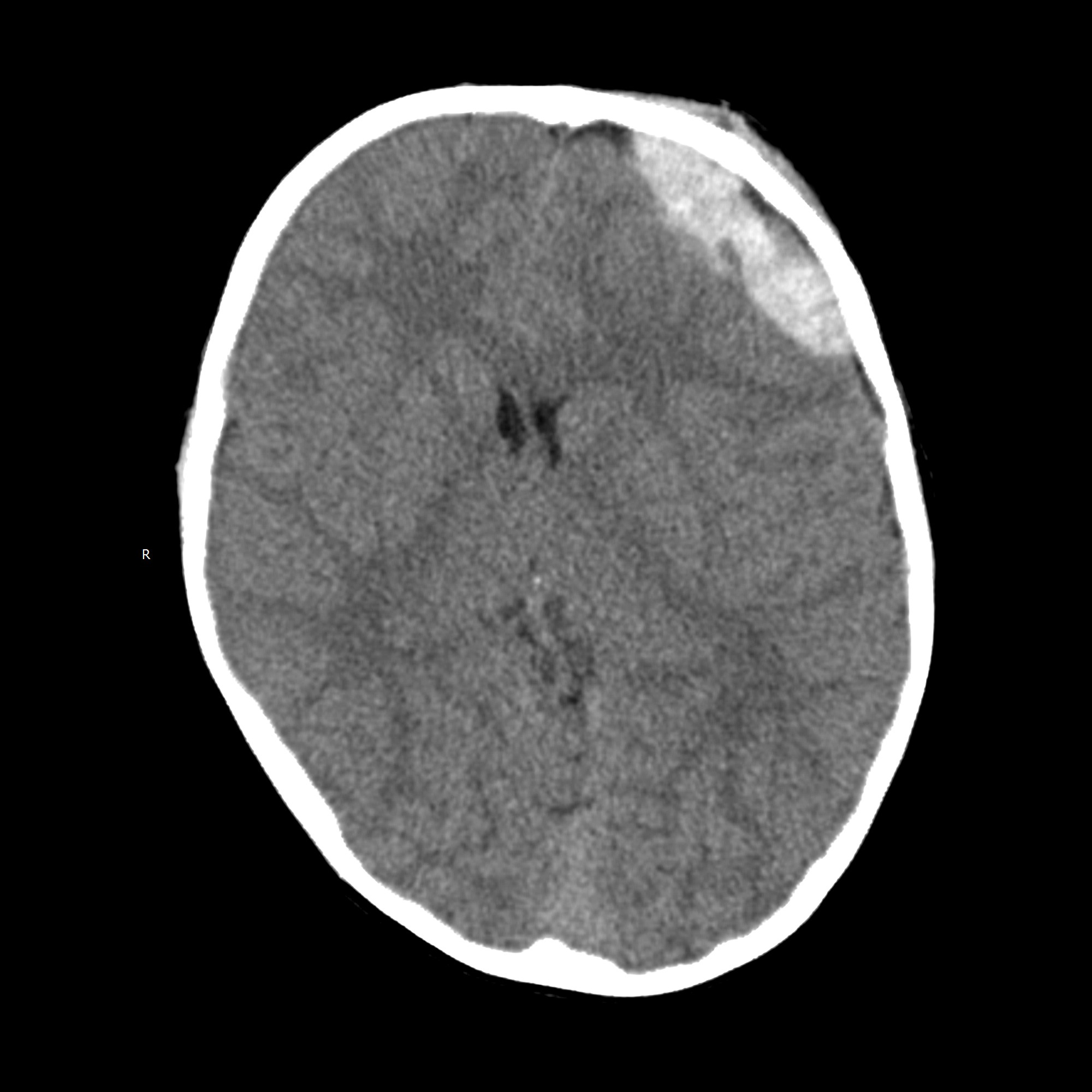 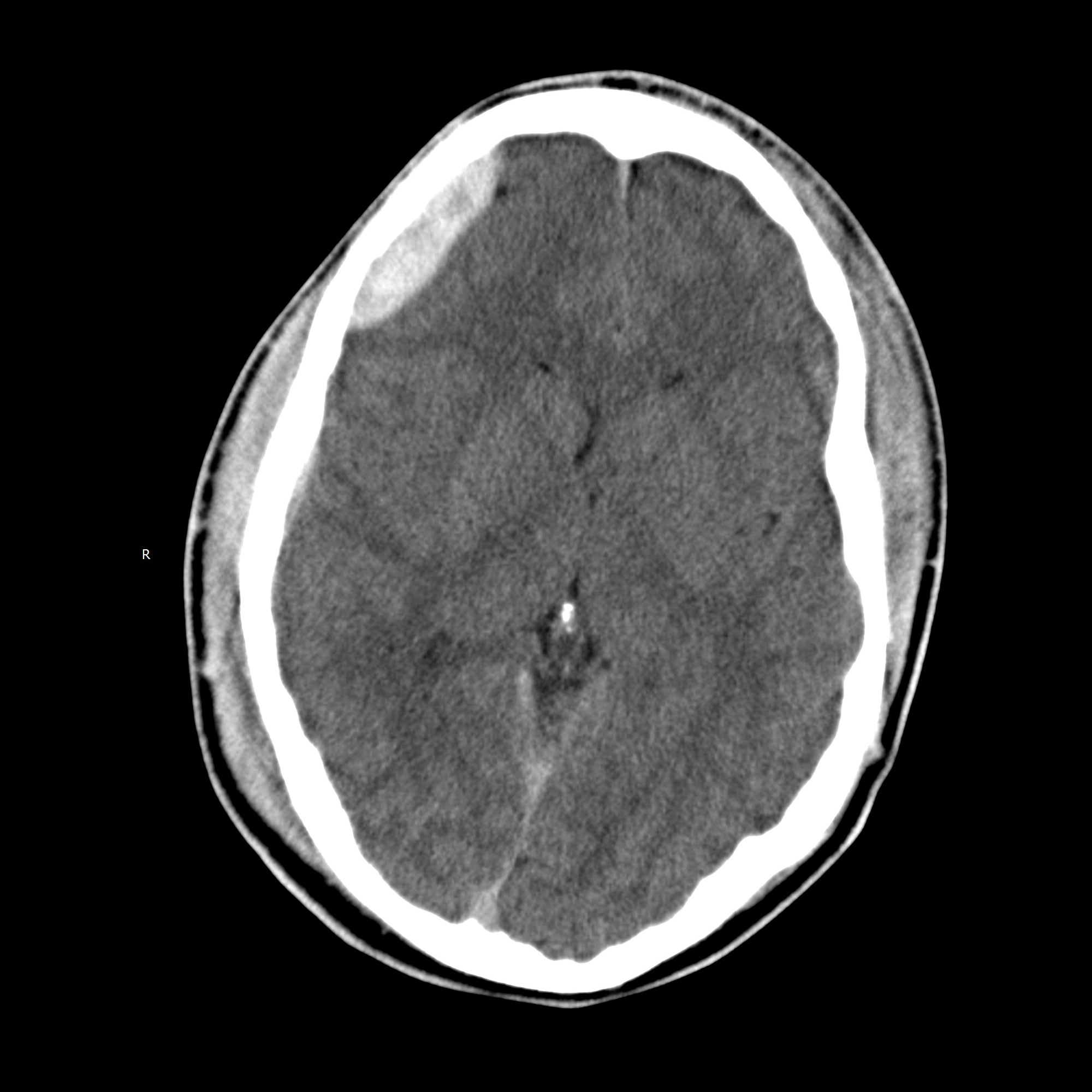 Teenager
ejected from the back of a pickup truck in a motor vehicle accidentAxial CT without contrast of the brain shows a right frontal high density biconvex intracranial extra-axial fluid collection.The diagnosis was epidural hematoma.
pediatricimaging.org • CC-by-nc-sa 4.0 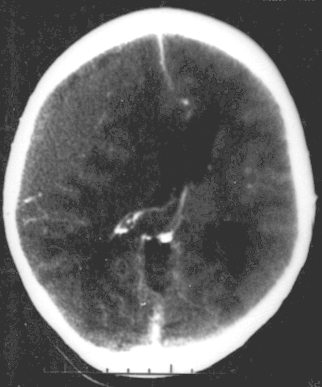 Epidural
hematoma as diagnosed in one of my patients. This image cannot be linked to the patient.
Wikipedia • CC-BY-SA-3.0
Hallo!
Radiopaedia • CC-by-nc-sa 3.0 • de

Extradural hematoma (EDH), also known as an epidural hematoma, is a collection of blood that forms between the inner surface of the skull and outer layer of the dura, which is called the endosteal layer. They are usually associated with a history of head trauma and frequently associated skull fracture. The source of bleeding is usually arterial, most commonly from a torn middle meningeal artery.

EDHs are typically biconvex in shape and can cause a mass effect with herniation. They are usually limited by cranial sutures, but not by venous sinuses. Both CT and MRI are suitable to evaluate EDHs. When the blood clot is evacuated promptly (or treated conservatively when small), the prognosis of EDHs is generally good.

Typically extradural hematomas are seen in young patients who have sustained head trauma, usually with an associated skull fracture.

A typical presentation is of a young patient involved in a head strike (either during sport or a result of a motor vehicle accident) who may or may not lose consciousness transiently. Following the injury, they regain a normal level of consciousness (lucid interval), but usually, have an ongoing and often severe headache. Over the next few hours, they gradually lose consciousness.

Due to the long cisternal course of the sixth cranial nerve (abducens nerve, CN VI), it is often involved as downward herniation begins, usually on the side of the hemorrhage and can, in an emergency, guide exploratory burr holes.

The source of bleeding is typically from a torn meningeal artery, usually the middle meningeal artery (75%). An associated skull fracture is present in ~75% of cases . Pain (often severe headache) is caused by the stripping of dura from the bone by the expanding hemorrhage. The posterior fossa is a rare location for traumatic injury, in general, including EDH .

Occasionally, an EDH can form due to venous blood, typically a torn sinus with an associated fracture: see venous extradural hemorrhage.

Young patients being affected is not only a result of the prevalent demographics of patients with a head injury but also relates to the changes that occur in the dura in older patients, as the dura is much more adherent to the inner surface of the skull.

It is important to realize that in the setting of sutural diastasis, extradural hematomas can cross sutures, as the continuation of the parietal (periosteal) component of the dura through the suture - which usually limits spread - is likely also to be disrupted.

EDHs are generally unilateral in more than 95% of cases, however, bilateral or multiple EDHs are reported.

Special locations to consider, particularly those related to venous extradural bleeding, include:

The morphology of extradural hematomas is best understood by reviewing their relationship to the bone and dura. An extradural hematoma is actually a subperiosteal hematoma located on the inside of the skull, between the inner table of the skull and parietal layer of the dura mater (which is the periosteum). As a result, EDHs are usually limited in their extent by the cranial sutures, as the periosteum crosses through the suture continuous with the outer periosteal layer. This is therefore helpful in distinguishing EDHs from subdural hematomas, which are not limited by sutures.

Extradural hemorrhages can, however, cross and elevate venous sinuses as long as there is no suture there; after all a venous sinus is located between the parietal and visceral layer of the dura.

Unfortunately, these rules are not foolproof and not infrequently extradural hematomas do cross sutures. One series found up to 11% of EDHs in children cross sutures . This occurs in many scenarios:

In almost all cases, extradural hematomas are seen on CT scans of the brain. They are typically bi-convex (or lentiform) in shape, and most frequently beneath the squamous part of the temporal bone. EDHs are hyperdense, somewhat heterogeneous, and sharply demarcated. Depending on their size, secondary features of mass effect (e.g. midline shift, subfalcine herniation, uncal herniation) may be present.

When acute bleeding is occurring at the time of CT scanning the non-clotted fresh blood is typically less hyperdense, and a swirl sign may be evident .

Postcontrast extravasation may be seen rarely in case of acute EDH and peripheral enhancement due to granulation and neovascularization can be seen in chronic EDH.

MRI can clearly demonstrate the displaced dura that appears as a hypointense line on T1 and T2 sequences which is helpful in distinguishing it from a subdural hematoma.

Intravenous contrast may demonstrate displaced or occluded venous sinus in case of the venous origin of EDH.

Prognosis, even with a relatively large hematoma, is in general quite good, as long as the clot is evacuated promptly. A smaller hematoma without mass effect or swirl sign can be treated conservatively , sometimes resulting in calcification of the dura.

Occasionally late complications are encountered, usually relating to the injured meningeal vessel. They include:

With large hematomas, there is rarely significant confusion as to the correct diagnosis. In smaller lesions, especially when there is associated parenchymal injury (e.g. cerebral contusions, traumatic subarachnoid blood, concurrent subdural hematoma) the diagnosis can be more challenging.