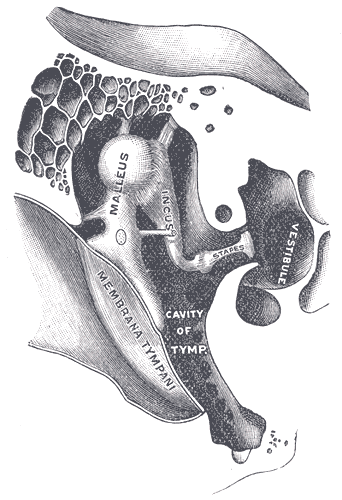 Chain of
ossicles and their ligaments, seen from the front in a vertical, transverse section of the tympanum. (Testut.)
Wikipedia • Public domain

This image
is part of a series which can be scrolled interactively with the mousewheel or mouse dragging. This is done by using Template:Imagestack. The series is found in the category Temporal bone in computertomography case 001. Felsenbein in der Computertomographie. Bilder für scrollbaren Stapel.
Wikipedia • CC BY 3.0 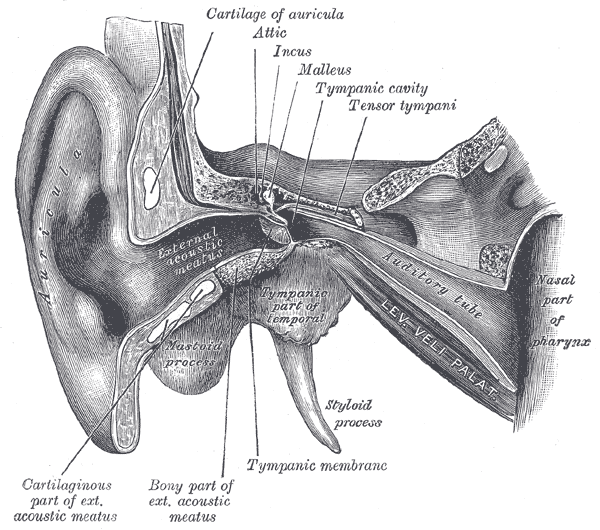 The middle ear or middle ear cavity, also known as tympanic cavity or tympanum (plural: tympanums/tympana), is an air-filled chamber in the petrous part of the temporal bone. It is separated from the external ear by the tympanic membrane, and from the inner ear by the medial wall of the tympanic cavity. It contains the three auditory ossicles whose purpose is to transmit and amplify sound vibrations from the tympanic membrane to the oval window of the lateral wall of the inner ear.

The tympanic cavity is subdivided into several parts defined in relation to the planes of the tympanic membrane. Some authors define three compartments :

The middle ear is shaped like a narrow box with concave sides. It has six "walls":

Middle ear ossicles consist of three small bones (the malleus, incus and stapes), which form a mobile chain across the tympanic cavity from the tympanic membrane to the oval window.

The chorda tympani , a branch of nervus intermedius, leaves the facial nerve in the facial canal and enters the tympanic cavity through the posterior wall, lateral to the pyramid, lying just underneath the mucous membrane. It runs over the pars flaccida of the tympanic membrane, and the neck of the malleus. It leaves at the anterior margin of the tympanic notch.

Specific reconstructions as Stenvers view or double-oblique sagittal view can be useful to assess the involvement of the facial canal in tumors affecting the tympanic cavity, as well as in pre-surgical assessment .

Lymphatic drainage is to the parotid, retropharyngeal and upper group of deep cervical nodes.

This is by the tympanic branch of the glossopharyngeal nerve (Jacobson nerve), which forms the tympanic plexus by combining with sympathetic fibers from the internal carotid nerve. Branches from the plexus supply sensory and vasomotor fibers to the mucous membrane of the tympanic cavity, as well as to the tympanic membrane and external auditory meatus.

The middle and external ear are also supplied by branches of the trigeminal, facial, glossopharyngeal and vagus nerves which results in referred pain in the ear from other areas supplied by these nerves, e.g. the teeth, posterior part of the tongue, pharynx and larynx.

The tympanic plexus gives off the lesser petrosal nerve, which provides parasympathetic innervation to the parotid gland via the otic ganglion.

Tympanum is derived from τύμπανον (tumpanon) the Ancient Greek word for a drum.