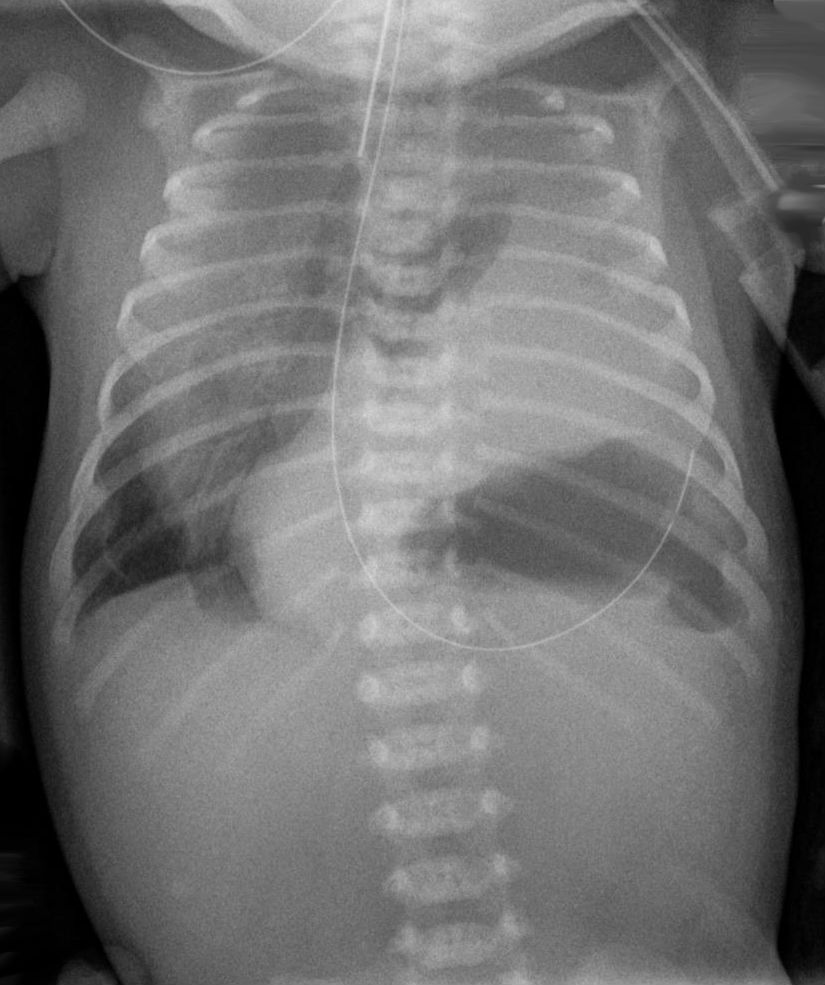 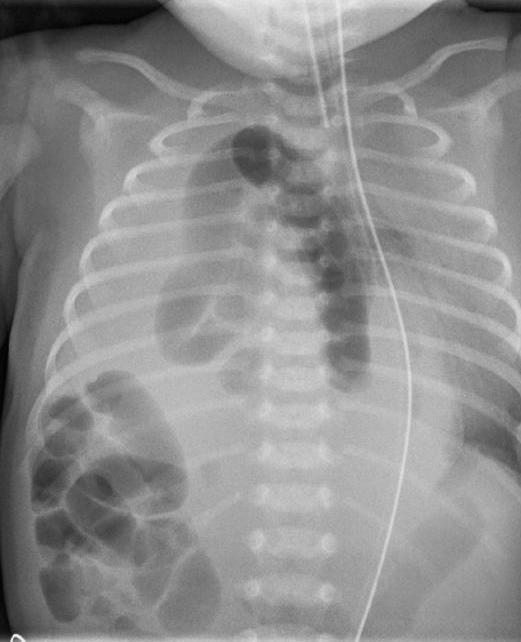 Upper
gastrointestinal series. May not be to scale.
Wikipedia • CC BY-SA 3.0

Most congenital diaphragmatic hernias are detected either soon after birth or on antenatal ultrasound. Mortality is predominantly due to the development of pulmonary hypoplasia, which is thought to be due to mass effect on the developing lung. Such neonates are hypoxic and have persistent fetal circulation due to pulmonary hypoplasia and pulmonary hypertension.

Diaphragmatic development is usually complete by ~9 week of gestation. Congenital diaphragmatic hernias result from failure of fusion of one of the pleuroperitoneal canals at about 8 weeks gestation. They may contain stomach, intestines, liver or spleen.

Congenital diaphragmatic herniation can be classified into two basic types on location:

While a CDH can occur as an isolated condition, associated anomalies are relatively common and include:

Indirect sonographic findings that should prompt a search for CDH include :

The study should be performed in the true transverse plane. Sonographic diagnosis of CDH can be made from the following findings :

The observed-to-expected lung-to-head ratio (O/E LHR) may be calculated and correlates with the degree of pulmonary hypoplasia. Studies suggest that the degree of lung hypoplasia can be used to predict survival rates and the numbers from the Antenatal-CDH-Registry group that apply to isolated left-sided CDH and liver herniation are shown below :

Fetal MRI may be helpful in further assessing the hernia and any associated pulmonary hypoplasia.

Sequences typically performed for assessment of CDH include :

Lung-head ratio: can be assessed on both ultrasound or MRI; MRI measured LHR has been found to have a slightly higher prognostic accuracy than with ultrasound .

MRI allows the measurement of fetal lung volumes which provide an estimate of the severity of pulmonary hypoplasia. The total fetal lung volume (TFLV) can be calculated from a contiguous T2-weighted HASTE sequence and an observed-to-expected TFLV (O/E TFLV) derived. It has been found to predict well both mortality and morbidity, including the need for ECMO and the development of bronchopulmonary dysplasia .

Fetuses with an antenatal diagnosis of CDH should be delivered in a tertiary referral center with access to neonatal intensive care and pediatric surgical facilities.

Large CDH have a poor prognosis, due to pulmonary hypoplasia and perinatal mortality may be as high as 80%. Clearly, successful management is dependent on specialist pediatric facilities, with the ability to offer surgery, ECMO etc...

Signs suggesting a poor prognosis include:

A composite prognostic index (CDH-CPI) comprising 10 prenatal parameters has been developed and was found to have a stronger correlation with survival and need for ECMO than any one parameter individually .

Some centers perform in utero surgery in selected cases, including novel methods such as clamping the fetal trachea to allow expansion of the fetal lungs with fluid and consequently push the herniation back into the abdomen.