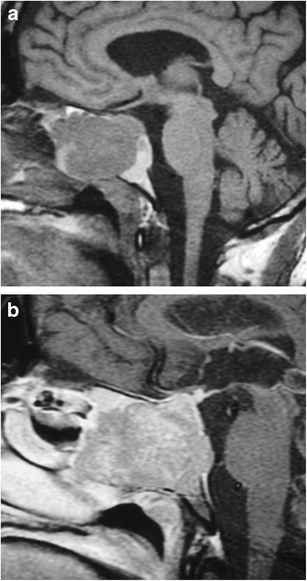 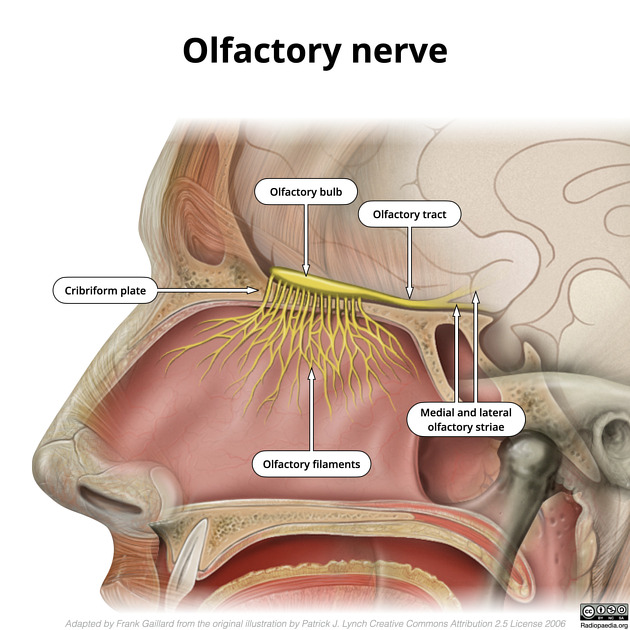 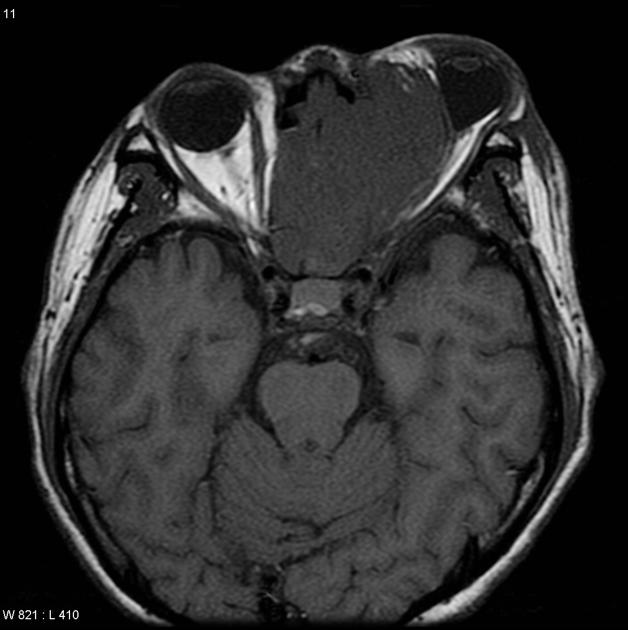 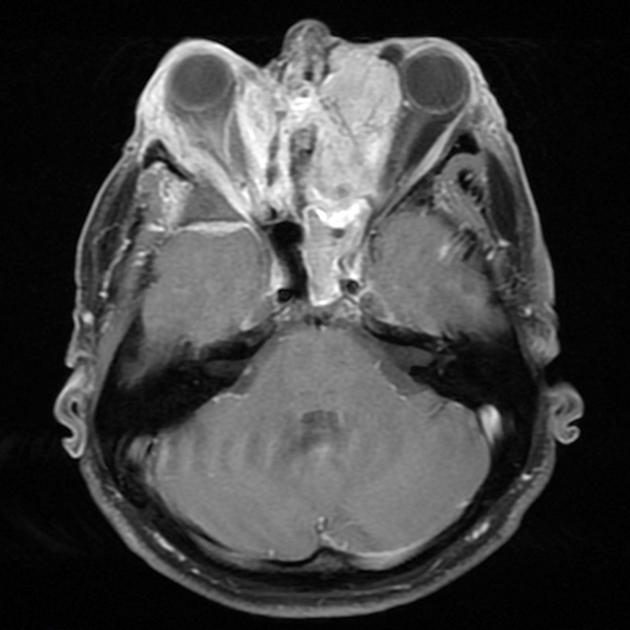 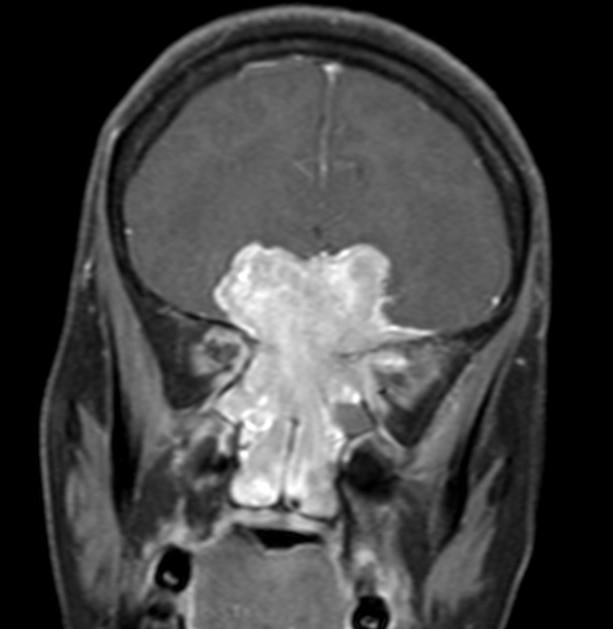 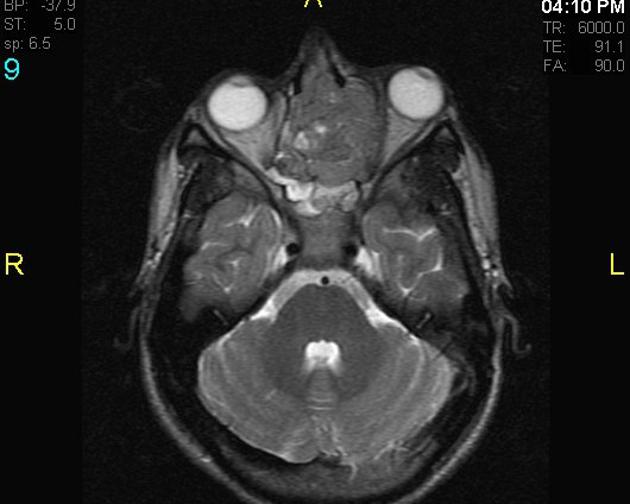 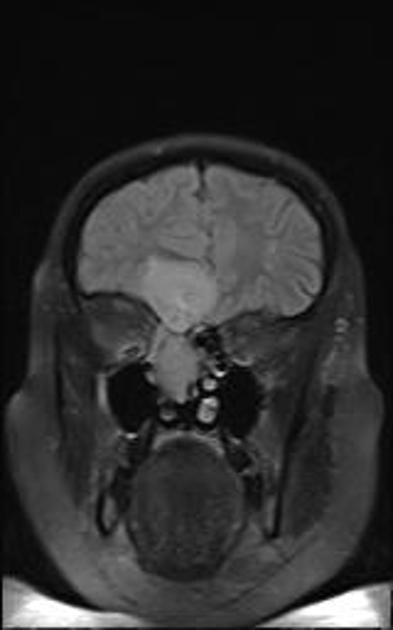 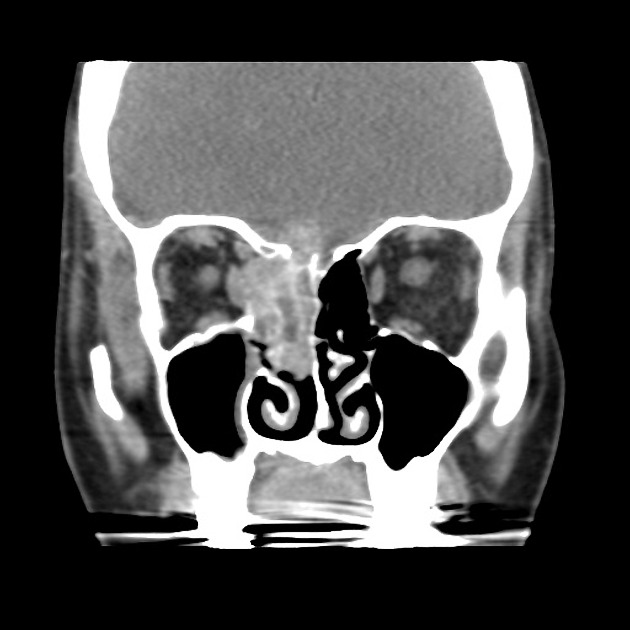 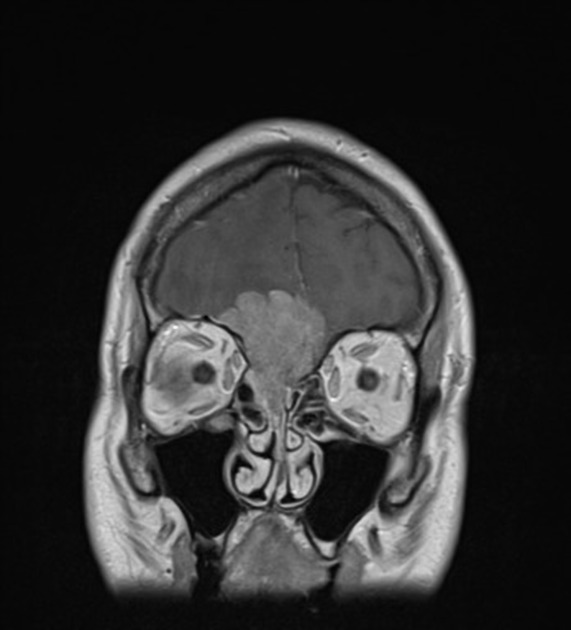 They usually present as a soft tissue mass in the superior olfactory recess involving the anterior and middle ethmoid air-cells on one side and extending through the cribriform plate into the anterior cranial fossa. Contrast enhancement is often marked in both CT and MRI studies.

There is bimodal age distribution with one peak in young adult patients (~2 decade) and another peak in the 5 to 6 decades. There is no recognized gender predilection.

Clinical presentation is usually secondary to nasal stuffiness and rhinorrhea or epistaxis. Presentation is often delayed and symptoms may have been present for many months. Patients often present late with larger tumors which can extend into the intracranial compartment (25-30% at diagnosis) and usually result in anosmia .

Histology demonstrates variable differentiation, from well-formed neural tissue to undifferentiated neuroblasts with pseudorosette formation . It has been suggested that olfactory neuroblastoma is actually part of the Ewing sarcoma group of tumors, rather than being related to neuroblastoma .

The tumors are slow-growing and the choice of imaging will depend on the tumor's size. They begin as masses in the superior olfactory recess and initially involve the anterior and middle ethmoid air-cells unilaterally . As they grow, they tend to destroy surrounding bone and can extend in any direction. Often they are said to form a "dumbbell-shaped" mass with a "waist" as it passes through the cribriform plate .

This invasion may be superiorly into the anterior cranial fossa, laterally into the orbits and across the midline into the contralateral nasal cavity. They can also obstruct the ostia of paranasal sinuses, resulting in opacification of the sinus with secretions .

Particular attention should be paid to the presence of cervical and retropharyngeal nodal metastases, which are present in 10-44% of cases at diagnosis .

CT is particularly useful in assessing bony destruction, although it cannot distinguish olfactory neuroblastomas from other tumors that arise in the same region . The mass is of soft tissue attenuation, with relatively homogeneous enhancement . Focal calcifications are occasionally present .

These tumors are relatively slow-growing and thus, bony margins are often remodeled and resorbed, rather than being aggressively destroyed .

When an intracranial extension is present, peritumoural cysts between it and the overlying brain are often present. This may be helpful in distinguishing it from other entities (see below) . The margins of these cysts sometimes enhance .

As with other neuroblastomas, olfactory neuroblastomas are MIBG-avid. This potentially helps to differentiate them from other tumors that arise in region .

Unfortunately, imaging alone often struggles to distinguish between olfactory neuroblastomas and other aggressive malignancies in the region. The differential includes :