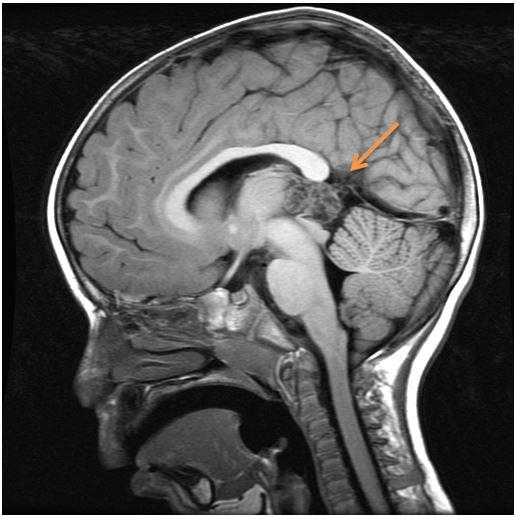 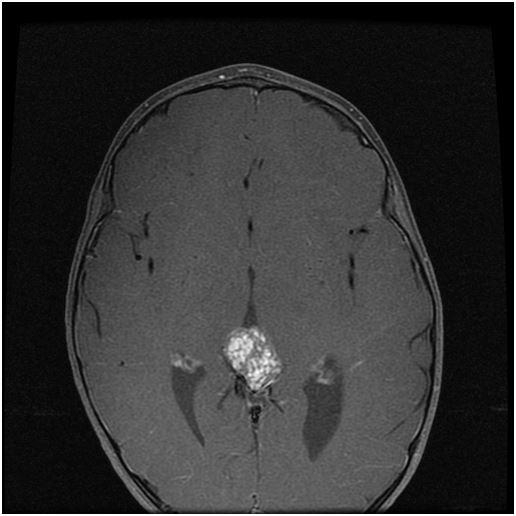 Pineoblastomas are tumors that are best thought of small round blue cell tumors located in the pineal region and thus, they closely resemble (both on imaging and on histology) medulloblastomas and retinoblastomas. They are the most aggressive and highest grade tumor among pineal parenchymal tumors, and considered WHO grade IV tumors.

On imaging, they usually present as large lobulated and enhancing tumors (more than 3 cm), hyperattenuating on CT (highly cellular), with heterogeneous signal intensities on MRI, sometimes with evident necrotic and hemorrhage regions. Restricted diffusion is commonly evident and, in almost all cases, obstructive hydrocephalus is observed at the presentation.

Pineoblastomas are the most aggressive pineal parenchymal tumor and account for a substantial proportion of such tumors (24-50%) . They are typically found in young children, with only a slight female predilection (M:F 0.7:1; similar to other pineal parenchymal tumors), which is in contrast to the male predominance seen in pineal germinomas) .

Patients with DICER1 syndrome have an increased risk for developing pineoblastomas.

Pineoblastomas are typically large and almost always associated with obstructive hydrocephalus, due to compression of the cerebral aqueduct. Compression of the tectal plate may also result in the Parinaud syndrome.

They are highly malignant tumors prone to CSF seeding, which is present in 15% of patients at the time of diagnosis.

Pineoblastomas originate from pinealocytes and/or their precursors . They are the least differentiated pineal cell tumors, with pineocytomas and pineal parenchymal tumor with intermediate differentiation representing better-differentiated tumors along the same spectrum. Pineoblastomas are considered WHO grade IV tumors .

These tumors are poorly defined, often invading adjacent brain parenchyma. Their cut surface is pink and soft, with areas of necrosis and hemorrhage not infrequently seen .

Pineoblastomas are composed of tightly packed small round blue cells (high nuclear to cytoplasmic ratio) which in turn determines their imaging appearances (see below) . The growth pattern is largely featureless with the pineocytomatous rossettes seen in pineocytomas not present . In contrast, Homer Wright rosettes and Flexner-Wintersteiner rosettes are occasionally seen .

Immunophenotype is similar to other pineal parenchymal tumors .

Pineoblastomas tend to be large poorly defined masses, with frequent CSF seeding at presentation. They have a tendency to involve directly adjacent brain structures, which helps distinguish them from other pineal tumors that tend to be better circumscribed.

The solid component tends to be slightly hyperdense compared to the adjacent brain due to high cellularity. This is a characteristic shared by other small round blue cell tumors such as PNET and medulloblastoma.

Classically, they are described as having peripherally dispersed or "exploded" calcification (mnemonic: blasted calcification), similar to pineocytomas. In contrast, pineal germinomas tend to engulf pineal calcification.

Central necrosis is sometimes present which can make the mass appear centrally cystic and thus can roughly mimic a pineal cyst, although the latter should have a smooth, thin wall .

Screening of the whole neural axis is necessary as CSF seeding is seen in 45% of cases .

Treatment is usually a combination of surgery, chemotherapy and radiation . Despite treatment, the prognosis has historically been poor, with a 5-year survival as low as 10%. More recently 5-year survival of 58-81% have been reported with median overall survival times of 4-8 years.

The most important factors predicting a favorable outcome are early detection and treatment with at least chemotherapy, preferably a high dose regime with stem cell rescue .