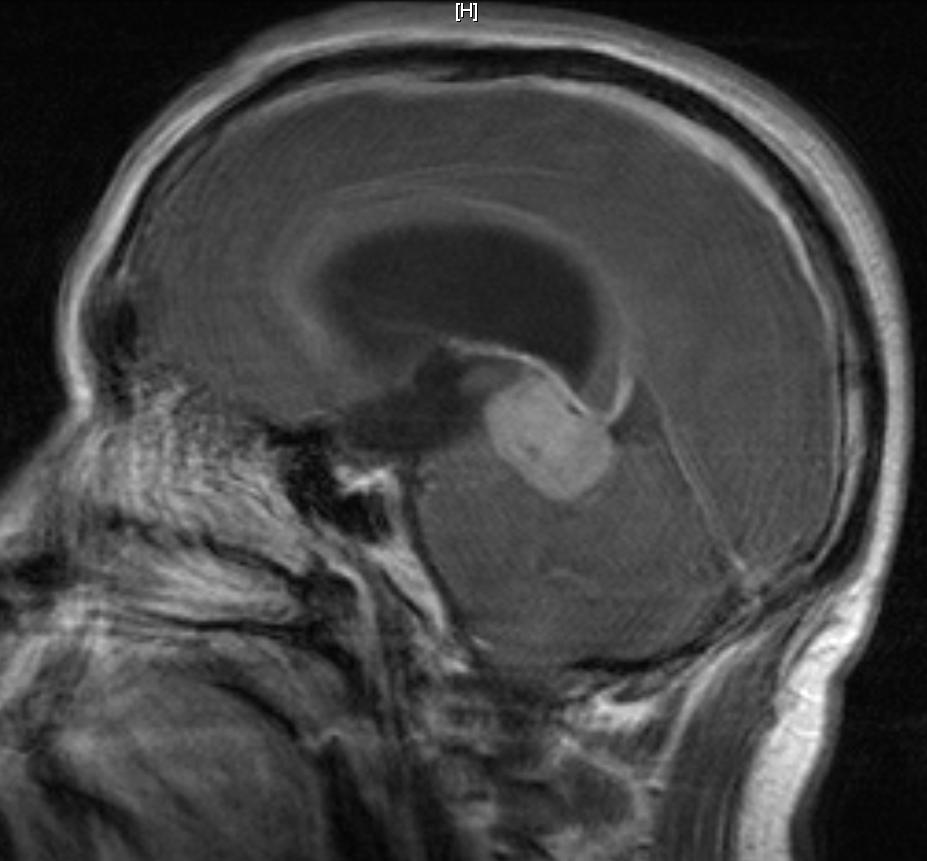 Intracranial germinomas, also known as dysgerminomas or extra-gonadal seminomas, are a type of germ cell tumor and are predominantly seen in pediatric populations. They tend to occur in the midline, either at the pineal region (majority) or along the floor of the third ventricle/suprasellar region.

They are the most common tumor of the pineal region accounting for approximately 50% of all tumors, and the majority (73-86%)  of intracranial germ cell tumor.

Presentation depends on location, with compression of the tectal plate leading to obstructive hydrocephalus and Parinaud syndrome, whereas involvement of the pituitary infundibulum leads to diabetes insipidus (most common), hypopituitarism (common), optic chiasm compression or signs of intracranial hypertension . When the thalami and basal ganglia are involved, the presentation is often delayed with a larger tumor at diagnosis.

Germinomas derive from germ-cells and typically arises in the midline, relating to the third ventricle :

Germinomas are soft tissue density, enhancing masses. When present in the pineal region they appear to "engulf" the normal pineal tissue and can have associated central calcification, in contrast to pineocytomas, and pineoblastomas which are described as "exploding" the foci of calcification. Cystic components are commonly found in up to 45% of cases.

On CT, the high cellularity of these tumors results in hyperdensity compared to adjacent brain. Usually, the mass enhances brightly.

When in the floor of the third ventricle it is typically seen filling and expanding the infundibular recess and supraoptic recess. Imaging may, however, be normal initially and if the diagnosis is suspected clinically (e.g. idiopathic hypothalamic diabetes insipidus) then a close follow-up is required to identify potentially very subtle abnormal pituitary stalk enhancement and thickening.

In the pediatric population presence of calcification in the pineal region is a useful marker of an underlying tumor, as no calcification of the pineal is seen in children below the age of 6.5 and only ~10% of children between 11 and 14 years of age.

The mainstay of treatment is with radiotherapy which offers ~85% (range 79-90%) long-term cure rate . Leptomeningeal seeding or spillage during surgery are thought to be poor prognostic factors. Imaging of the entire neuraxis is therefore recommended before irradiation.

Overall the prognosis is good, with over 90% 5-year survival with chemotherapy and radiotherapy.

The differential can depend on location: