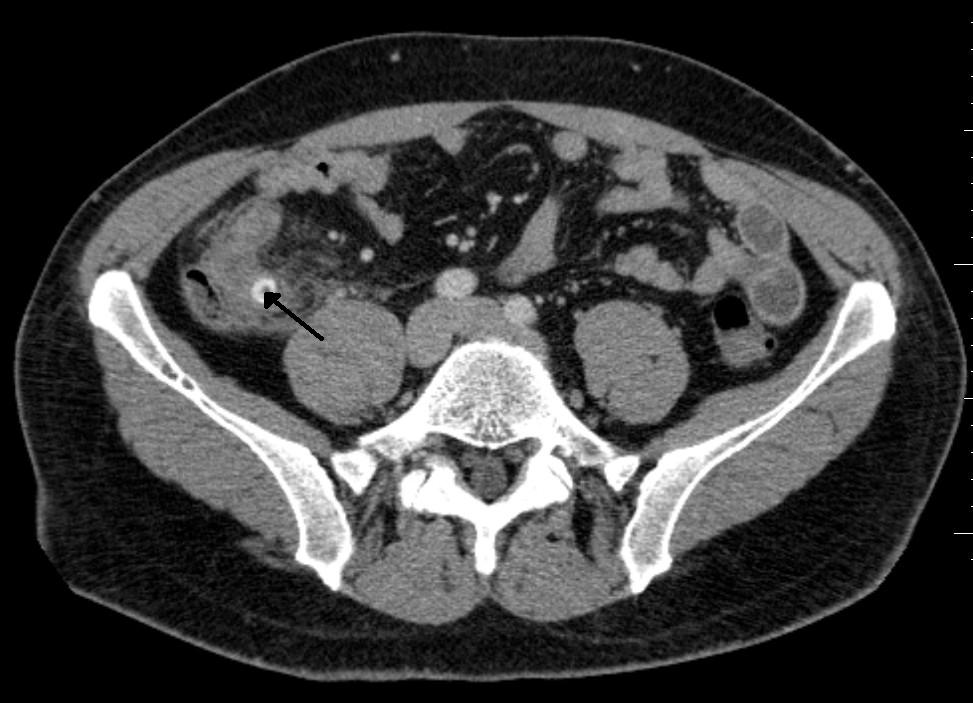 A fecalith
which has resulted in acute appendicitis.
Wikipedia • CC BY-SA 3.0

Appendicitis is inflammation of the vermiform appendix. It is a very common condition in general radiology practice and is one of the main reasons for abdominal surgery in young patients. CT is the most sensitive modality to detect appendicitis.

Acute appendicitis is typically a disease of children and young adults with a peak incidence in the 2to 3 decades of life .

The classical presentation consists of periumbilical pain (referred) which within a day or later localizes to McBurney point with associated fever, nausea, and vomiting . This progression is only seen in a minority of cases and is unhelpful in children who often present with vague and non-specific signs and symptoms. It also relies on the appendix being in a 'normal' position, which is not the case in a significant number of cases (see below).

General signs and symptoms include :

The Alvarado score is a clinical score that can be useful to risk-stratify patients. In children clinicians sometimes use other scores such as a PAS or pARC score for the same purpose.

Appendicitis is typically caused by obstruction of the appendiceal lumen, with the resultant build-up of fluid, suppurative inflammation, secondary infection, venous congestion, ischemia, and necrosis. Obstruction may be caused by :

One of the biggest challenges of imaging the appendix is finding it. Once confidently identified, assessing its normality is relatively straightforward.

Fecal loading of the cecum is associated with acute appendicitis, which is uncommon in other acute inflammatory diseases of the right side of the abdomen.

The location of the base of the appendix is relatively constant, located roughly between the ileocecal valve and the apex of the cecum. This relationship is maintained even when the cecum is mobile.

The location of the tip of the appendix is much more variable, especially as the length of the appendix has an extensive range (2-20 cm). The distribution of positions is described as :

Plain radiography is infrequently able to give the diagnosis, however, is useful for identifying free gas, and may show an appendicolith in 7-15% of cases . In the right clinical setting, finding an appendicolith makes the probability of acute appendicitis up to 90%.

If an inflammatory phlegmon is present, displacement of cecal gas with mural thickening may be evident.

Small bowel obstruction pattern with small bowel dilatation and air-fluid levels is present in ~40% of perforations.

Ultrasound with its lack of ionizing radiation should be the investigation of choice in young patients. With a competent user, ultrasonography is reliable at identifying abnormal appendices, especially in thin patients. However, the identification of a normal appendix is more problematic, and in many instances, appendicitis cannot be ruled out.

The technique used is known as graded compression, using the linear probe over the site of maximal tenderness, with gradual increasing pressure exerted to displace normal overlying bowel gas.

Findings supportive of the diagnosis of appendicitis include :

Confirming that the structure visualized in the appendix is clearly essential and requires demonstration of it being blind-ending and arising from the base of the cecum. Identifying the terminal ileum confidently is also helpful.

CT is highly sensitive (94-98%) and specific (up to 97%) for the diagnosis of acute appendicitis and allows for alternative causes of abdominal pain also to be diagnosed. The need for contrast (IV, oral, or both) is debatable and varies from institution to institution. Oral contrast has not been shown to increase the sensitivity of CT .

Less specific signs may be associated with appendicitis:

MRI is recommended as the second-line modality for suspected acute appendicitis in pregnancy patients, where available . Protocols vary widely, but most include imaging in three planes with a rapidly acquired sequence with T2 weighting, and some include T2 fat-suppressed imaging. MRI findings mirror those of other modalities, with luminal distension and widening, wall thickening, and periappendiceal free fluid.

Treatment is appendectomy, which can be performed either open or laparoscopically . Mortality from simple appendicitis is approximately 0.1% but is as high as 5% in perforation with generalized peritonitis .

In ~30% of cases where the appendix has become gangrenous and perforated, initial nonoperative management is preferred provided the patient is stable. It is in this situation that radiologists have a therapeutic role to play with percutaneous CT- or US-guided drainages of periappendiceal abscess.

Clinically, the most common differential is that of mesenteric adenitis, which can be differentiated by the identification of a normal appendix and enlarged mesenteric lymph nodes.