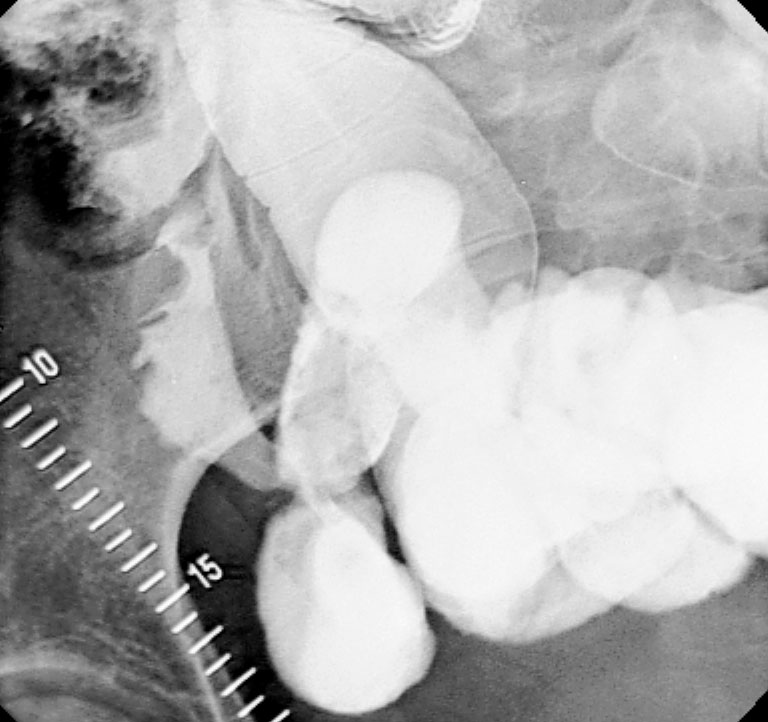 Teenager with
poorly controlled inflammatory bowel disease. Axial CT with contrast of the abdomen shows a thick-walled mass that is filled with air and oral contrast that is located medial to the oral contrast-filled thickened ascending colon and above the right psoas muscle. An extensive amount of inflammatory change is seen in the mesenteric fat in the right lower quadrant.The diagnosis was Crohn’s disease with a fistula to an abscess above the right psoas muscle.
pediatricimaging.org • CC-by-nc-sa 4.0
Hallo!
Radiopaedia • CC-by-nc-sa 3.0 • de

The diagnosis is typically made between the ages of 15 and 25 years with no gender predilection . There is a familial component and incidence varies geographically.

Patients typically present with chronic diarrhea and recurrent abdominal pain, although occasionally the presentation is with a complication or an extraintestinal manifestation. Anemia may be present and C-reactive protein may be elevated .

Fecal calprotectin has been increasingly used in recent years to:

Crohn disease remains idiopathic, although infective agents have been gaining in popularity as a possible cause, including the measles virus and atypical mycobacterium. As there are definite genetic factors at play, multiple factors are likely to contribute . Incidence is higher in people with first degree relatives having IBD, reaching up to 10%. Also, there has been shown 30-50% chance of developing the disease in mono- or heterozygous twins.

Initially, the disease is limited to the mucosa with neutrophilic cryptitis and lymphoid hyperplasia, lymphedema and shallow aphthoid ulceration. As the disease progresses, the entire bowel wall becomes involved, with linear longitudinal and circumferential ulcers extending deep into the bowel wall, predisposing to fistulae. Inflammation also extends into the mesentery and over time leads to chronic fibrotic change, and stricture formation .

The characteristic of Crohn disease is the presence of skip lesions and discrete ulcers. The frequency with which various parts of the gastrointestinal tract are affected varies widely :

The choice of investigation modality depends on local expertise and availability. CT and MR enterography are similar in sensitivity for active inflammation (89% vs 83% respectively) and both are better than small bowel follow-through (67-72%) . The lack of ionizing radiation from MRI would make it a better option, however, the availability of MRI is limited in many countries.

Ultrasound, which has been largely applied by gastroenterologists, is also an option for diagnosing active disease, following-up treatment response, and assessing complications . Reported sensitivity of 75-94% and specificity 67-100% .

Ultrasound has a limited role, but due to it being cheap, available, and not involving ionizing radiation, it has been evaluated as an initial screening tool for active disease and also for follow-up and to assess complications . Features which may be discovered during transabdominal sonography include :

CT is commonly the first imaging assessment of those patients in the setting of acute abdomen, or it can be also applied to the reassessment of complications in patients with known Crohn disease. Common features include:

CT is also able to give valuable information on:

CT enterography is superior to standard CT studies when assessing for small bowel Crohn disease and is equivalent to MR enterography, the downside compared to the latter being ionizing radiation. CT enteroclysis may be attempted in select patients. For the imaging findings and descriptors in CT enterography, see the discussion below under MR enterography.

MR enterography has become an increasingly important part of the management of patients with Crohn disease. MR enteroclysis may be attempted in select patients.

Features of small bowel Crohn disease to be assessed on dedicated MRI study include:

Mesenteric signs of inflammation include:

Features of penetrating disease include:

Management is complex as the condition is chronic with a relapsing-remitting course. Medical management includes corticosteroids, 5-ASA preparations, immunomodulation (e.g. azathioprine, cyclosporine, methotrexate) . Surgical management is reserved for complications including:

It is named after Burrill Bernard Crohn (1884-1983), an American gastroenterologist, who described the condition as 'regional ileitis' in his seminal 1932 paper . However, the first definite description (but see below) was nearly twenty years prior, by Sir T (Thomas) Kennedy Dalziel (1861-1924), a Scottish surgeon, in 1913 .

Antoni Leśniowski (1867-1940), a Polish surgeon, described a small bowel condition in 1904 in a small series of four patients, with similarities to Crohn disease, although it remains controversial if it was actually Crohn's . At least one of the patients probably actually had ileal tuberculosis. Nevertheless, Polish physicians and journals usually call the condition Lesniowski-Crohn disease.

The differential diagnosis depends on the presenting symptom. When terminal ileitis is the main presentation, then differentials (adjusted for patient's age) include :

When colonic involvement is the predominant feature then other considerations include: