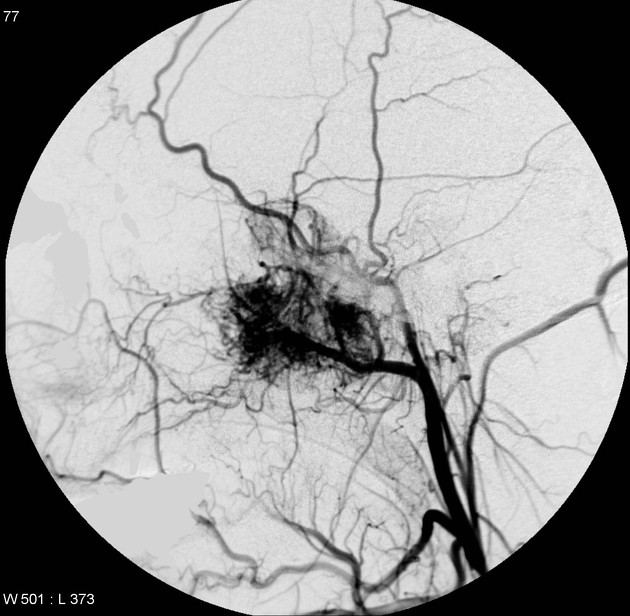 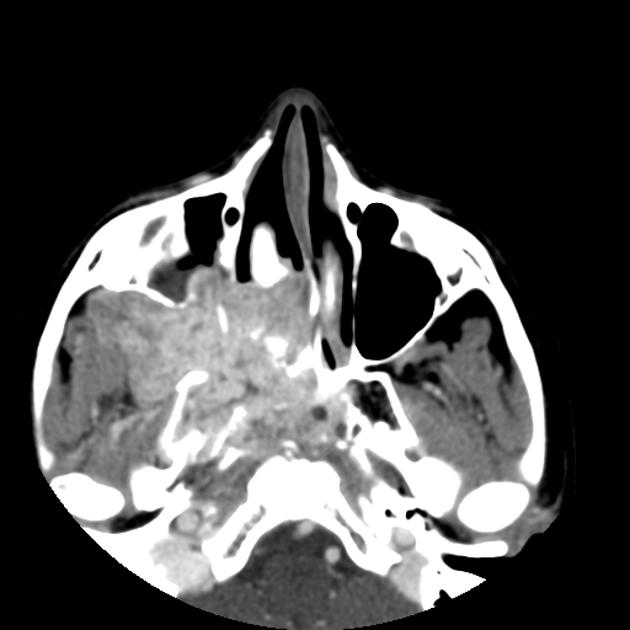 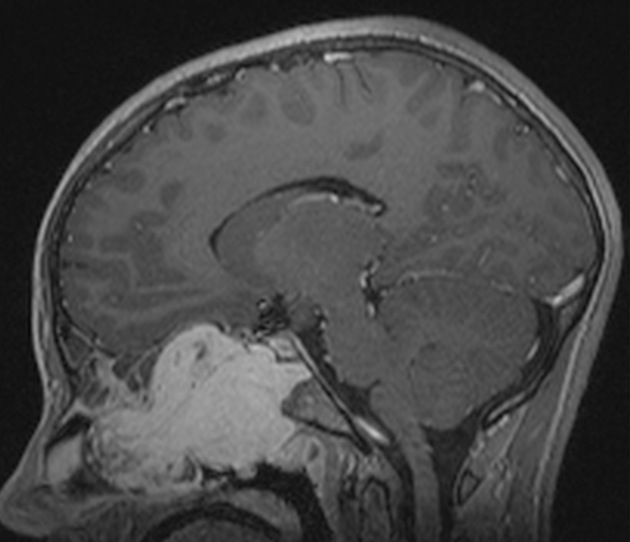 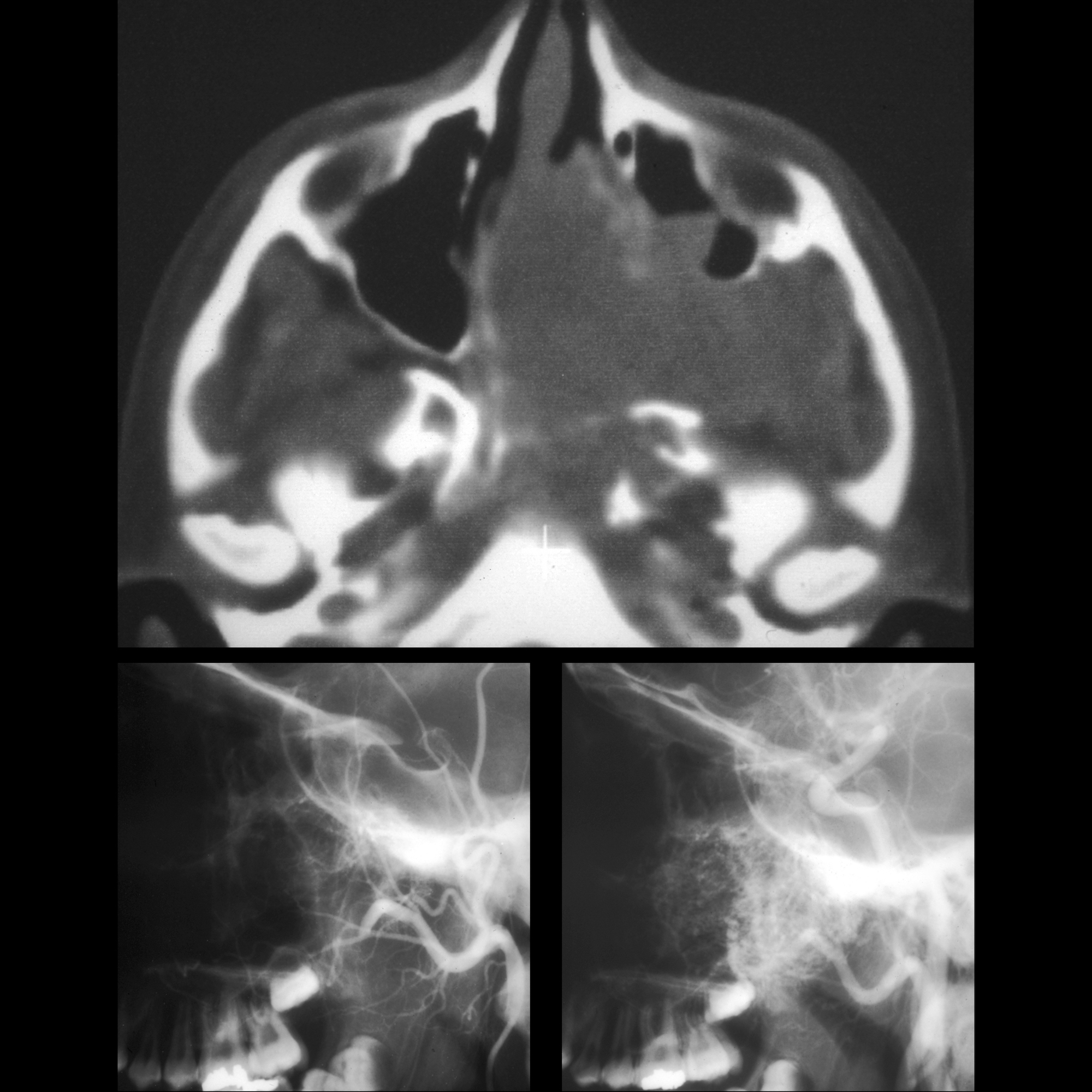 Teenager with
epistaxisAxial CT without contrast of the face (above) shows a large left sided sinonasal soft tissue mass. Early (below left) and later (below right) lateral images from a carotid angiogram show the mass to be hypervascular.The diagnosis was juvenile nasopharyngeal angiofibroma.
pediatricimaging.org • CC-by-nc-sa 4.0 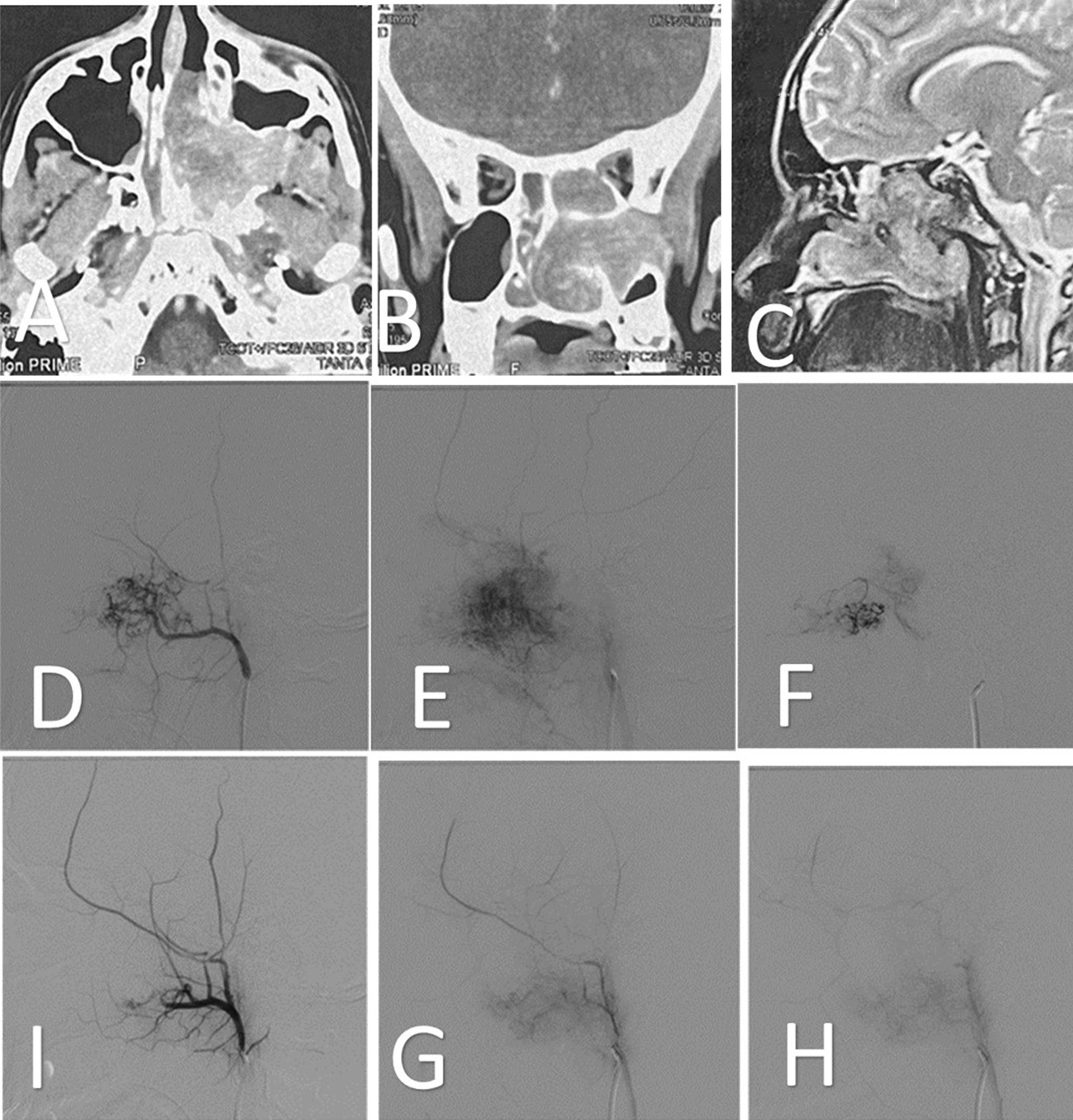 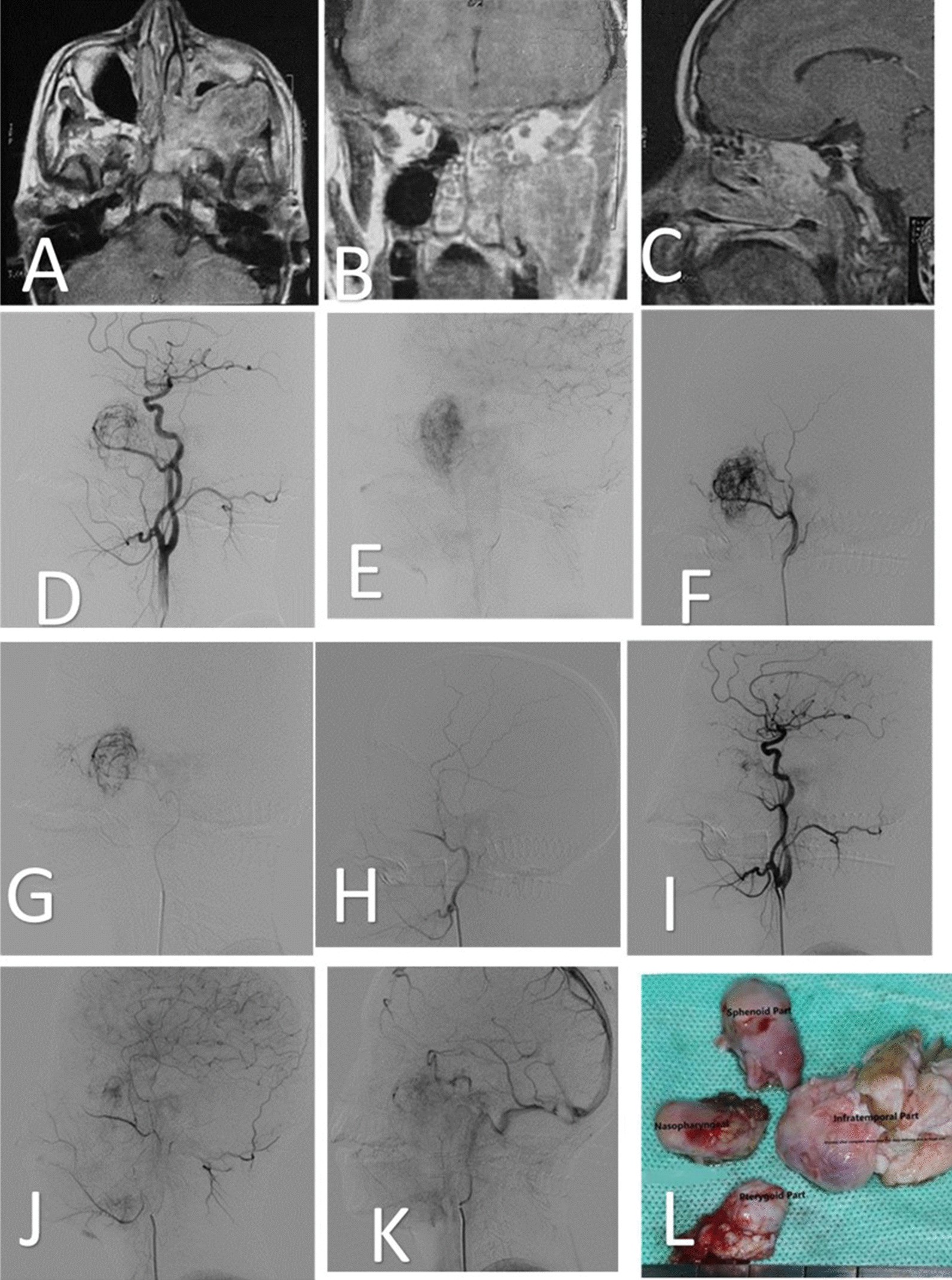 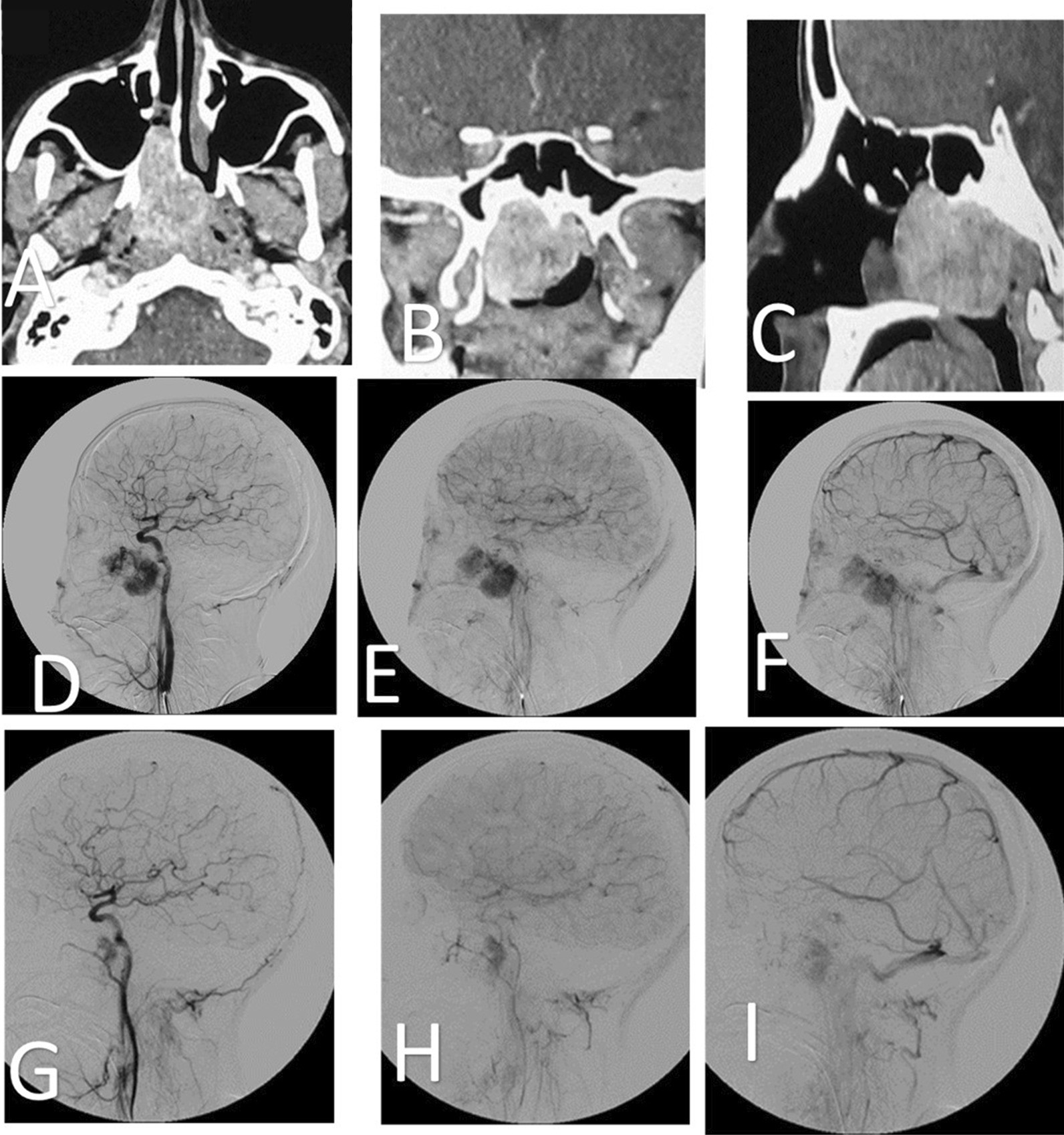 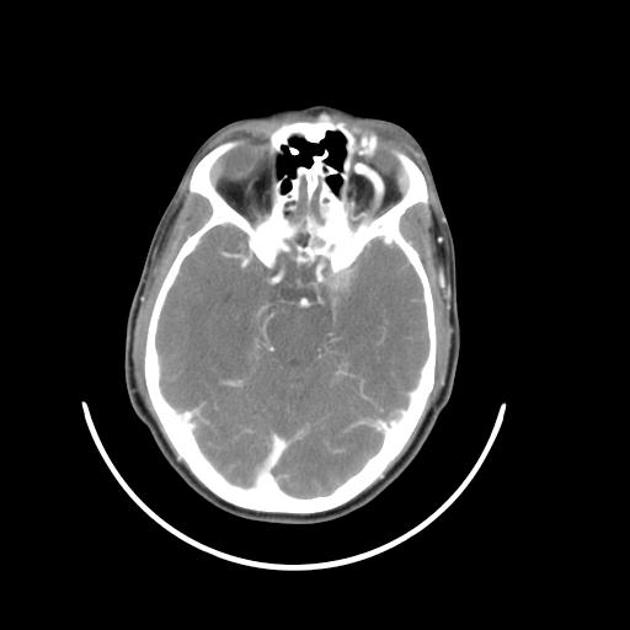 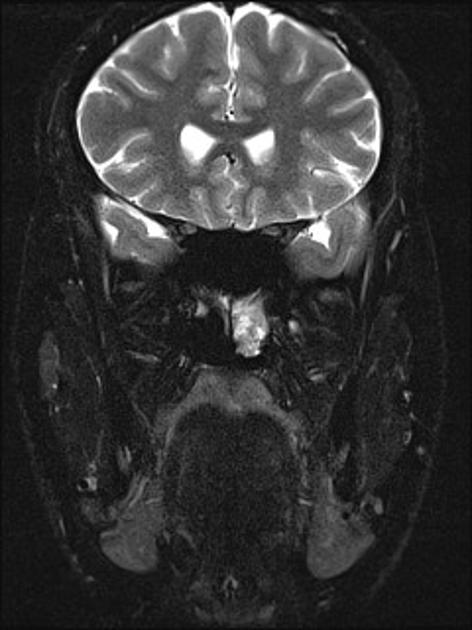 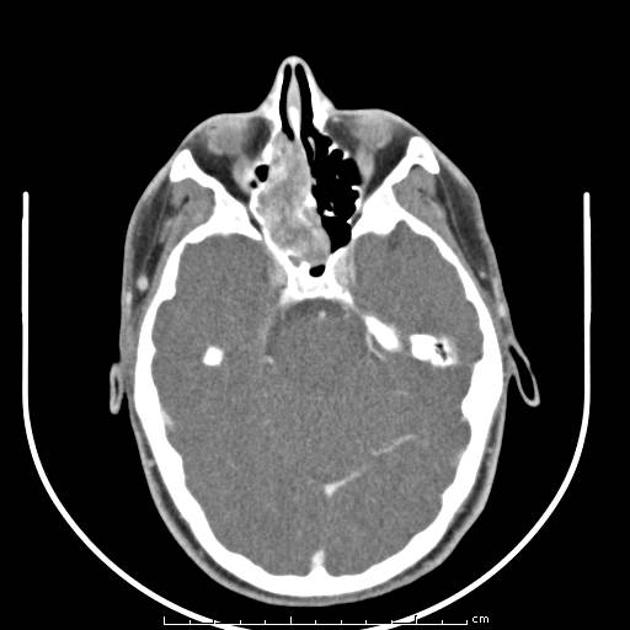 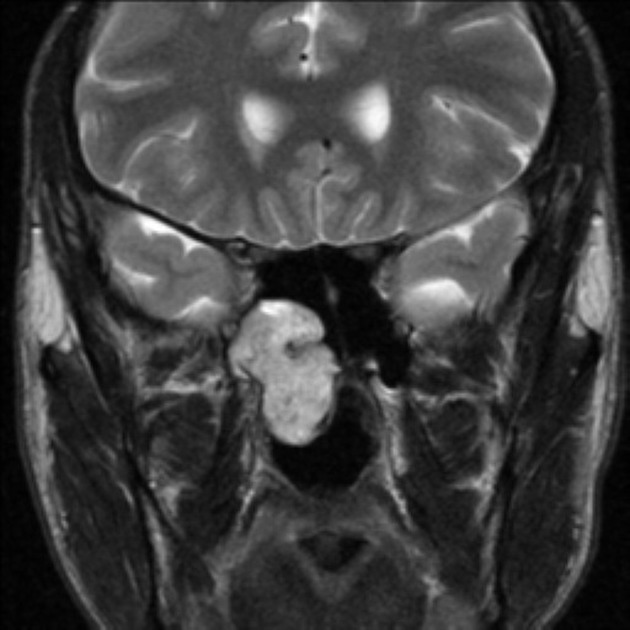 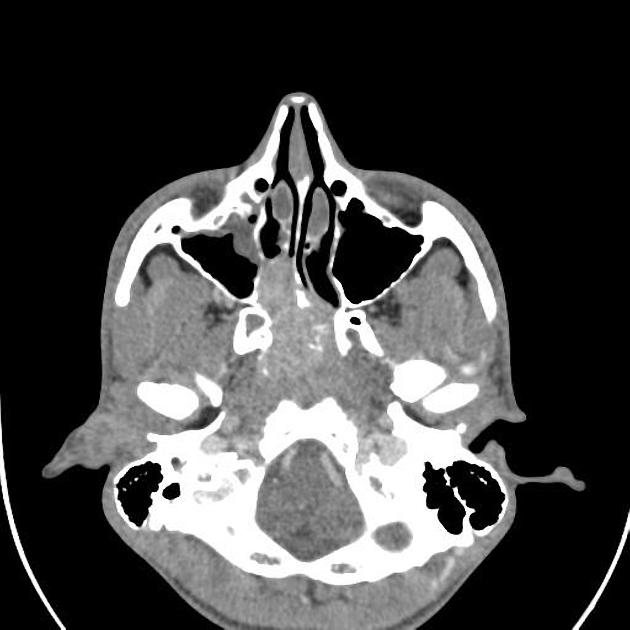 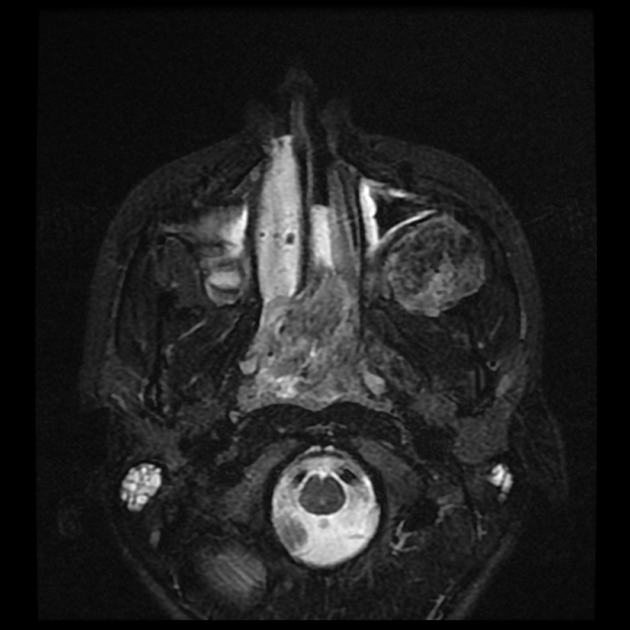 On imaging, they present as a vividly enhancing soft-tissue masses centered on the sphenopalatine foramen. Given its vascularity, prominent flow voids are seen on MRI leading to a salt and pepper appearance.

Juvenile nasopharyngeal angiofibromas occur almost exclusively in males and usually in adolescence (~15 years). They account for only 0.5% of all head and neck tumors  but are the most common of the benign nasopharyngeal neoplasms.

The presentation is typical with obstructive symptoms, epistaxis, and chronic otomastoiditis due to obstruction of the Eustachian tube. Patients may present with life-threatening epistaxis. On examination, it may be seen as a pale reddish-blue mass. It is, as the name suggests, very vascular and a biopsy can sometimes be fatal.

Juvenile nasopharyngeal angiofibromas are benign but highly vascular tumors. They may be locally aggressive.

The exact site of origin is contentious as these masses usually present when they have reached a considerable size. However, most authors agree that they arise from the posterior choanal tissues in the region of the sphenopalatine foramen.

Imaging plays an important role in diagnosis due to its vascular nature, as biopsies should be avoided due to the risk of brisk hemorrhage, as well as staging.

Although these masses are thought to arise from the region of the sphenopalatine foramen, they are usually sizable at diagnosis, frequently with extension medially into the nasopharynx, laterally into the pterygopalatine fossa and, over time, beyond into the orbit, paranasal sinuses, intracranial cavity and infratemporal fossa.

Plain radiographs no longer play a role in the workup of a suspected juvenile nasopharyngeal angiofibroma, however, they may still be obtained in some instances during the assessment of nasal obstruction, or symptoms of sinus obstructions. Findings include :

CT is particularly useful at delineating bony changes. Findings are similar to those described above. Typically a lobulated non-encapsulated soft tissue mass is demonstrated centered on the sphenopalatine foramen (which is often widened) and usually bowing the posterior wall of the maxillary antrum anteriorly. There is marked contrast enhancement following administration of contrast, reflecting the prominent vascularity.

Extensive bony destruction is usually not a feature, but rather bone is remodeled or resorbed. This feature may be helpful in differentiating from other more aggressive lesions. An intracranial extension can however occur.

Angiography, although not essential, is often useful in both defining the feeding vessels as well as in preoperative embolization. Supply of these tumors is usually via :

Of note, enlargement of feeding vessels is not a common finding .

MRI is excellent at evaluating tumor extension into the orbit and intracranial compartments.

The presence of prominent flow voids leads to a salt and pepper appearance on most sequences and are characteristic .

Surgical resection (either open or increasingly endoscopic) is the treatment of choice, usually performed after pre-operative embolization to help with hemostasis. The embolization may be performed up to five days before. Irradiation may be an option if surgery is not possible or only incomplete resection achieved .

In cases where there is skull base involvement, a high recurrence rate (up to 50%) has been reported .