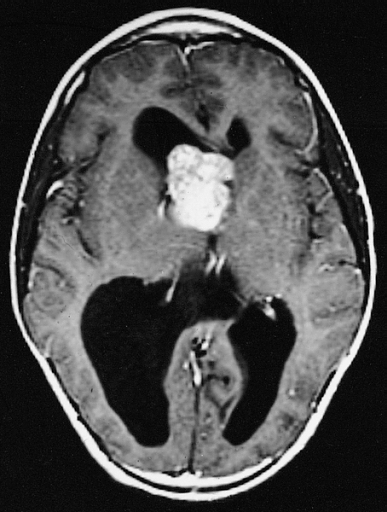 SUBEPENDYMAL
GIANT CELL ASTROCYTOMA (TUBEROUS SCLEROSIS) s of the type associated with en:tuberous sclerosis are typically bulky, contrast-enhancing masses in the region of the en:foramen of Monro. Most overlie the head of the en:caudate nucleus. Foramen obstruction has produced en:hydrocephalus.
Wikipedia • Public domain 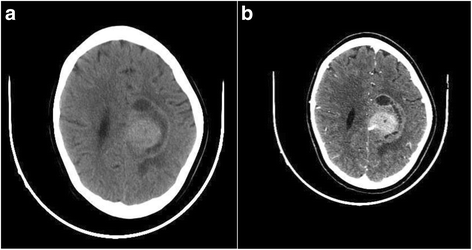 Subependymal
giant cell astrocytoma (SEGA): a case report and review of the literature. Computed tomography scan revealing a voluminous mass in the perilateral ventricle with similar attenuation to that of cortical gray matter (a), following administration of a contrast product, the mass showed marked enhancement (b)
jmedicalcasereports.biomedcentral.com • CC-by-4.0

Clinical and
imaging features of subependymal giant cell astrocytoma: report of 20 cases. a Nonenhanced CT image shows slightly hyperdense lesion with calcification at the right lateral ventricle adjacent to the foramen of Monro. Axial T1-weighted (b) MR images show the mass is well-defined with the ventricular dilatation, and the mass enhances strongly and homogeneously after the administration of Gd-based contrast agent
cnjournal.biomedcentral.com • CC-by-4.0 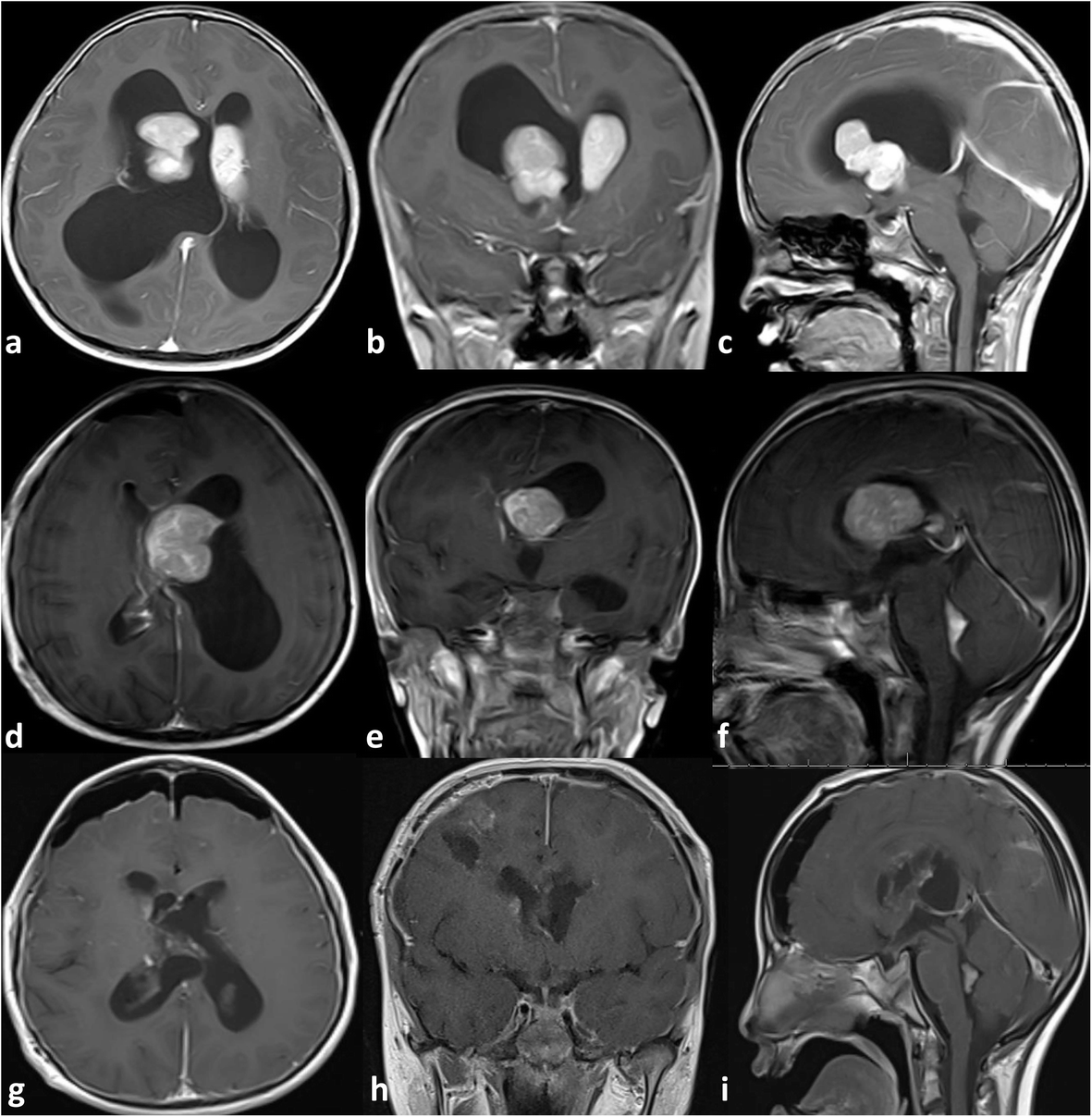 Transcortical
approaches to large intraventricular tumors: a prospective case series of 20 patients. Bilateral intraventricular sub-ependymal giant cell astrocytoma in an 8-year-old boy, who had generalized tonic-clonic convulsions. The patient had undergone an endoscopic biopsy and ventriculoperitoneal shunting, after which the seizures were controllable with medical treatment, and a decision of conservative management and serial follow-up imaging was taken. On 6-month follow-up, the seizures recurred and were difficult to control, and both tumors proved to have enlarged in size especially the right sided tumor. The right-sided tumor was surgically excised first through a right frontal trans-cortical approach, then the left-sided tumor was surgically excised in another session through a left frontal transcortical approach. a–c The initial axial, coronal, and sagittal contrast-enhanced brain MRI study. d–f Post-operative MRI following the first surgical session after excision of the right sided tumor which had enlarged during a 6-month follow-up period. g–i The final postoperative axial, coronal, and sagittal contrast-enhanced brain MRI study, which demonstrates total excision of both tumors. No CSF diversion was needed in this patient
EJNS.springeropen.com • CC-by-4.0 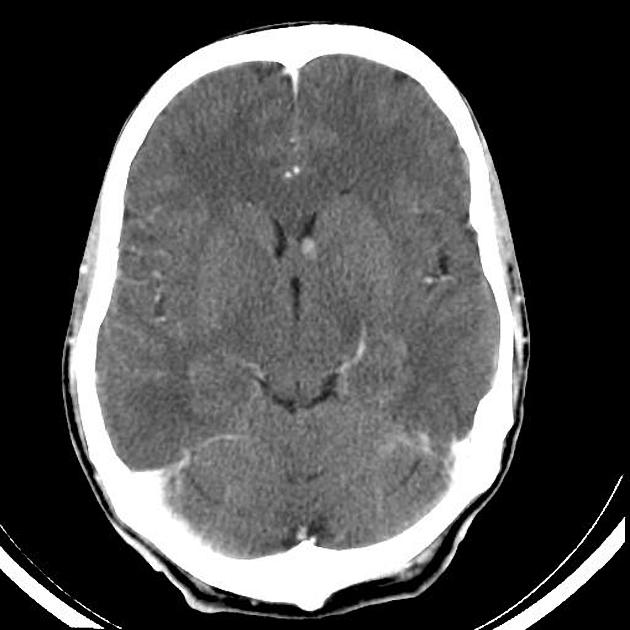 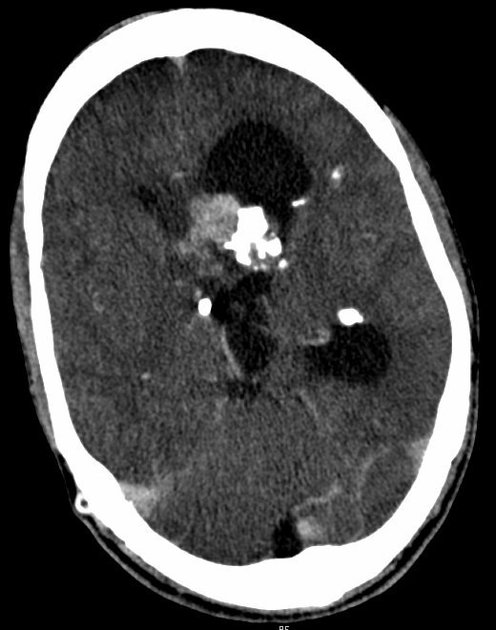 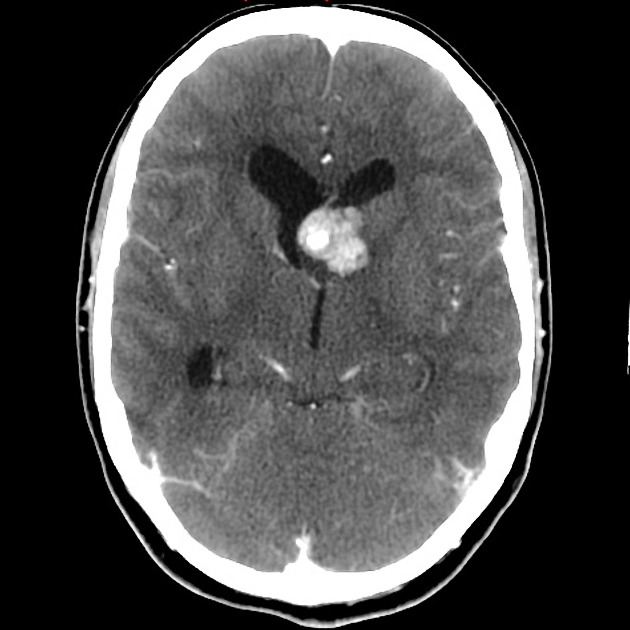 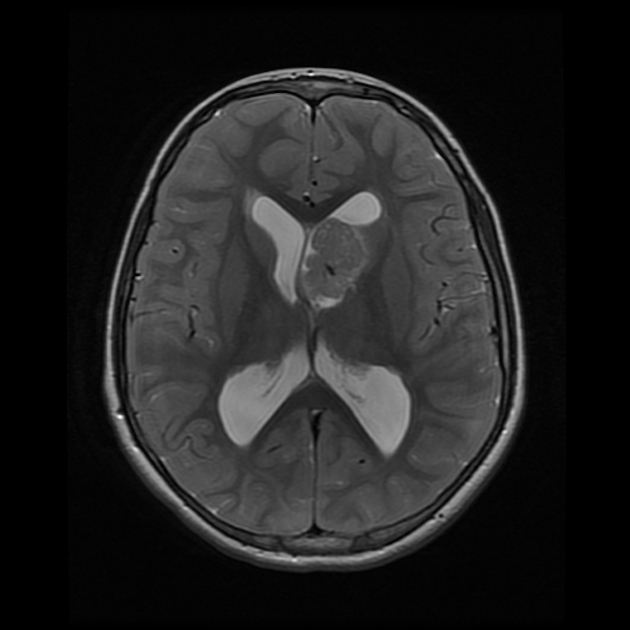 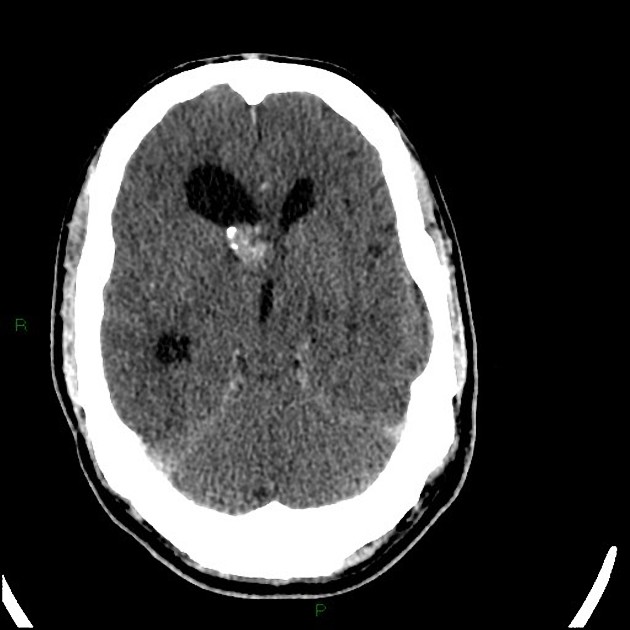 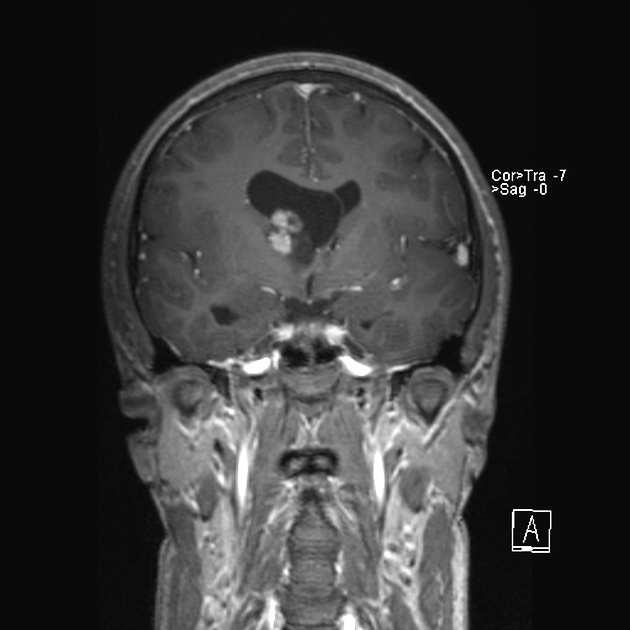 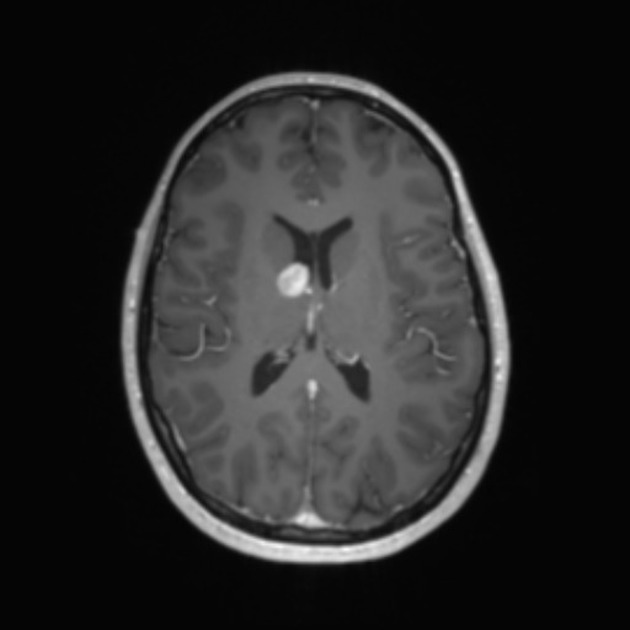 Subependymal giant cell astrocytomas (SGCAs or alternatively SEGAs) are benign tumors (WHO grade I), seen almost exclusively in young patients with tuberous sclerosis. They can be either asymptomatic or symptomatic due obstructive hydrocephalus, surgery treatment is often curative.

On imaging, they classically appear as an intraventricular mass near the foramen of Monro, larger than 1 cm, showing calcifications, heterogeneous MRI signal, and marked contrast enhancement.

Subependymal giant cell tumors are a well-known manifestation of tuberous sclerosis, affecting 5-15% of patients with the condition . They are principally diagnosed in patients under 20 years of age, only occasionally found in older individuals.

Subependymal giant cell tumors are often asymptomatic. When symptoms occur, they are usually a result of obstructive hydrocephalus because of mass effect around the ventricular system at the level of the interventricular foramen (of Monro).

Subependymal giant cell astrocytomas are considered WHO grade I lesions in the current (2016) WHO classification of CNS tumors .

These tumors are multilobulated well-circumscribed tumors arising from the wall of the lateral ventricles near the foramen of Monro. They frequently contain cysts and calcification .

Subependymal giant cell astrocytomas are believed to arise from a subependymal nodule present in the ventricular wall in a patient with tuberous sclerosis, although this has yet to be categorically established .

Current evidence suggests that they are of a mixed neuronal and glial lineage, although they continue to be classified as astrocytomas .

Immunohistochemical examination of these tumors demonstrates the following reactivity :

The foramen of Monro is the classic location, and the tumor arises when a subependymal nodule transforms into subependymal giant cell astrocytomas over a period of time.

Young children who have tuberous sclerosis may be offered to screen because of the increased risk of developing subependymal giant cell astrocytomas.

The main treatment is surgery, which is indicated if a tumor is symptomatic, or growth is demonstrated on MRI. Surgery is often curative. Oral sirolimus has also been trialled .

In the clinical context of known tuberous sclerosis, the appearance is virtually pathognomonic, and the main differential is between a subependymal nodule and a subependymal giant cell astrocytomas. Serial imaging is most helpful here, as growth implies the latter.

Other general considerations include: