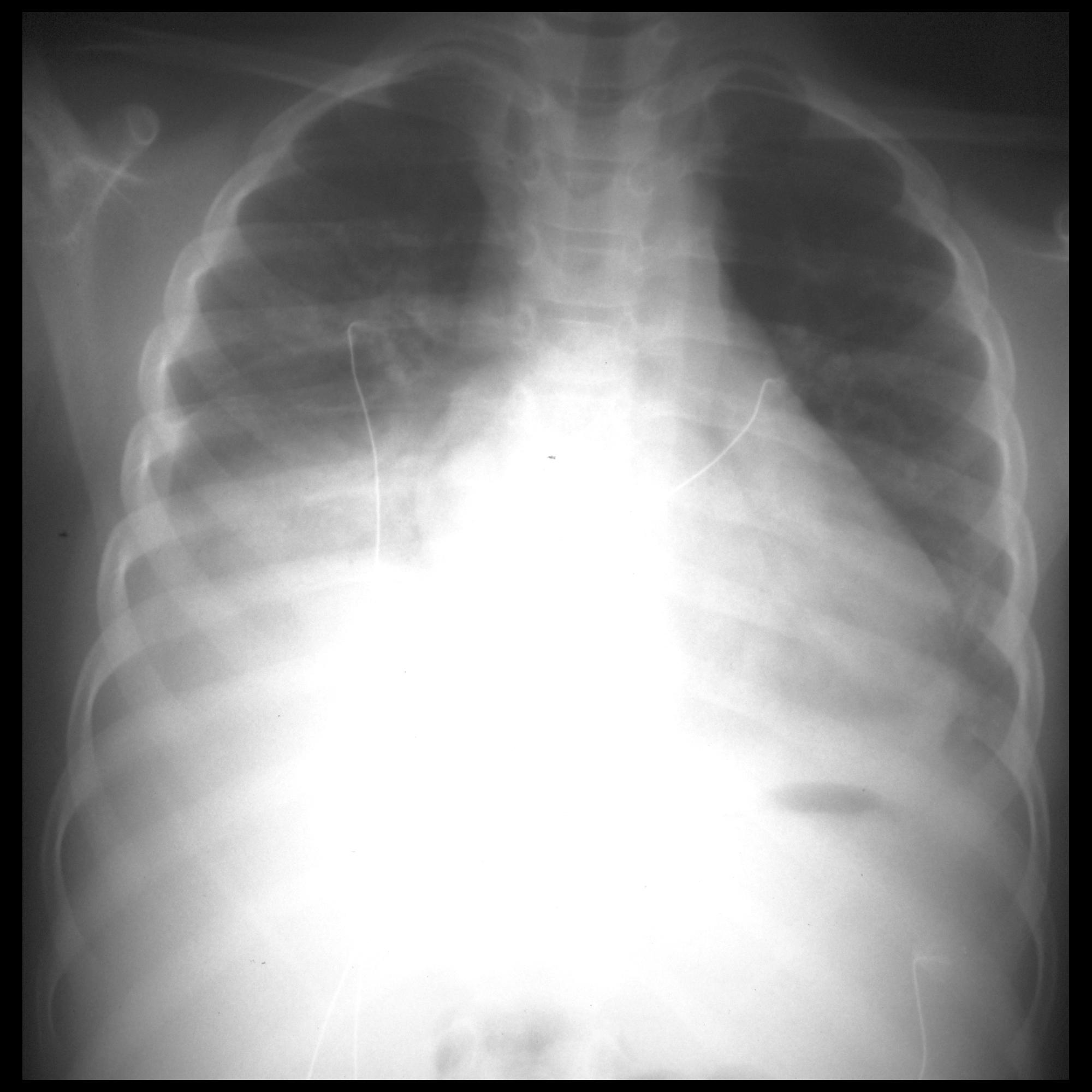 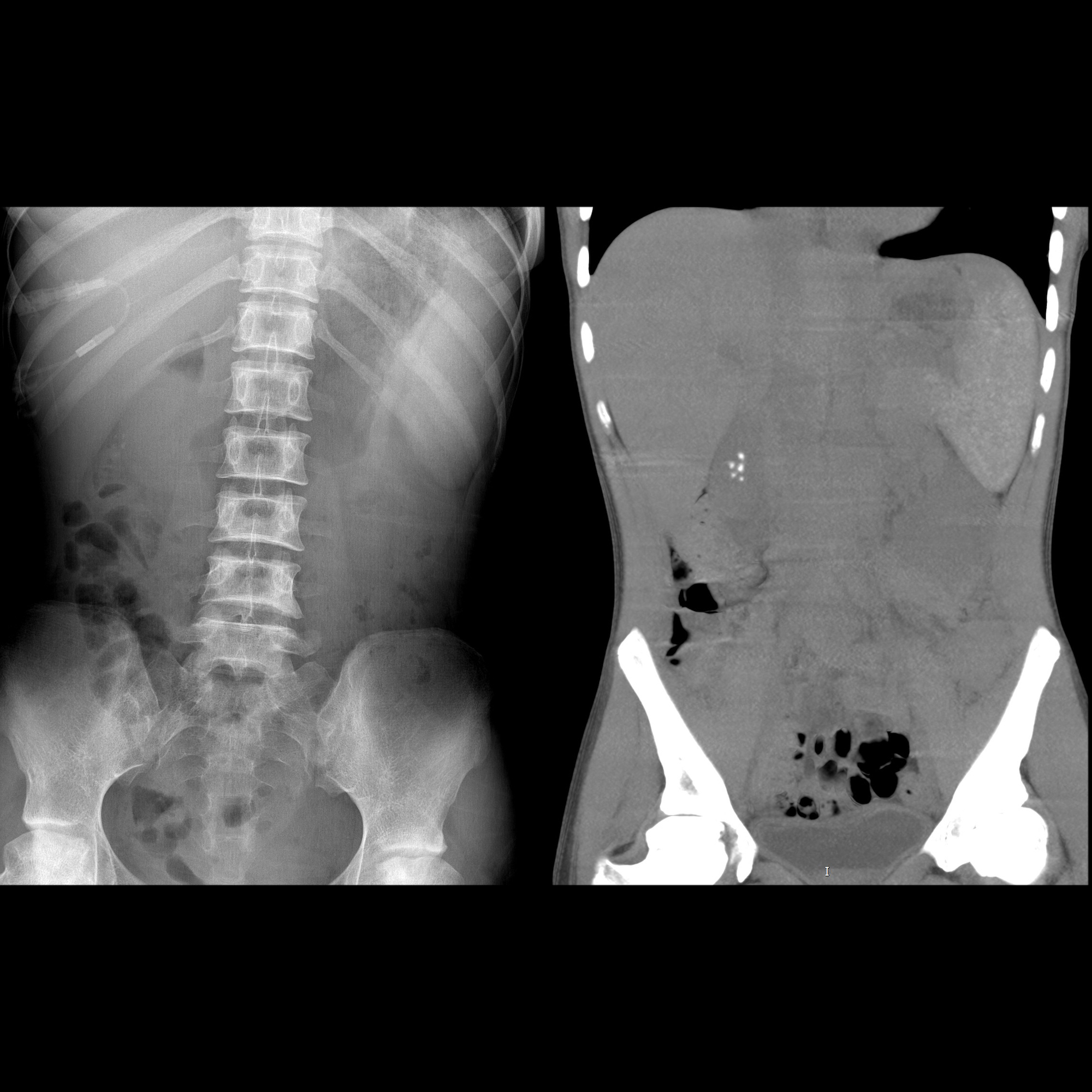 Teenager with
sickle cell disease and abdominal pain. AXR AP (left) shows faint calcifications in the right upper quadrant, just beneath the tip of the 12th rib and at the level of the L2 vertebral body which are better demonstrated on the coronal CT without contrast of the abdomen which demonstrates 5 calcifications within the gallbladder.The diagnosis was cholelithiasis in a patient with sickle cell disease.
pediatricimaging.org • CC-by-nc-sa 4.0 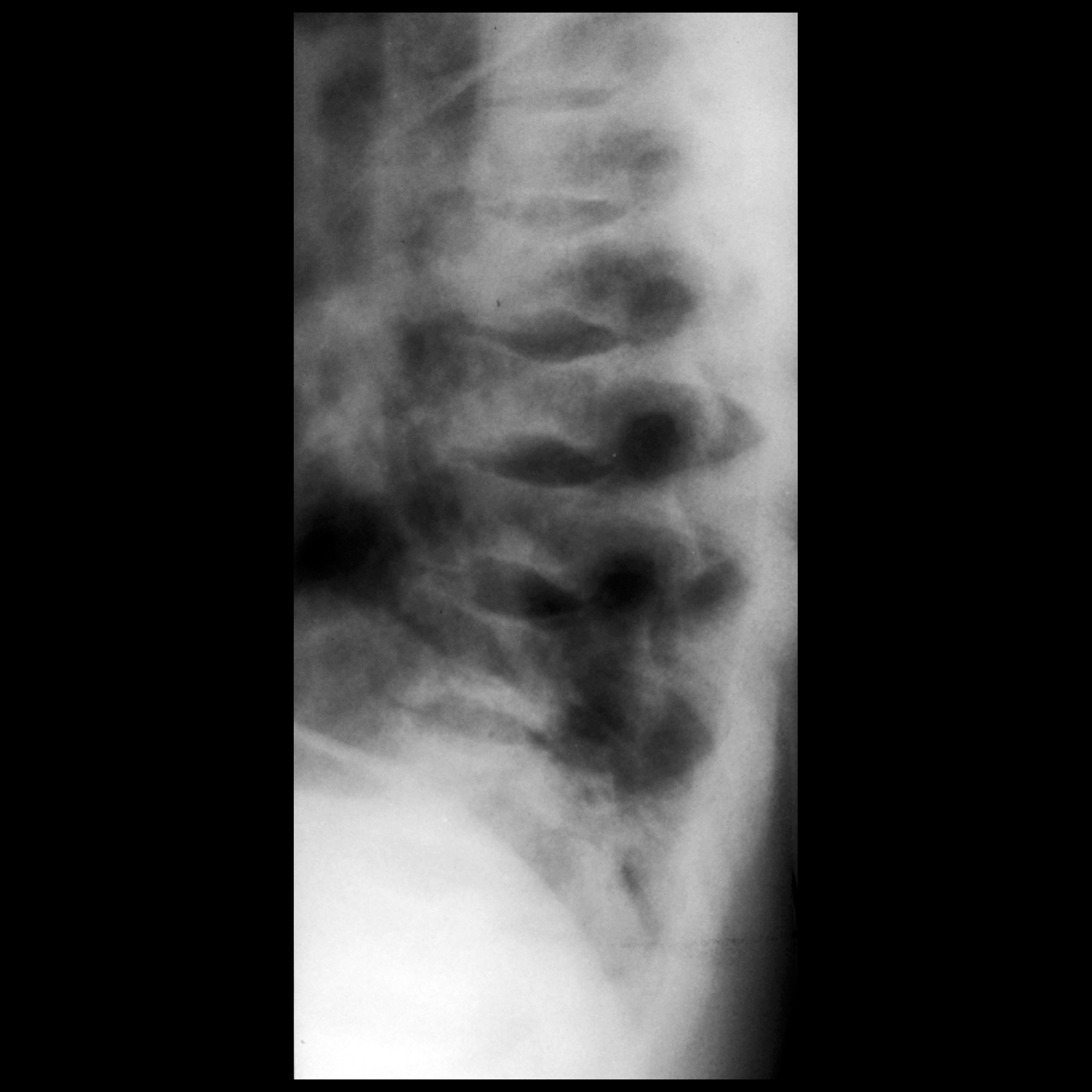 Computed
tomography of the spleen: how to interpret the hypodense lesion. Transverse contrast-enhanced CT images acquired during the portal venous phase. a A 43-year-old man with advanced sickle-cell disease. Note the irregular shape of the spleen, as well as the increased density of the splenic parenchyma, together with extensive calcifications as a consequence of constantly occurring micro-infarctions. b A 38-year-old man with sickle-cell disease exhibiting end-stage splenic involvement. Note the increased density, calcifications of the shrunken spleen
insightsimaging.springeropen.com • CC-by-2.0
Hallo!
Radiopaedia • CC-by-nc-sa 3.0 • de

Sickle cell disease (SCD) (historically known as drepanocytosis) is a hereditary (autosomal recessive) condition resulting in the formation of abnormal hemoglobin (a hemoglobinopathy), which manifests as multisystem ischemia and infarction, as well as hemolytic anemia.

Hemoglobin SC (HbSC) disease, although a sickle cell disease subtype, with similarities to the classic condition, should ideally be considered as a distinct pathological entity .

The term sickle cell disease is preferred to sickle cell anemia for the name of the condition, not least because the former term reflects the fact that the condition has multisystem effects, rather than just a severe form of anemia.

There is no recognized gender predilection. The highest incidence occurs in individuals of African descent, followed by eastern Mediterranean and Middle Eastern populations. Malaria is the strongest known selective pressure on the human genome. The sickle cell mutation is prevalent in part as it confers a human genetic resistance to malaria as the abnormal hemoglobin has higher turnover and increased phagocytosis while sickled red cells have reduced cell-cell cytoadherence preventing the parasite from multiplying during the erythrocytic phase of its life cycle. It is estimated that approximately 8% of the African population is homozygous for sickle cell (where malaria is most prevalent).

The earliest manifestation is usually in early childhood, as babies are protected by elevated levels of fetal hemoglobin (HbF) in the first 6 months . The first presentation is commonly a painful vaso-occlusive crisis: sudden onset of bone or visceral pain due to microvascular occlusion and ischemia, often in the setting of sepsis or dehydration. Sickle cell disease is known to have a wide spectrum of clinical presentations from completely asymptomatic to a severe overwhelming crisis.

Clinical findings are wide and include :

The disease results from a mutation in a gene coding for the beta chain of the hemoglobin molecule termed HbS. Specifically, there is a substitution of glutamine for valine at the 6th position in the beta-globin chain.

The term "sickle cell disease" applies to all patients who have two abnormal beta chains. The resultant hemoglobin molecules tend to clump together into long polymers, making the red blood cell (RBC) elongated (sickle-shaped), rigid and unable to deform appropriately when passing through small vessels, resulting in vascular occlusion. The abnormal RBCs are also removed from the bloodstream at an increased rate, leading to a hemolytic anemia .

Individuals with one HbS beta chain and one hemoglobin C (HbC) beta chain, have a subtype of sickle cell disease known as hemoglobin SC (HbSC) disease .

The radiographic manifestations of sickle cell disease are protean and are best discussed individually. Below is a summary of the main findings with links to individual articles.

These, in turn, can predispose individuals to other complications, such as growth disturbance and pathological fractures.

Pulmonary involvement is a leading cause of mortality among sickle cell disease patients and can be acute or chronic:

Extramedullary hematopoiesis is discussed separately. Less common in sickle cell disease than in other hemolytic anemias. The most common site is liver, followed by spleen, thorax, and adrenals .