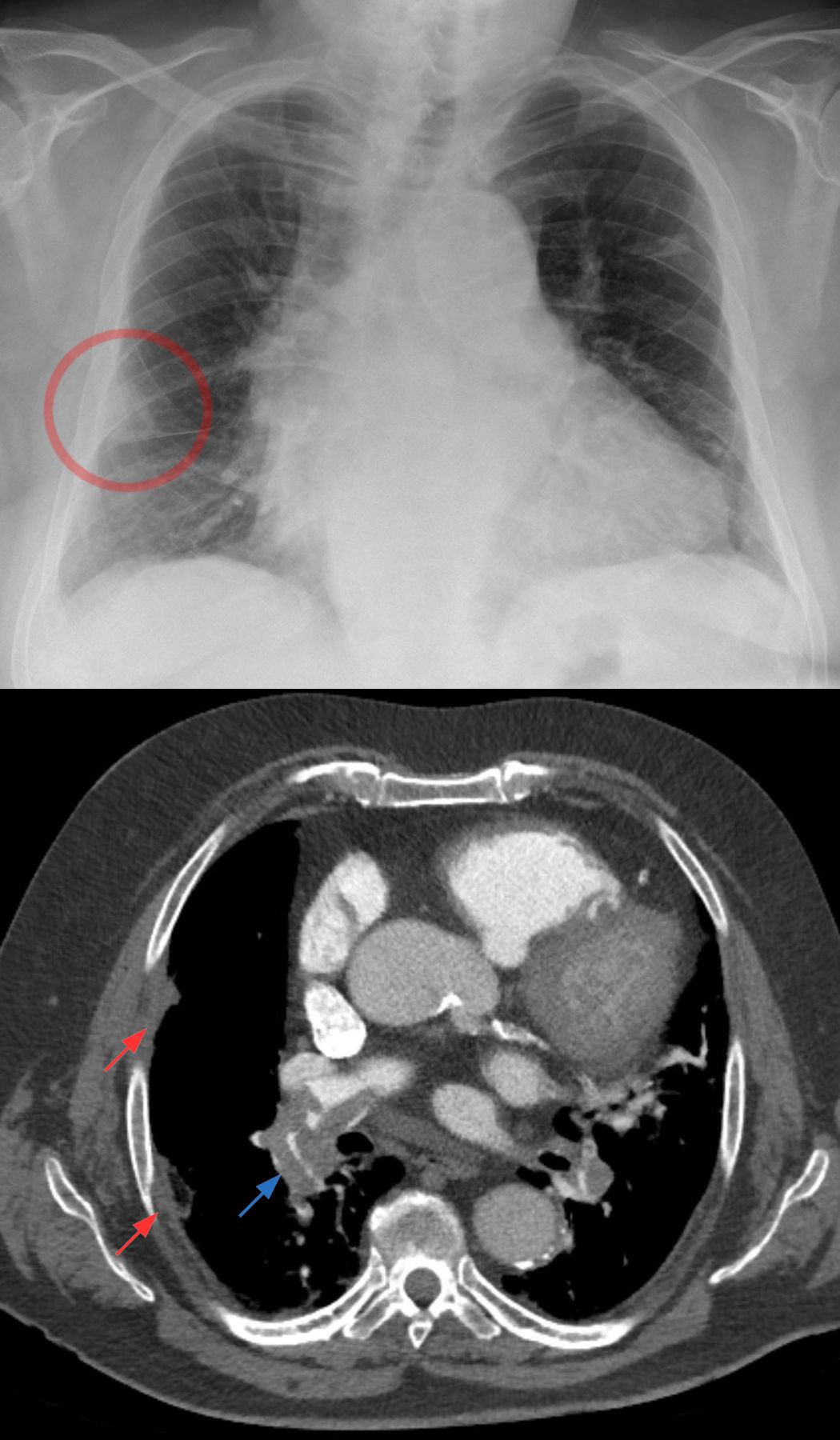 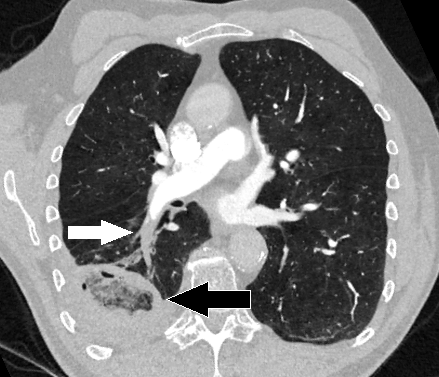 Thorax CT of
a 74-year-old man with a long-standing pulmonary embolism (having lasted 3 months) of the artery of the right lower lobe, secondary to a leg fracture, and with long-standing hemoptysis. It shows the embolism, as well as a pulmonary infarction (white arrow) seen as a reverse halo sign (black arrow). Further information: Reverse halo sign
Wikipedia • CC0 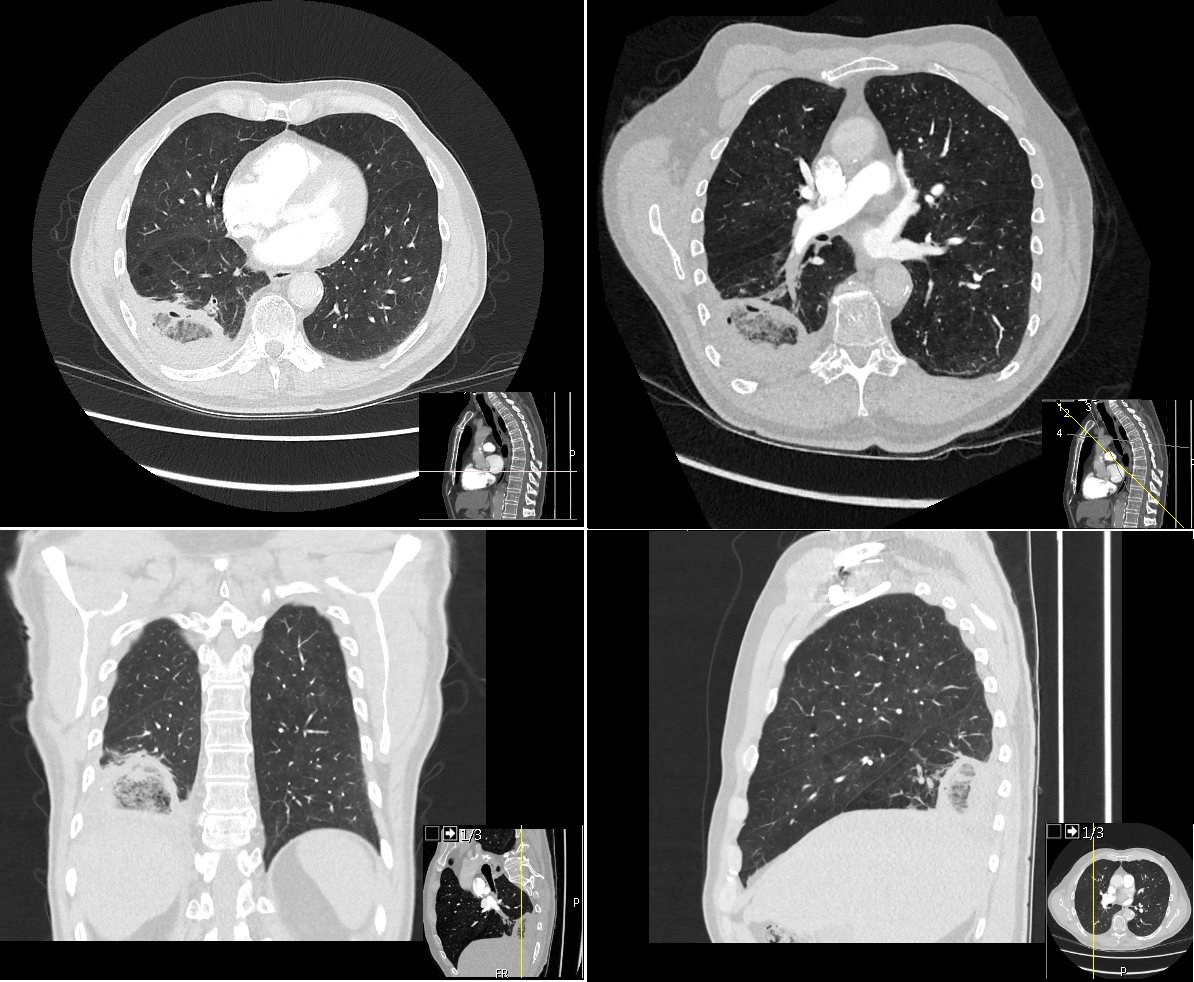 Thorax CT of
a 74-year-old man with a long-standing pulmonary embolism (having lasted 3 months) of the artery of the right lower lobe, secondary to a leg fracture, and with long-standing hemoptysis. It shows the embolism, as well as a pulmonary infarction seen as a reverse halo sign. Further information: Reverse halo sign
Wikipedia • CC0

Chest Spiral
CT (with and without contrast agent) showing multiples filling defects of principal branches, due to acute and chronic pulmonary embolism.
Wikipedia • CC BY 2.0 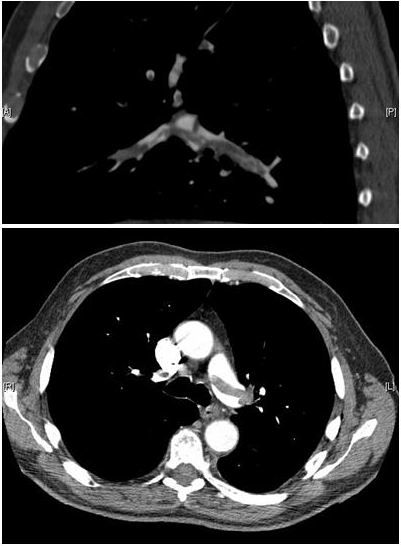 CT pulmonary
angiography images confirming the presence of a saddle embolus and substantial thrombus burden in the lobar branches of both main pulmonary arteries.
Wikipedia • CC BY 2.0

A large
pulmonary embolism at the bifurcation of the pulmonary artery (saddle embolism).
Wikipedia • CC BY-SA 3.0 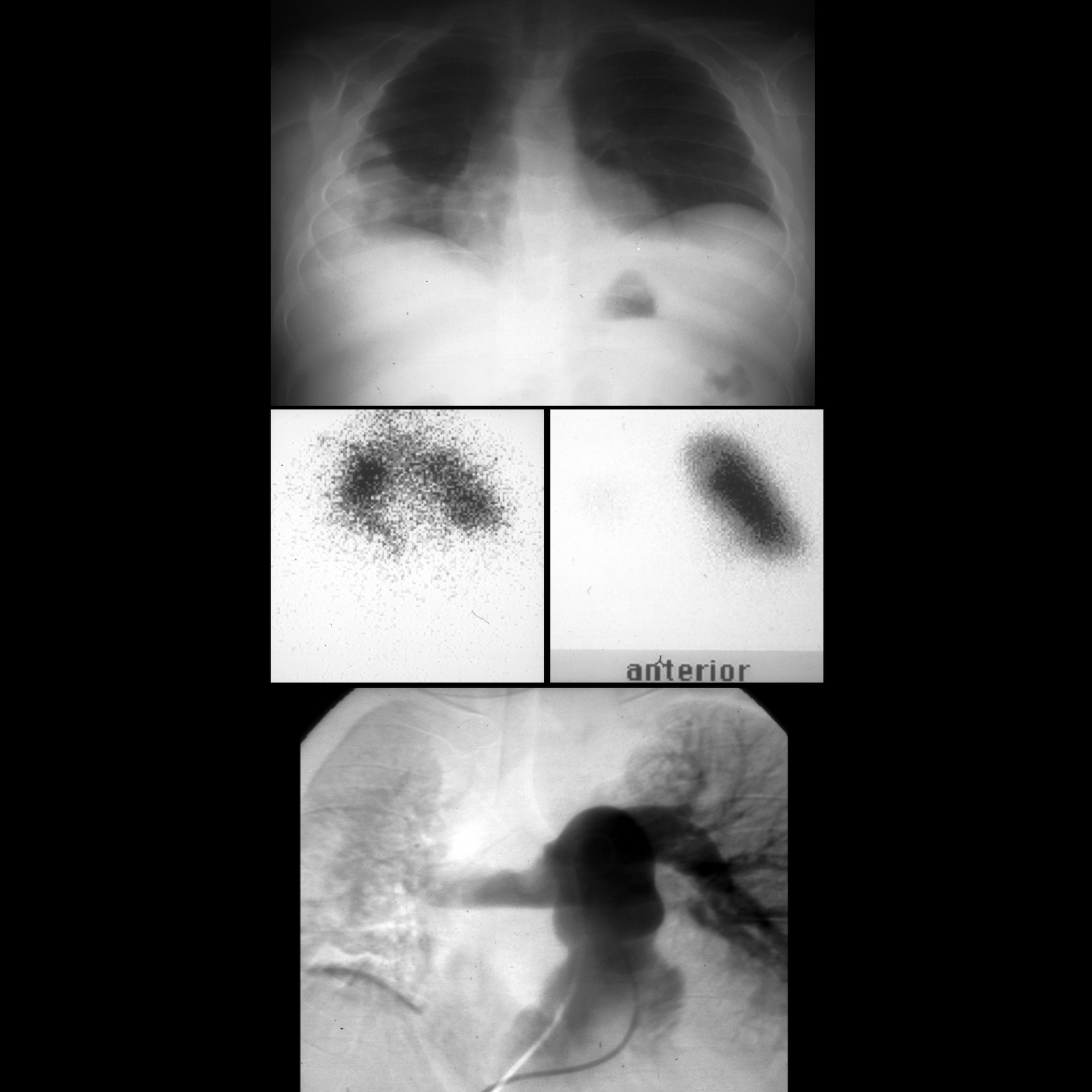 Pulmonary embolism (PE) refers to embolic occlusion of the pulmonary arterial system. The majority of cases result from thrombotic occlusion, and therefore the condition is frequently termed pulmonary thromboembolism which is what this article mainly covers.

Other embolic sources include:

Classification of a pulmonary embolism may be based upon:

The patient may report a history of recent immobilization or surgery, active malignancy, hormone usage, or a previous episode of thromboembolism. The physical exam may reveal suggestive features such as:

Clinical decision rules, in conjunction with physician gestalt and estimated pretest probability of disease, may serve as a supplement in risk stratification:

D-dimer (ELISA) is commonly used as a screening test in patients with a low and moderate probability clinical assessment, on these patients:

In patients with a high probability clinical assessment, a D-dimer test is not helpful because a negative D-dimer result does not exclude pulmonary embolism in more than 15%. Patients are treated with anticoagulants while awaiting the outcome of diagnostic tests .

Depends to some extent on whether it is acute or chronic. Overall, there is a predilection for the lower lobes.

Chest radiography is neither sensitive nor specific for a pulmonary embolism. It is used to assess for differential diagnostic possibilities such as pneumonia and pneumothorax rather than for the direct diagnosis of PE.

CT pulmonary angiography (CTPA) will show filling defects within the pulmonary vasculature with acute pulmonary emboli. When the artery is viewed in its axial plane the central filling defect from the thrombus is surrounded by a thin rim of contrast, which has been called the Polo Mint sign.

Emboli may be occlusive or non-occlusive, the latter is seen with a thin stream of contrast adjacent to the embolus. Typically the embolus makes an acute angle with the vessel, in contrast to chronic emboli. The affected vessel may also enlarge .

Dual-energy CT holds much promise for the diagnosis and prognosis of PE.

In contrast to acute pulmonary embolism, chronic thromboemboli are often complete occlusions or non-occlusive filling defects in the periphery of the affected vessel which form obtuse angles with the vessel wall . The thrombus may be calcified.

Point-of-care ultrasonography is currently not recommended for a haemodynamically stable patient with suspected pulmonary embolism. In the presence of hemodynamic compromise, echocardiography may be of value to assess for the presence of severe right ventricular dysfunction;

Echocardiographic features which may be suggestive include:

Of note, transesophageal echocardiography has a reported sensitivity of 80.5% and a specificity of 97.2% for ruling in acute pulmonary embolism after the detection of right ventricular overload on transthoracic echocardiography .

Again not recommended as part of first-line work up.

Cumulative damage from repeated embolic insults is a common cause of chronic thromboembolic pulmonary hypertension, which demonstrates a variable degree of the aforementioned signs, but with significantly higher right ventricular pressures, right ventricular hypertrophy and diastolic dysfunction, and a higher degree of tricuspid regurgitation.

It is difficult to obtain technically adequate images for pulmonary embolism patients using MRI. Magnetic resonance pulmonary angiography (MRPA) should be considered only at centers that routinely perform it well and only for patients for whom standard tests are contraindicated. Technically-adequate magnetic resonance angiography has a sensitivity of 78% and a specificity of 99% .

A ventilation/perfusion (V/Q) scan will show ventilation-perfusion mismatches. A high probability scan is defined as showing two or more unmatched segmental perfusion defects according to the PIOPED criteria.

Providing cardiopulmonary support is the initial treatment. Anticoagulation is provided in patients without risk of active bleeding. If the emboli are large or there is a large clot burden, thrombolysis is an option. In some cases, embolectomy or placement of vena cava filters is required.

The right ventricular failure due to pressure overload is considered the primary cause of death in severe PE .

Several studies report around 80% emboli resolving at around 30 days . According to one study, residual pulmonary obstruction at 6 months after the first episode of pulmonary embolism was shown to be an independent predictor of recurrent venous thromboembolism and/or chronic thromboembolic pulmonary hypertension .