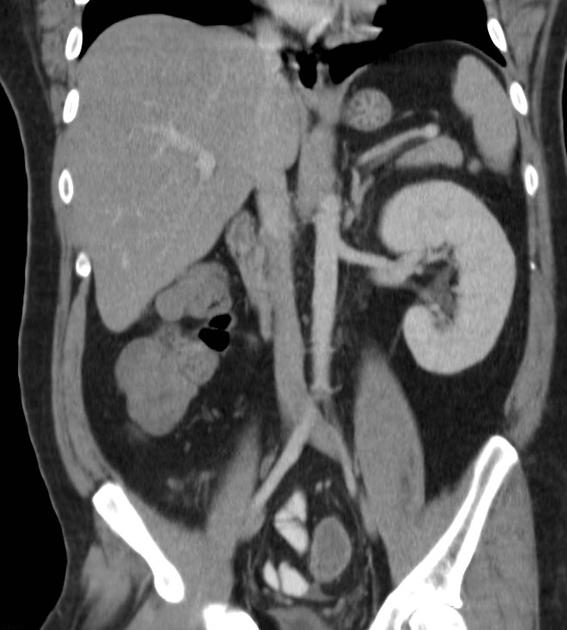 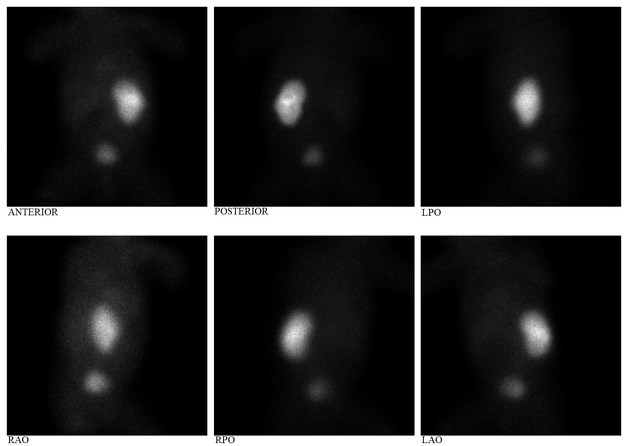 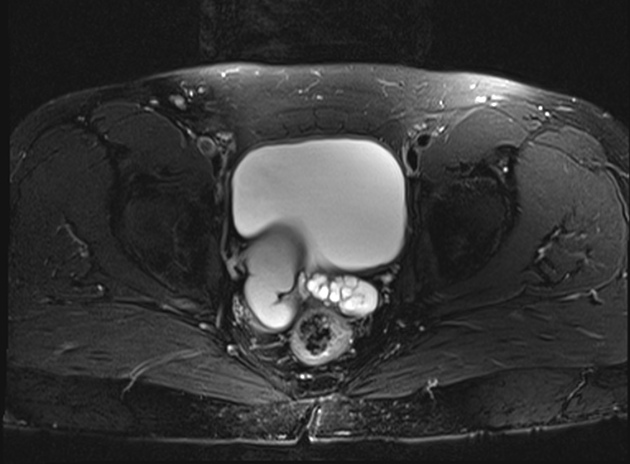 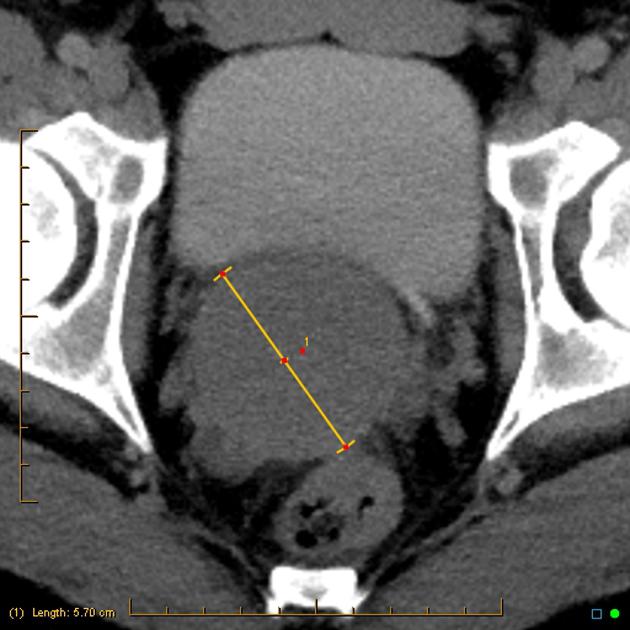 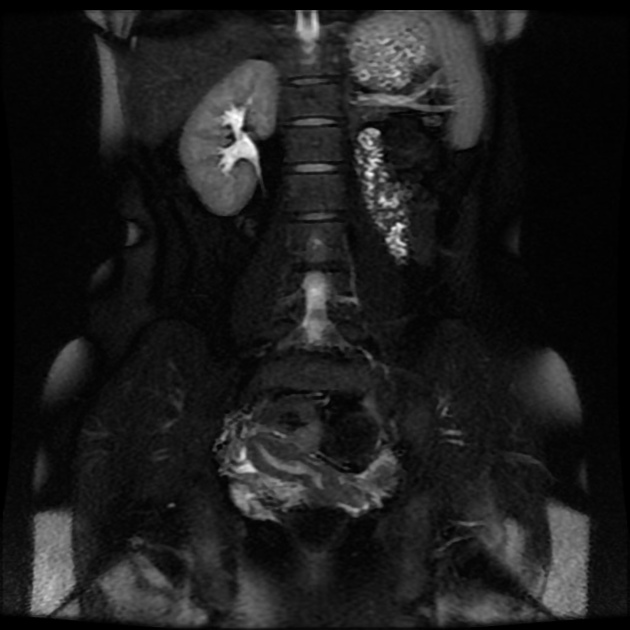 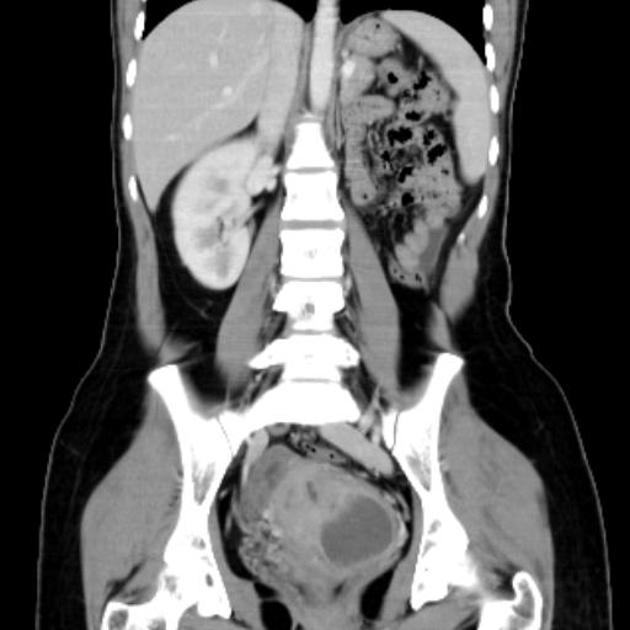 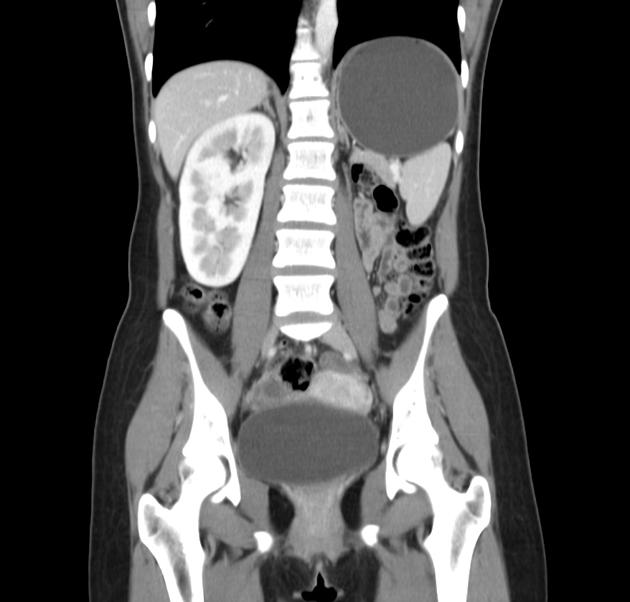 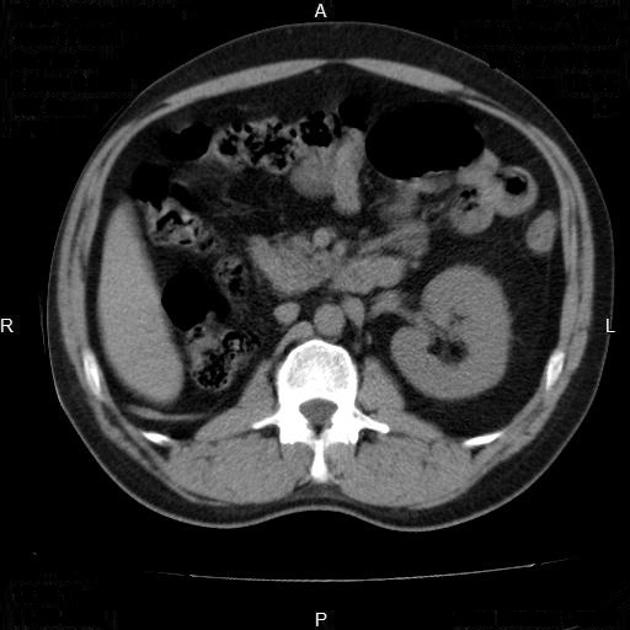 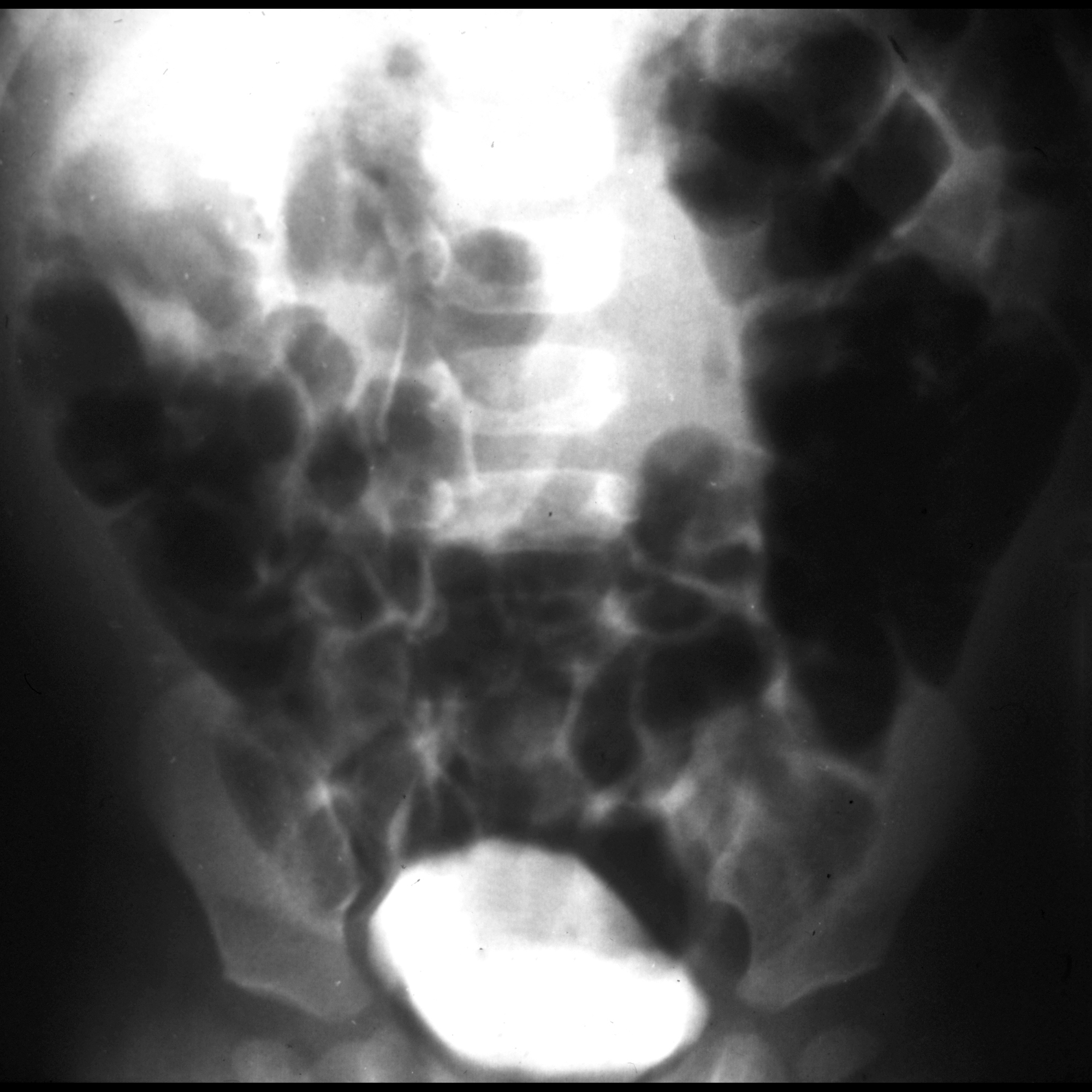 Infant with
suspected congenital anomaly of the urinary tract. AP image from the nephrogram phase of a vintage intravenous pyelogram shows a dense nephrogram in the right renal fossa representing the right kidney with contrast draining down the right ureter and filling the bladder. There is no nephrogram noted in the left renal fossa.The diagnosis was agenesis of the left kidney.
pediatricimaging.org • CC-by-nc-sa 4.0 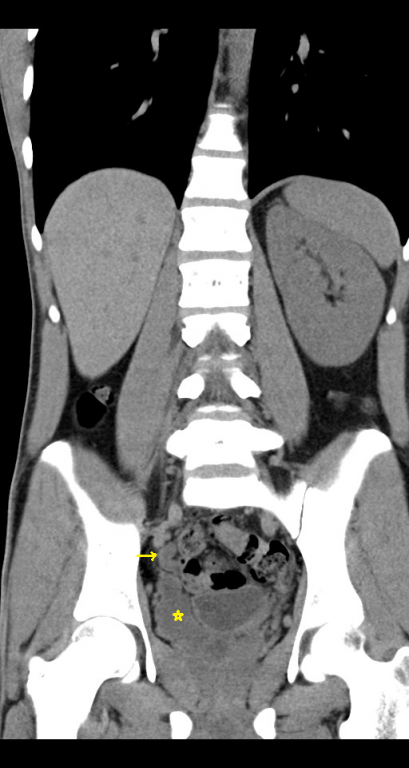 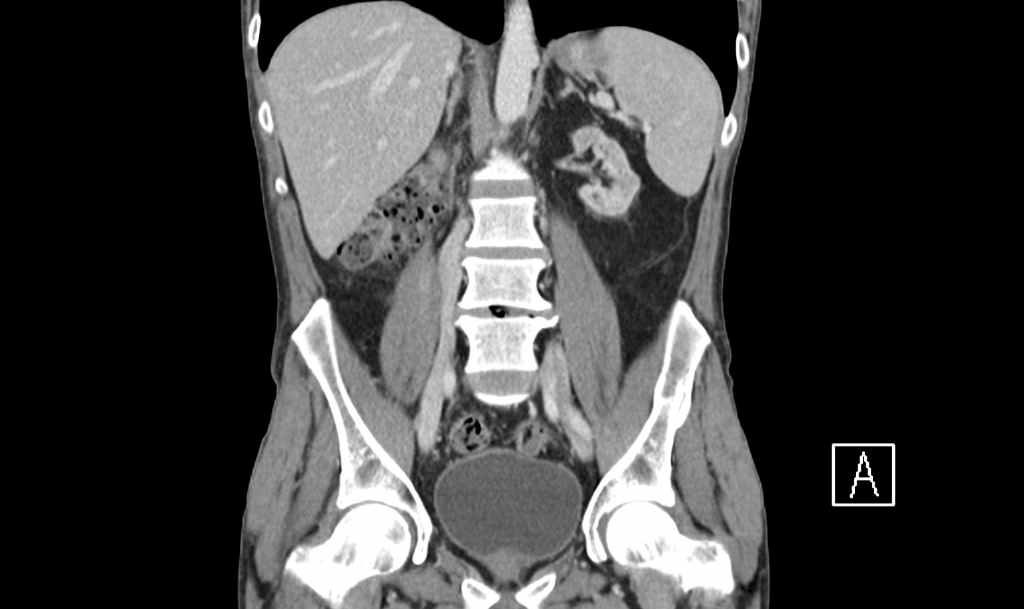 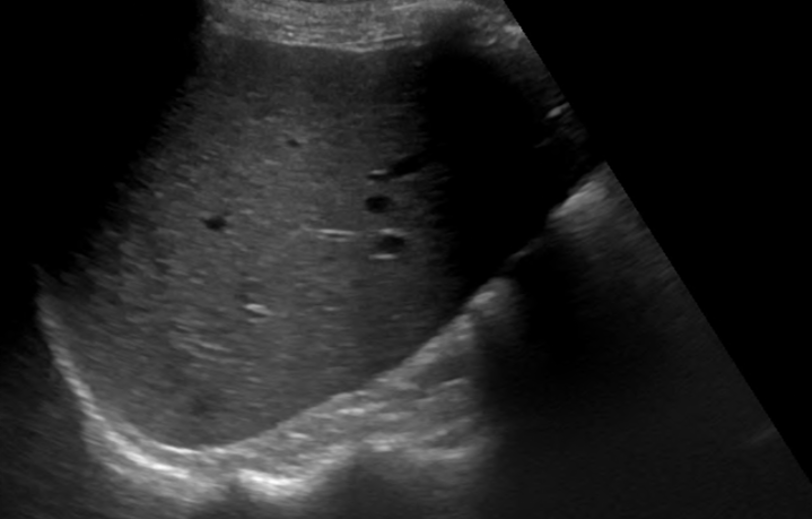 Congenital
seminal vesicle cyst in Zinner syndrome. The liver is shown. The right kidney is not seen in its usual location.
www.eurorad.org • CC by-nc-sa-4.0 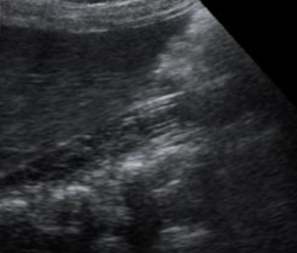 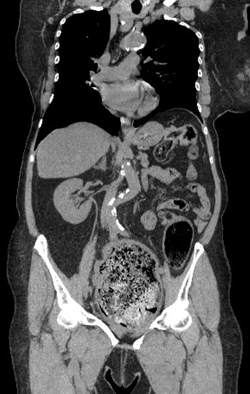 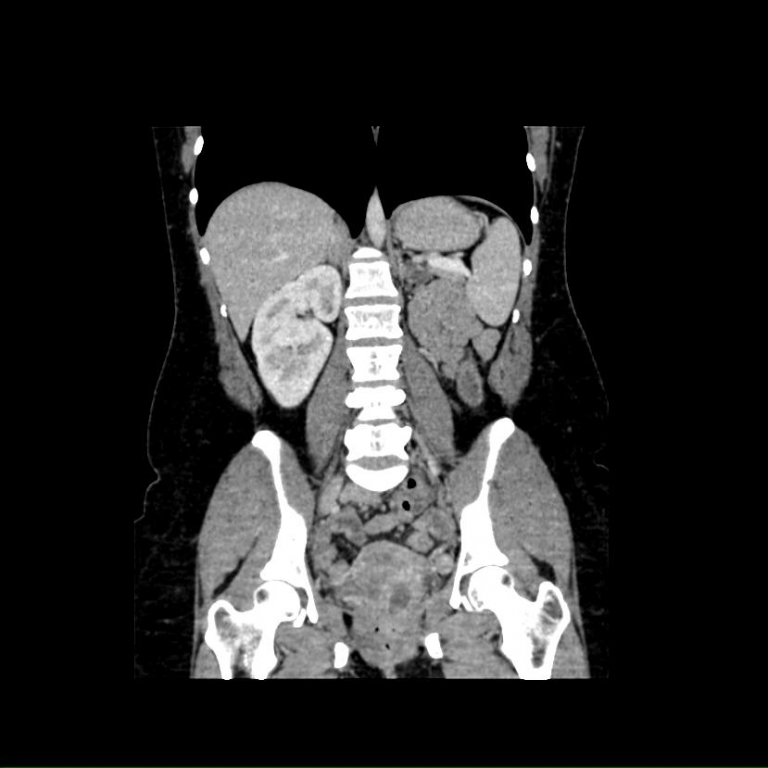 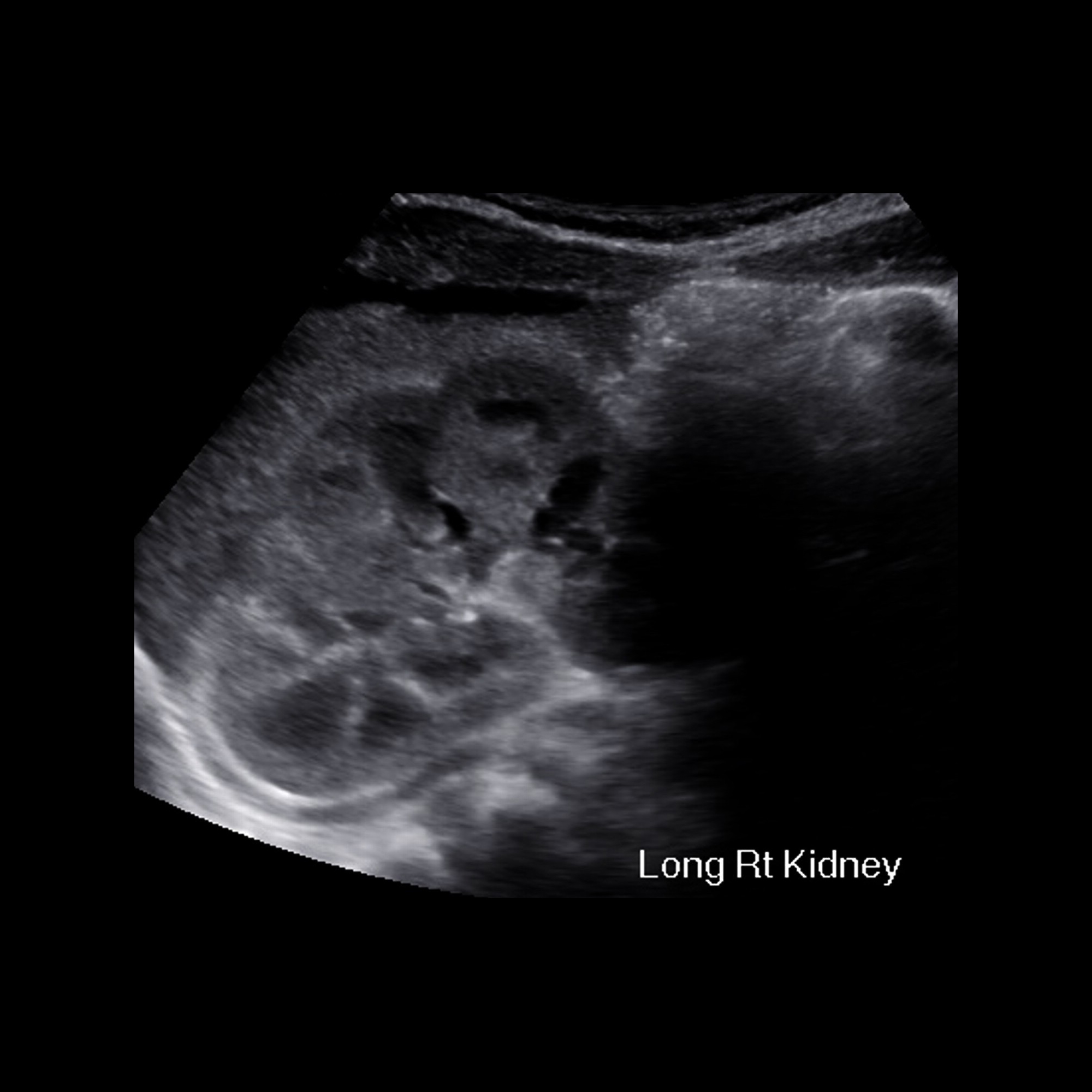 Newborn with
abnormal prenatal ultrasound. Sagittal US of the right kidney shows a lobulated renal contour along the anterior aspect of the right kidney. The left kidney was absent.The diagnosis was renal fetal lobulations in a patient with a solitary right kidney.
pediatricimaging.org • CC-by-nc-sa 4.0 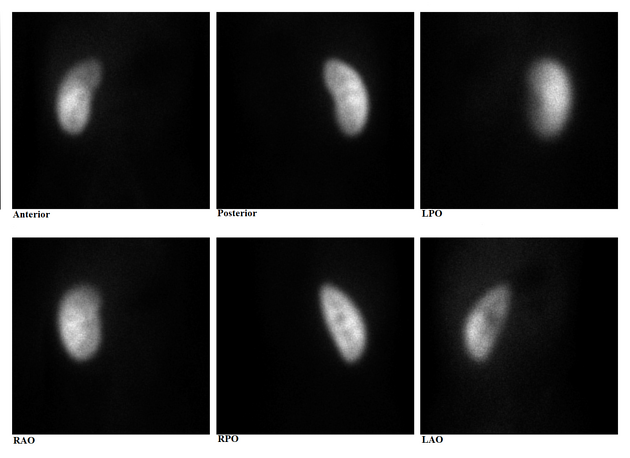 Renal agenesis refers to a congenital absence of one or both kidneys. If bilateral (traditionally known as the classic Potter syndrome) the condition is fatal, whereas if unilateral, patients can have a normal life expectancy.

If renal agenesis is unilateral and isolated then patients are asymptomatic. Unless identified on antenatal screening, then it is found incidentally when the abdomen is imaged for other reasons. Occasionally patients with unilateral renal agenesis, develop secondary hypertension.

Those with bilateral renal agenesis often have additional birth defects, both associated with, and a result of the absence of kidneys. With no kidneys, the fetus is unable to produce urine, which is necessary to form amniotic fluid resulting in anhydramnios. As a result, severe oligemia is present with the main resultant abnormality being pulmonary hypoplasia.

The etiology in many cases of renal agenesis is currently unknown but is thought to be multifactorial. An early vascular insult to the developing ureteric bud has been proposed .

Embryologically renal agenesis results from a failure of the proper development of the metanephros (the future definitive adult kidney) resulting in the complete absence of a renal structure. This is thought to occur at around early pregnancy (~6-7 weeks). Abnormalities in the mesonephros may result not only in renal agenesis (due to the absence of induction of the metanephros by the ureteral bud) but also internal genital malformations (due to the failure of the Wolffian and Mullerian duct to develop or to involute).

Renal agenesis can be associated with a number of chromosomal abnormalities including:

Unilateral renal agenesis may have other associated birth defects (most commonly, involving the genitourinary system). Such include:

Other associations with unilateral renal agenesis include:

With the widespread use of antenatal ultrasound, renal agenesis can be identified in utero, although the presence of normal amounts of amniotic fluid and urine in the bladder results in the diagnosis being frequently missed, unless specifically and routinely looked for. Features include :

If renal agenesis is bilateral then features are much more dramatic:

All imaging modalities will demonstrate the absence of a kidney, with the associated hypertrophy of the single kidney. Again, care must be taken not to misinterpret crossed fused renal ectopia for renal agenesis.

Most individuals with unilateral renal agenesis lead normal lives although there is an increased risk of renal infections, nephrolithiasis, hypertension and/or renal failure. No specific treatment is necessary.

Bilateral agenesis is lethal with pulmonary hypoplasia being the most common cause of death. Bilateral renal agenesis is said to carry a recurrence risk of 3% for sporadic cases.

It is important to differentiate between renal agenesis and a small atrophic kidney, and, of course, to ensure that the kidney is actually missing (i.e. check for a pelvic ectopic kidney or crossed fused renal ectopia).

Provided the remaining kidney is normal, and the other kidney is truly absent, then the only real differential is that of a previous nephrectomy.