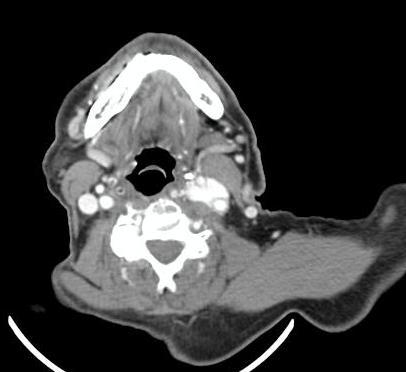 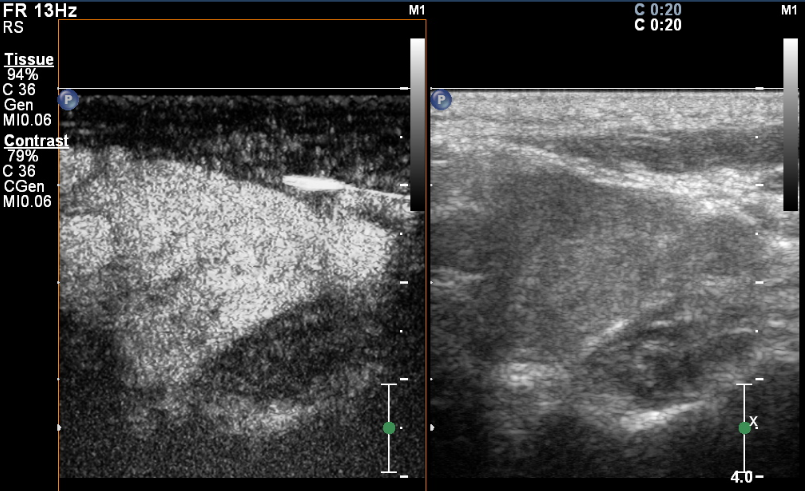 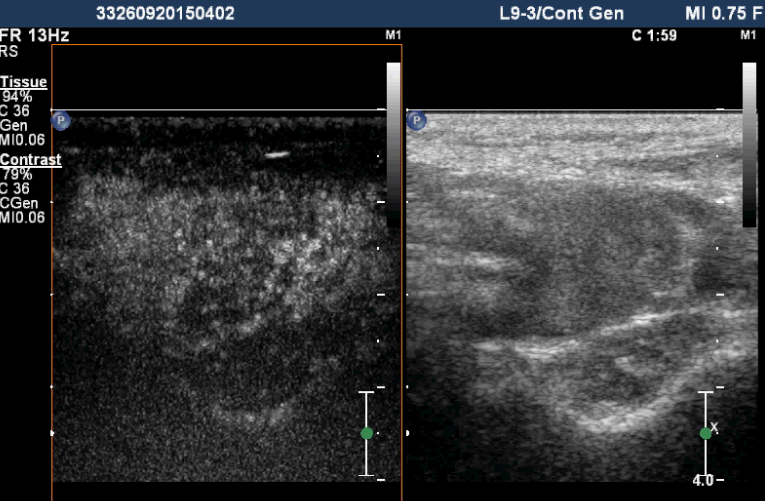 Paraganglioma
of the carotid body: correlation of CEUS and MDCT findings. CEUS: wash-out in the late phase
www.eurorad.org • CC by-nc-sa-4.0 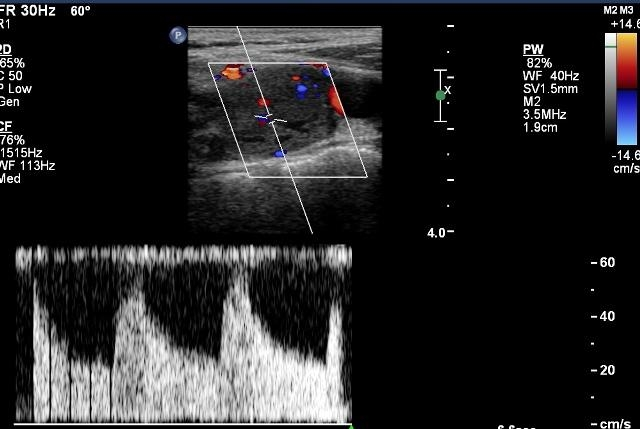 A small number are familial (7-10%), and in such cases, they are frequently multicentric (35-50%) . When familial, they are usually autosomal dominant in inheritance, and associated with :

Clinical presentation is usually with a slow growing rounded neck mass. It is usually located anterior to the sternocleidomastoid near the angle of the mandible at the level of the hyoid bone. Characteristically, the tumor can be moved side to side but not up or down, due to its location within the carotid sheath .

Cranial nerves that travel in the carotid sheath (glossopharyngeal, vagus, accessory and hypoglossal nerves) may be involved. Associated symptoms relate to their dysfunction .

These tumor may synthesize and secrete catecholamines, although this is less common than with adrenal paragangliomas (pheochromocytomas) .

The paraganglioma article includes a general discussion of the pathology of these tumors.

Carotid body tumors are located at the carotid bifurcation with characteristic splaying of the ICA and ECA, described as the lyre sign. In all modalities, the dense vascularity of these tumors is manifested as prominent contrast enhancement.

Contrast-enhanced CT is excellent at depicting these lesions. Typical appearances are:

The splaying of the carotid vessels (lyre sign) is again identified with an intense blush in tumor with and 'early vein' seen due to arteriovenous shunting .

The ascending pharyngeal artery is the main contributing supply.

Although not specific, shows uptake with metaiodobenzylguanidine (MIBG) and octreoscan scintigraphy and can be useful for assessing multiple lesions.

Surgical excision is the treatment of choice. The larger the tumor the higher the risk of operative complications . In patients for whom the risk of complications precludes surgery, radiotherapy may be considered .

Malignant transformation is encountered in 2-36% of cases with metastases most commonly to bone, lung and liver and regional lymph nodes .