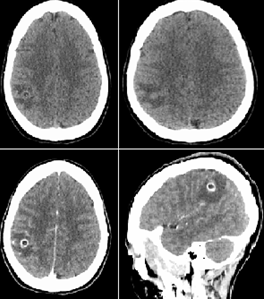 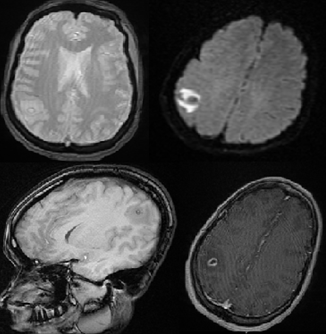 An aetiology
of late-onset epilepsy. Hypo-intense lesions on T1W and FLAIR and hyper-intense on T2WI. The eccentric nodule has a hypo-intense centre on T1W, T2W and FLAIR images, Peripheral rim enhancement of the lesion. Surrounding oedema
www.eurorad.org • CC by-nc-sa-4.0
Hallo!
Radiopaedia • CC-by-nc-sa 3.0 • de

Neurocysticercosis is caused by the CNS infection with the pork tapeworm Taenia solium, which is endemic in most low-income countries where pigs are raised. This form of cysticercosis is a relevant cause of seizures in endemic areas.

The disease is endemic in Central and South America, Asia and Africa. The perpetuation of this parasitic disease is related to poor sanitation and hygiene.

There is no gender or race predilection and most symptomatic patients are aged 15-40 years .

There is a variable time interval between the point of infection and the onset of symptoms (ranging from 1-30 years).

CSF serology may be helpful with the initial diagnosis especially in cases of intraventricular/subarachnoid infection .

Infection, which leads to extra-intestinal disease (including neurocysticercosis), usually occurs as a result of eating food or drinking water contaminated by human feces containing T. solium eggs. This is distinct from the 'normal' life cycle in which the undercooked pork is eaten and the larval cysts contained within, mature into adult intestinal tapeworm .

Extra-intestinal infection undergoes specific clinical and imaging changes at it progresses through four stages of infection .

Infection can be both intra- and extra-axial. Commonest locations are :

Typically the parenchymal cysts are small (1 cm) whereas the subarachnoid cysts can be much bigger (up to 9 cm): differential, therefore, being an arachnoid cyst.

Imaging findings depend on the location and stage of infection.

When in the subarachnoid space/interventricular, the cysts typically do not have a visible scolex. In the basal cisterns, they can be grape-like (racemose). The cysts are typically 1-2 cm in diameter . Usually, the cysts are similar in signal intensity to CSF, although occasionally cyst fluid may somewhat differ .

In the ventricles, there is often (79%) associated ventriculitis often leading to aqueductal stenosis and hydrocephalus .

Each stage has fairly distinctive imaging features although there is no sharp demarcation between later stages.