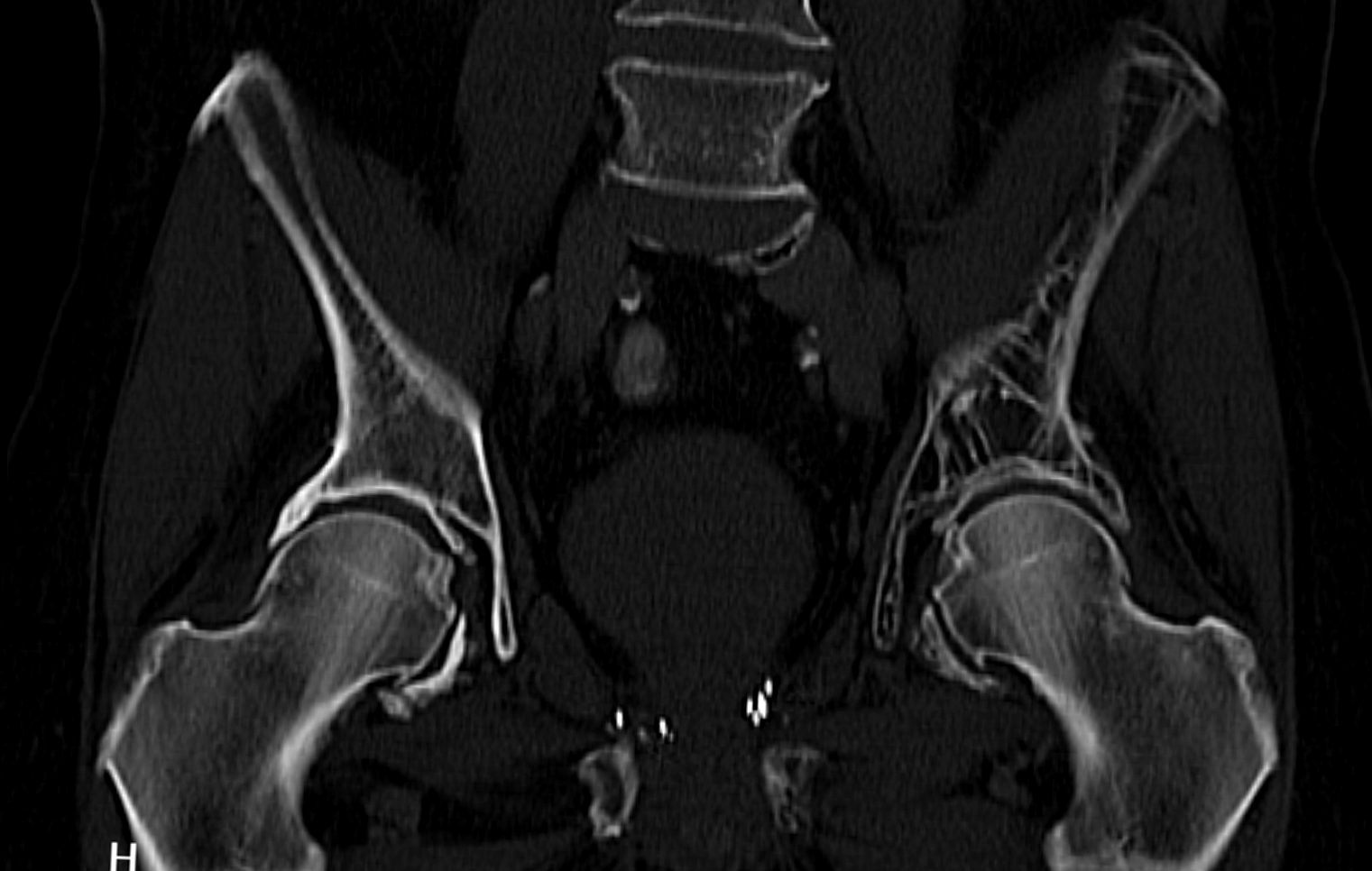 Paget"s
disease of right hip bone in an 80-year-old man. This is an edited version of the source image made for use in the "Anatomist" iOS and Android app and shared here under the terms of the source image"s Share Alike Creative Commons license.
Wikipedia • CC BY-SA 4.0 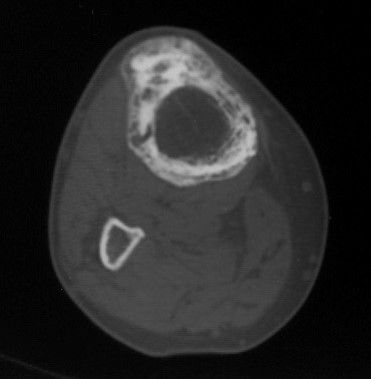 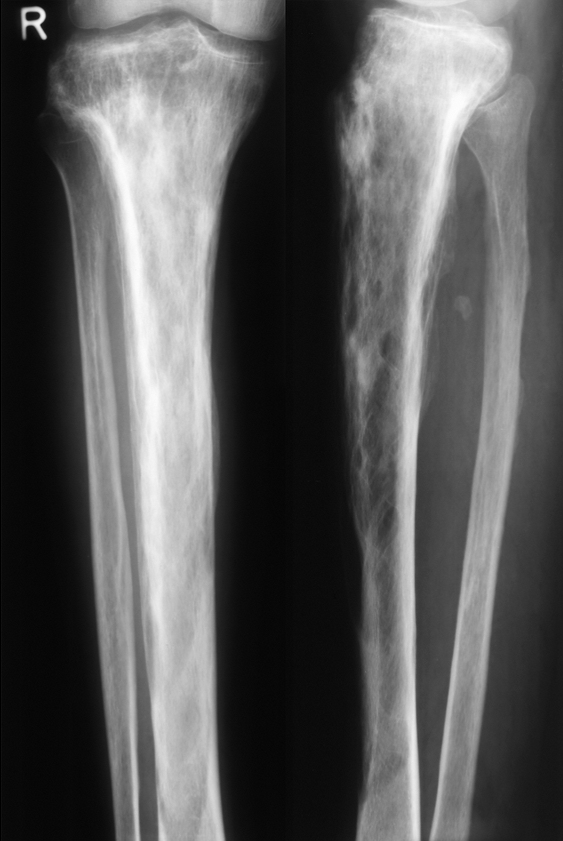 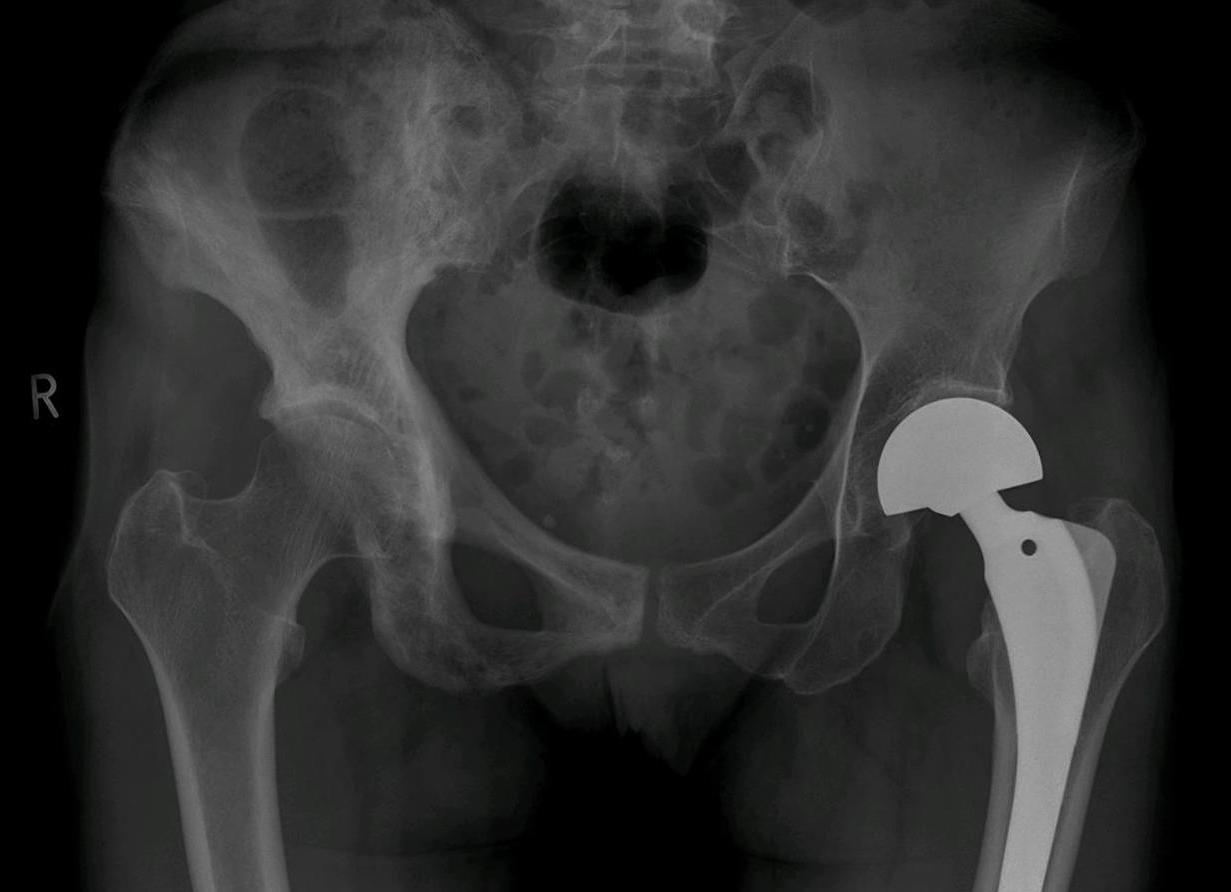 Paget disease of the bone is a common, chronic bone disorder characterized by excessive abnormal bone remodeling. The classically described radiological appearances are expanded bone with a coarsened trabecular pattern. The pelvis, spine, skull, and proximal long bones are most frequently affected.

It is relatively common and can affect up to 4% of individuals over 40 and up to 11% over the age of 80 . There may be a slight male predilection. Incidence can be considerably higher in the United Kingdom than in other countries. It is also common in Australia, New Zealand, Western Europe, and the United States.

The majority (approximately three-quarters) of patients are asymptomatic at the time of diagnosis. Presenting symptoms include:

Polyostotic disease is more prevalent than the monostotic type . The most frequent sites of involvement are:

The etiology is not entirely known, but it is a disease of osteoclasts. Viral infection (paramyxovirus)  in association with genetic susceptibility has been postulated.

There are three classically described stages, which are part of a continuous spectrum :

These stages correlate well with the imaging findings.

There are many Paget disease-related signs, listed here and described in the modality-specific sections below:

Plain radiographic features will depend upon the phase of the disease.

The early phase features osteolytic (lucent) regions which are later followed by coarsened trabeculae and bony enlargement. Sclerotic changes occur much later in the disease process.

These findings are often asymmetric, and for some reason, are more commonly seen on the right side.

The overall signal characteristics are variable, likely reflecting the natural course of the disease process in different phases.

Several major patterns of involvement have been described:

Fatty marrow signal is usually preserved in all sequences unless there is a complication .

Tc-99m-MDP is highly sensitive but not specific. It is useful to define the overall extent and distribution of disease.

Sir James Paget first described it in 1877 in a case report of a patient he had observed over some twenty years .

The condition was initially named by Paget "osteitis deformans", implying an inflammatory etiology. The term "osteodystrophica deformans" is now preferred.